Why would hydraulic calipers (not rotors) only be compatible with resin pads?

These calipers aren't supplied with rotors, so the answer to the very similarly titled What features make a disc brake caliper unsuitable for use with other than resin pads can't possibly apply.

Shimano MT200 brakes are listed by several dealers as compatible only with resin pads. I have some spare semi-metallic pads, and Shimano make metal pads that fit the form factor - so why aren't they compatible?

Since the question is phrased in the abstract and not with regard to one model, here is the abstract answer: While in general calipers offer a choice of pad compounds, calipers do differ in how well they manage heat, and there are various expense- and weight-adding design elements some calipers have that help them manage it much better than others. Metal pads in particular tend to go along with riding styles that involve sustained heavy braking. The kind of riding where the pros of metal pads outweigh the cons is also the kind of riding where hypothetically a manufacturer could see fit to say that recreational-level caliper model X is outside of its intended usage, and will be overly prone to fade, need frequent bleeding, and so on. In practice, manufacturers issue intended use guidelines for their brake models based on riding type and loads carried. I haven't seen any explicitly do it by saying a certain pad compound is incompatible.

Shimano likes to stick to a tech support and liability management strategy of saying "this caliper takes this model pad and can be used with these three rotors" and the like, even though there are other pads and rotors in their lineup that may be physically compatible in terms of form factor. For example: 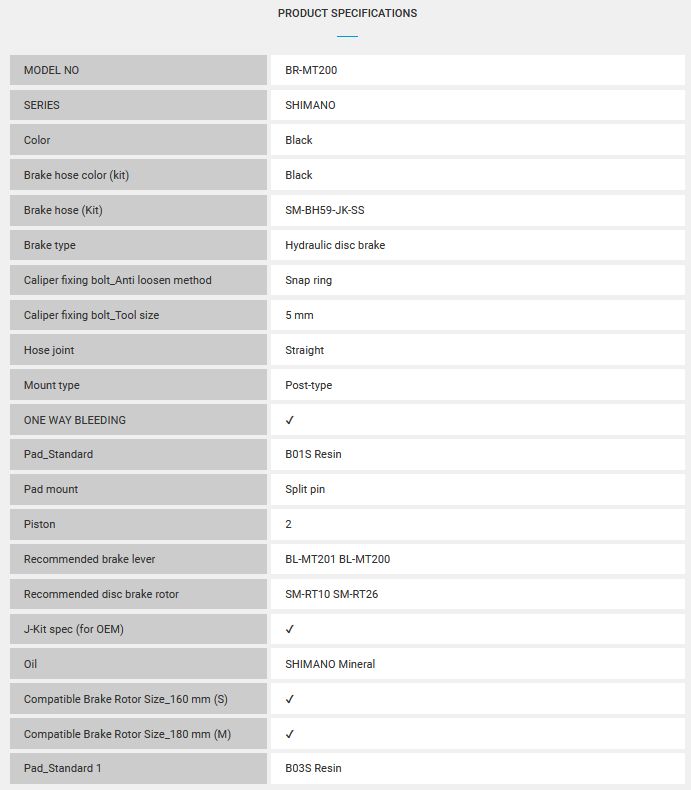 There are many other rotors, pads, and levers in the lineup that are physically compatible in practice, but these are the ones that are warranted and that they stand behind. It is easy as a consumer to criticize this practice and see cynical aspects to it, and it can be frustrating at times to deal with the world of bike parts compatibility as presented by Shimano because it often leads to a need to read between the lines just to make things work or do the right thing, especially when working with old parts, but one must also understand they've chosen to be in the business of selling bike parts systems that are designed to work together. That's simply their prerogative, and note also that while it may result in a lot of nuisances for people dealing with their parts out in the real world, they make almost all their money selling to bike brands who are speccing out bikes and need systems of parts that will just work, which is part of where the "X works with Y and Z and that's it" ethos comes from. Yes they have to counterbalance that against the risk of reputational damage from their prissiness about these issues, but it's self-evident that the balance they strike works for them.

BR-MT200 is a good example of a brake that hotrods pretty well but was still only developed and marketed as an entry-level, recreational product. If it does better than they may have expected under demanding conditions and people are pushing it hard with some success, that's not necessarily Shimano's "fault" and it still doesn't oblige them to recommend it as anything more than an entry level product. Some manufacturers have taken to speccing it on cargo ebikes, which I think is unwise and pushing everyone's luck too much, even though it mostly works out okay. In my opinion one of the things we're all just going to have to see about is how well they and other plastic-piston brakes hold up over time on such bikes, but the result will be interesting either way.

I've done exactly that - I've used metal pads in the BR-MT400 brake calipers. As a pretty heavy rider (93kgs) that rides lots of pretty steep descents (1000 meters vertical descend at 10km) I've had lots of problems with brakes that didn't work as good at the end of the descends as in the beginning.

So I've changed the pads to metal pads and first of all everything was better. But after a one of my most intense descends the caliper lost lots of oil. I am happy that this just happened after the descend when it was standing in my garage. The next time I drove the levers were mushy and I had to fill and bleed the brake.

After that everything worked fine again.

I've changed to semi-metallic pads (Jagwire Sport Semi-Metallic) and everything was fine again.

Still not happy with the perfomance of the brakes I've changed to 4 pod brakes and hope that this solved my brake problems.

tl;dr I've used metal pads with the BR-MT400 caliper and it looked like it overheated. After switching back to semi-metallic pads and bleeding the brake everything worked fine again. So I'd say that these calipers are not able to handle the increased heat that can occur if you're using metal brake pads

While "heat generation is likely to be pretty much the same", heat distribution is likely quite different. The thermal energy is far from equally divided between a resin brake pad (and ultimately the caliper) and the rotor.

With a resin pad, the rotor likely takes most of the heat, sparing the caliper from overheating. Nicer calipers have what looks like a built-in heatsink, even if they are not declared as such. The rotor is already a natural heatsink. The surface that was most recently heated has moved on and is now in contact with air to cool down. Since it will be cooler when it comes around to the pad, and since the low thermal coefficient of a resin pad would not have enabled it to move the heat away too quickly, the rotor will be the one to absorb most of the generated heat. Some rotors have (what is declared to be) a heatsink. They would be a better bet for use with metal pads, if perhaps only marginally because they cease to be a heatsink for the calipers once the brake lever is released. (The only trouble perhaps is that on long descents you wouldn't be able to choose between quick-and-hard braking and long-and-mild braking.)

Not the answer you're looking for? Browse other questions tagged hydraulic-disc-brake or ask your own question.