wrench stuck on right side pedal 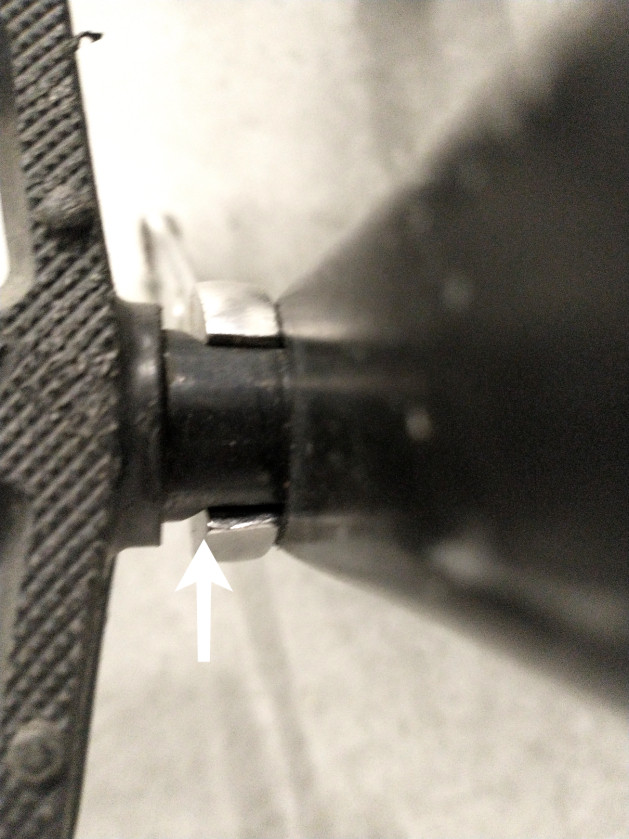 There are a thousand and one questions and answers, on as many different websites, if your pedals, cranks, or any other part is stuck are stuck. What I cannot find, is advice for my having gotten my 15mm open ended wrench STUCK - pinched between the crank arm and the pedal spindle. It's on the flattened parallel sides, where it belongs, and it has not rotated at all, so it's not stripping and rounding off that crisp edge. Rather, what has happened is that as the threads screwed in, the area of the flattened surfaces got narrower until a surprise squeak alerted me of the problem. Already, I've learned the lesson of why pedal wrenches are made so thin! I'll never use a thick headed Craftsman for this application again, I promise. Now to simply remove it. Well, I don't want to break anything, and already attempted as much brute force as I feel comfortable with. Hence, here I am asking this question. Guesses and speculation: please hold your typing tongue for a bit, and hopefully someone had dealt with this exact situation before!

I've added a photo, although it is as difficult to show as it is to explain without making myself look crazy, weak, stupid, or all of the above. In the pic, the pedal (right pedal) is on the left side of the picture, and the crank arm is on the right. The arrow accents where I believe the problem is. This is where the flattened, parallel, 'wrenchable' surfaces of the pedal spindle transition into the full, round, uncut shape of the spindle. It transitions with a smooth curve, not an abrupt line. As the spindle tightened, its thread pulled itself into the female thread on the crank arm, squeezing the wrench in between with a surprising amount of torque, I guess. I'm looking right at it and it still seems implausible that it cannot be pulled right off, or turned counterclockwise and loosen. Thanks for any creative ideas to try before resorting to a breaker bar technology.

The wrench looks like it's toast. I ruined a perfectly good 15mm combo wrench this way once too. It happens easier than it seems like it should, and to this day I don't really understand the physics of it. Pedal spindles are very hard and that may play a role.

Use the other crank for leverage and untwist it off that way. Stomp on it if needed. If it's really stuck you could slip a cheater bar over the wrench, like PVC.

It looks to be like the spanner has been distorted due to the rounded transition of the pedal shaft. If this is the case, the spanner is already stuffed, and your priority now is to save the crank and if possible the pedal.

Possibly easiest and always a fall back if all other attempts fail replace the crank and pedal. Only down side of this is expensive unless you have a donor crank and pedal, but as tis an option, it allows you to attempt potentially destructive techniques. Its likely the pedal is not completely threaded home, so if you can remove the spanner the pedal will probably be easy to remove even if the shaft is damaged.

My first attempt would be back out pedal with the spanner in place. This may work, or may open the spanner further and round the pedal spindle. If that failed, I would look towards percussion removal of the spanner. I would probably go for another spanner, next size up to start with, goin up in size as you push the spanner out. Do this while supporting the pedal, with the crank free to move

If that failed, I would look at drilling the spanner on both sides, diagonally as shown, this will weaken the spanner and allow the faces to move and open up. Once drilled, try to turn spanner, or reattempt percussion. 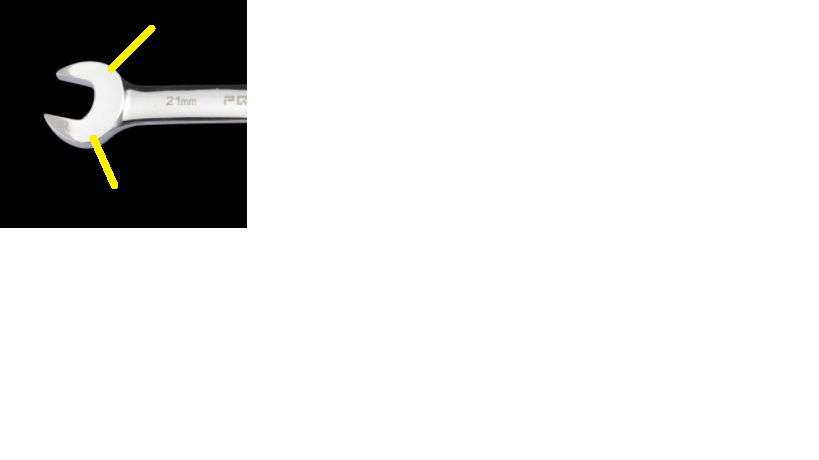 22
Removing a stuck pedal
1
Do I need to replace cranks after newly installed pedals torqued out along with some threads in my crank?
2
Crank pedal spindle hole thread stripped
3
Loose pedal bent under pressure
3
How to destroy a LOOK pedal as it won't come off anyway
20
Do pedals come in widths?
4
Can't remove 6mm hex pedal
1
What causes a slight rhythmic knock in the pedal?