Spokes bow out from the hub flange

The spokes bow out far from the dynamo's flange. I did all of the inner spokes first, and couldn't get an outer spoke to pass under an inner spoke (4 holes down) without crazy distortion. Even going straight to the rim hole was awkward. Probably would kink once tightened. 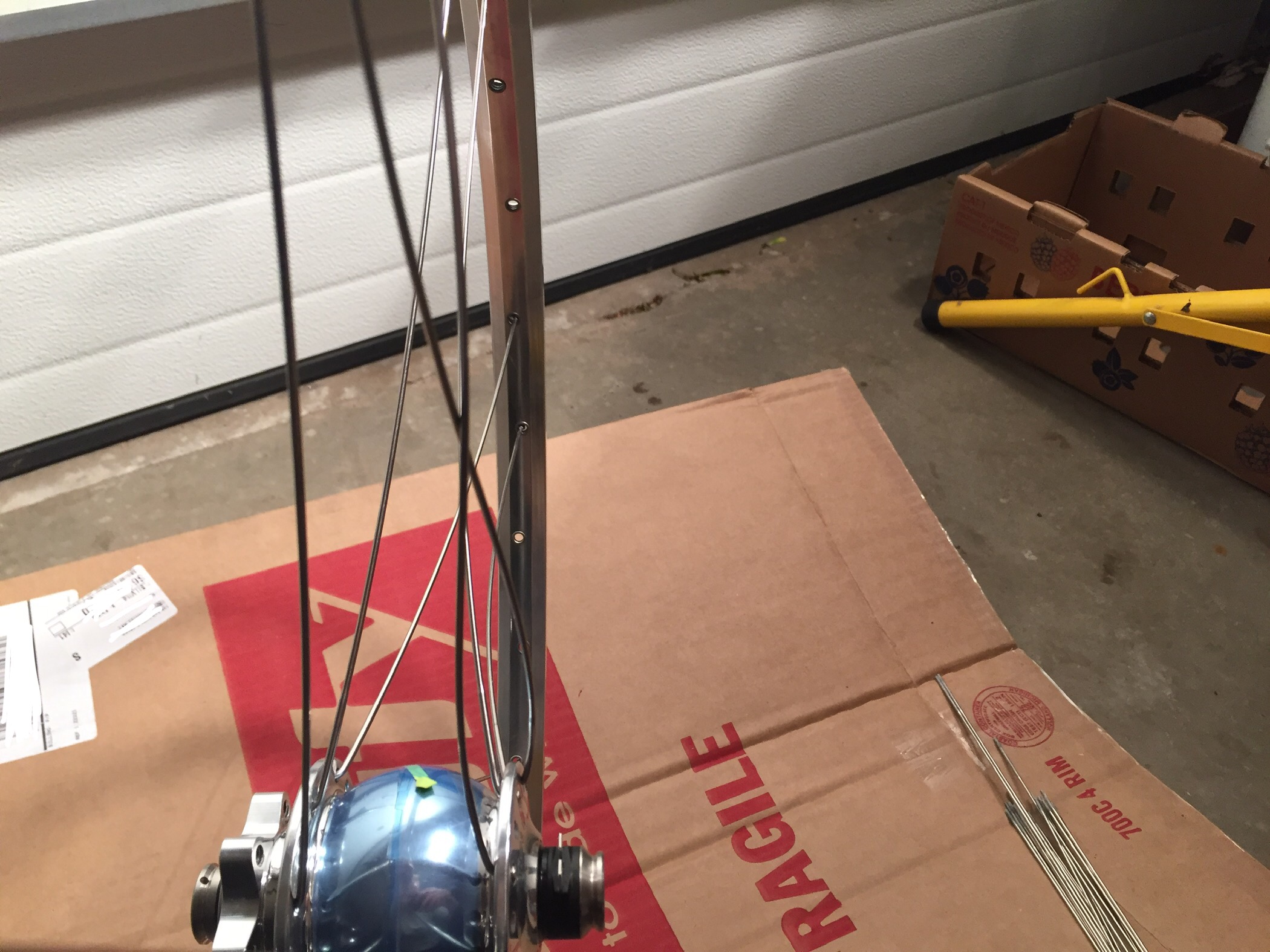 Doesn't seem to be the parts. Though the SON dynamo hub has a thicker flange, its manual specifies 2mm spokes, which is what I'm using. Peterwhitecycles appears to use the SON-Wheelsmith-Velocity combo in their wheelbuilding and recommends two-cross. Here's an example where someone used SON+Wheelsmith DB14 and two-cross lacing.

Here's what I've already tried. Working the spoke to seat the head better, angling the spoke toward other holes, and even applying slight pressure to see if the elbows would bend a tad. Just avoiding the bending problem by not passing the outer spoke under the inner spoke feels like a bad idea.

Bowing as the outer spokes exit the flange is normal. The angle when the spoke is made is set arbitrarily, and it's the job of the wheelbuilder to cold set it best as possible to match what the specific wheel wants it to naturally be for the parts used, such that the spoke wraps neatly around the flange and then runs at a straight line to the nipple.

The better you do this the more resistant the wheel will be to going out of true or breaking spokes. Were you to do nothing and tension the wheel up with the spokes forced into position, the tension will eventually mask the issue somewhat, but it will leave a static stress in the spoke and the bowing will tend to work itself out somewhat in use, which causes the wheel to go out of true. Setting the spoke line at the hub (as this topic is usually called) is one of the areas where good handbuilt wheels can stand apart from most machine built ones. (Automated wheel assembly lines can have a step that addresses setting the line and even do an okay job of it, but it's not universal that they have this functionality and the results can be mediocre even when they do).

There are some different schools of thought for what stage of the build process to set your line at the hub. For wheels like you have in front of you where it's a tight fit and the bowing is fairly severe initially, I usually do it once I'm at "ground zero" for thread engagement, which in ordinary circumstances (optimal, uncompromised length spokes) is after the nipples have been set to just cover all the spoke threads, at which time the spokes will still have near-zero tension. When the bends are severe and it's a butted spoke, it's pretty easy to feel what's happening as you bend and to get the bend you need even without tension. Jobst Brandt in The Bicycle Wheel and in his Usenet postings would often refer to doing it a little further along in the tensioning process on the premise that once some tension is established, it can help the builder feel what's happening as they've gone far enough with the bend (I'm paraphrasing a bit here on rec.bicycles.tech posts I only think I remember). Here are the pertinent pages from his book: 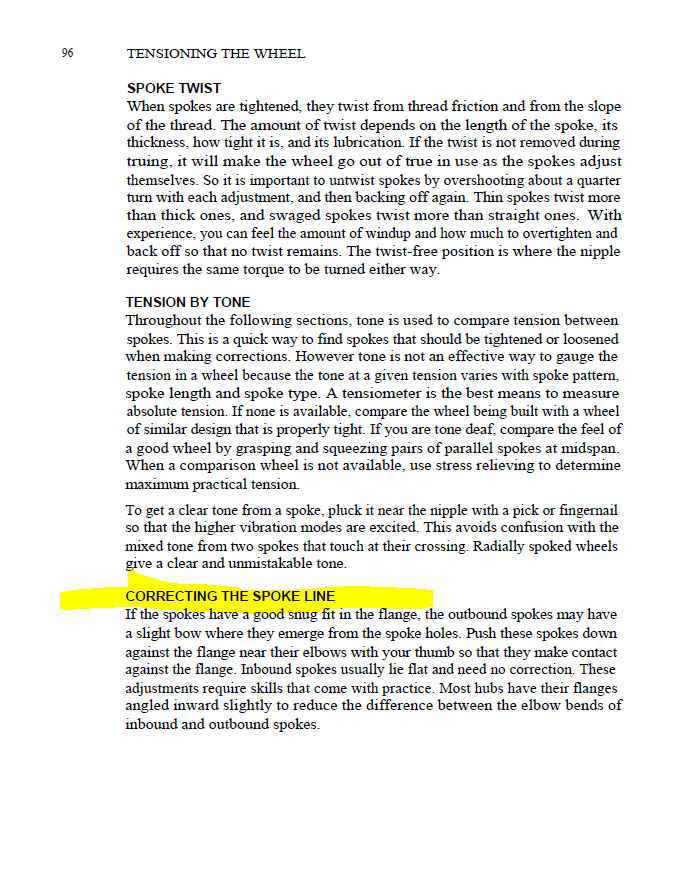 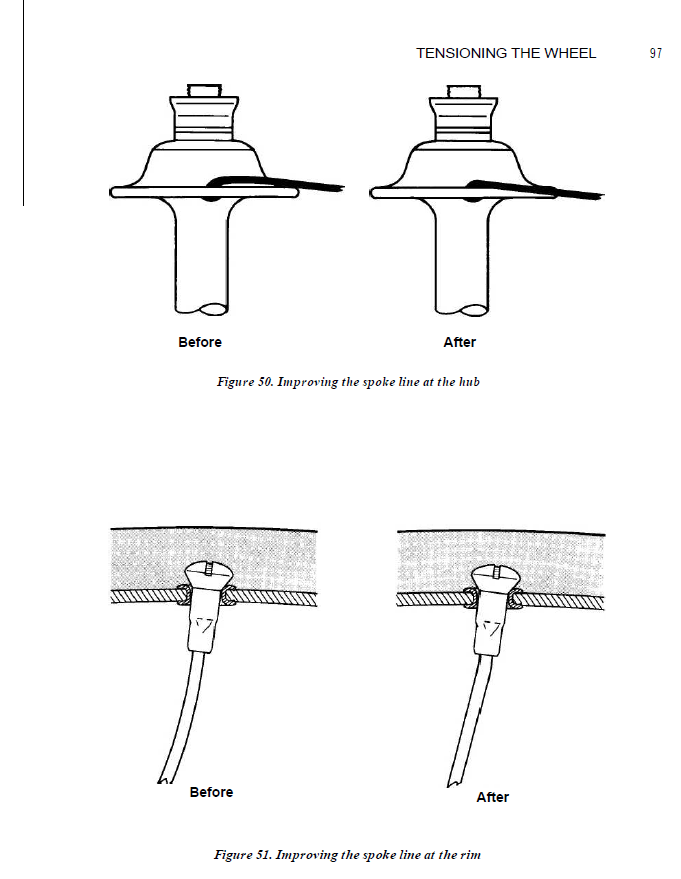 As for the actual technique, I've done it two ways:

You're basically trying to get the spoke to wrap neatly around the flange and wind up aiming naturally at the rim hole. It is a tactile skill that, as Brandt wrote, takes practice. The good news is that while doing an expert level job of it is a key piece of producing wheels that virtually never go out of true, you can still get a reasonable amount of the way there by doing a solid beginner attempt and just get the spokes pointed the right direction.

The other bit of context that might be helpful here is that Schmidt and many other high-end hubs do exactly what you're seeing because they're trying on purpose to create a tight fit and use up all of the bent part of the spoke elbow. Hubs that do a lesser job of this are easier for lacing in mass production environments, but that is where the advantages end. The disadvantages are that looseness means the spokes will tend to have an unsupported area that has to be addressed that much more carefully on a handbuilt wheel in order to give the best lifespan possible. The scenario you're in is the much more favorable one because it tends to be relatively easy to get the spokes to wrap well around the flange as in the illustration above.

22
Is it really necessary to physically cross (interlace) the spokes on traditional wheel lacing?
0
Which spokes to get, Wheelsmith or DT Swiss Spokes?
10
What are the pros and cons of Double Butted vs Straight Spokes when building a wheel?
5
Any experience about radially-laced hub flanges actually breaking?
10
Is this wheel built incorrectly?
4
Why would spokes break at the flange early?
1
Slight Difference in Spoke Tension Between Inner and Outer Spokes on Straightpull Hubs?
4
Should I seriously consider radial lacing?
4
Deriving formula for spoke lengths
1
Wheelbuilding a rim with offset holes - how to lace?