When braking (with any kind of brakes) the tire is subjected to friction against the road. If by mistake a clincher tire has grease all around the two bead sides, it could potentially spin while the rim has locked. Is that right?

We anyway never add any grease to rim, rim strip, inner tube, or tire, but should we ensure that no spinning will occur by adding a hint of glue anywhere? Are the bead friction and a properly inflated inner tube sufficient to avoid slippage?

Mainly I'd like to know (that's my "one question" here; feel free to ignore the many side questions):

I have seen a tiny amount of tire creep on kids bikes, enough so that the valve stem is moved slightly away from perpendicular to the rim. But these are poorly maintained bikes with tires that are always under-inflated.

In order to reduce friction between the rim and tire enough for the tire to spin freely against the rim (especially when inflated) you would need to have an amazing lubricant that I will speculate does not exist. A dab of grease would compromise braking (as Criggie says) but would not allow free spinning.

The static coefficient of friction between rubber and metals appears to hover around the 0.80 mark, so I'll just use that as an approximation. Let's assume the worst-case scenario, where the rim has no bead hook effect, and it is of the hookless type with low-profile rim sidewalls. With a 622mm bead seat diameter tire, I calculate a contact area of 2 * pi * (316^2-311^2) = 19700mm^2 (times two because the rim has two sidewalls), which is equivalent to around 30.5 square inches. Assuming a low-pressure mountain bike tire at 25psi, I get a nominal normal force of around 760 pounds-force, which after factoring in our coefficient of friction gets us around 610 pounds-force of frictional capacity.

Let's see how much braking force we need. Let's start at a nice 10m/s speed with a 100kg rider and bicycle. That gives us 0.5 * 100 * 10^2 = 5000J of kinetic energy. Now, let's perform an emergency stop over 5 meters distance. Using the definition of work as force * distance, we get an average force of 1000N, which is equivalent to around 225 pounds-force. Evidently, an unlubricated tire is safe from sliding around on the rim.

You'd therefore need the coefficient of friction to be around 0.30 or so in order for the braking force to exceed the tire holding force, which is not unachievably low. You'd have to specially prepare the wheel for that: trimming the bead to get a looser fit, and using top-quality lubricants. However, of course, I disregarded the contribution of the bead hook/bead seat in my calculations, and I assumed all the braking was being performed by one wheel, so you may very well need to work harder than that. Even without any air inside, locked-in tires are not rotatable by hand.

As a user, I wouldn't want to deal with adhesive rim strips. Regular rim strips just snap on nice and good...imagine having to deal with this contorted, self-adhesive toroidal mess. I'd rather just use tubeless tape in that case.

Do note that lubricants such as dish soap are regularly used to aid the installation of difficult tires, yet reports of tire slippage have not skyrocketed with that practice in place. I doubt talc powder is any more effective at reducing friction.

Grease in/on a tyre would be a bad thing to do. It will definitely limit friction in places you want friction, and risks degrading the rubbers over time as well as contaminating any rim brake surface.

Normally the friction and pressure from a tube will press the rim tape into the spoke heads/holes and the tyre's bead into the hooks. That is plenty sufficient to stop the tyre moving on the rim.

If your air pressure is low enough that the tyre can move, you're basically rolling on the rim already and asking for pinch flats.

You might be conflating normal tubed/clinched tyres with either of:

Talc was historically used in tube manufacturing, to stop the new surfaces of a tube from sticking together. If you cut open an old tube it may even have some talc on the inside. Talc is not a lubricant, it simply prevents the tacky rubber from sticking to itself.

Some rim strips are glued to the rim, specifically Velox. But with correct tire pressure, a rim strip and a tire will not move. Most new bikes have rim strips which are not glued and they won't move. Tires do not move at all, otherwise, the clincher design would be a failure.

Talc is not slippery enough to make a difference, and it was likely over caution with latex tubes which inspired the use of talc.

This is a quick guide to the rim tapes on the market for both clinchers and tubeless tires (but not tubular tires). It summarizes the points mentioned by Adam Rice and Criggie. 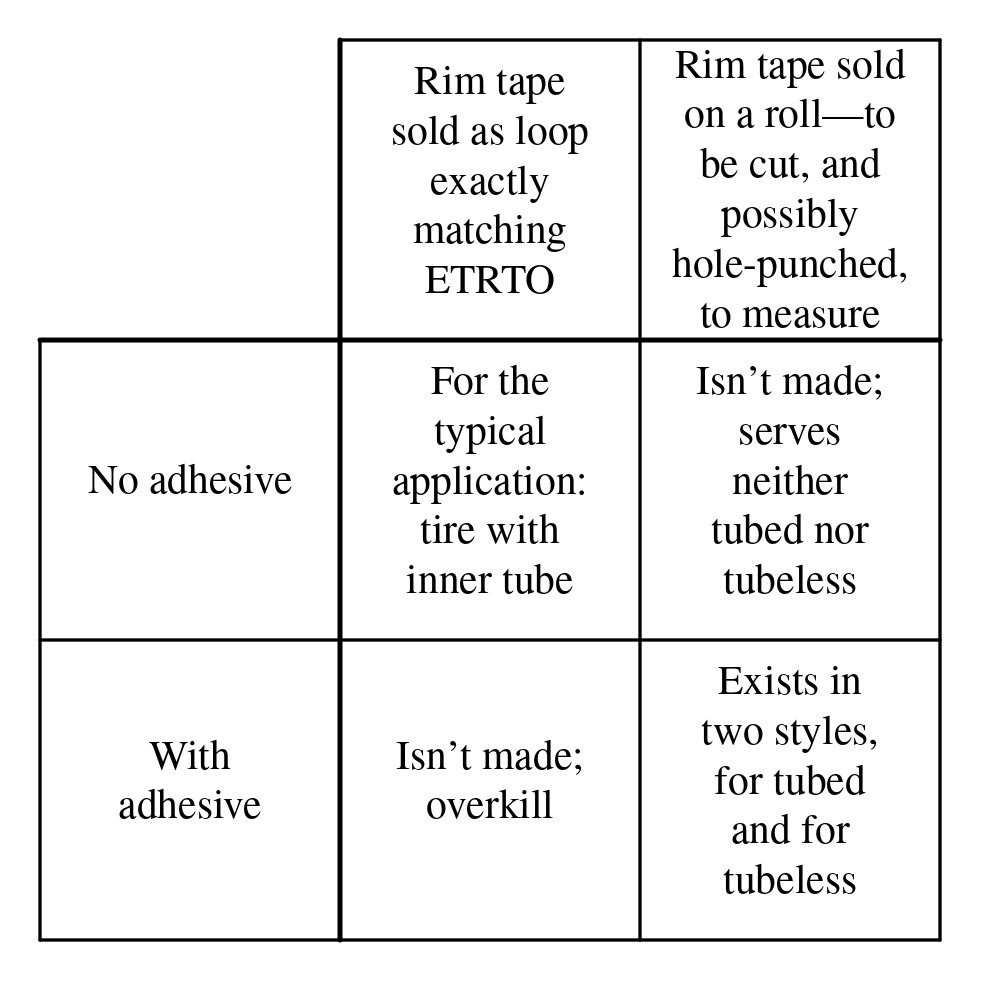 1
Tank tape for tire patching - Enough friction?
5
How to choose rim strip width?
1
Do I have too much chafer strip showing after fixing a puncture?
9
What is mysteriously slicing the inside of my tubes?
7
Inner tube blows up due to rim holes
2
Inner tube valve cut from stretched rim tape?
7
Has this rim strip expired?
5
Tubeless Ready Tyres + Rim Strips?
3
Vittoria Corsa Tyre impossible to mount on LightBicycle Rim