Can I replace my rear cantilever brake with a caliper brake?

Can I replace my damaged rear cantilever brake with a caliper brake?

I assume there are two things to consider: frame and lever.

The frame has a black, hook-shaped part, which I believe Sheldon Brown would call a "device to prevent the transverse cable from snagging the tire if the main cable parts".

How do I assess if I can replace this part with a caliper brake? Do I need to measure the distance to the rim? Would it be enough to get a ballpark measurement from the bolt's centerline to the crown of the tire, and then add the tire diameter?

I assume it would need to be a Single-Pivot Sidepull Caliper brake. In any case, examples of specific compatible types/models would be much appreciated, just as an indication. I am not asking for "traditional" product recommendation: if compatibility is confirmed I will likely be sourcing the brake from a bike jumble or similar. Chances are I would need a model which is out of production anyway.

What about the brake lever? If I am reading this old answer correctly then I can just keep the current lever, originally intended for cantilever brakes (as opposed to direct pull, aka v-brakes). Is it as simple as that? If they are not directly compatible, will it show in insufficient pull (weak braking)? Or excessive pull (reduced modulation, harsh braking)? 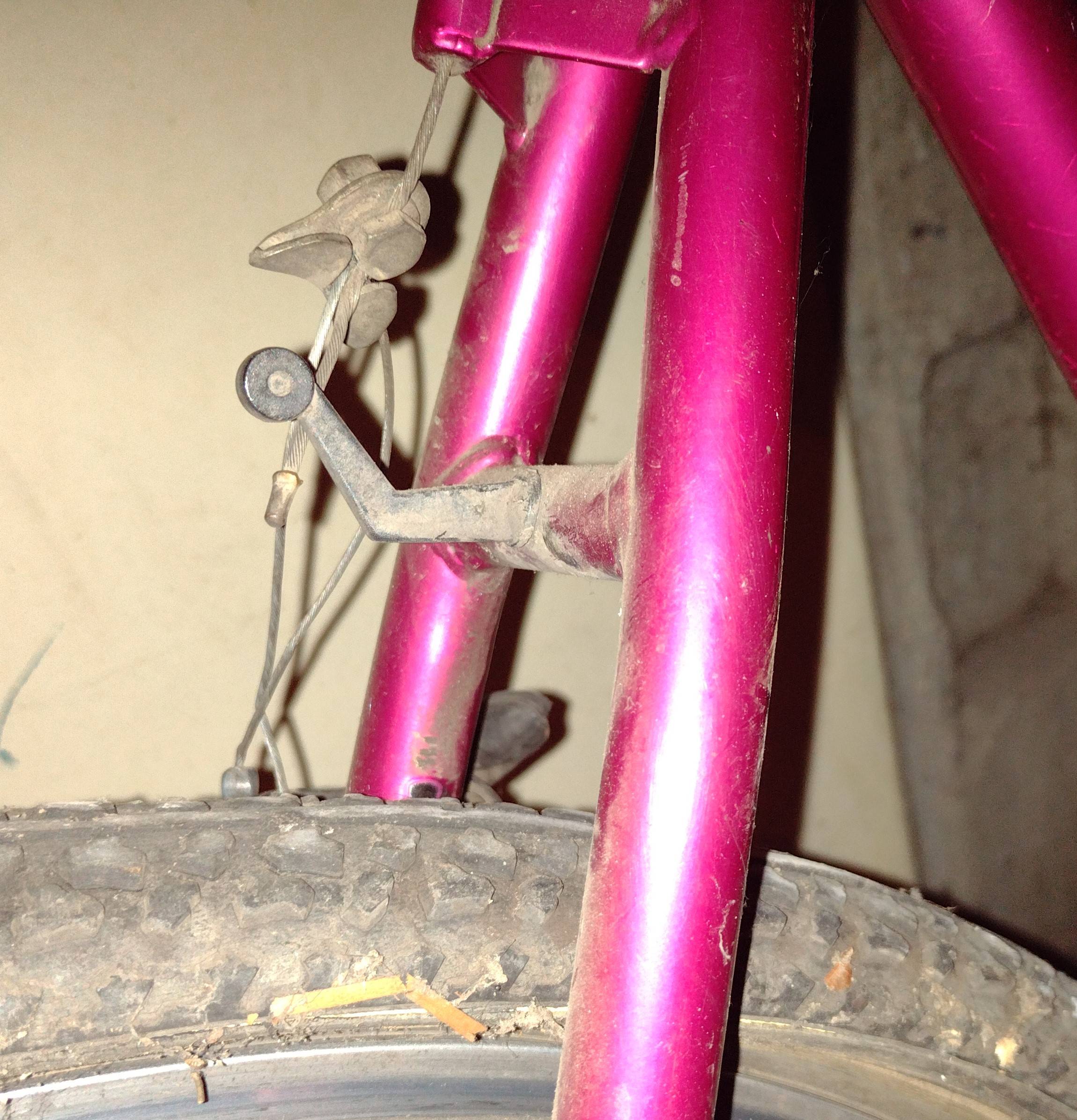 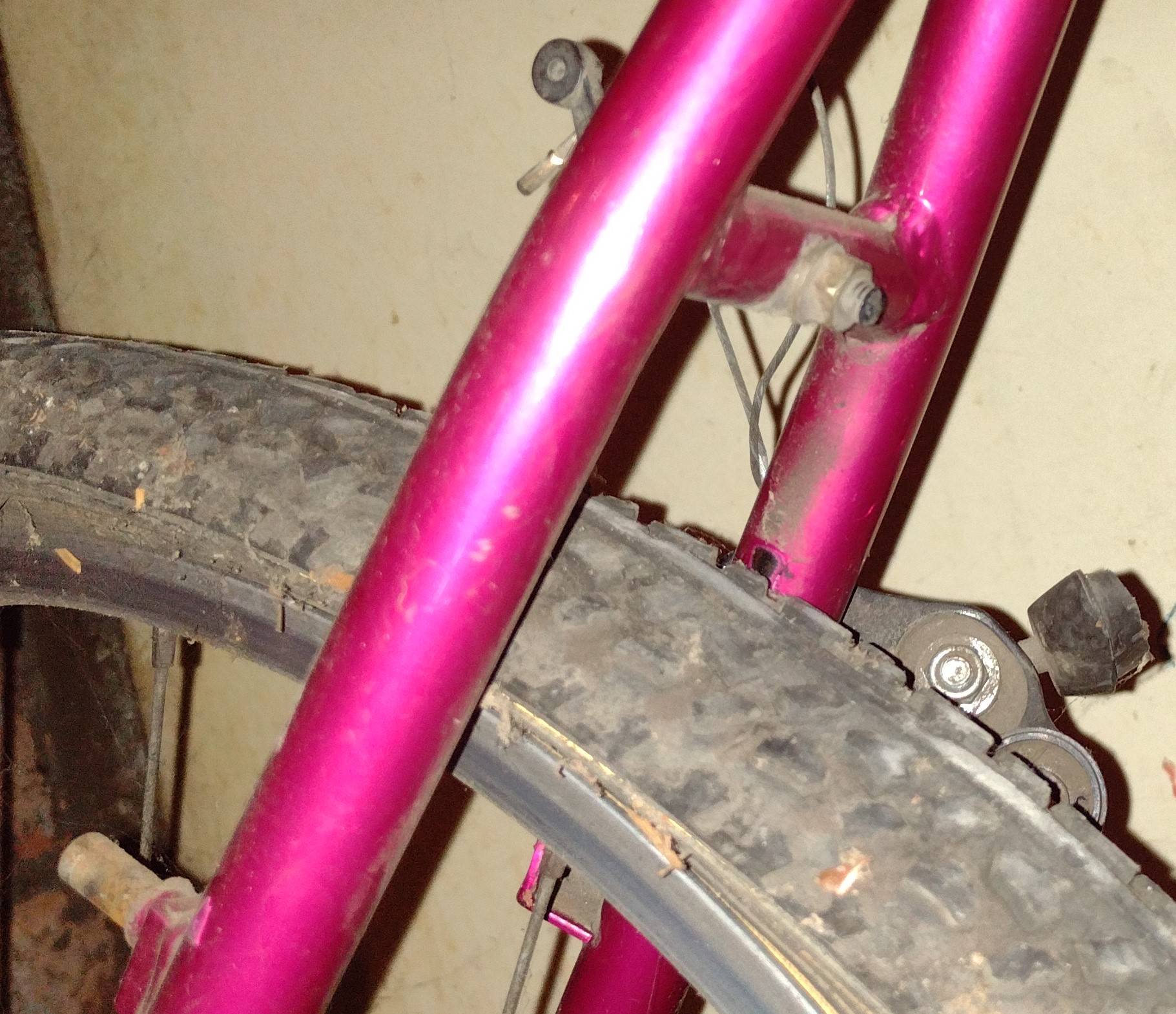 Acknowledgment: this question is a child of Brake post broke off the boss. How do I replace it?

One of the comments on the original question was "is there a hole to install a caliper brake in the bridge above the wheel?"

I think it's an idea worth exploring, but it's probably better to address this in a separate question instead of a combination of edits and comments - but opinions on this are welcome.

EDIT: The first answer I received was skeptical. Only when I read it I remembered I used to have a Gemini Outrider with caliper brakes. So it seems appropriate to include some example photos - they aren't great but they were not taken to document the brakes. I believe these bikes were MTB BSOs sold by Halfords UK. I think the rear tire was a Michelin Wildgripper 26 x 1.95 which I put on myself, and there seems to be reasonable clearance remaining.

I can easily imagine that brakes like these were only ever put on at the BSO factory, and never available as a standalone part. So they might not even have a make and model - well, I guess it's still worth asking. 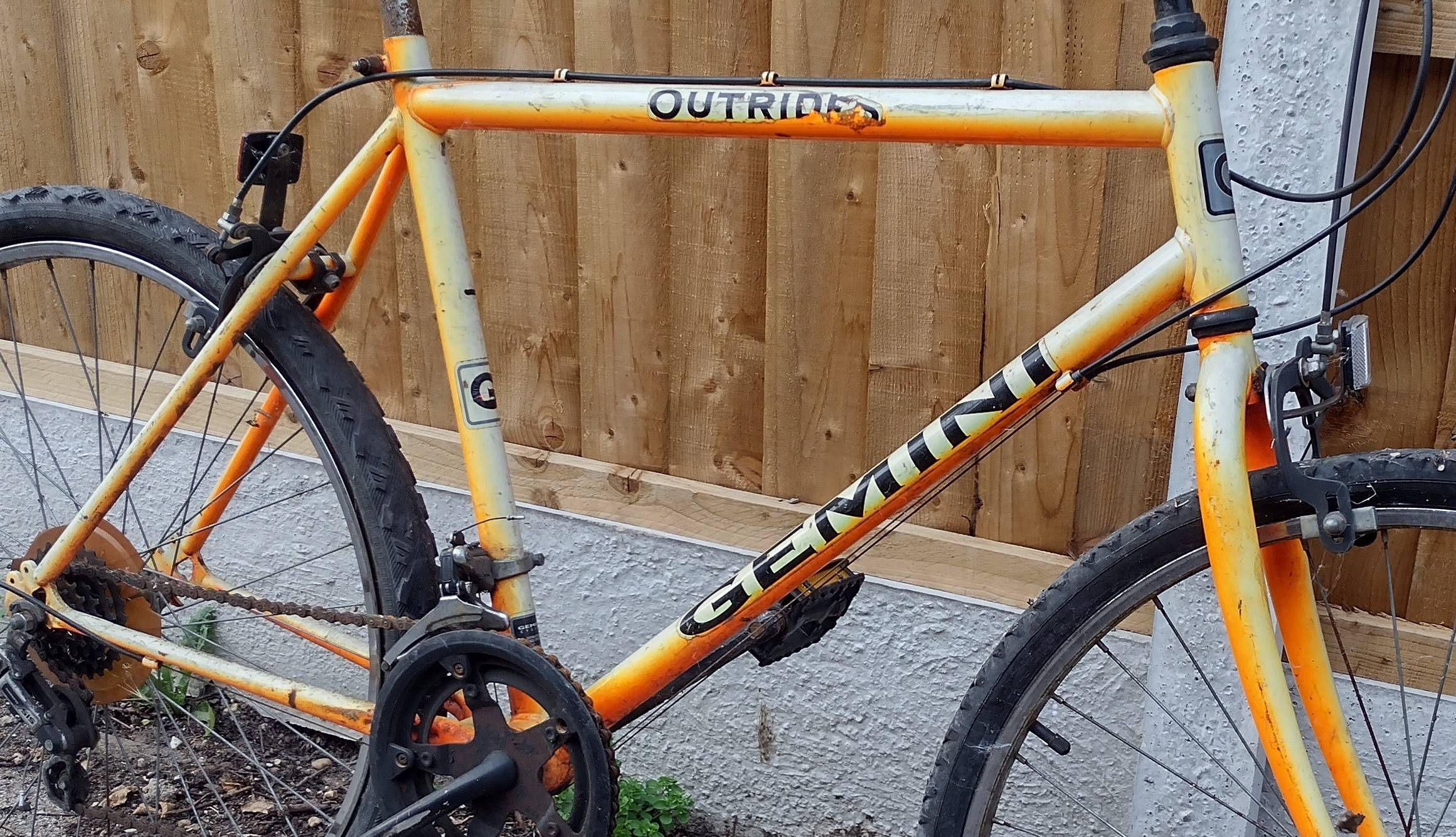 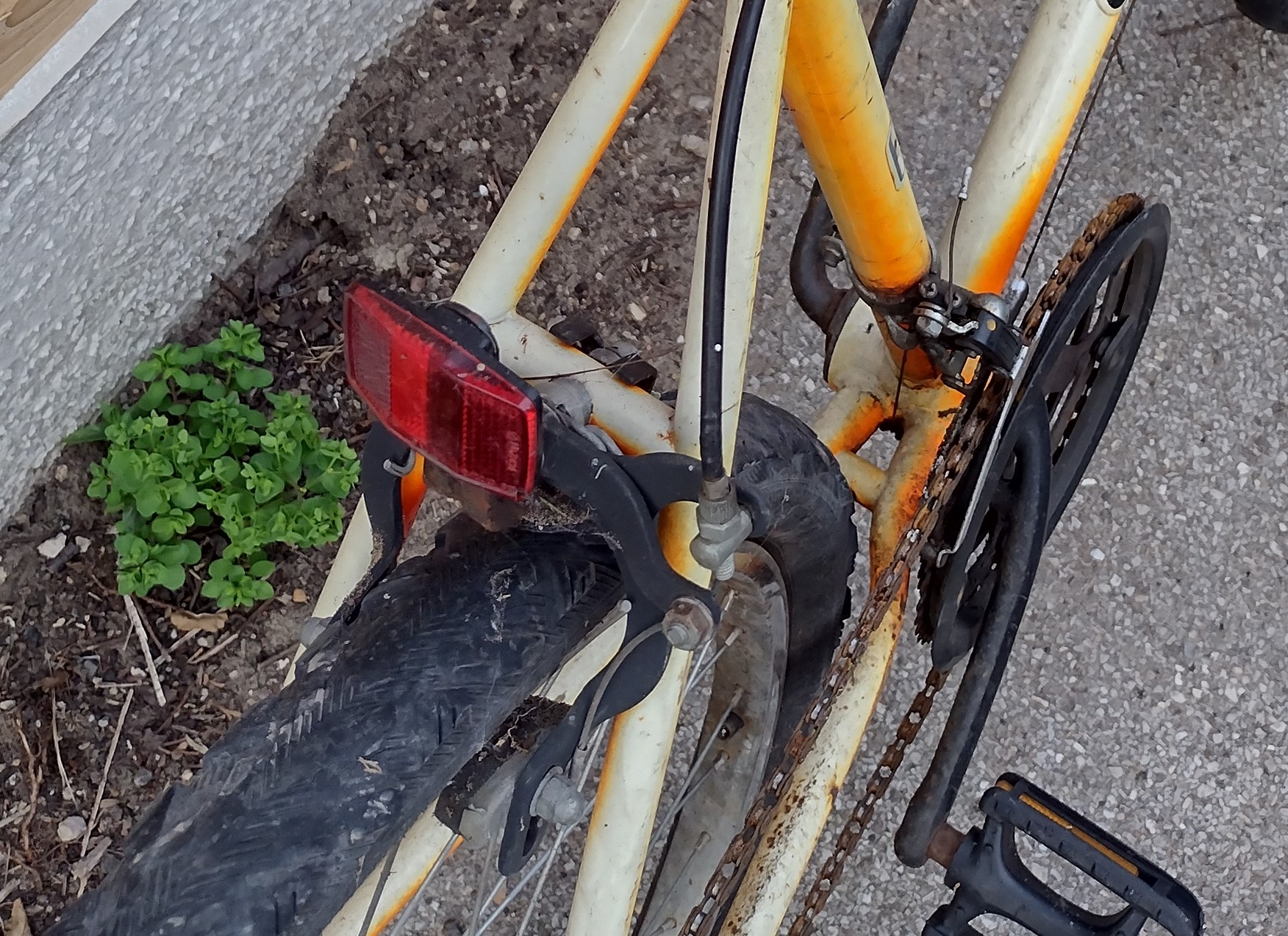 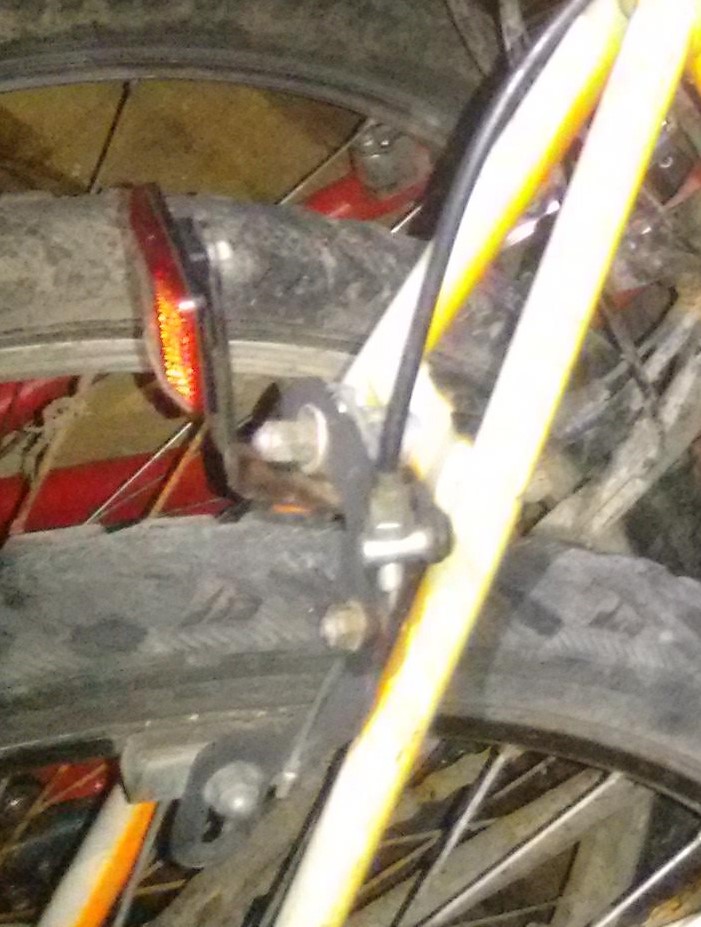 You can't do this. First, by caliper brake, I assume you mean a road bike-style rim brake. To mount one of those, you need a bridge between the seat stays, and it needs to be drilled at the right height for a caliper brake to work. In addition, road calipers tend not to work with MTB-width tires. The right road calipers can, from my memory, work with at least 32mm tires, but this is still narrower than the narrower older MTB-style tires (which I think may be 2" in diameter or less).

Frames should tend to be designed for either cantilever or V-brakes or for road brakes. I can't see what arrangement your frame has. I have a Gunnar Crosshairs cyclocross bike, and while it does have a chainstay bridge with a hole, that hole isn't threaded for a road brake, and it's at the wrong height anyway.

I suspect you could do this. There is a brake bridge with a hole on centerline.

You will need a caliper brake with enough "reach" to get down to the rim brake track, and enough width to get around your tyre when brake is actuated by lever. Finding one new will be expensive, so look around for a bargain. It may be cheapest to buy/find a donor bike rather than buying new parts.

The bridge does look a long way above the rim as well - if you can't find a super-long reach caliper then you may need to fabricate a dropper plate to provide a lower mounting point. The longer a caliper is, the less-well it works due to leverage.

Additionally you might find that the short-pull of inner cable expected by a caliper brake will not match the long-pull brake lever that was used to actuate the former canti brakes, so you may need to replace the handlebar lever.

Not the answer you're looking for? Browse other questions tagged rim-brake brake-levers frugal bso caliper or ask your own question.

4
Brake post broke off the boss. How do I replace it?
2
What are these parts of the frame called?
1
Replace V-Brakes with Caliper Brakes on a Flat Bar Road bike

3
Suitable upright bar brake lever for old caliper brake
3
Flat handlebar caliper brake compatibility
4
Caliper road brakes on cantilever specific frame
1
Replace V-Brakes with Caliper Brakes on a Flat Bar Road bike
3
How much cable can I pull with a brake lever in another custom mechanism, and how can I achieve it?
1
Shifter/brake-lever compatibility with front and rear derailleurs
9
Can a Shimano XT (mountain) hydraulic disc brake caliper be used with an Ultegra STI road brake lever?
0
Why is it not recommend to put V brake levers on cantilever brakes?
2
Why do my side pull caliper brakes work better with linear pull levers
3
Cantilever brake is missing its mounting screws and washers, how do I replace them?