Wheel not straight in dropouts - can this cause brake rub?

My front wheel is not straight in the fork dropouts. It's been like this since I've bought the bike second hand a few years ago. See pictures below.

I've tried installing an identically sized wheel from a different bike with the same result, I've also removed the brake rotor from this wheel and installed it the other way round. Once again the left side had less clearance, and so I conclude it's a fork/dropout issue and not wheel dishing. If it matters, it's an MTB fork with shocks and a QR skewer.

Another problem I've always had with this bike is that I could never align the front brake caliper in such a way that the (disc) brake wouldn't rub. I did the usual "loosen caliper, hold brake, tighten caliper" procedure, and while it worked with other bikes, here it never quite helped. I could actually see that the caliper was centering itself around the rotor correctly when the brake was pulled, but then as I tightened the bolts, they were moving the caliper to a slightly different position, thus causing the rubbing.

I talked to my local BSO and they were adamant that the issues are not related, and that the rotor is straight because it's attached to the hub. But to me if the dropouts are misaligned, then the whole thing, including the hub, will be tilted. Am I correct?

Below is a drawing of my understanding of how this would work. I've marked the rotor as green.

Left side (NB: units on tape are centimeters) 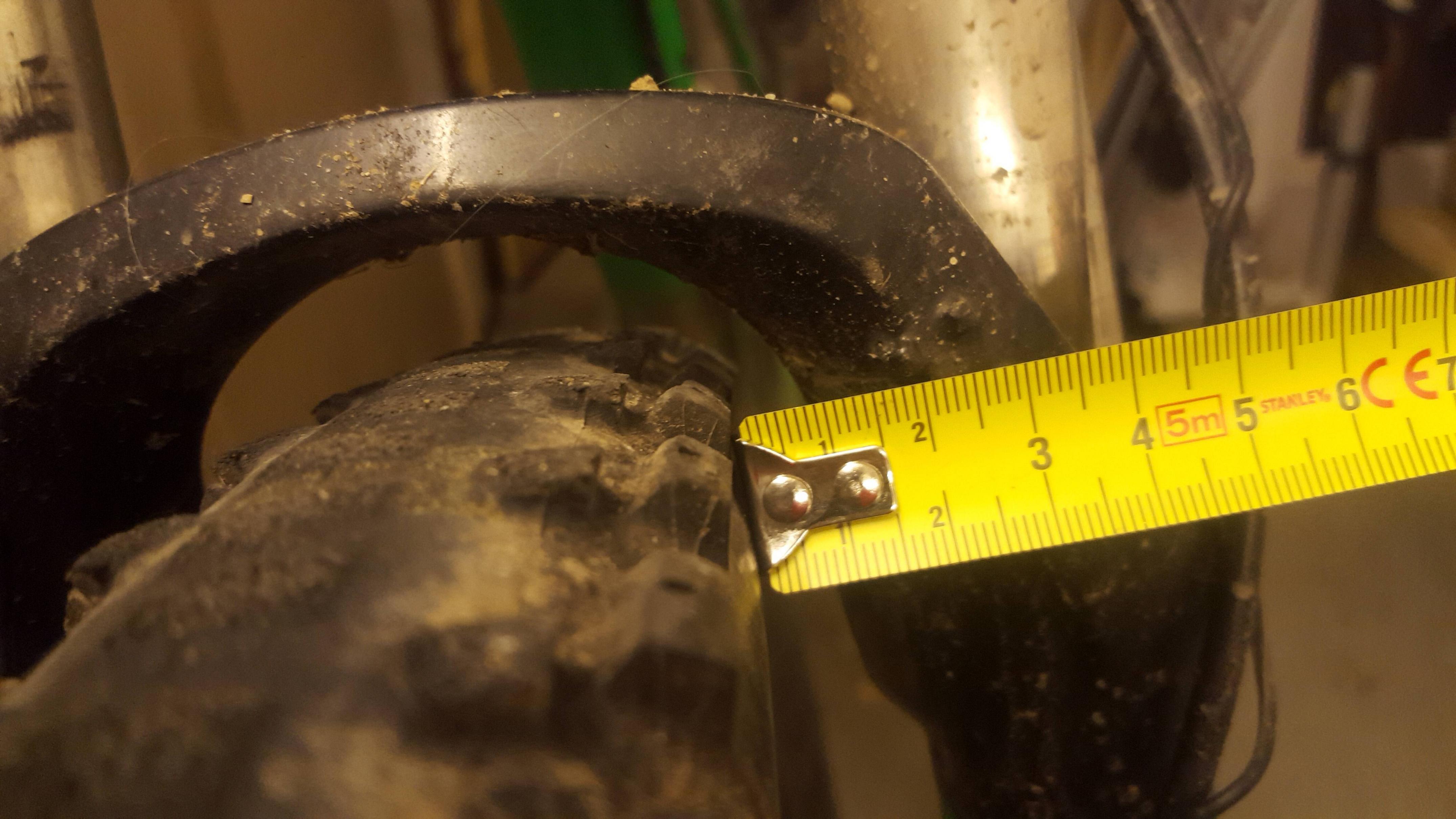 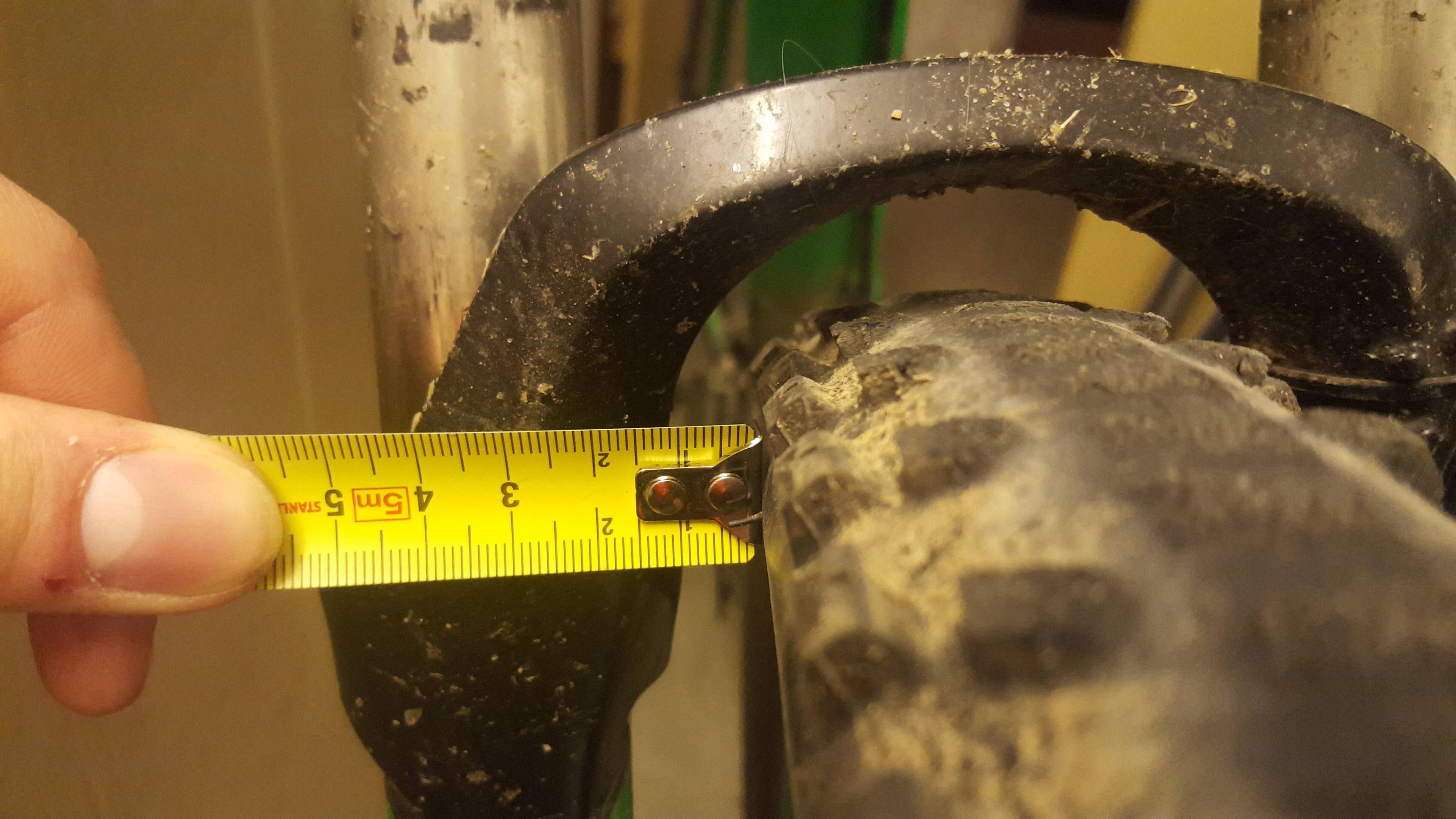 Logically there's no proof here that the dropouts aren't straight.

The difference in gap you're seeing when you flip the wheel and install different wheels could be material imprecision in the construction of the fork. Also it's possible for the dropouts to still be aligned relative to each other even if their alignment relative to the steerer or the legs is offset or angled in a way that can cause your asymmetrical gap.

Higher quality forks (anything made to be serviced, say) tend to be pretty dialed in their alignment for all of the above (damage notwithstanding), but lower-end forks are not necessarily.

Really you should get some kind of dropout alignment tools on the dropouts. That will tell you whether you have a meaningful problem with them. Shops have them, or you can make your own with a 9mm solid axle cut in half plus 4 nuts and washers for it. (Or 9mm or 3/8" threaded rod).

If there is meaningful dropout misalignment on a suspension fork, that's pretty unusual. If it came from the dropouts actually getting bent somehow, that would be a fork that's done for. If there's a vetical offset that developed from the QR being loose and causing some material loss, that's annoying but not the end of the world.

It's very common for adjusting the caliper centering by squeezing the brake as you tighten down the mounting bolts to completely not work at all. If it's going misaligned in the direction that can never be improved by aligning it manually (i.e. the top edge of the rotor hits the pad but then goes diagnoally askew), that problem is solvable only by getting the mounts faced. Otherwise it just means you have to align it by eye, taking into account how it wants to squirm. Sometimes changing the washer situation under the bolts can help with this, i.e. if there's a misalignment between the axis of the threads and the mounting surface. This is why some calipers put a set of convex/concave washers under the bolt shoulder. Sometimes adding such washers plus longer bolts can make adjusting the brake by squeezing the lever and tightening the bolts work where before it was impossible.

Not the answer you're looking for? Browse other questions tagged wheels disc-brake fork dropouts alignment or ask your own question.