I'm interested in putting a discs brake on the right side of a bicycle. The goal is to have dual front discs, similar to how motorcycles often use double front brake discs.

I can buy or make a custom hub with two discs. That won't be a problem. And I can arrange a second brake tab on the fork, or even make a custom fork altogether. The problem in question is that disc brakes are engineered to fit on the left side of the bike only. Mounting one on the right side would be straightforward, but the braking forces would be reversed compared to the normal mounting. It would be like braking while the bike was rolling backwards. Would this cause any problem? Are the brake pads designed to take brake forces in either direction equally?

Back in the days of u-brakes and v-brakes, we saw them mounted both ways by being mounted sometimes to the top or bottom of the frame stays. So we know those worked either way. But I have not seen the same variation for disc brakes.

Tadpole trikes have mostly had standard disc calipers running backwards on the left wheel for as long as they've existed as a category. There's not really a major concern here. How to design the mount for a given application is its own question that has ramifications on strength and reliability.

It's possible to imagine a caliper designed in a way where it's adequately strong in the normal direction but not backwards. Without doing a study on various caliper designs, it's probably pretty likely you'd find that on ultralight calipers if at all, and probably not at all.

The bike in the above link has a single blade fork but a "righty", not a lefty. The maker has modified an Avid BB7 to fit the trailing side of the fork rather than mounting it upsidedown on the leading side, (which is another option), preserving the smooth look.

Edit: Note that my answer is all purely theoretical speculation. Nathan’s factual answer establishes the reality that the limitations I highlight are not problematic in real life.

From looking at XTR M9020 calipers for example, they are indeed designed asymmetrically. When one applies the brakes, I suspect the net force ends up being a torque, where the caliper wants to pivot in the leading direction with the leading bolt acting as the pivot point. 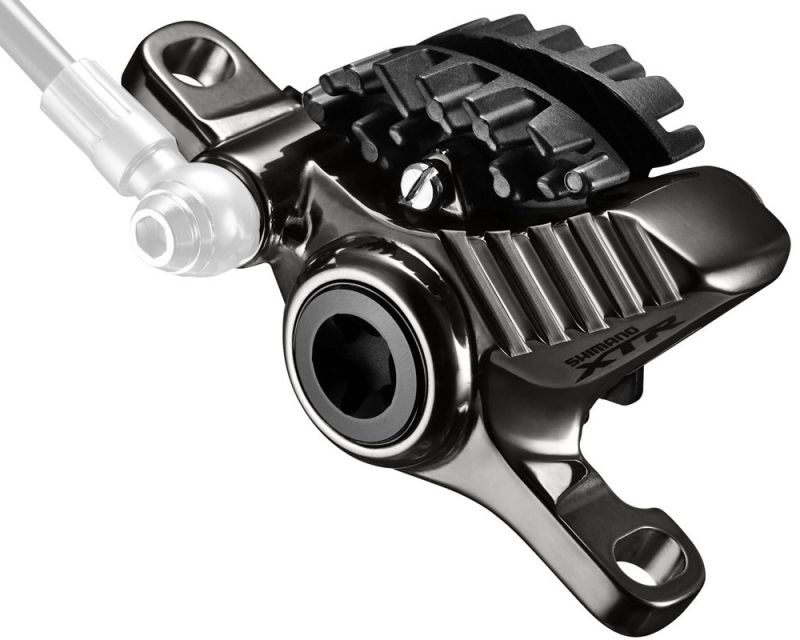 You can see how the caliper’s “body” doesn't appear to be centered between the post mount tabs. It looks to be more substantial on the leading side (left side in the image), which makes sense since the leading side is closer to the pivot point and therefore sees a higher force (since torque = force * distance). Accordingly, the following half of the caliper (right side in the image) sees less force, and thus the rear mounting tab can be safely located at the end of a thinner "arm" (as it is). Installing the caliper in reverse would mean that the thin arm leading to the rear tad would bear the brunt of the braking force-generated torque instead, which I don't think is a particularly good idea. (Edit: it’s fine.)

Of course, different calipers have different designs, so this may not be valid for the exact model of calipers you plan on using. However, the other calipers I own (Shimano MT200, Tektro Spyre, and Tektro HD-M275) all somewhat share this asymmetric design, so perhaps some caution is indeed warranted.

While I try to avoid overapplying the "It's your brakes, so you should be extra cautious" viewpoint, some level of hesitation is probably warranted. Do keep in mind that calipers have to accommodate reasonable levels of reverse-direction braking (eg. when someone rides backwards and applies the brakes), although I would assume the ultimate failure load is lower in the reverse direction.

4
How do I align my front brake disk with the caliper?
2
loose brake calipers
8
Road bikes rim brake or disc brake
3
Will disc brakes aggravate the problem with spokes pulling through the rim?
8
Do mechanical disc brakes suffer from heat-induced fade?
3
mounting disk brake caliper problem: wheel doesn't spin freely, rubs outside pad, and caliper already as far to outside as possible
4
How to upgrade disc brake size
3
Would rotating or flipping disc brake rotors make any sense?
8
Where should the brake calipers grasp the rotor?
0
Alternatives for mineral brake fluid / oil (in a pinch)