What are the geometric differences between a bicycle with aerobars (aka tribars) set up for touring (or long-distance) and one set up for speed?

I would like to ask some questions about aerobars, also known as tribars.

However, as a matter of intuition (I personally have never used aerobars), it seems to me they might offer a lot of comfort when you're out on your bicycle for many hours. I mean I have leaned on my (flat, mtb) handlebars when tired. Well, that intuition seems justified considering I have seen some touring vloggers use aerobars. The world famous Mark Beaumont who has gone around the world on bicycles TWICE and the second time he used aerobars.

I like to use visual aides with my question/explanations so: vlogger with aerobars:

And most important question: If you wanted to make a compromise between comfort and speed, how would you set-up your aerobars? And what properties would you seek regarding the geometry of your frame? As i said above triathlons can be very long... maybe look for a bicycle whose frame most closely matched a triathlon bicycle?

I am actually thinking of buying a new XC bike.

I dont want to just google "ideal measurements to look for when buying a new mtb".

I've seen many times on the internet MTB geometry being characterized as "very slack". I've never really understood what that means 100%. I do know that in general the ideal geometry of an mtb and of a road bike/tt bike /tri bike are at odds with each other. I dont want an mtb whose geometry is too much at odds with speed geometry.

What I want is to creat a chimaera between an mtb, touring bike and a speed demon (a place-holder term for either road bike/tt/tri bike). Actually my original idea was just "mix mtb and road bicycle into one ideal bicycle". There's such a wide variety of bike out there, including of bikes meant for high speed, that "speed demon" seems more appropriate. I've actually posted on this forum before asking about mtb tyres at road tyre pressure. 2 inch thick, 7-10 bars. The idea was to use 7-10 bars on the road and deflate the tyres on off road. That was sci-fi. I've analyzed tyres until ive become an expert on them. I've now moved in my "project" to other issues.

While the original idea of mixing mtb and road into one ideal bike seemed daunting if not impossible, putting aerobars on mtbs is something some people actually do. Adapting mtbs for touring is something people actually do. Makes sense that you can do both: mtb adapted for touring but also set-up with aerobars. So this seems to be the right direction for my "project". I should mention the idea is for it to still be usable as an mtb, so it would still be set-up with thick tyres (or at least thicker than a road bicycle), flat handlebars and suspensions (maybe front or full, not sure yet). I could then go many kilometers in relative comfort on road and then just use it as a classic XC bike when deciding to go off-road.

But my current mtb sucks. I'm not going to set this one up like this. I definitely need a new mtb, so I should buy one whose geometry is already best suited for such compromises.

A general geometry difference between the two distinctions is a bicycle set up for speed (an aerodynamic triathlon or time trial bike frame) typically has a steeper seat tube angle (more upright) this moves the seat (the cyclist’s pelvis forward, essentially rotating their whole body forward when they are using the aero bars. This maintains the legs to torso angle similar to an open road bike position.

Whereas on a traditional road/touring/MTB with a more relaxed seat tube angle (~73° relative to the ground), using aero bars closes up the legs to torso angle (think “more bent at the hips/pelvis) which can somewhat inhibit breathing, comfort, and power generation.

There are ways to circumvent this on a road/touring bike, but with some compromises. First, a seatpost with a more forward seat position could be used. This mimics the steeper seat tube of a dedicated time trial frame. However, that position has its compromises as the body is now more forward over the BB/pedals which is not as conducive to a good climbing position (where some riders actually slide back on their saddle to be more efficient while climbing). A second way to circumvent the limitations of a touring bike geometry with aero bars is to raise up the aero bars a bit to open up the legs to torso angle. The rider will be a little higher and may catch a little more wind on their torso, but the narrower front profile of the rider will still be present offering some aerodynamic benefits.

Since every rider has a different flexibility, these adjustments may not need to be employed, and realize that there will always be compromises made when adding aero bars to a touring/MTB frame. Sometimes the compromises are minor; other times they pose real choices needing to be made as to which path is preferable.

The usage of aerobars is slightly different between competition and long distance:

I ride for many hours at a time, not very quickly, and do use aerobars, fitted to a tourer. My wrists like them; they may help against pressure on my ulnar nerve, if I can use them for enough of the ride, but they don't help my back (which only suffers from too much climbing). I don't use them in a group, except occasionally on the front, so on my recent 420km/24 hour team event they were close to deadweight. Note that I optimise my saddle position for drops/hoods, and have aerobars that aren't all that low. The saddle type or position isn't perfect for long hours on the aerobars (too much pressure on the nose) but I don't tend to have suitbal stretches for more than a few tens of minutes at a time. I have them quite a long way forwards but have long arms - stretched out even further I might have a thighs vs. ribs issue (see Ted Holt's answer) but I might have to try it . 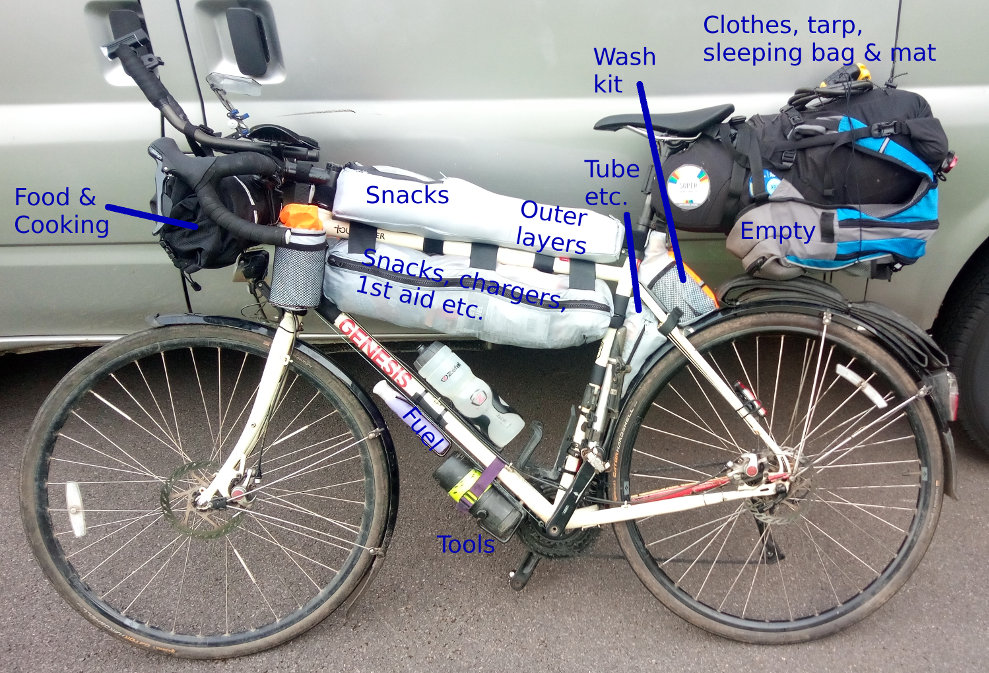 This picture is one I uploaded recently for something else - that's my light camping setup on the tourer, but you can see the aerobars there.

When used for endurance, the main handlebar (often referred to as the base bar in the context of aerobars) is set higher than in a really aggressive race/TT position. So as soon as you clamp the bars to an endurance geometry bike, you have a different position to the same bars on a bike built for pure speed.

Many aerobars can also have adjustable height (e.g. with spacers), and when fitted for endurance use, setting them higher can be helpful. This is partly because low aerobars can prevent you using the bar tops, especially with narrow base bars or with lights fitted.

Using aerobars on flat bars is perfectly reasonable. Note that flat bars tend to start higher than drop bars for the same rider, so your legs are unlikely to come up too high. I planned to do this on Saturday because of a 210km ride on my hardtail, 150km was paved and much of that suitable for aerobars (so was some of the gravel). I would have liked the extra hand position compared to ergo grips with tiny bar-ends. But the screws were so stuck I snapped them and had to do without. BTW I ran my tyres at the max stated 4.5 bar (2.1" WTB Nano) and the ride was nice on road, OK on gravel, but I should have let them down for the proper rough bits.

The longest common triathlon is the ironman, with a 180km ride - but that has to be done pretty quickly, and it's not really a very long ride. Where things get really interesting is things like 12 or even 24 hour time trials. Once you get to ultraracing, the setups I've seen are approaching what I'd think of as an endurance fit - comfort then efficiency. An issue to be aware of is Shermer's Neck - a condition where ultra-racers quite suddenly can't hold their heads up after riding very tucked for days on end.

Not the answer you're looking for? Browse other questions tagged mountain-bike touring-bikes triathlon time-trial aero-bars or ask your own question.

4
How should clip on aerobars be adjusted to the user?

32
What are the differences (and their practical implications) between a 29" mountain bike and a cyclocross bicycle?
1
What's a good setup for an experienced but rusty cyclist training for his first triathlon?
24
How do you distinguish a touring bike from a speed/road bike?
15
Why do some triathlon seatposts go straight up and down instead of at an angle?
0
Specialized Phenom seat for TT
3
What are the technical differences between a bike for off-road touring and a mountain bike?
2
Convert used road bike or MTB for touring?
5
Hire road bike for one day for race (never ridden one before)?
0
What are the main differences in Giant's Toughroad and Revolt drop-bar bike series?
15
Why are long haul touring bikes sold with 9-speed drivetrains?