Output of a Hub Dynamo measured with an Oscilloscope

What signal do you get from a hub dynamo when measuring it's output with an oscilloscope. Please include information on load and setup.

I have two dynamo hubs here.

First a Shimano HB-C050-DR. First I measured this unloaded, and the trace starts as I spin the wheel by hand from a standing start. 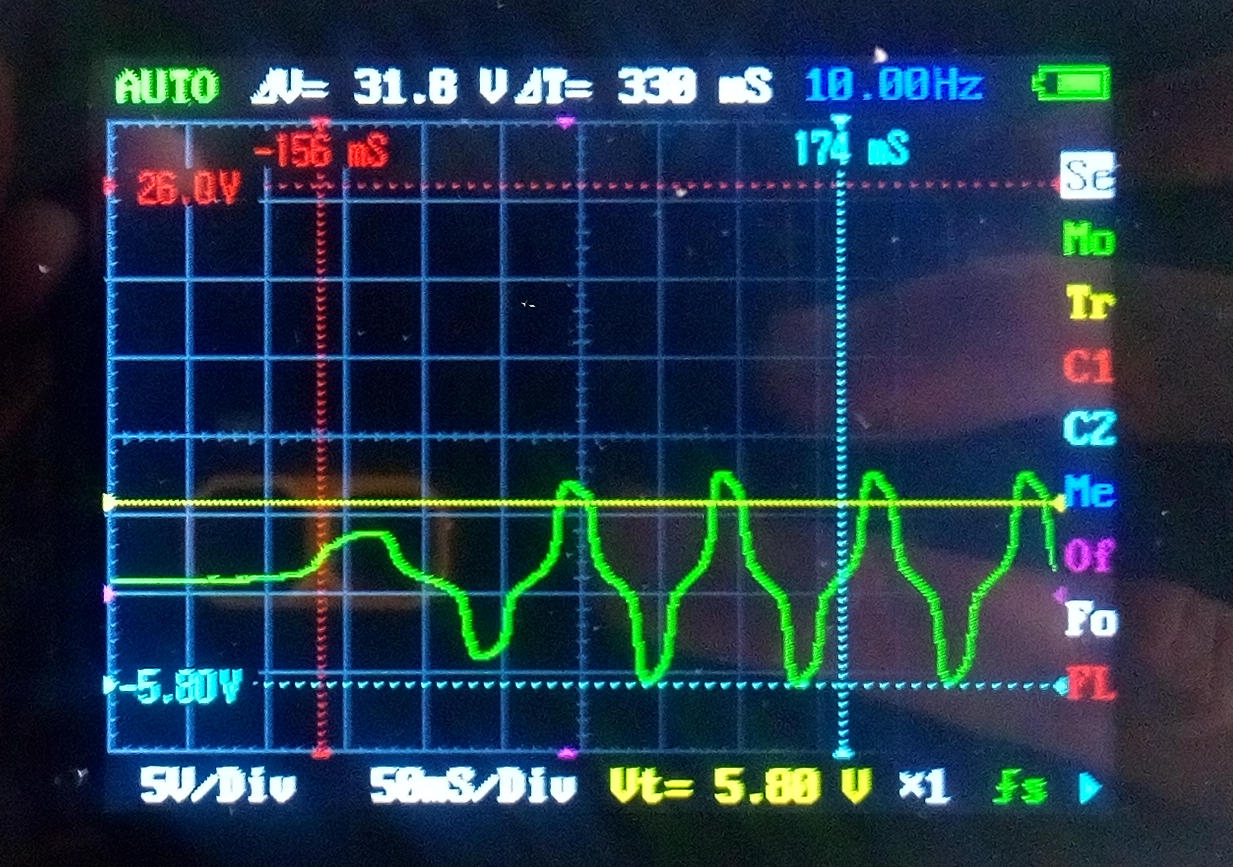 Note the total (peak-to-peak) amplitude of about 12V with no load, and the period of about 0.1s. It's a bit spiky.

I found a way to connect my scope with the lamp in circuit (Raleigh RSP, a cheap and simple light - unfortunately not designed to be opened up or I'd find out just how simple). There's also a rear light - a Busch und Muller Secula with a failed standlight (water ingress): 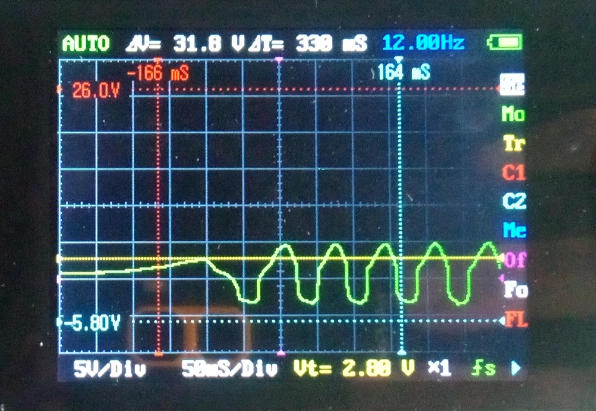 Loading this hub brings down the peak-to-peak voltage to about 8V but not symmetrically. This light visibly flickers below about 15 or even 20 km/h, but that's with a hub meant for 26" wheel on a 700c rim. The wheel spins down considerably faster with the light in circuit.

Next we have an SP-PD8, a much more modern hub. Unloaded it is quite close to a sine wave, with close to 15V peak-to-peak. 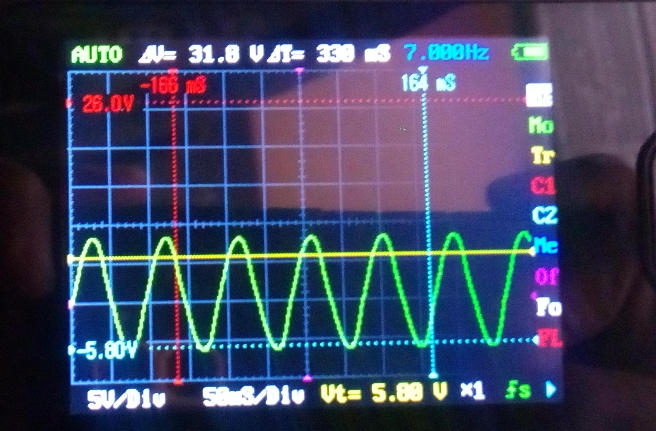 We have a very similar period of about 0.1s at first, again spun by hand, but this time as it slows down (hence the report 7Hz which was still updating after the trace was locked). On this bike I can disconnect the rear light, and measure the output loaded with just the front - an Axa Luxx 70+. 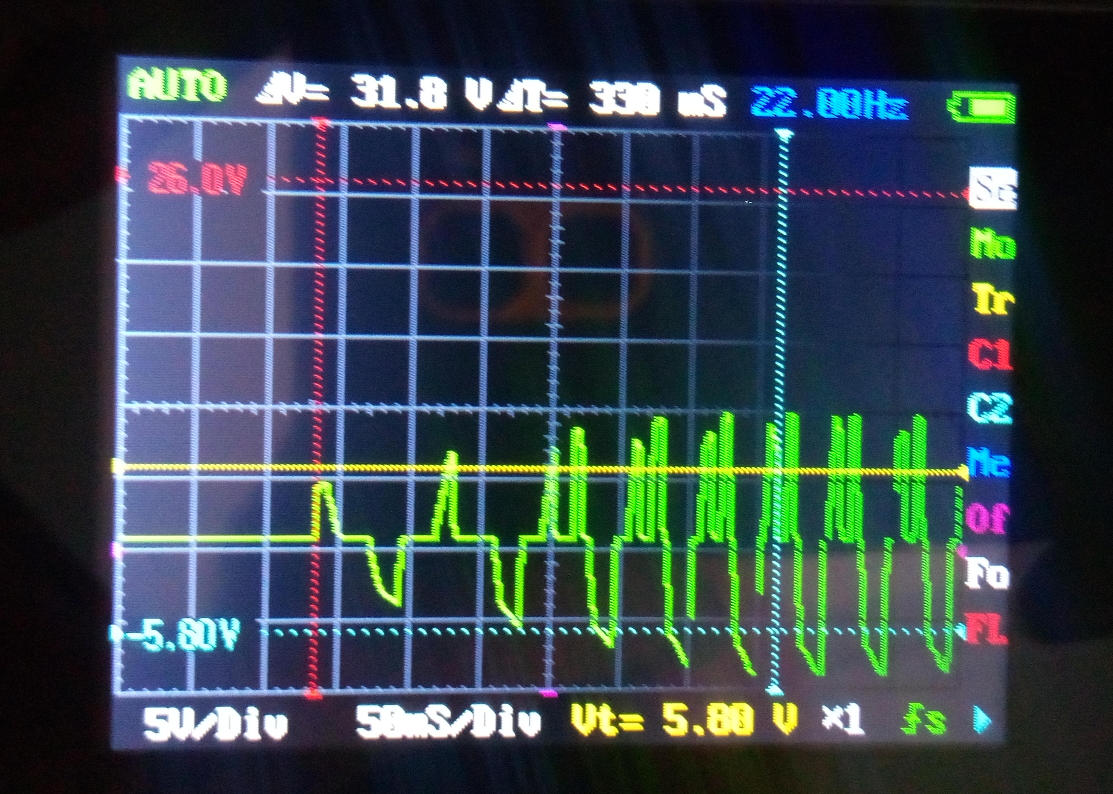 Here we can see the spin-up again, and a very strange waveform, with a double positive spike and a single negative spike. At this point the standlight capacitor would have been almost completely empty. We still have nearly 15V p-p. The scope can't measure the frequency with that waveform, but it's faster - perhaps I span the wheel faster. I suspect the double spike is because of how the light loads the dynamo at low speeds. Running faster the Luxx 70 changes the output to illuminate better at long range - it would be interesting to see how this loads the dynamo, especially as the low-speed mode is clearly asymmetric. The high speed mode turns out to be asymmetric as well, but different. I couldn't spin it fast enough for long enough for my camera to focus on the scope though.

BTW about 90% of the load is from the front light, so the rear shouldn't change things too much.

4
Which model of hub dynamo does the Cube Nuroad Race FE have?

14
Bottle dynamo vs. hub dynamo
9
How do you install a hub dynamo?
1
SON 28 Hub Dynamo "Rotation Lock"?
4
Hub dynamo, maybe loose contact; maintenance?
5
Do you need to ride gentler with a dynamo hub?
3
Replacing a normal hub with a dynamo hub
2
What kind of nut is used on Shimano hub dynamo with rollerbrake?
0
How does dynamo hub feel at hand?
4
Which model of hub dynamo does the Cube Nuroad Race FE have?
2
Dynamo Rear Light Problem