Why do racers follow the leader in a curve rather than take the shortest path?

Quite often in road racing cyclists will create a C-shape curve on the road, following the path taken by the peloton leader. 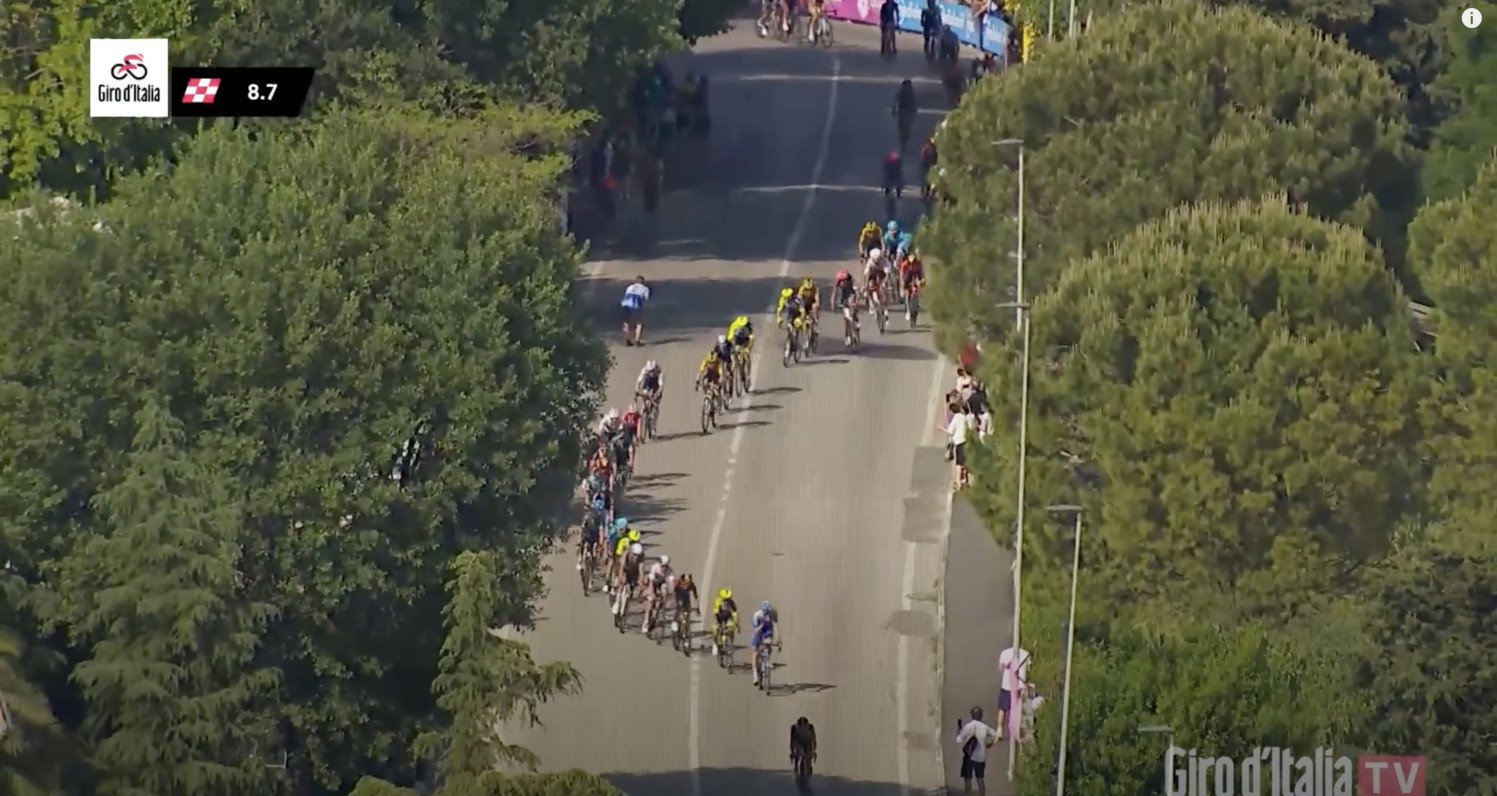 The peloton leader seems to create this curve because they're looking behind them (for some challenger they're tracking in one point classification or another, perhaps—could there be any other reason why the leader creates this path?).

But then the rest of the peloton follow the track. I have trouble imagining that the benefit of drafting is so high it outweighs the advantage of cutting it short and continuing straight. This is not quite a circle, but if it is, the extra distance is as much as 3.14/2, or 57% longer.

Why do racers follow the leader in a curve rather than take the shortest path?

Speculation #1: Might this be a sudden side-wind draft that forces everyone to lean (to the right in this case) and then turn to accommodate the leaning? If that's the case, why do they not stay (on the right, in this case)? Why do they return to the left of the road? (The road is closed for them.)

Speculation #2: Might there be an imperfection on the road that they can see, but that we can't see in recordings?

Speculation #3: "Everyone arriving within 3 seconds of another cyclist is awarded the same finish time." This rule was introduced (in 1953?) to avoid an entire peloton fighting for a slight improvement in ranking at the finish and taking undue risks of crashing the peloton. Might this rule also act here to eliminate the incentive of improving ranks?

race drafting
Share
Improve this question
edited May 26 at 15:52

I have trouble imagining that the benefit of drafting is so high it outweighs the advantage of cutting it short and continuing straight.

Believe it. Drafting can reduce the power needed to maintain speed by close to 50%, so there is considerable reason to continue drafting even if the lead rider takes a circuitous course.

Note also that the image you posted is foreshortened from being taken from far away with a telephoto lens. That 5m or so difference in placement from right-to-left-and-back on that road probably takes place over more than hundred meters, if not longer.

The 'leader' creates this path because they don't want other people drafting them. They want to either break the draft and create a gap (probably to attack) OR have others come around them and take the front.

In some cases it may be possible that people much further back could cut across that curve for less effort, but then they would also have given up their spot in a draft and have to 'fight' with someone further up the line to get back in the wheels.

The shortest path isn't all that much shorter. Your original calculation of 57% more distance in the curve assumes that the lead rider does semicircle loops, actually moving perpendicular to the road at the start/end points, rather than heading toward the finish. A more modest but still somewhat extreme curve would be a quarter turn, which would still have the riders at a 45 degree angle to the direct path, riding as much across the road as down it. In the quarter turn case, the looping path is only 11% longer than the direct path. If you actually were to imagine a full circle of riders in the picture from the question, I'd estimate this is even less than a quarter turn, so the distance savings will be even less than 10%.

A good draft can easily save 30% or more in energy costs, so it's a net energy savings to take a slightly longer path with a draft, compared to a shorter path without a draft. It probably wouldn't be efficient to draft a leader doing half-circles down the road, but the actual curves are quite a bit shallower and don't add very much distance.

Not answer; only a counterpoint.

No one "took the bait" so to speak, in the question's example.

Here is an example where the two followers did decide to lead. 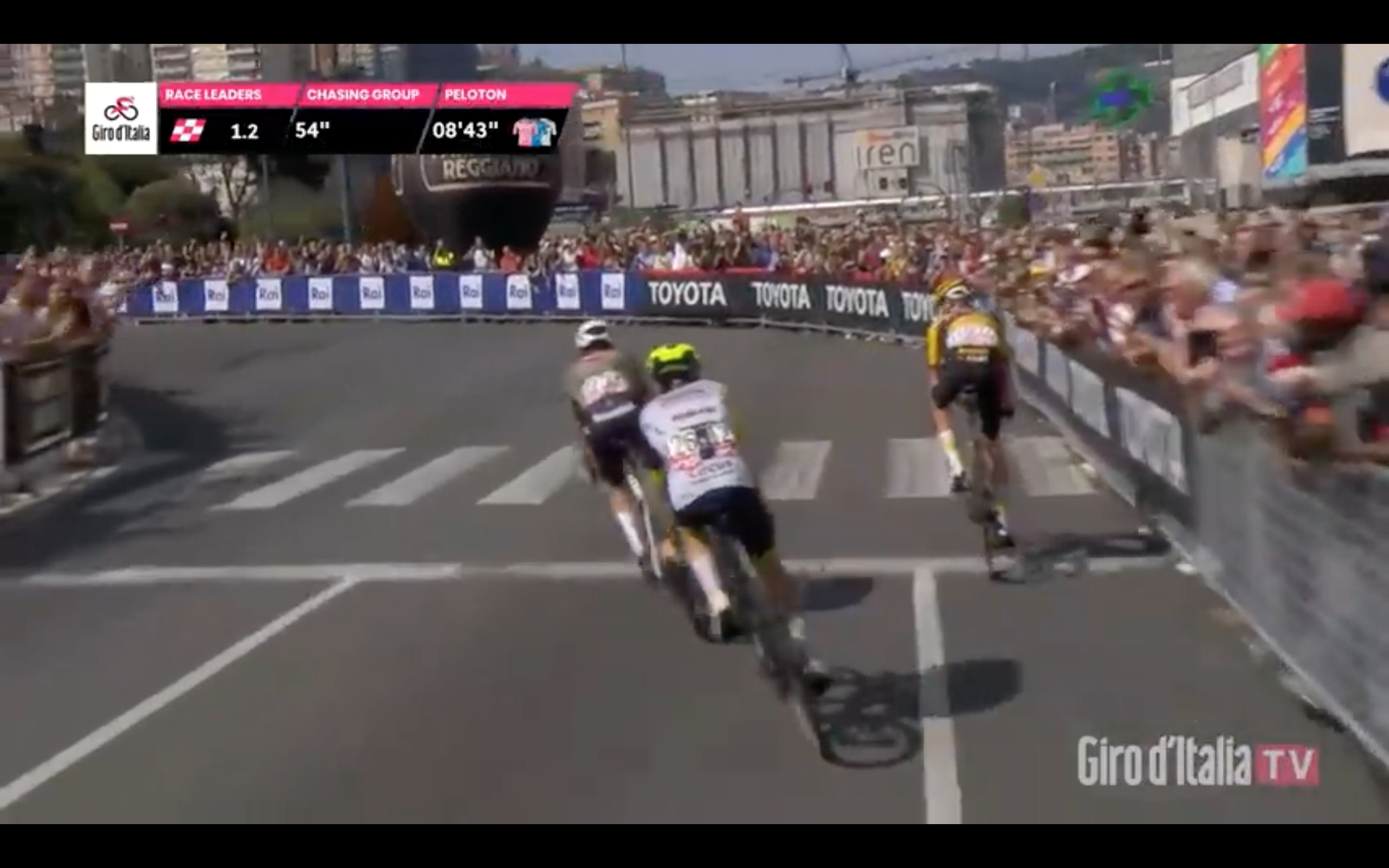 Gijs Leemreize (yellow jersey) is surely aware that to maintain his lead he needs to take a steep left turn, switching from the right to the left of the road.

But then, in what makes his abandonment of the lead look like a poker bluff, he immediately attacks. Had he attacked while he's leading, they would have seen him rise from the saddle and would have anticipated the attack. They would have stayed on his tail, even benefiting from his draft for longer (they're still ~1 km away).

The bluff worked. Stefano Oldani seems surprised to see Gijs Leemreize take off. But Oldani does not immediately counter-attack. He only catches up and bids his time, using again another draft from Leemreize, and ultimately wins the stage.

Essentially it appears that Gijs Leemreize overestimated the energy he has left on that day. By the time Oldani catches up with him (second 42 in this video), he holds back, keeping what he has left for their ultimate sprint.

This amount of strategy in road cycling clearly makes it much more than just a "who got the most power?" game.

Not the answer you're looking for? Browse other questions tagged race drafting or ask your own question.