What applications exist for bicycle power, besides propulsion? [closed]

This question does not appear to be about bicycles within the scope defined in the help center.

The dynamo light uses the power of a bicycle and rider to generate light. Are there other such inventions, intended either as accessories to the bicycle, or intended to be powered by bicycle mechanics to perform some other work than physically moving the rider or cargo?

I'm curious to know about any bicycle powered inventions, successful or not.

power dynamo bicycle-power
Share
Improve this question
asked May 24 at 2:28

Bicycles are simply a method of generating rotational mechanical movement from biological sources.

That rotational energy can be used for anything where a motor would be used.

The items below have all been successful in that they accomplish the original design goal/intent, but we don't really see them in modern life because small electric and liquid-fuel motors do the same job faster and with less sweat. 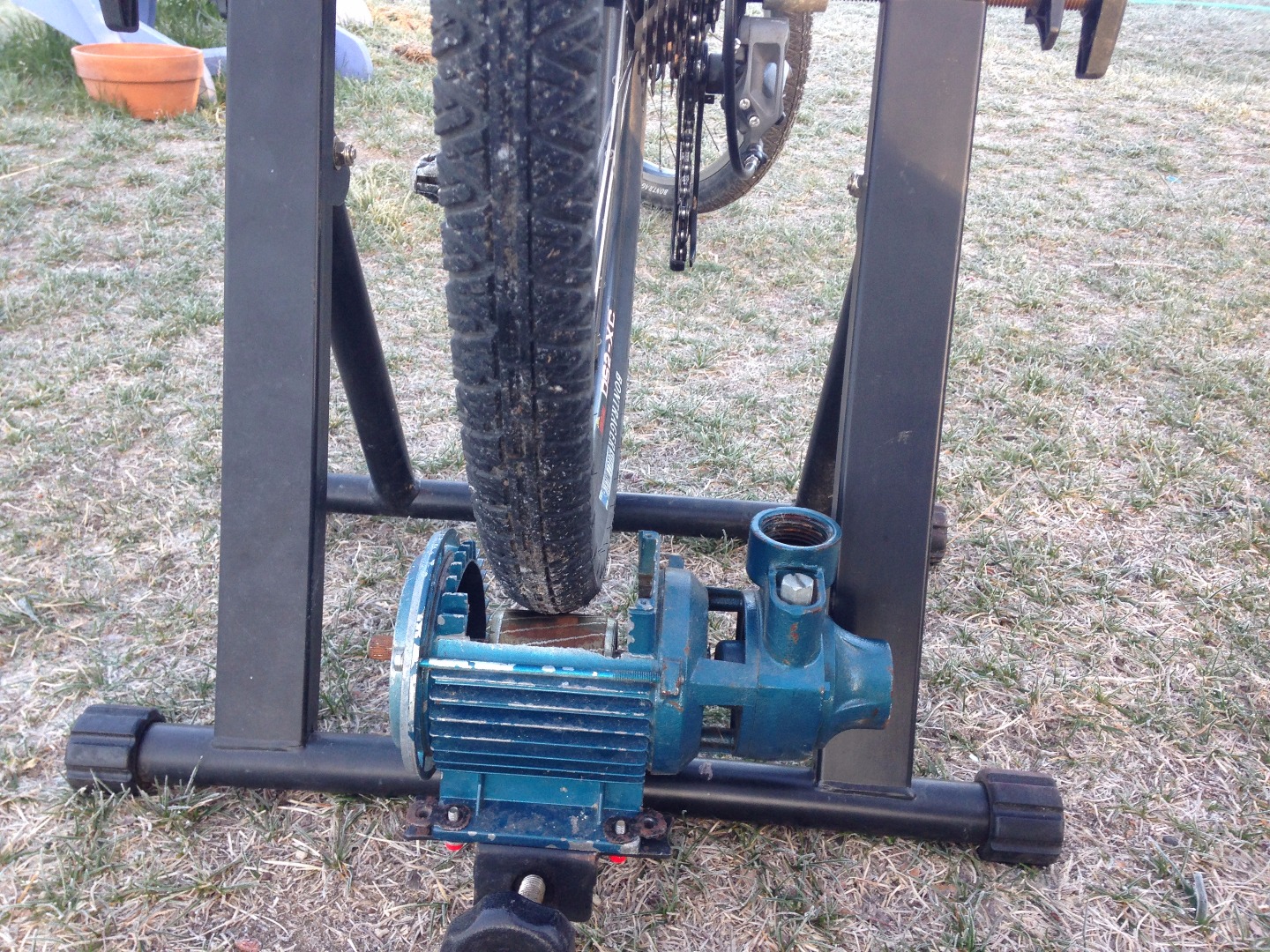 with sufficient plumbing, a water source, and a purpose a bicycle can lift water.

This one is essentially a "rubbee" style of interface so a normal bike can power the tool by tyre friction. This bike could be taken off and used for other purposes. This will cause wear on the tyre just like a set of rollers, so tyres will wear faster.

By comparison, a dedicated setup might have replaced the rear wheel, locating the pump's axle where the wheel's axle was, and fitting a suitably-sized cog so the chain could drive it. If the derailleur was left in place then several cogs could produce different flow rates for the same RPM, but the bike can't be used for anything else.

Air pump Bomb shelters need ventilation, which often needs to be forced so to not asphyxiate the occupants. Air raids of WW2 were very likely to stop any electricity flow, so a human powered air pump was the answer. 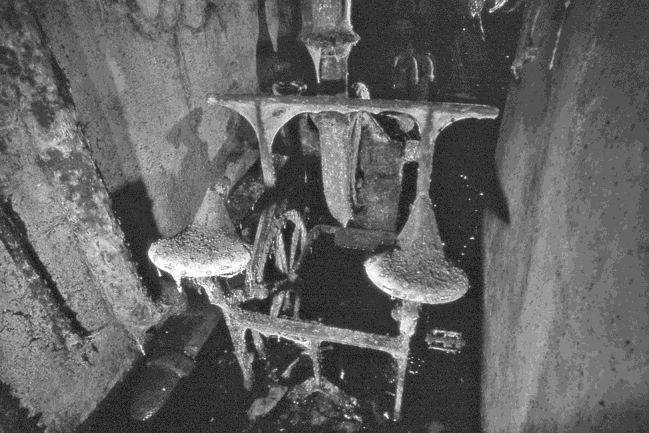 In the same environment, a pedal-powered generator could run a radio set for information, and for lighting. They also provide warmth, for the riders.
A bike-style setup could be installed as a backup to main pumps, enough to keep the mine running while repairs are effected.

Lathe It has pedals, crank, and a seat. The same general setup could run a die filer, a scroll saw, a small bandsaw or circular saw. A large flywheel would help keep the machine driving forward if it hits something tough. 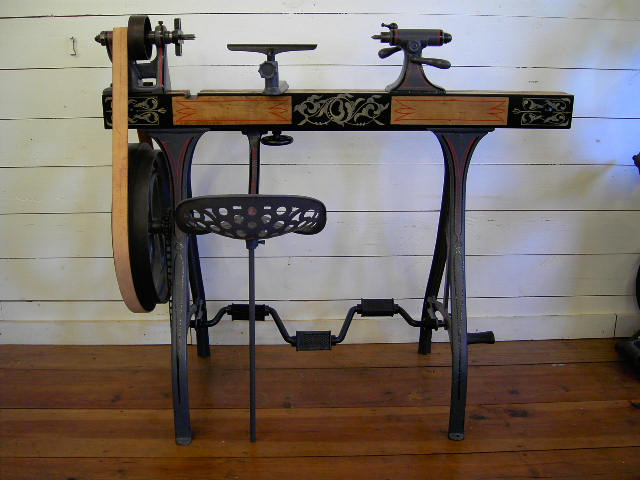 Spinning wheel Most spinning wheels were treadle-powered, but by the same token they could be pedal-powered.

Logsplitter Hydraulics are awesome and terrifying at the same time. With long duration low power input, a hydraulic ram can build some insane pressures resulting in massive force multiplication. Here its being used to split logs for firewood.

Rural village Concepts like the Dynapod and Energy Cycle were intended to be a human-powered stationary engine, that could run a range of devices in the field. 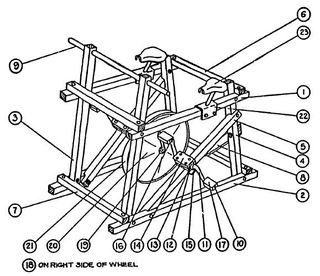 These could run in direct drive 1:1, or 3:1 or 10:1 so the speed and torque requirements of the driven gear were met.

These could even be used to till/plough a field by dragging a weighted implement across the ground on a wire rope.

They usually have a single very large pedal that tilts rather than rotates, but they do have a large flywheel that looks to me very similar to the bicycle wheel (image credit). 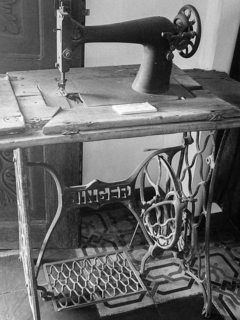 Bike-powered smoothie makers are a thing you can rent or buy. They're most often seen at events promoting science/engineering careers to kids, or sustainable travel.

Bike-powered electrical generators are available (example). They're most likely to be useful for powering small but important loads during power cuts - I heard of someone using one to keep his tropical fish alive when he lost power to heat their tank in winter. I occasionally wonder about DIYing one using a dumb trainer or rollers.

Some exercise bikes power their own electronics, but that takes no more than a typical dynamo would put out.

A mobile device usually charges with 5 volts (USB) and charging is possible with less than 1 ampere rates -- usually the minimal current unit being 0.1 amperes, the unit of current in USB. This means less than 5 watts is enough to charge a mobile device (minimum 0.5 watts). Nominally dynamo hubs produce 3 watts, but that's just nominal when used with a light designed for dynamo use. You can actually very easily get at least 6 watts if not more from a dynamo hub by modifying the light or "light" (such as battery charger) to appear as a higher resistance device. At very high speeds, a dynamo is not a constant voltage 6 volt supply but more like a constant current 0.5 ampere supply. So if you have incandescent or halogen lights, you can easily wire two in series: it'll be worse at low speeds but better at high speeds.

A bicycle for charging mobile devices is far better than a portable solar panel. I recently bought a 21 watt USB solar panel designed for hiking with a backpack. The theory is that you hang it from your backpack and it then charges. I wondered, fully knowing that 21 watt panel is more like a 1 watt panel when in the shade, how it could possibly supply 5 volts at 2 amperes (10 watts) to a single mobile USB powered device. I was hoping the mobile device would be smart enough to regulate the current so the voltage stays at 5 volts even if the panel is shaded. However, apparently the manufacturer of this hiking solar panel decided instead to cut power when the current requirements cannot be satisfied. The result? If the panel is in the shade, it doesn't work. Unless it is facing sun well enough, it doesn't work. If only a single cell is shaded, it works like all cells would be shaded: it doesn't work.

The 21 watt USB solar panel weighs 916 grams and if riding with it connected to the backpack, the panel and/or backpack makes your back sweaty. A hub dynamo that's useful for USB-charging a mobile device weighs 560 grams, whereas a comparable front hub would weigh 160 grams, so that's only 400 grams of added weight.

The solar panel is practically useless. It maybe produces 30 watt hours per day on the average if you spend 12 hours outdoors during the daylight hours (less if spending less time outdoors). A power bank with 72 watt hours weighs 360 grams, whether loaded or not (Einstein's E=mc2 adds very little mass). So you get 183 watt hours for the weight of the portable solar panel if using power banks. That's more than 6 days worth of solar panel power production.

However, with a dynamo you get power forever as long as you remember to eat and ride your bike, for only a weight cost of 400 grams, not much more than a single portable power bank.

A very common pedal-powered device was the spinning wheel used to spin wool into yarn, or flax, or cotton...

I've tried to use one of these. It's a very different experience from a modern machine, because the big flywheel means it can't easily stop. The learning curve is really stiff.

Running hydraulic systems (to move winches) on high-performance racing sailboats require a lot of power - and if rules allow bicycle-like setups claimed to allow for more power than hand-driven once when other sources of power are not allowed/not suitable.

In the mid 1920’s Alfred Traeger invented the pedal powered radio, revolutionising communication in the outback. The invention was integral to the founding of the Royal Flying Doctor Service, allowing the Service to make contact with the people who needed their help and vice versa

There's a photo here. Batteries were rubbish for powering a radio in the 1920s, if you needed high enough power for long distance communication, and you didn't plan to use the radio until there was an emergency.

Clever people have create peddle kayaks, and they now are produced by large-scale manufacturers.

The operator "paddles by peddling". The peddling action causes a propeller to spin under the kayak, resulting in propulsion. 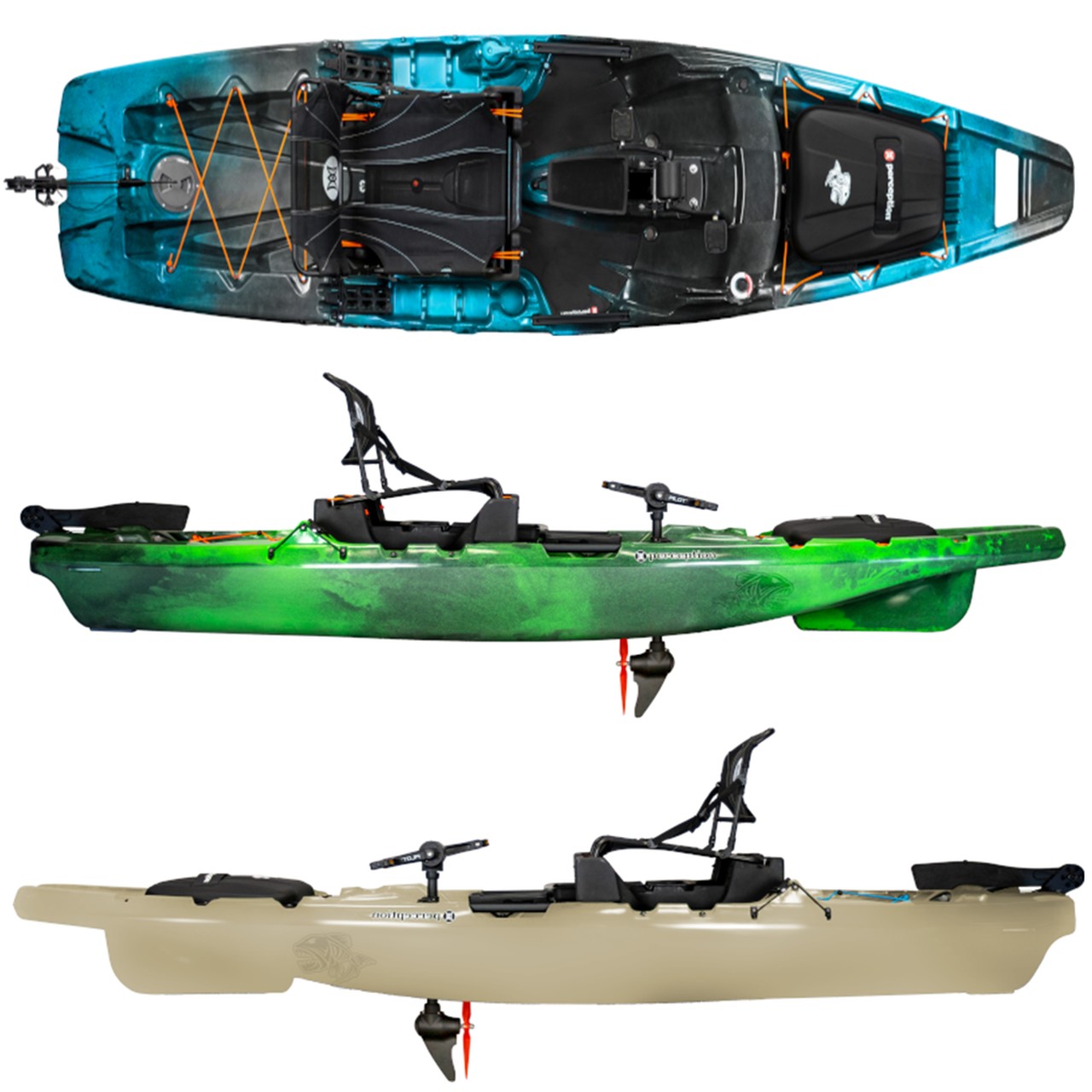 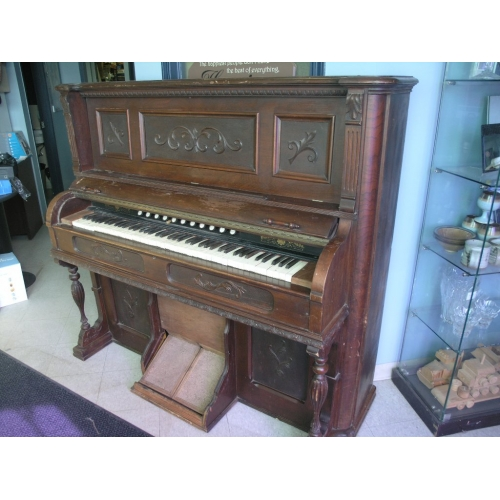 Some old air-powered reed organs had pedals you'd have to keep moving to keep pumping air. Here's a video of someone playing one from the 1880s:

I've seen half a bicycle used to power a forge blower. The wheel was filled in with concrete to act as a flywheel, and the pedaller sat comfortably on an old sofa, providing air to the forge when required. I can't remember how the blower was driven, but probably a friction drive off the tyre, or a belt around the rim since they need to spin pretty fast.

I've seen more than one case of a bicycle frame connected to the push bar of a lawn mower. Granted, the motor is usually left connected and functional to spin the blade, but one pedaled to move it around the yard.

Here is one where the pedals actually spun the blade, too: 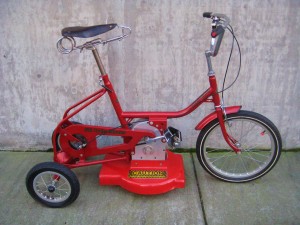 Technically, I suppose, this is a trike, not a bike, but close enough, it's pedal powered. 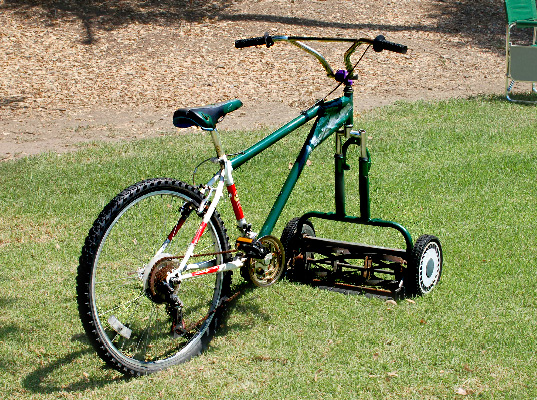 The front suspension is a nice touch, but the reward facing bars indicate that someone built this for his kid to ride.

Pedal powered radios were important in the development of the Australia Royal Flying Doctor Service in the 1920s. They were invented by Alfred Traeger and also used for the School of the Air. Wikipedia has further details here. 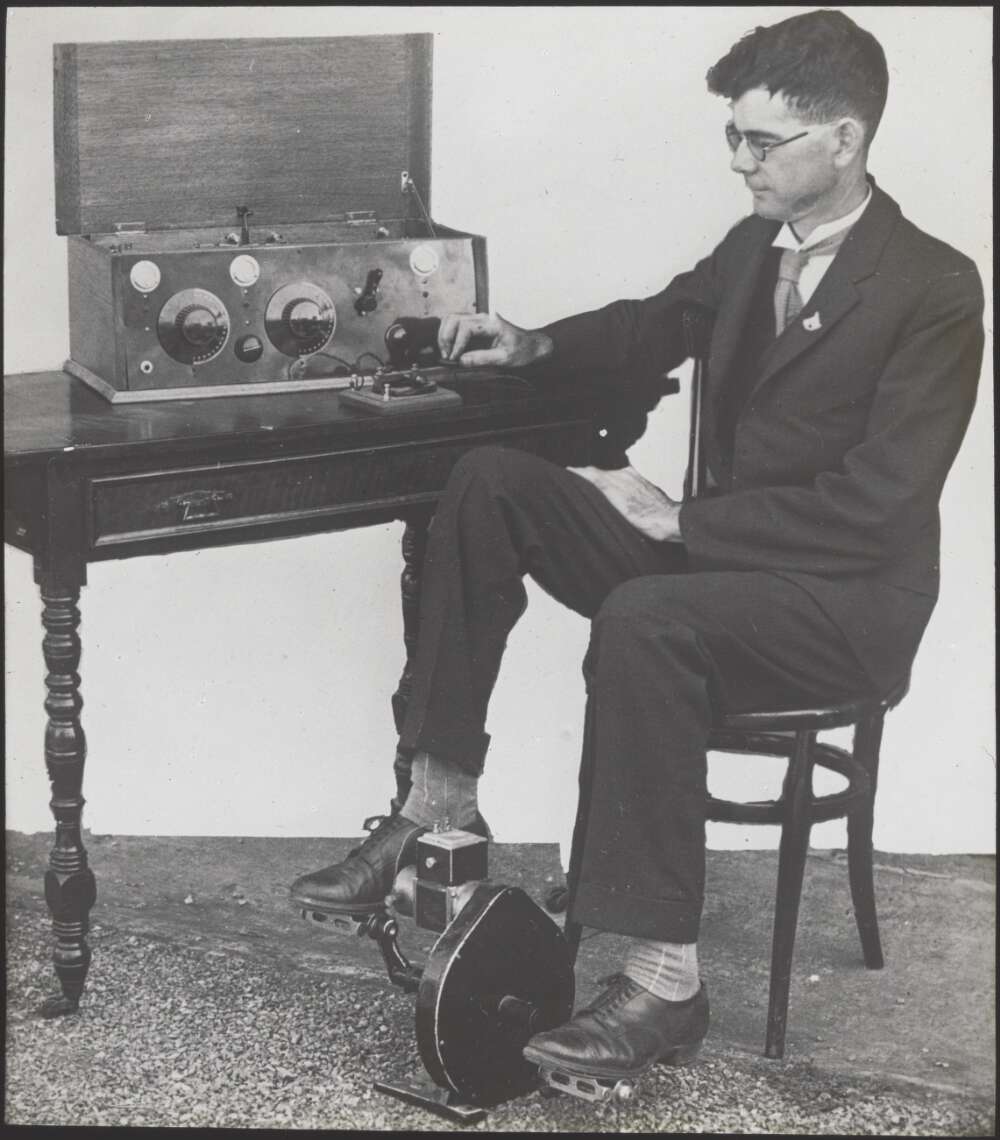 The picture of Traeger is from the National Library of Austraila.

Several years ago there was some hype around a tricycle with built in water storage. Pedaling the trike activated the drive train an a small (peristaltic?) pump that pushed water through a carbon filter onto a secondary (clean) storage tank at the front of the bike.

Once home, the drivetrain could be disconnected, and you could pedal the trike in-place to filter the rest of the water.

There's a ton of examples in developing countries.

In India, the pedal powered loom is used at industrial scale:

Not the answer you're looking for? Browse other questions tagged power dynamo bicycle-power or ask your own question.

26
How do bicycle power meters work?
11
Are there any high power bicycle generators?
1
Which are better for reproducible power output: Mag- or Fluid-trainers?
11
Does anyone make a dynamo light buffer battery that will keep it going at full power?
4
Dynamo bike lights - unknown short circuit cause
8
What method or algorithm is used for computing power curve on Strava?
3
App for displaying 30s rolling average power
4
What to consider buying a single left side power meter from stages?
2
Dynamo Rear Light Problem