I have an Ultegra RD-R8000 (GS cage) that has chewed up multiple shifter cables (Dura Ace and Jagwire) at the cable bolt. Seems that when in a high gear (11t chainring) the cable bends over the clamp edge and starts to fray there. Have any of you all found a fix for this? I really don't like replacing cables every 2000 miles. What the heck kind of bad design is this?!

So for now, maybe my solutions are:

UPDATE2: Well guys, just to close the loop on this I emailed Shimano customer service and sent very close up photos of the derailleur. They responded:

"After reviewing your case with our QA team we have found there may be an issue with your pinch bolt and that it may getting over torqued due to a bad plate. Manufacturing side not user caused. We will be sending you a new chain, derailleur, and a cable set kit."

I had heard about this design issue and that there was a correction of sorts on another forum and it seems that it is true. Hopefully anyone else with a similar issue can obtain this same level of service and support from Shimano.

Thank you all for your input and help with this. 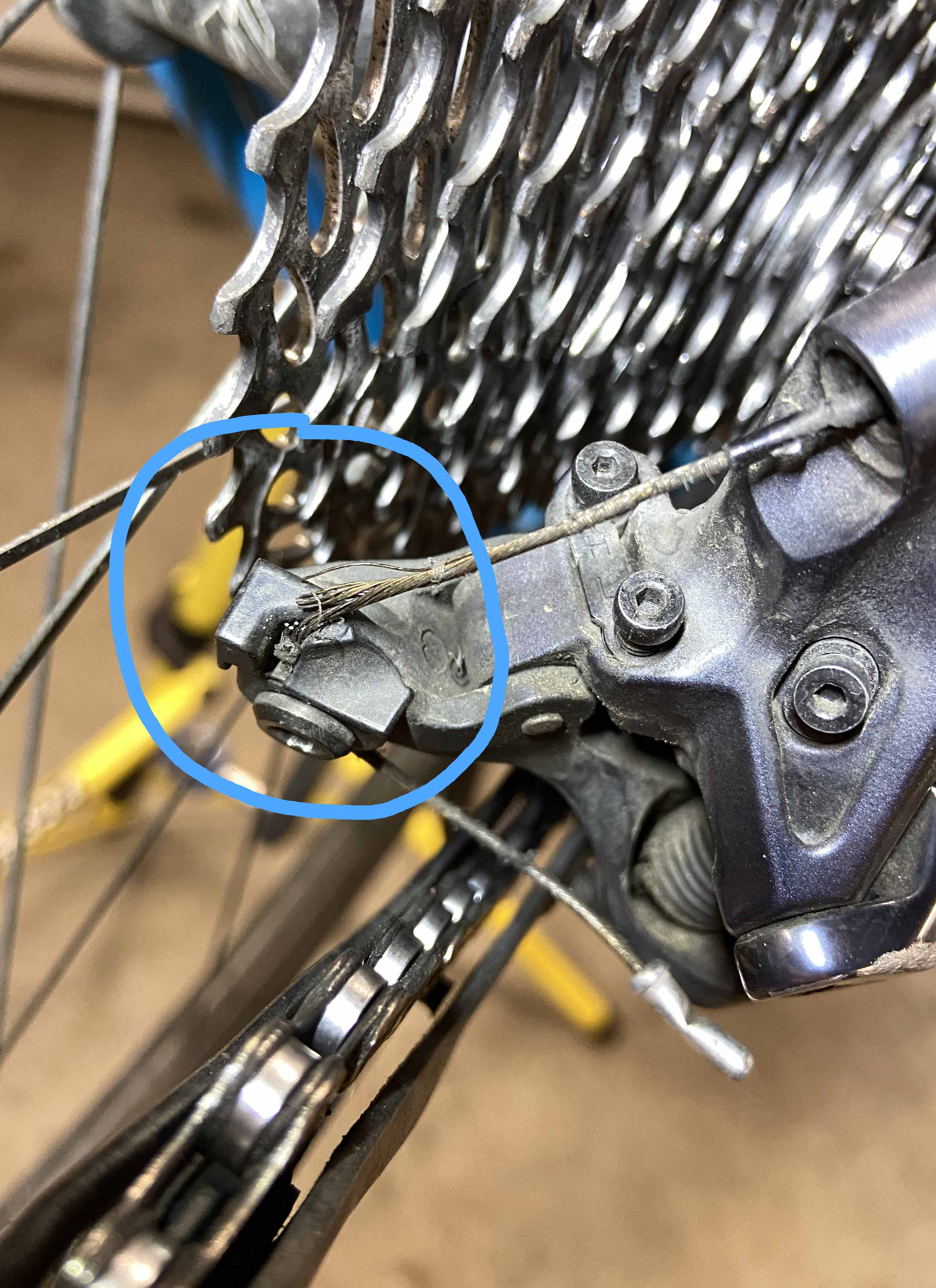 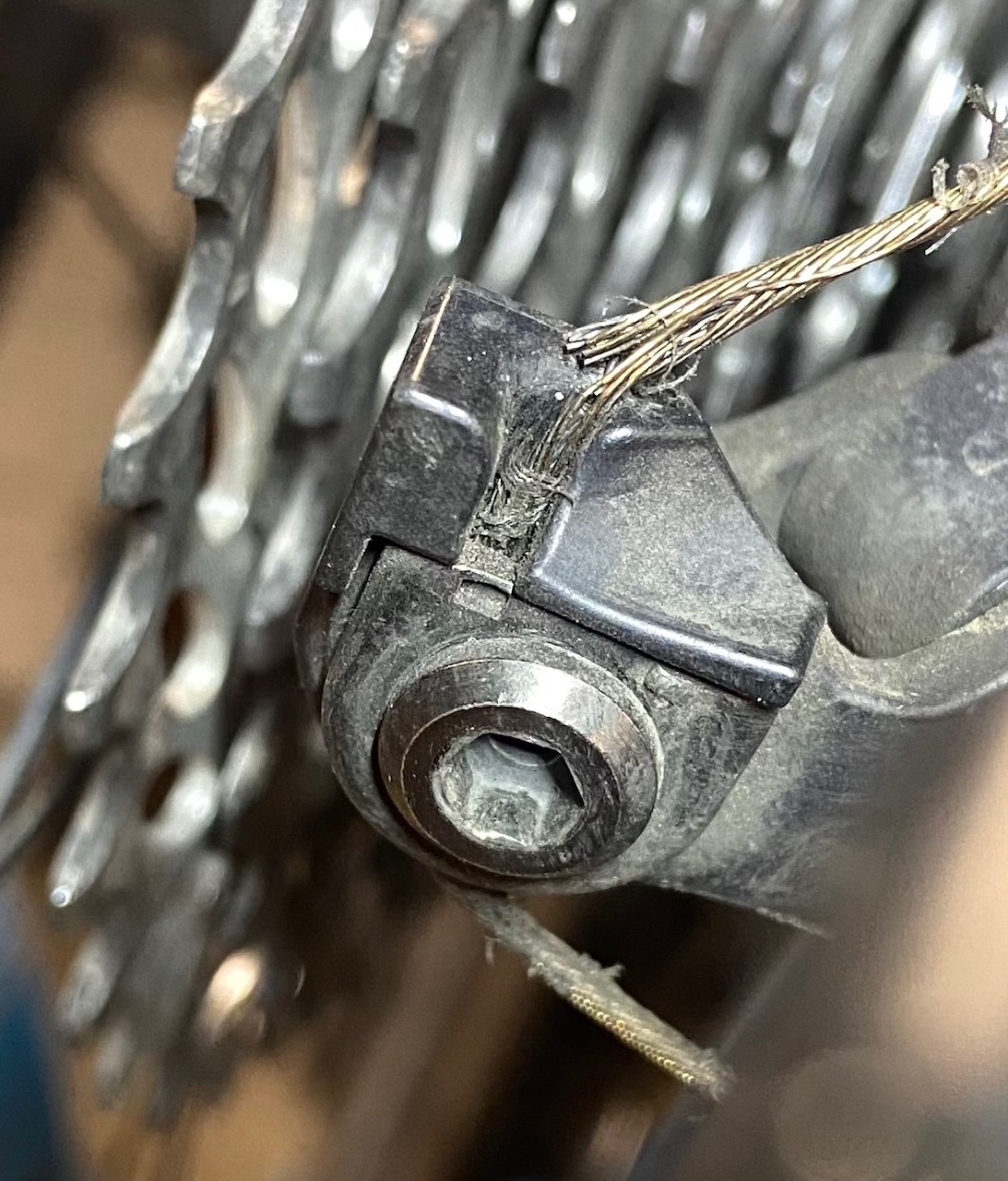 I would check to see if there are any sharp edges at that interface where the cable is fraying. I run an 8000 RD as well and have never had a problem with cable fraying there. A sharp edge is one possibility.

Another possibility is a little localized corrosion accelerating wear at that point. A close look at your picture reveals that you are using a Shimano (or other) coated cable. That Teflon coating is slick at first, but with time, it begins to develop tears in the coating, which could allow water/moisture to wick in between the strands of the cable and be retained there for longer than if the cable were not wrapped. Your picture also makes it appear that you ride in wet conditions at least some of the time. I stopped using the Shimano Teflon wrapped cables because the Teflon would come off the cable and bunch up in a key spot and crate excess friction. That is not your problem, but regardless, I changed to the Jagwire slick stainless ones since my bad experience with Shimano's Teflon coating.

Here is a picture of my Ultegra 8000 (with the shorter SS cage, which does have some differences besides the cage length) from close to the same angle. I have it shifted into the 12t sprocket instead of the 11t to ensure tension on the cable. I don't see the same sharp angle in the cable that you show in your picture. That may still be differences in the angle of the each camera relative to the RD. 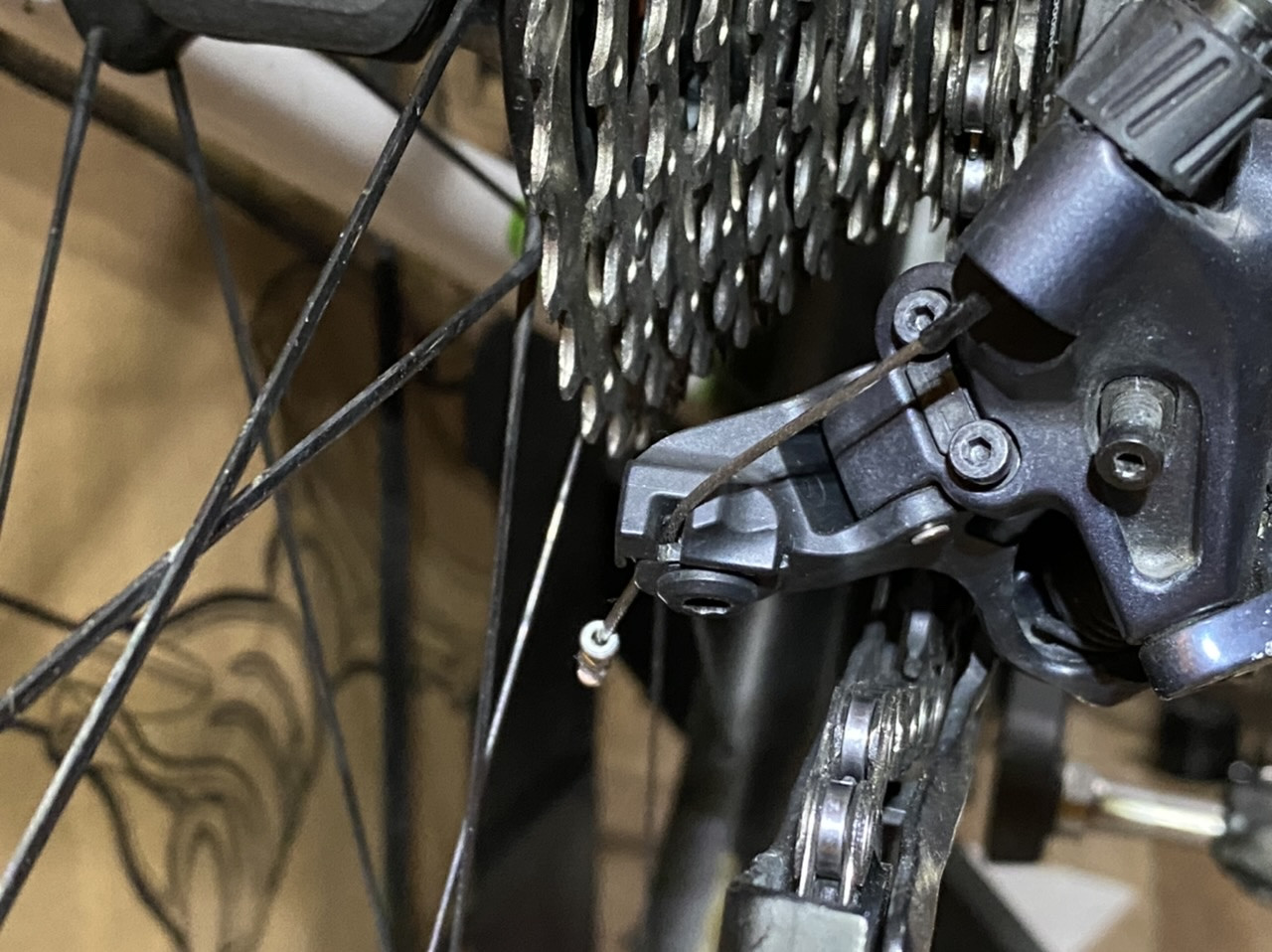 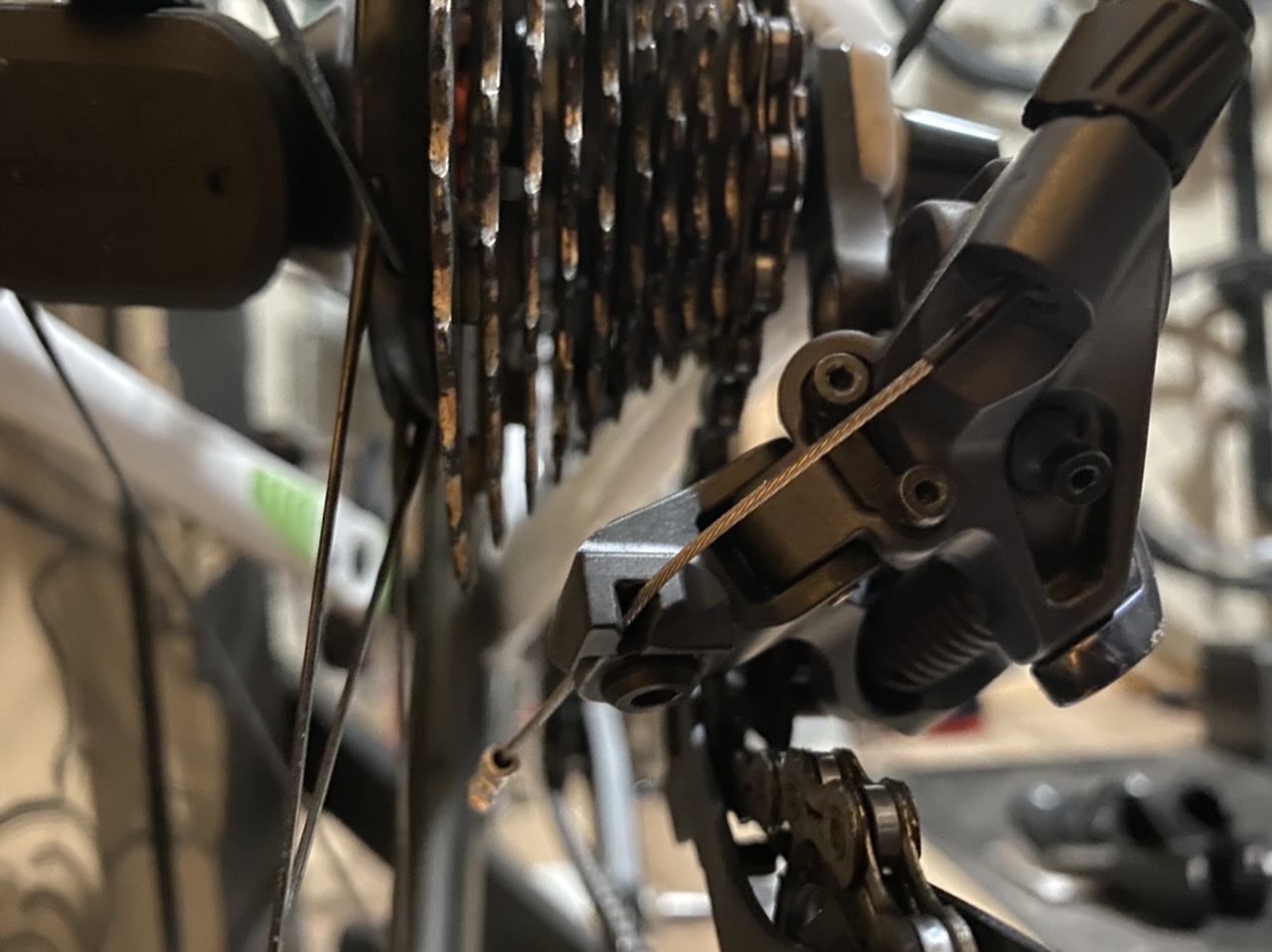 Curious problem - it's clearly related to flexing of the inner cable at this pinch bolt.

I'd be tempted to put some heatshrink cabling on a new inner cable before clamping, such that the cut end butts into the derailleur when in lowest gear. Not sure if that could interfere with the clamping action of the bolt though.

Another thought, is the pinch bolt assembled correctly? There looks to be a cubic plastic block acting as a thick washer under the bolt. Does that have a large curved surface on the other side, invisible in the photo ?

Shimano's dealer documentation for this part is at https://si.shimano.com/pdfs/dm/DM-RARD001-02-ENG.pdf and on page 17 shows a similar setup - there is no mitigation for the angular changes due to shifting. 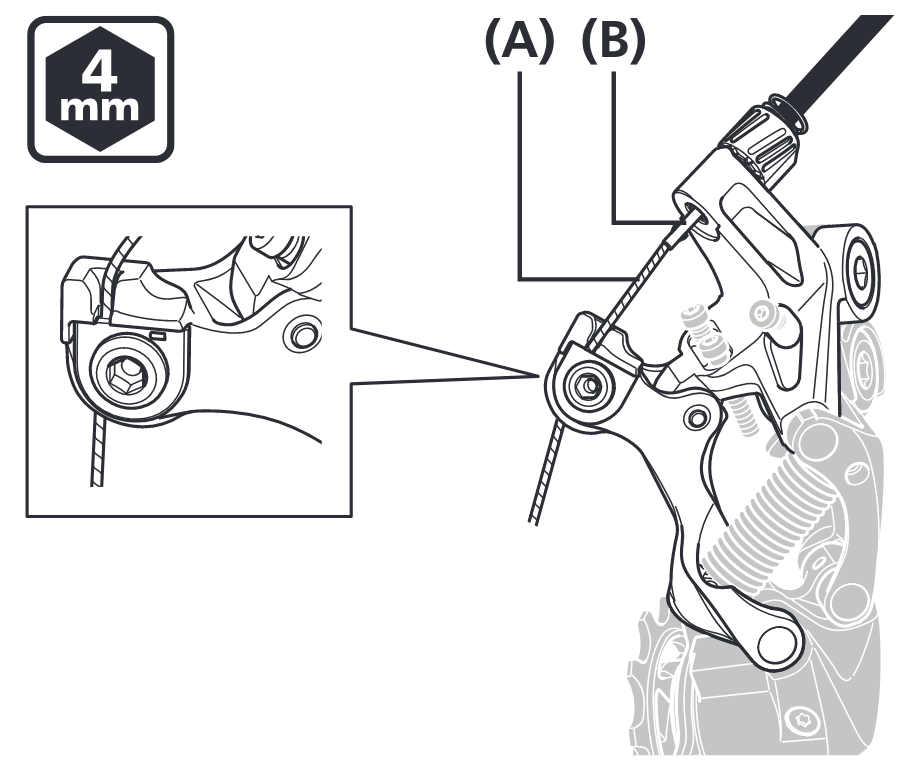 On seeing your second photo, it feels like the rear mech is bent, somehow. That angle is extreme, and the line-drawing suggests it should be far less-acute.

Ted's first picture shows far less of a twist, but its a subtly different model.

Your easy fix is to throw money at it and replace the rear mech and inner cable. However that's real money.

I'd get the existing mech off, clean it, and have a good look over it. Compare with any pictures you can find online. Evaluate if there's any bends, and decide if you want to risk un-bending the part. If it breaks, you needed a new one anyway!

Final thought - in the 11T there should be no or almost no tension on the cable - the mech should be resting on the high limit screw. The only time its tensed is when you're changing to a lower gear.

Not sure what that implies sorry.

It is unequivocal that a bowden cable being flexed back and fourth over a sharp bend like this will eventually break it. Bowden cables have fancy engineering math for the minimum radius bend they can handle without breaking. On these Shimano derailleurs that math isn't necessary because it's getting bent at an angle; there is no radius in any meaningful sense. It will break. The sharpness or smoothness of the last contact surface before the bend is probably a factor at some level, but it's not the main problem.

There's not really a solution for this. Probably the closest thing to a solution is that they're even more sensitive to it if the cable anchor position is changed in a way that puts a previously clamped area in the zone where the stress occurs, so by being careful about that during setup or maintenance you might be able to make it a little better.

The polymer-coated cables that the Shimano road 11 systems rely on to work their best also don't really do their thing much longer if at all than around a couple thousand miles.

Note also that there's confluence between cables breaking because of this issue and the rider being strong and high-mileage. The more you hang around in the high gears, the more the issue is exacerbated. At the end of the day the answer is don't ride contemporary component groups, because no part of them is really even trying to cater to the needs of actual strong, high-mileage riders who need reliability more than frills. This issue wouldn't have been an acceptable compromise otherwise.

Like @Criggie says, it looks like the pinch bolt isn't assembled correctly - normally, Shimano components have a grove in the mech (and sometimes the washer) to indicate the correct cable path.

My guess is that you've rotated it, and are over tightening the pinch bolt to correct for this. If you compare the images of yours and @[Ted Hohl's], the washer doesn't seem to be covering the cable routing as completely on yours as it doesn't on Ted's.

There is visible damage to the derailleur:
All other pictures / drawings show a U-shaped notch that guides the cable to the bolt. Half of this part is broken away, leaving a jagged edge that is chafing the cable. You could try to smooth that edge or mount another clamp with the old bolt, so that the cable gets a new smooth path. Maybe some bike mechanic knows a way for a permanent repair, else it is replacement time: sorry!

Cables should be changed at around 2,800 miles anyway to prevent the heads from breaking off inside the shifter. On 2 occasions that happened to me at 3,000 miles. I was thinking your cable had been clamped there and slipped. I have not seen them break there.