Someone else's lock on my bike

Earlier today, I had to leave my bike in the street to run some errands. Just after I was done attaching it to a barrier, a person came to me and asked me about my kryptonite lock as he was locking his own bike next to mine (it sounds mundane, but it's what got me thinking). When I came back a few minutes later, he had locked his bike to mine in addition to the barrier as you can see here: 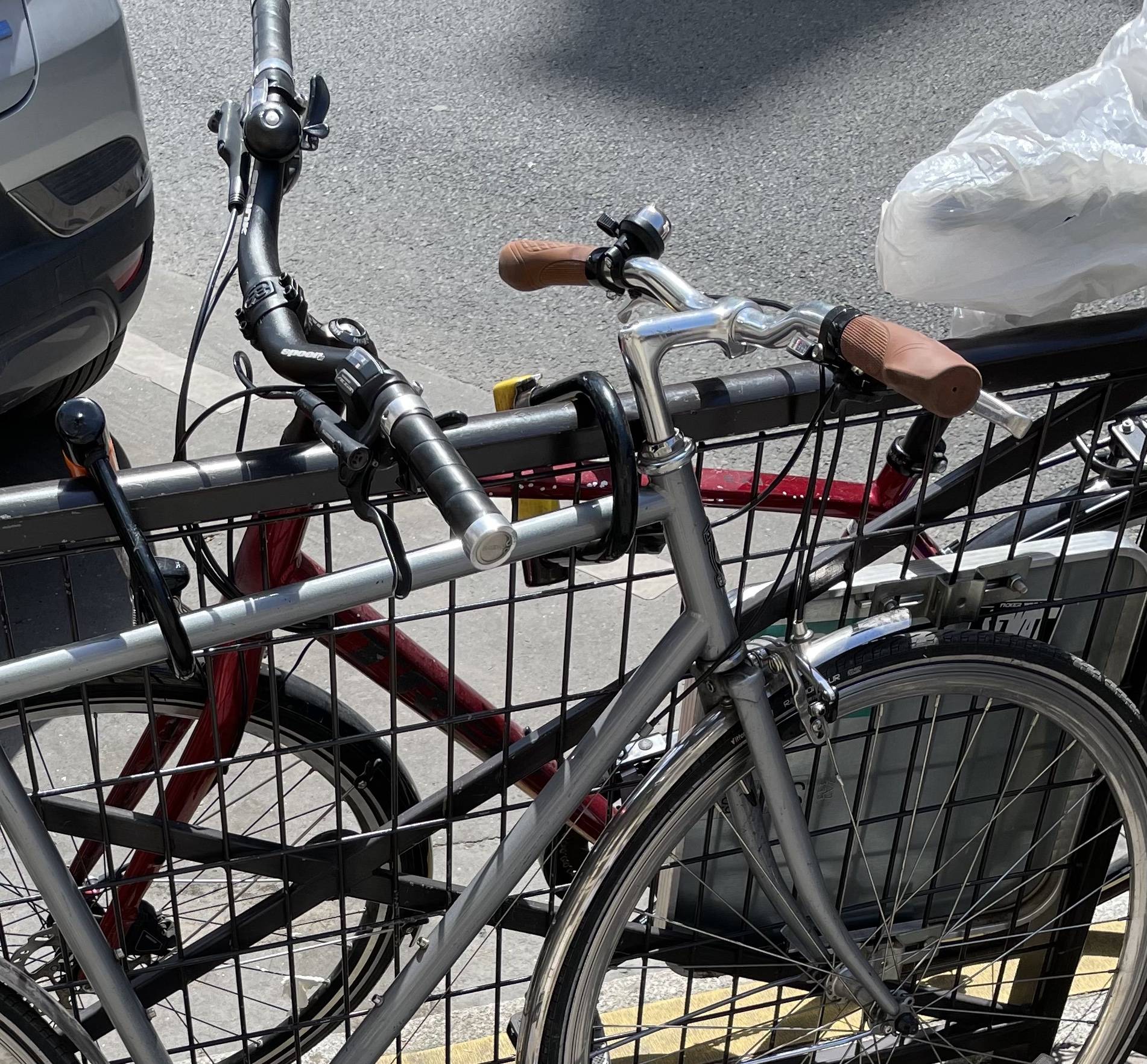 I waited for him for a while but he didn't show up and I needed to go back to work so I left. To my knowledge, there are two options:

Should I just go 'fuck this guy's bike', rent an angle grinder and cut open the lock?

Additional informations: it's a quiet street, the barrier is in front of an elementary school and the police was no help at all as they told me they don't recommend damaging someone else's property, but that I would probably not get in trouble for doing so in that case.

Another option if you're planning on cutting the lock, and don't want to leave their bike unlocked:

If you don't want to donate your lock

Also, if you really want to, you could try asking them to send you an electronic payment (cash app, venmo, paypal, crypto, etc) to cover the cost of the lock and the cutting tool rental, before you give out the location

I've heard of this being a tactic to encourage you to accidentally leave your bike unlocked, so they can come back and steal your bike later, but on balance it could just as well be accidental.

If you think it's the former, then cut their lock and leave it behind.

If it's just a mistake, then waiting it out is inconvenient but the polite answer. Supporting this is that your bike isn't a fancy race bike and probably doesn't have a high value to a thief, and that if redbike-rider was standing on the far side of barrier, they might not have even seen your greybike's top tube for the black barrier in the way.

Yes, it's really annoying, but "never attribute to malice that which is explained by stupidity" or Hanlon's Razor.

Destroy the offending lock. You are wasting time and energy worrying about his feelings when it was his mistake that cost you time and money.

Those are the only two reasonable options I can think of.

I would wait it out unless there is some compelling reason to damage the lock and leave the other bike unlocked.

50
Best type of bike lock (materials, style, etc.)
7
U-lock stuck on a bike
4
Bike lock for a Mountain bike with easily removable wheels
16
Can a chain-lock be better against cutting than a U-lock?
4
Would an original Abloy padlock and [toughened] chain make a good bike lock?
1
Key Stuck in bike lock!
4
Trouble with spiral folding bike lock - jammed
3
Lock jammed on bike
7
Does Abus print blind bitting codes on their D-Lock bikes (or do thieves go through the trouble to
1
Recommendation for easily breakable bike lock