How do I fix an Avid BB7 Outboard Pad that Doesn't Retract?

A friend came by with a Bike Friday with a rear BB7 disc brake that no longer worked at all. The adjustment was way off, a result of the undiagnosed fact that the outboard pad wasn't retracting anymore. How could I fix it?

This is apparently not an uncommon problem, but the fix isn't necessarily simple to do -- especially the first time around. It took me an hour and a half to figure this out, so hopefully this saves some time for people.

The problem is discussed at length here, and the solution as well, but how to get it done isn't clear. You do not have to disassemble the brake to fix it. However, it helps to understand how the mechanism works: 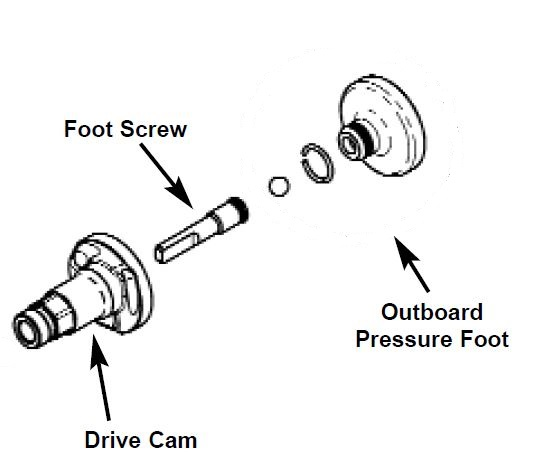 If someone twists the outboard foot screw too far clockwise, this can actually disengage the pressure foot. It won't pull back anymore, and only the little retaining spring in there (normally meant to just keep the pads on the pressure feet) will push out, so there will be a constant brake drag.

The pressure foot needs to be shoved back on/in, and this can take a decent amount of force. That linked thread says that shimming the pads and/or using the rotor and just pulling hard on the brake lever can re-seat it, but it didn't do the job for me. This is a friction fit, apparently.

Finding a suitable shim isn't easy. First, the shim needs to be rectangular, so you get a parallel/orthogonal push. Next problem, the pressure feet on both sides aren't totally flat. They have a protruding button in the middle (which retains the brake pads by fitting into a hollow), so you need a shim with a hole in it, or two identical flat pieces that will work on either side of the buttons.

I was going to drill some aluminum stock I have, but then I used a pair of 8mm hex wrenches, followed by 10mm hex wrenches. Two of these could be place inside the caliper body, one on each side of the button, then the inboard adjuster used (with a t-25 torx driver) to shove things together. After I reached the limit of what the 8s could do, I unscrewed the adjuster, put in the 10s, and repeated.

This did the job easily, after I spent and hour trying to shove that foot back home by other means.

Oh, after you clean would be a good time to put some dry lube on the cam and pressure foot (and inboard adjuster threads). I used dry because it won't migrate or attract and hold dirt. This probably made the reseating a lot easier too, as I had much less friction on the inboard adjuster screw threads.