Choosing parallel side or main road when route mapping

When mapping routes, I often come across sections where there are roads that run parallel to each other with a block or two separating them. Often if one is a main road the other is a secondary road or if secondary then other is tertiary.

Which should I choose?

Issues: The primary is typically wider and a bit straighter, but you have more passing traffic to deal with and more vehicles entering/exiting the road. The other road though likely not as wide nor as straight, may be more scenic, has less passing & entering/exiting traffic, but you have to potentially deal with vehicles exiting driveways, which often have more blind spots than entry/exits on the primary road, plus more pedestrians and/or animals, possibly. Is it a 6, half dozen type situation, or statistically speaking one type is safer than the other? 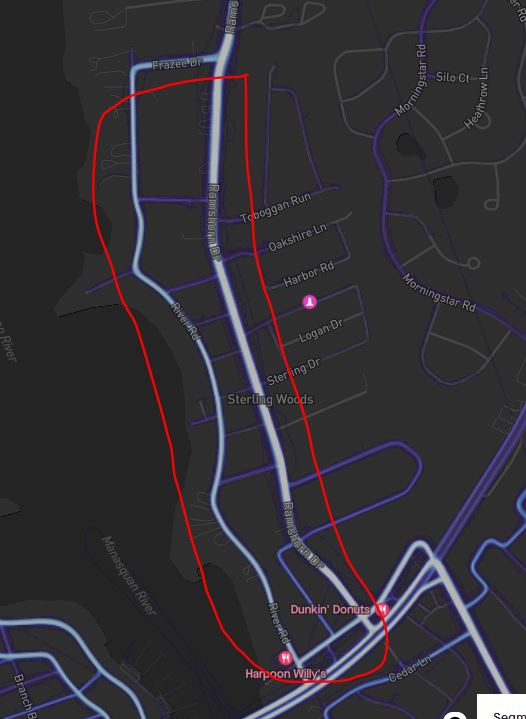 JP DJP D
10144 bronze badges
New contributor
JP D is a new contributor to this site. Take care in asking for clarification, commenting, and answering. Check out our Code of Conduct.
4
Add a comment  |

This is a difficult question to answer with anything other than "It depends." but I will give my criteria for choosing between alternative routes, and then the example of my typical commuting ride.

I can't really speak to whether one or the other choice is empirically statistically safer. However, as a vehicular cyclist, I am most concerned about any time a motor vehicle and I are going to try and occupy the same space. Where the risk is highest in my experience is at intersections and driveways. At the same time road conditions and vehicle speed can make a huge difference in ability to avoid an accident. (I've never been hit by a car in over 70,000 miles of riding, but I have crashed because of road conditions, obstacles, or poor rider decision making many times.)

When choosing between routes, when all other factors are roughly equal (distance to destination, hills vs flat, etc), I prioritize, in order:

Note: I actually in many cases will actively avoid designated bike routes and in particular separated bike paths because they tend to be poorly maintained, or are populated with pedestrians, skaters, and wrong-way bike riders. On-street bike lanes, when striped, tend to be in the "door-zone", and are often not any safer, or less safe even, than riding in a wide shoulder.

For almost a decade before the COVID-19 pandemic, my primary commute was a roughly 12 mile ride from a suburb of Salt Lake City, UT, to the downtown area. In my case, I would almost exclusively ride toward work in the morning on the very straight, direct and primary "State Street". This is a 3 lane each direction with central turn lane major thoroughfare that sees a ton of traffic. But in it's favor, it has HUGE shoulders for almost its entire length. So, at 5:30-5:45 AM when I would begin my commute:

That situation is entirely different at 4:00 PM when it is time to head home. So my route out of the city was usually a combination of "Main Street" or "West Temple Street", which are the two secondary streets parallel to my inbound route. Each of these streets:

The drawbacks of my afternoon route were:

I would add to Gary.Ray's excellent answer the following thoughts:

I think this depends on a ton of factors.

Even if statistics would show that one type is safer than the other: I’m not sure it would apply to your individual case since a whole lot depends on the roads, time of day, day of the week, your own riding style, speed, how careful you are, how visible you are and so on.

For me personally the choice mostly depends on the length of the side road. Since changing to a side road requires you to slow down (and possibly wait at a traffic light or stop sign) it’s just not worth it for a short 200m section. This is also how some routing tools (e.g. brouter) handle it: The cost of tertiary roads is lower than that of bigger roads but taking turns also has a cost so it’s only worth it if the tertiary road is above a certain length.

Depending on the time of day, if there are traffic lights and traffic on the main road is slow, taking the side road could allow you to bypass the traffic so you are faster and safer.

I've found Strava's heatmaps near cities to show a lot of use on main roads. That's probably selection bias: commuters who log with Strava are pretty keen, and may want a direct route, while the road may get too busy during rush hour to be fast. At the same busy periods people may squeeze past on the quieter roads while trying to beat the traffic. At quieter periods speeds may get a lot higher on the main road.

Conversely there are roads that I avoid as much as possible on working days, because they stay fast but get a lot more traffic, especially heavy vehicles. I'd avoid them completely, except that a couple of them are the only realistic route to the only bridge crossing a river anywhere near where I want to be. I'll ride them much more willingly at weekends.

You may be going flat-out on aerobars training for a TT, when someone pulling out (or stepping out) in front of you is a real risk. Or you may be far more at risk from vehicles coming up behind and passing close, going slowly with a trailer. These of course are extreme examples.

Local driver culture is also a factor - that changes with the time of day/week, but also with the road. I've ridden recently through an area where the drivers are really bad for squeezing past on the main road, but courteous on the quiet roads leading to it (another unavoidable stretch of main road).

I suggest to concentrate on avoiding the car traffic, as collision with the car is about the most dangerous that may happen.

The only exception is if it is a pavement or marked by something like "no bicycles" or "pedestrian zone" - do not go there, of course.

Roads may have other problems, but if the one is closed for car traffic / very little used and another not, the only way how the car road could be possibly preferred is if it has clearly marked bicycle lane. Where I live, cars vs no cars most often mean also gravel or even forest road vs tarmac but be with it, I do not mind quality of the road that much.

This is, however, somewhat style-dependent. I only commute about 8 km one way so have plenty of time and can afford slow speeds no problem.

In addition to all of the nice answers, consider how many lanes of traffic you must cross. In the example map (which appears to be outside Anchorage, New Jersey, USA), I would travel on the main road (Ramshorn) when going north if that stretch was less than about a mile. This is because I'd need 2 left turns across oncoming traffic to enjoy the western side road.

When heading south, I would take the side roads (Frazee and River) unless I was in a low traffic hour or quite late for something. This is because right turns (where people drive on the right) usually cross no lanes of traffic and left turns on side roads are often quite safe.

user121330user121330
12111 bronze badge
New contributor
user121330 is a new contributor to this site. Take care in asking for clarification, commenting, and answering. Check out our Code of Conduct.
Add a comment  |
0

In my experience, maps alone are not enough to make a fully informed decision. Not much relevant information was really available in maps. Street view somewhat helped, but still, some streets where not covered or had been photographed at a time of day where conditions where vastly different from what I would find when riding them myself.

During my time in the city of Lima, Perú, I commuted and worked in parcel delivery by bike. The part of the city where I spent most time had a lot of parallel choices and after riding them, I constantly got surprised how much pleasant (or much worse) the next street may be.

If I could make a generalization (that still applies to that part of the city), main streets where useful when I wanted to get to destination as fast as possible and days where I wanted a good adrenaline dose, on the other hand, secondary streets where excellent for when I needed a more relaxing ride and where I was feeling tired or with less than optimal reflexes.

Main streets require but also allow for more acceleration if you go with the rest of traffic. People are accustomed to the fast pace and somewhat "respect" the pavement. But to ride in those conditions you must be a very "aggressive" rider and be prepared to react to many, many erratic behaviors from other road users (not only in the technicalities of ridership, but in your mood reaction and mental well being)

In that sense, streets tend to hace a slower pace, less traffic and less noise. For me, that meant a more relaxed ride, as I could rely a bit more in my ears to account for rear and side approaching dangers (On a quiet street you can easily hear the rolling tires of a car, a garage door opening, etc) and also you get a little more time to react to other people's movement, since there are not as many. (takes less effort for the brain to determine where everyone is going). Yet, it was not so wise to pedal too fast, since people there are not expecting anything to move faster than a certain speed so they move without worrying too much about their surroundings.

Finally, for training, none of those options where good. The best was to go to certain spots in the city where you can ride around a park or similar. These where loops in places where traffic was really low and it was possible to ride along an uninterrupted sidewalk or curb, so it was possible to pedal "flat out" with very low probability of someone stepping in front of me or driving into my path.

Not the answer you're looking for? Browse other questions tagged safety road bikeroutes maps or ask your own question.

17
Mapping the most gentle route for my single speed
0
Route mapping tool - INSERTING a point
2
Choosing a road pedal system - Focus on durability
9
Which mapping/route planning source should I trust for elevation?
6
Safety guidelines when using MTB clipless pedals on a road bike
8
Safety of taking a bicycle to a country where they drive on the other side of the road?