How can an inner tube literally *dissolve* itself inside a bicycle tire?

[Excuse my English. I’m German and don’t know all the specific technical terms.]

Today, I tried to inflate my tire, but while taking off the cap, the entire valve rotated with it, as if it wasn’t attached to the tube anymore. But there was still pressure in the tire. So I thought I’d take a look inside.

But the tire seemed glued to the rim. So strongly, that I felt like I almost had to damage the rim, just to get it off.

After opening it, I was horrified, and saw something I have never seen in my 30 years of bicycling: There was no tube anymore on the inside of that tire! It seemed like “tubeless“, and on the inside of the tire and on the rim was a thick, viscous slime, that may as well qualify as type of glue! On the bottom stood a kind of “water”, in a “puddle” of about 1/2 by 3 inches, that smelt of nothing to me, but according to a bicycle technician, smelt pretty badly. Where I had squeezed the tire, it stuck together as if that part was under a vacuum.

Mind you that this bicycle has never seen any “tubeless” liquids. A week ago, there still was a fully functioning tube inside there!

How, for all in the world, is something like that possible??

No bicycle technician that I asked had even seen something like this.

UPDATE: I managed to take pictures!
(adb + scrcpy, in case you wondered.)

Yes… what you see “is” a normal butyl rubber tube. At least what it turned into.

Important: The viscous substance seems to have further degraded, as it looks dryer now and there is more liquid at the bottom. (The brown area.) 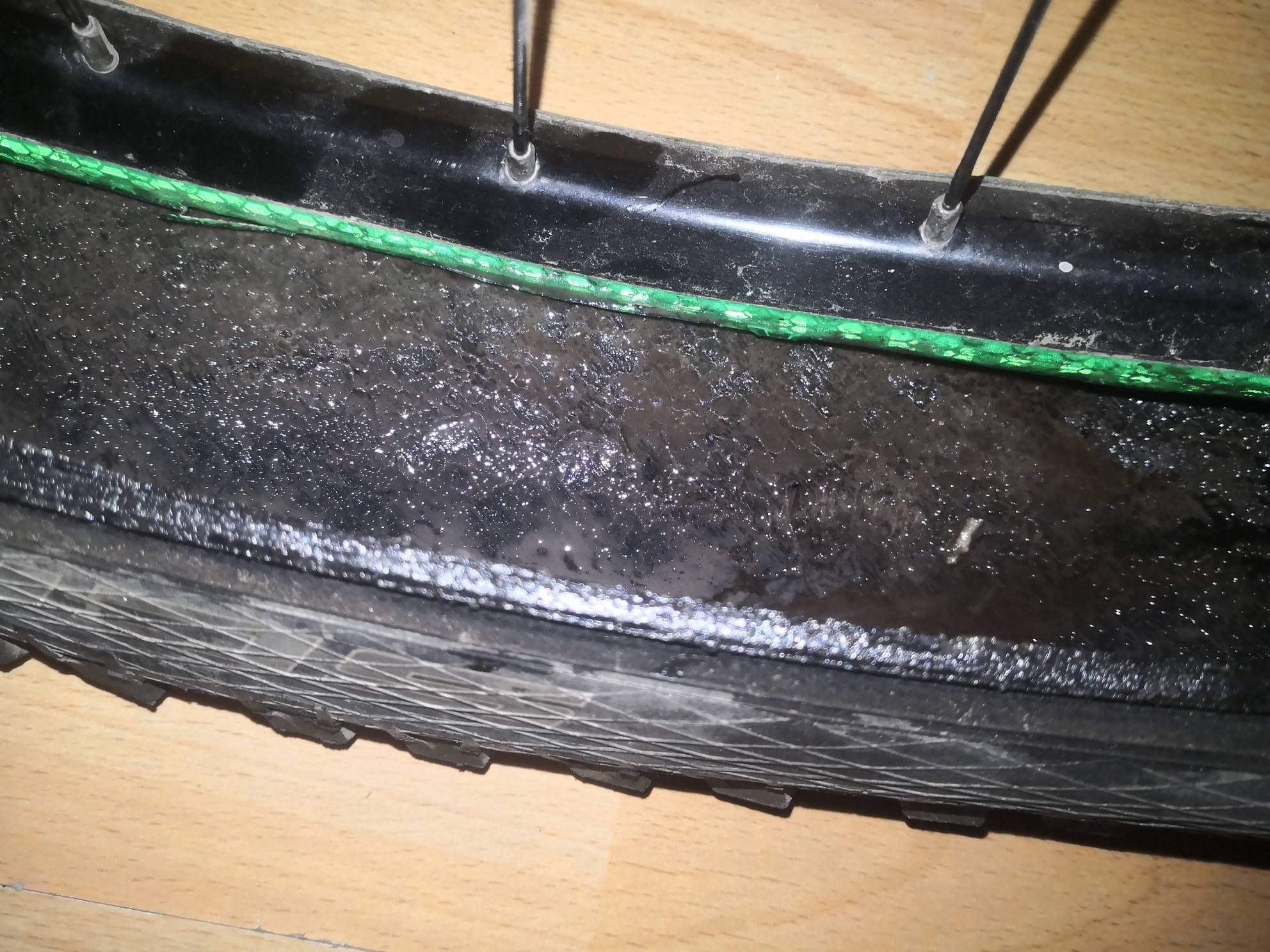 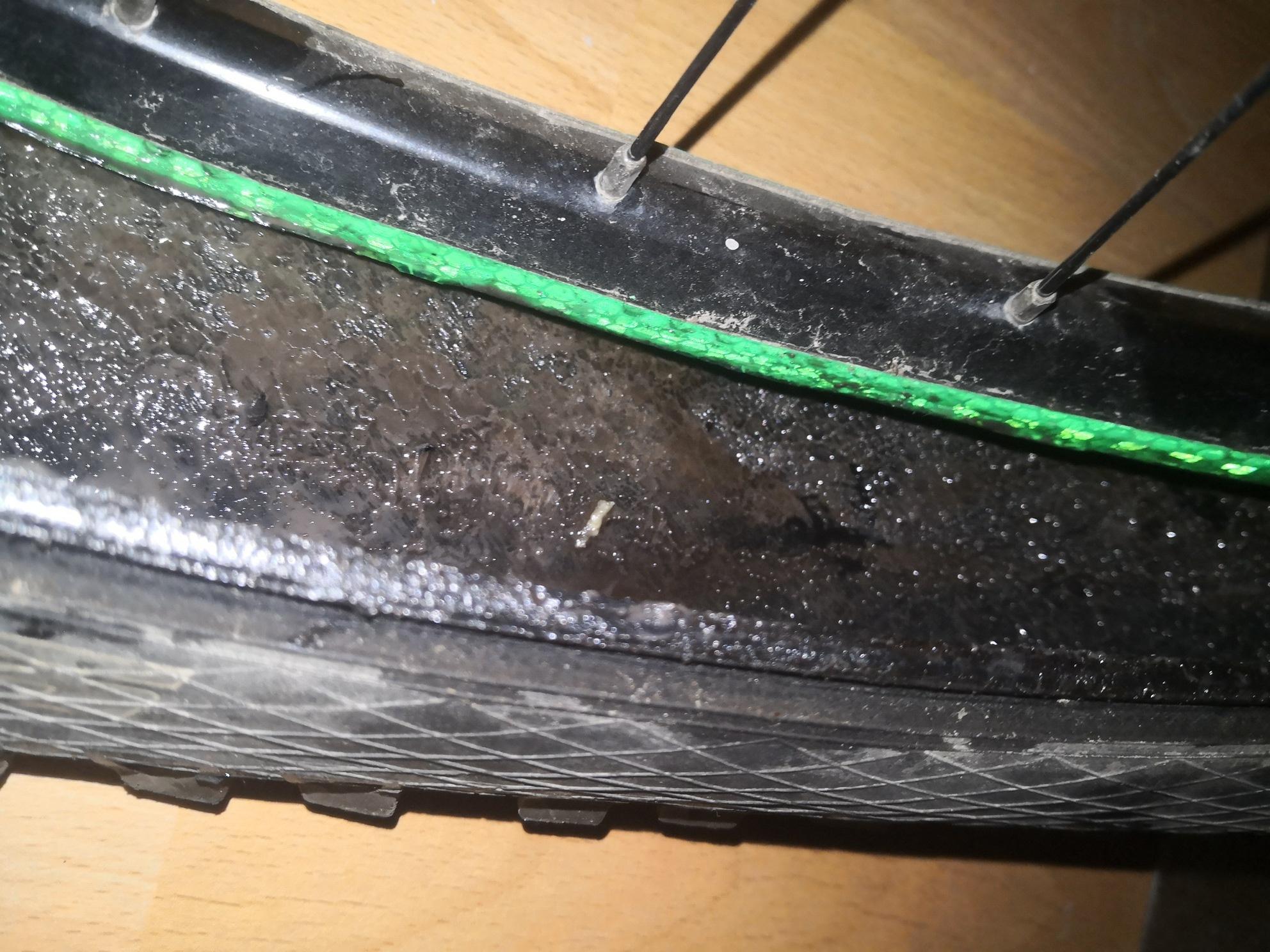 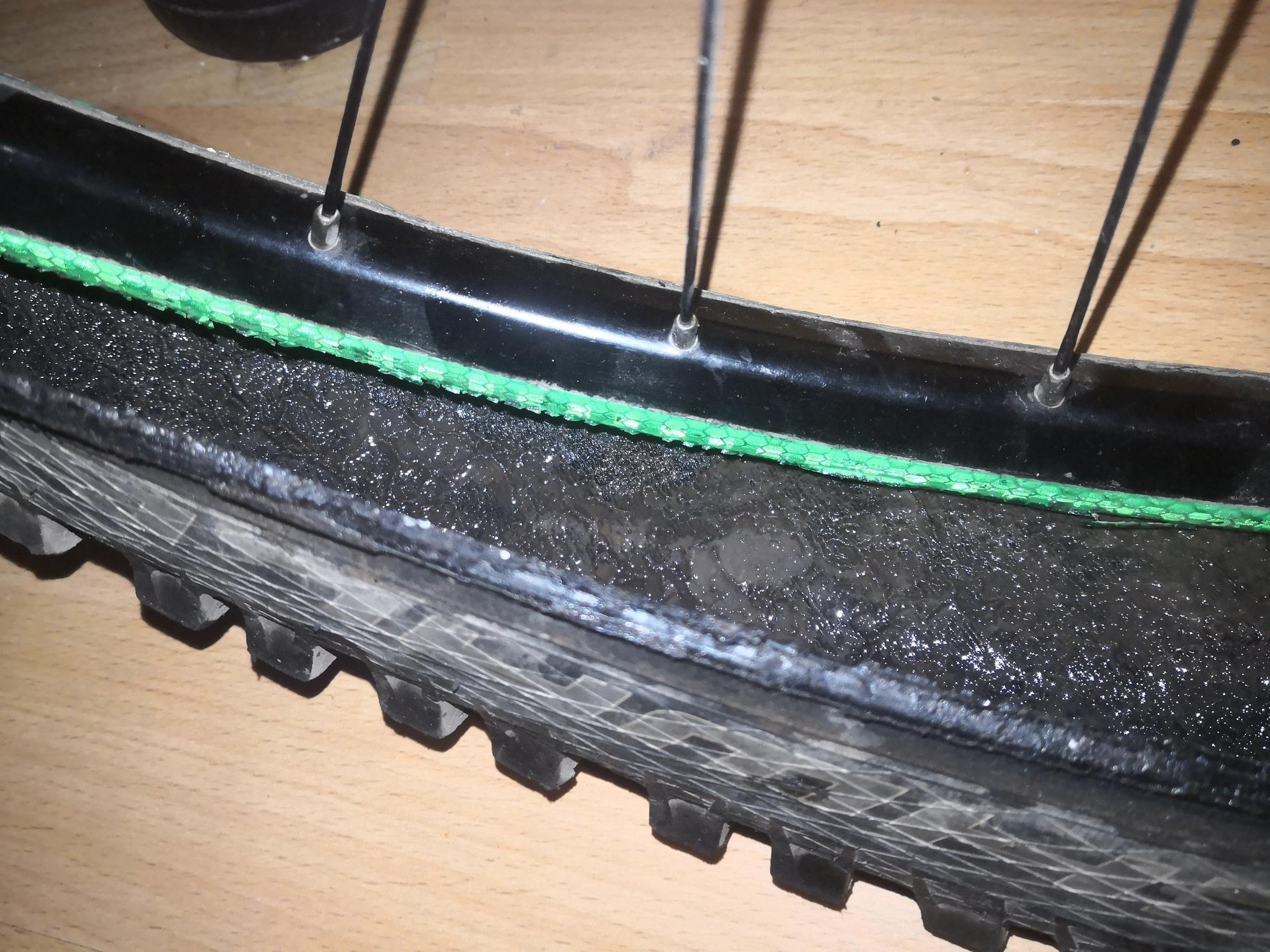 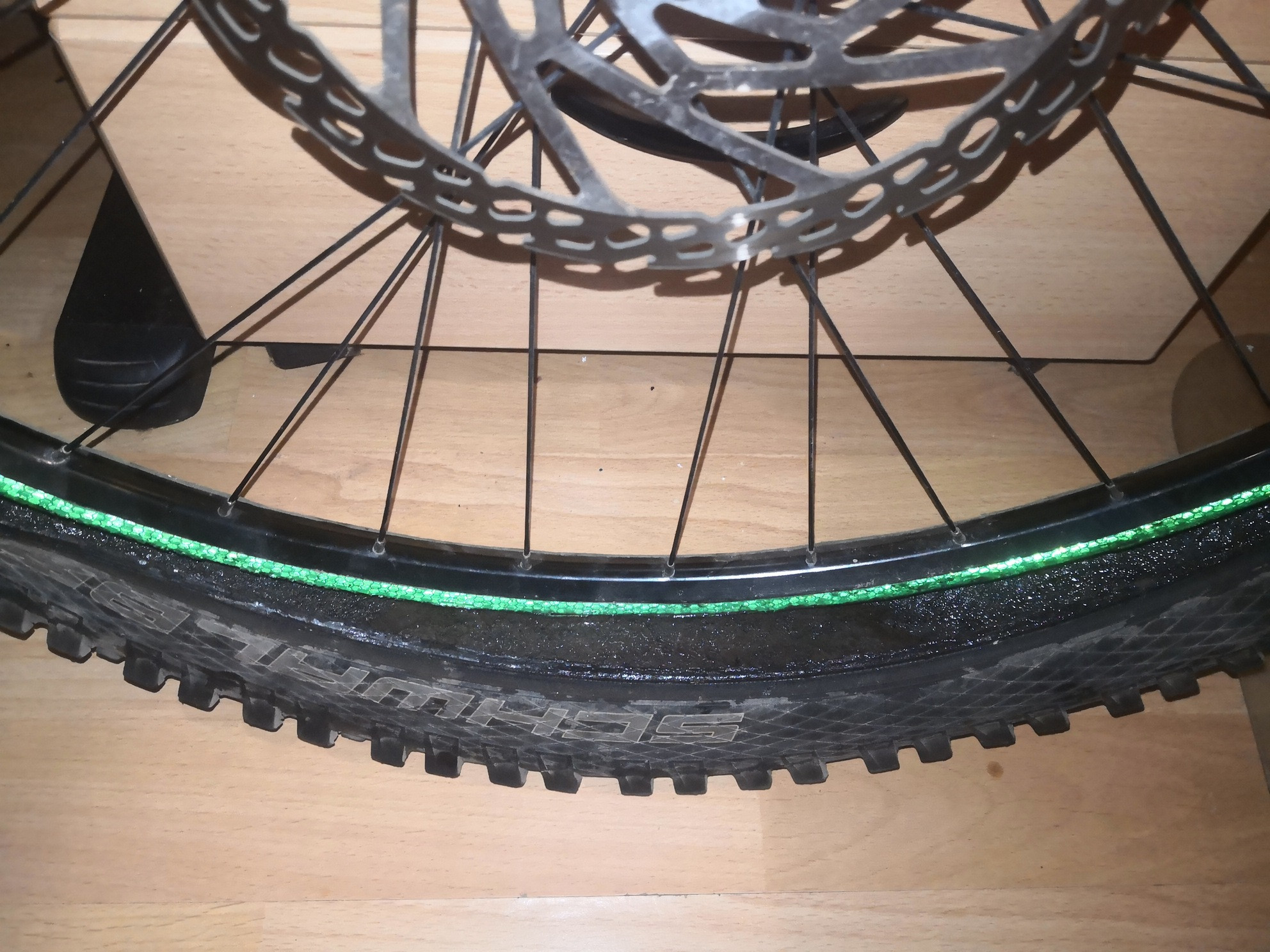 Details that may be useful

• The tire is pretty old, and almost a bit crumbly dry, but otherwise fine. Even now, it seems like the tire is re-usable. (After extreme cleaning measures, of course.)
• The tube was fixed by me, about 2 months ago. It got its third, and for me last patch, with a standard tube fixing kit that you get everywhere here, of the same brand I’ve been using for decades. (Containing a tiny tube of vulcanizer, a bit of sandpaper, a couple of patches, some tire levers, etc). I’ve done this many, many times before. It was quite hot on that day (30°C/86°F), and I rode my bike 13km/~8mi to the nearest lake right after. Up until 12 days ago, I used it several times, and everything was fine.
• Then, 12 days ago, I inflated the tire well, the last time, at a machine at a gas station around the corner. I rode 26km/16mi right after. At half the distance, I left my bike attached to a bridge railing in the evening sun for several hours. I rode home after, with no trouble. But I wasn’t really sure the tube was completely fixed and still as hard as it was at the start.
• Since then, the bike just hung on a “bicycle lift” under the roof / on the wall of my hallway.
• I haven’t put any strange chemicals onto or inside the tire or bike. Only a bit of grease for the axle (and only there), and last year I did clean the entire bike with a bicycle cleaning spray and hosed it off thoroughly afterwards.

• The bike has never been never close to any cars for longer than a few seconds (while riding on the road) for at least a few years.
• It could not have been standing in a spillage, as I assume then the outside of the tire would be affected, and it is still exactly as it was. (Even now, as I write this.)
• That bridge is in a zone where no cars are allowed and no cars can even get to, due to large boulders blocking the only way. It is going across a highway and mainly exists for wild animals to be able to pass that highway. But people and bicycle riders use it too. It’s a calm and safe place, away from any industry and partially a protected nature zone. So if anything happened there, somebody would have to specifically have injected it through the valve, in front of passing people. I think other explanations are more likely. :)
• The “transformation” might have been already started earlier than we think, but it definitely was still a normal tube and a normal tire when I put that patch on.
• All I keep thinking is “Was something wrong with the vulcanizer?” Because I now remember that the first time, the thin layer was “drying” so quickly in that hot sun, that the patch’s fringes didn’t even stick to the tube. I had to add a bit (a thin film) more ’round the edges, and press it on. I didn’t check it anymore after that, as the instructions said you could already inflate it right after, and I was in a hurry.

looks like it melted. do you live in a hot area? rubber can either melt or lose its elasticity and hardens and cracks. but this just looks like its melted. how long did it go with out being touched? did you use any preventative slimes or puncture protections. my bet is whatever was in it broke down over time and slowly eroded and melted through heat and moisture and tempeture changes.

It's old. Rubber melts. You should replace your rubber every few years, even if you don't ride it.

6
Flat tire: white liquid inside the tube
5
Is it normal to wear out the rear tire with in a few months when using a trainer?
1
How can I repair a swollen tire allowing visibility on the inner tube (picture provided)?
3
inner tube width range relative to tire width: reliability effects?
14
Why does my inner tube have brown liquid inside? Now with internal photo
5
Reinstalling tire after replacing inner tube, how important is it that tire bead is even along rim?
1
Uneven inner tube when inflated inside the tyre
2
How did my inner tube get folded in a Z inside the tire?
3
Problem with replacing inner tube of old bicycle with tire code: 47-559 (26 x 1.75)
0
Gluing rim—rim-strip—inner-tube—tire junctions