I fully disassembled, cleaned and regreased the bearings of my semi integrated headset. After reinstallation I was unable to adjust the "perfect" preload to eliminate all play and without having stiffness in the steering. Somehow there still is a tiny amount of play in the steering when checking really thoroughly with pulled front brake and moving the bike back and forth. When adjusting the preload this either results in steering stiffness or this tiny amount of play (no real rattling or knocking, more like some subtle play of the fork when paying close attention). The bearings didn't look damaged to me or anything like that. Is this subtle play acceptable/normal or should I investigate this further? Is it possible that some movement in the bearings themselves can transfer to the fork and create this slight noticable movement? I've added some pictures although I'm not sure if they're helpful. 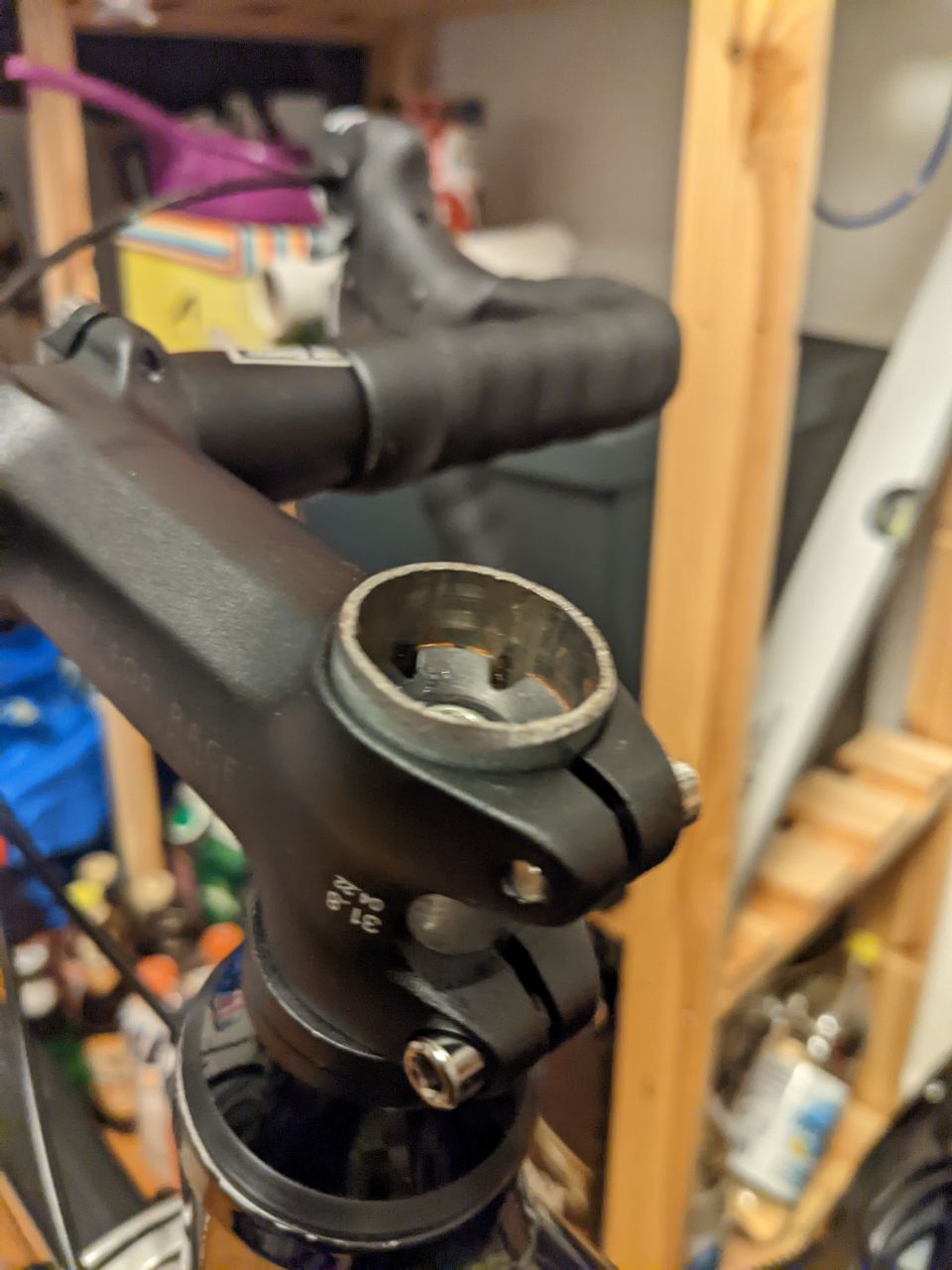 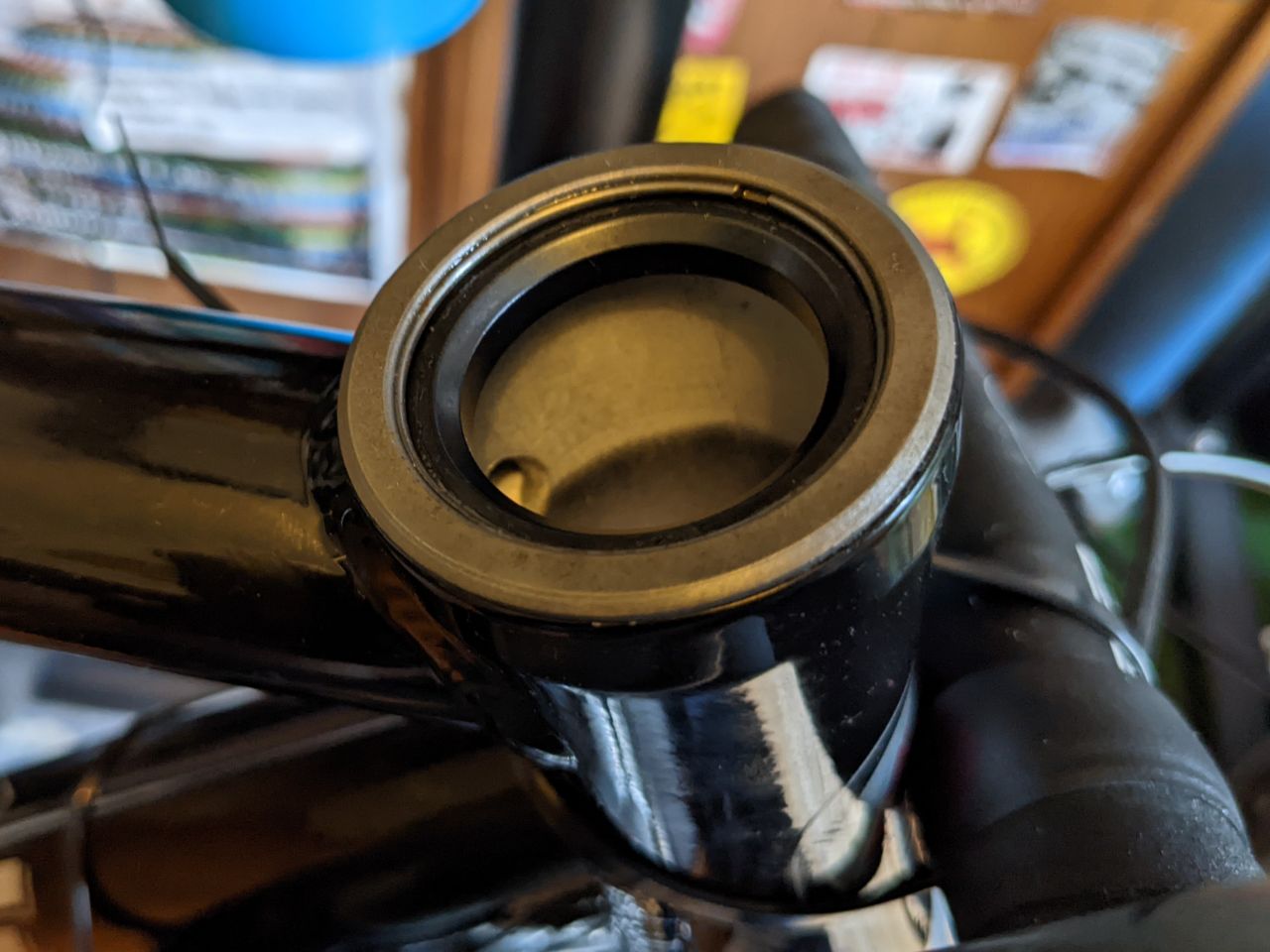 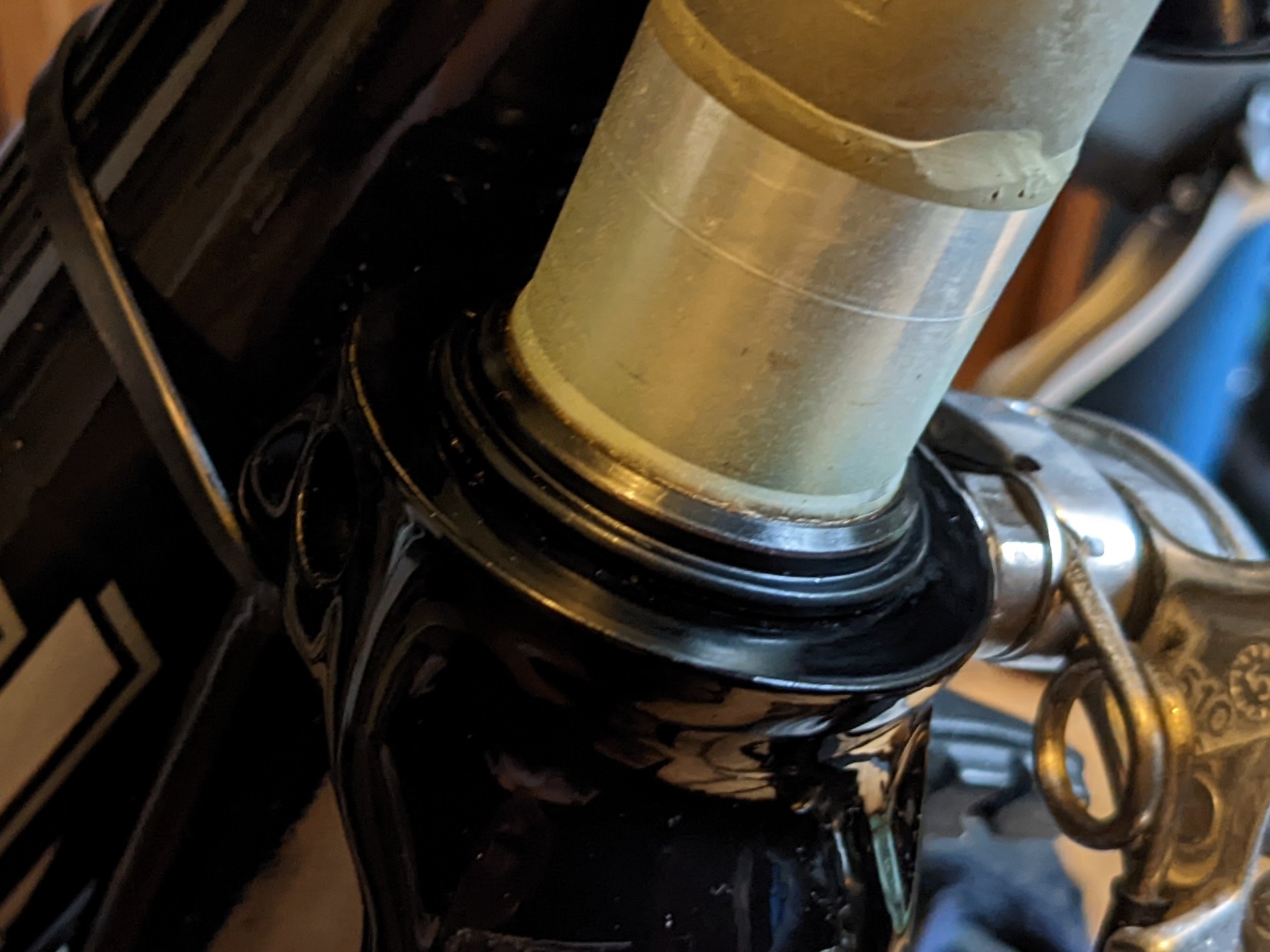 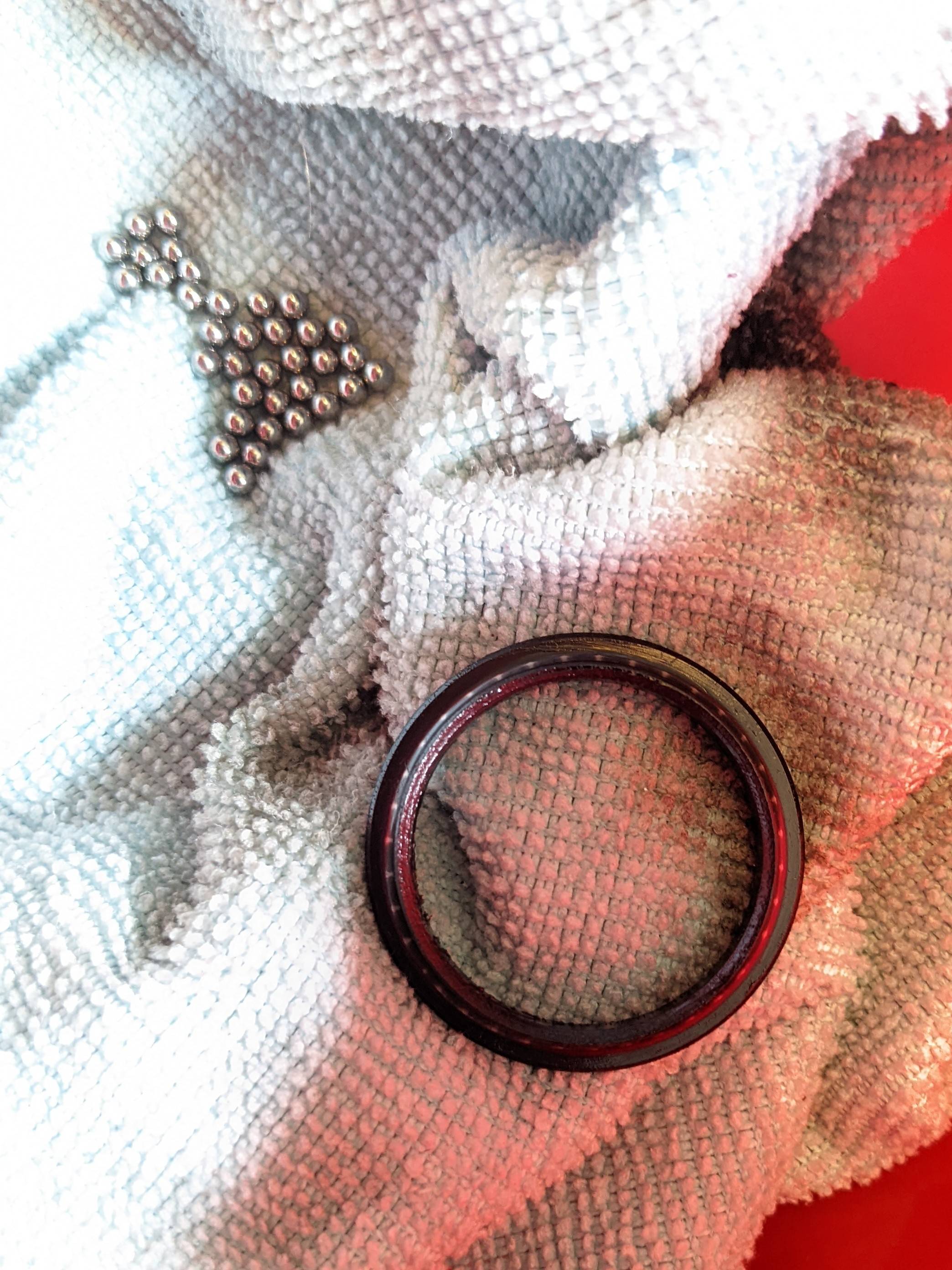 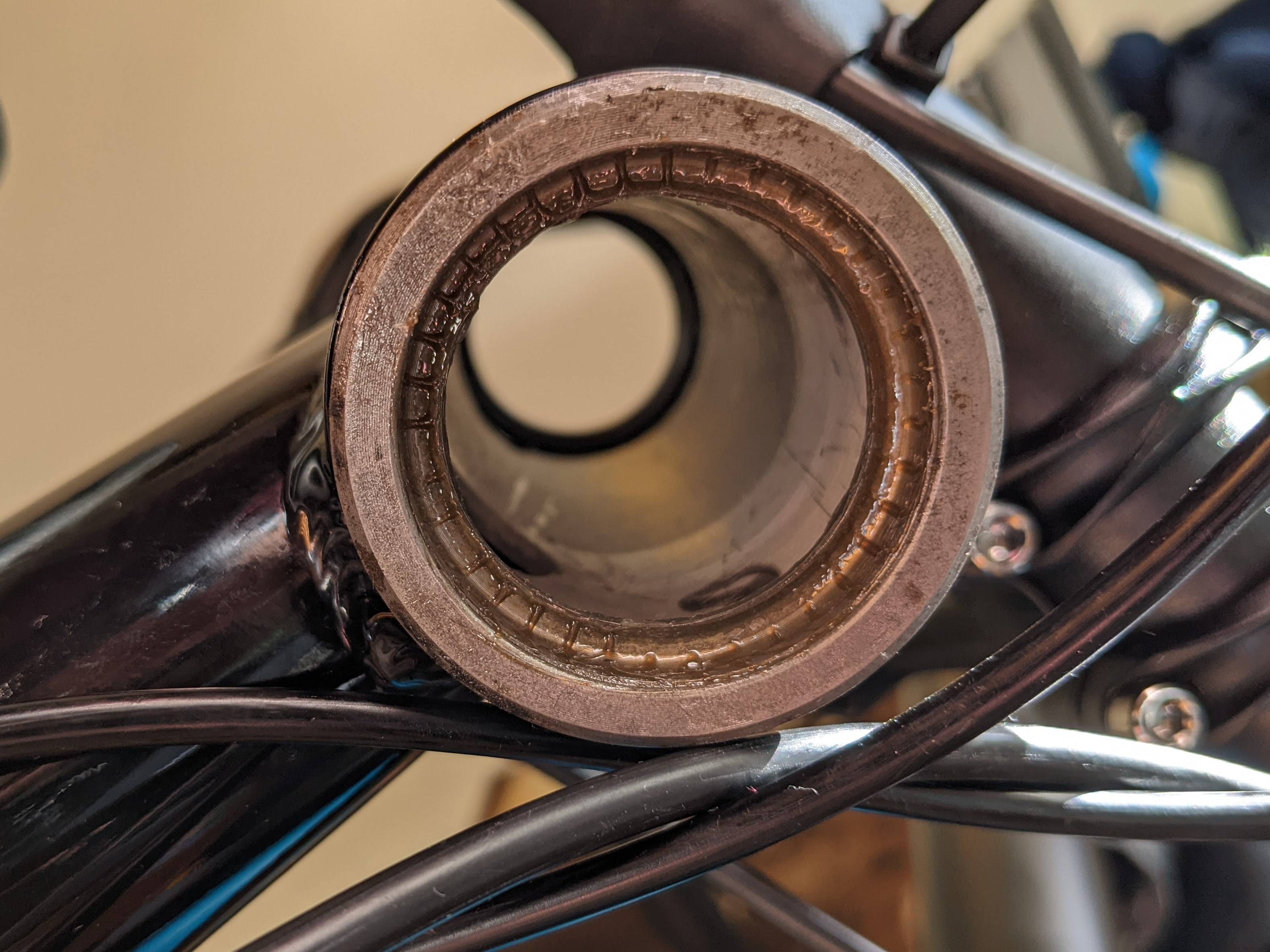 I think I've finally figured out why there was still slight play despite the top bolt being tightened. It looks as if only the two spacers below my stem slide over each other and have subtle play. Since the spacers are not tight around the tube, some lateral movement is probably noticeable. I assume that this is not an indication of a poorly adjusted headset? If I fully tighten the adjustment bolt, the play in the spacers also disappears. The real bearing play can be eliminated with significantly less torque. I uploaded a video that hopefully shows the phenomenon: https://www.veed.io/view/04f7c2d1-d2ca-4d23-9220-7069fdd15ada

It's unclear as written what you're doing with the front brake to test.

Pulling the front brake and rocking the bike back and fourth with both hands on the bars is an inadequate way of testing headset play on most bikes. Most brakes of all types have some amount of play in them. Almost all road caliper brakes, the exceptions being a very few with adjustable ball bearings themselves, need some amount of free play in the pivots, or else they bind.

What can work is pulling the front brake with one hand and rocking the bike back and fourth while the other hand feels for movement at the transition gap between the upper cup and the "beginning" of the headset, which might be difficult on this bike because in this case that's the soft-looking seal type part below the conical spacer.

Assuming a front hub that's free of lateral play, usually just turning the bars 90 degrees and rocking the bike that way is better than using the front brake, if one is going to do this kind of test. That way play in the brake is completely eliminated as a factor.

Other good tests are, with the wheel on, putting the bike in a stand and grasping the bar in one hand and one of the fork legs in the other and trying to get movement that way, or dropping the front end of the bike from a height of several inches to check for rattle.

If there is definitely play in the headset you can't solve without causing binding, check the cups and crown race are all pressed fully, i.e. no light gaps.

Headsets of this sort, which look a little like modern cartridge bearing headsets but aren't, are low-end parts and yours does appear to have some wear on it, so that could also be the entire problem. However, that wouldn't usually cause it to be either loose or binding, more like either loose or very slightly rough but still functional.

It's possible for bikes to have headset play that can't be eliminated without introducing binding due to poor prep on the headtube or the crown. Don't jump to that conclusion, but it is there once you've eliminated everything else. (Milling the crown of a bonded fork of any kind isn't really a thing, but you could get the frame reamed and faced).

I finally managed to adjust the headset properly. I think that in the beginning two things deceived me, so I couldn't exactly feel the play and eliminate it. During the test with the front brake pulled, some knocking noises were generated, which I misinterpreted as coming from the headset. Either they came from the brake, a brake cable or something else. Due to an incorrectly set play, the spacers under the stem moved and irritated me even more. I finally managed to set the preload correctly by carrying out the test for play with the handlebars turned 90 degrees and without applying the front brake. I only focused on the transition points between frame and fork as well as frame and stem. In addition I blocked the wheel against a wall so the bike in itself was stable. This way I could easily feel existing play in the headset. Another test I finally did to confirm was lifting the front wheel up so the bike was vertical in the air, holding the fork legs and rocking/moving them back and forth. This will clearly show if there is too much play and at the same time eliminate all disruptive factors such as the brakes. For me this test is much more effective than checking the bike at the ground where multiple things can mislead you.

14
How do I fix movement in headset
2
Can't adjust headset correctly
2
Do I need to remove & service integrated headset bearings when replacing fork?
3
Hole in fork crown welding seam
6
Play in headset with no upper bearings on a tandem bicycle
1
How to secure the fork when there is no stem
9
How can I remove very stuck headset spacers (alu/carbon)
4
Tiny amount of play on 1" threaded headset normal?
1
Play and stiffness in threaded headset