I just want to replace my good old 50€ used Peugeot City Bike, that has served me well for the past year, but has some problems (like ribbed Steel Rims) that are hard to overcome.

I want something that is very low maintenance, can be ridden in winter and in rain without needing much oil on the chain and brake maintenance. The brakes need to be very good, for fast but controlled city riding ...

I would include fenders, lightning, a luggage rack, the usual accessories. For shifting i am thinking about an internal hub.

I am still unsure which brakes i should choose. There are some low maintenance roller brakes, but how is their braking power? Should I keep using rim brakes despite their lower performance in winter? I guess disk brakes are not appropriate for low maintenance...

I am also not sure about staying with the good old chain (encased, so it is protected from dirt) or if i should switch to belt drive. Is the belt drive really worth the extra money, or is it just a marketing fad?

My Peugeot had drop bars, but I guess I will drop them for standard city bike bars.

So question is: What should a bike that is to be bought for shopping and riding in the city consist of? Anything I have forgotten or not considered?

I would try to avoid rim brakes for a low-maintenance commuter bike, because they're not low maintenance. And they don't work very well in the rain. They're also not much cheaper than cheap disk brakes. It's not worth the price difference.

In my experience the roller brakes are less effective than disks or drums. The roller brakes don't bite, they're very gradual, and require a lot of force on the lever to lock a wheel. Which sounds desirable, but it means they work quite differently to other brakes. I found that when I had a cheap cable disk on the front and the roller on the back I tended to treat the roller brake as broken, since it didn't seem to work at all with normal braking force. They also need non-obvious maintenance, meaning that when something eventually went wrong I had to take them to the bike shop and wait for the one guy who knew about them to deal with the problem (worn pads).

Definitely look at hub gears - the reason your generic "European bike with gears" has hub gears is that they're low maintenance and very tolerant of abuse or neglect. The modern hubs mostly work very well (search this site for copious discussions). It's also much easier to build a fully enclosed chain with a hub gear setup. Which matters a lot in snowy weather. In the other Austr-something-a we get kangaroos and Shimano 8 or 11 speed hubs in a range of city bikes (Gazelle at the high end), and at the bottom end various 3 speed hubs. The three speed ones eventually need a new gear cable every 10 years or so, the 8 and 11 speed ones need cable adjustment and new cables more often. The Rohloff end need new oil every 5000km (no, really, it says so in the manual).

It may also be worth looking at a hub dynamo setup. Yes, you pay quite a lot for the privilege of not changing the batteries in your cheap LED lights. But, you never have to worry about changing the batteries in your cheap LED lights. In practice I use both - LED blinkies on the handlebar, helmet and underseat, dyno lights above the front and rear wheels. But I never turn the dyno lights off (there's no real drag when riding), and I sometimes forget the blinkies.

Luggage carrying is a balance between weight and bulk, and how much you carry. If you can reduce your load to what will fit on a rack-top bag you only need a lightweight rack and don't have much air resistance (plus the load is centred on the bike). If you want to carry more you could use a basket, but for more people the question becomes: one pannier or two? One is lighter, cheaper, carries a bit less, but is off centre. With two you can balance the weight but you have more carrying capacity so you end up carrying more stuff.

It's worth buying expensive, waterproof panniers. Ortleib panniers. There are other, inferior brands, but unless it's an Ortleib or looks very much like one, I wouldn't buy it (just for the record, I'm a customer and don't benefit from any sales). After a couple of years an Ortleib will no longer be airtight, and after 10 it will probably leak a bit. My commuting panniers have quite a few holes at the bottom (but not at the top), and whatever is in the bottom gets wet when it rains. But they're (ahem) 20 years old. My good touring panniers (home-made Ortleib style) are 10 years old and don't leak... but they're huge and I don't use them as often.

Look at the new Venture series from Scott. Designed as the ultimate touring hybrid, they are fast, agile, low maintenance, and strong. They are more aggressively positioned than most hybrids, but not as aggressive as a hard tail mountain bike or a road bike would be. It's a bike that was designed around the messenger concept. If you need to be on a bike which is fun to ride, but stable and comfortable all day, then there are much worse choices.

The link is to the new Venture 10, which is pictured below, but there are several levels of components and prices. The bike comes as pictured, with racks, fenders, and lights. 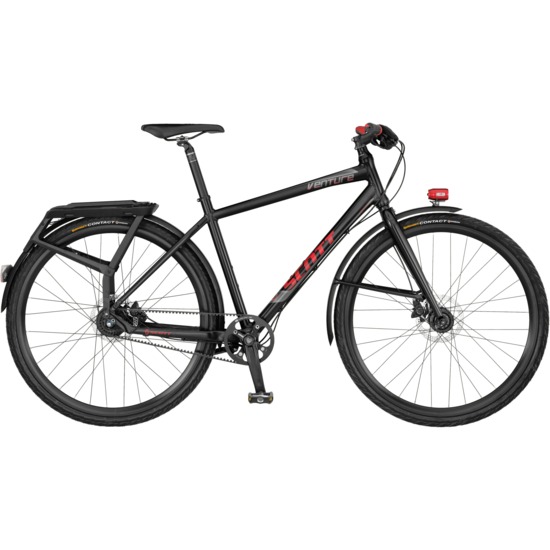 I've partially reposted my answer from here, because it also fits this question well.

I now have gone with this Bike: http://www.simpel-ch.de/velos/ww/nuvinci_360/herrenvelo2012.html 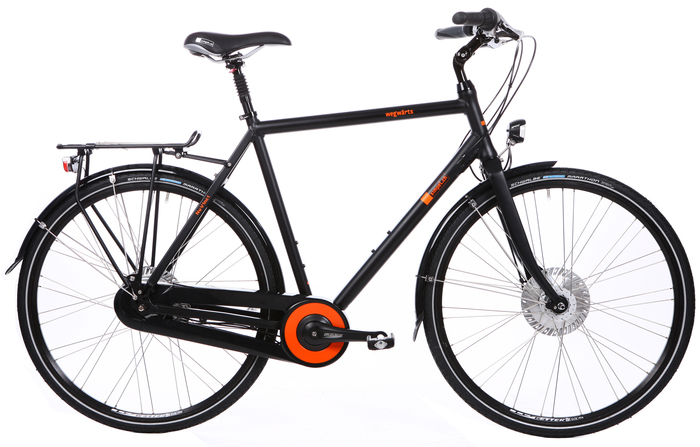 I have this bike for a year now and I am pretty happy with it. It does not allow very sportive riding, but it is nearly maintenance-less, since the chain is fully enclosed by the protector (which rattles sometimes). The rear rack allows mounting a Basket. I check the chain every 3 Months, and there are still no signs of rust or that the original oiling has diminished.

The transmission is very good for city riding and pulling a trailer up a hill, but not so good for going fast on roads (35 - 40 kph max possible if you have to pedal).

The brakes are also very good, the only maintainence required is filling them with some special oil, and they have no problem braking the bike going down a steep hill with a fully loaded trailer.

The bike has built in lightning that is very bright, with a hub dynamo.

This is a photo of my bike in action, with full loading capacity of about 60 kg (30 kg on the trailer, 30 kg on the rack). Total cost of the Bike, as you see it here (with trailer and baskets and airzound) was 1500 €, Maintenance cost is around 30 € per year. 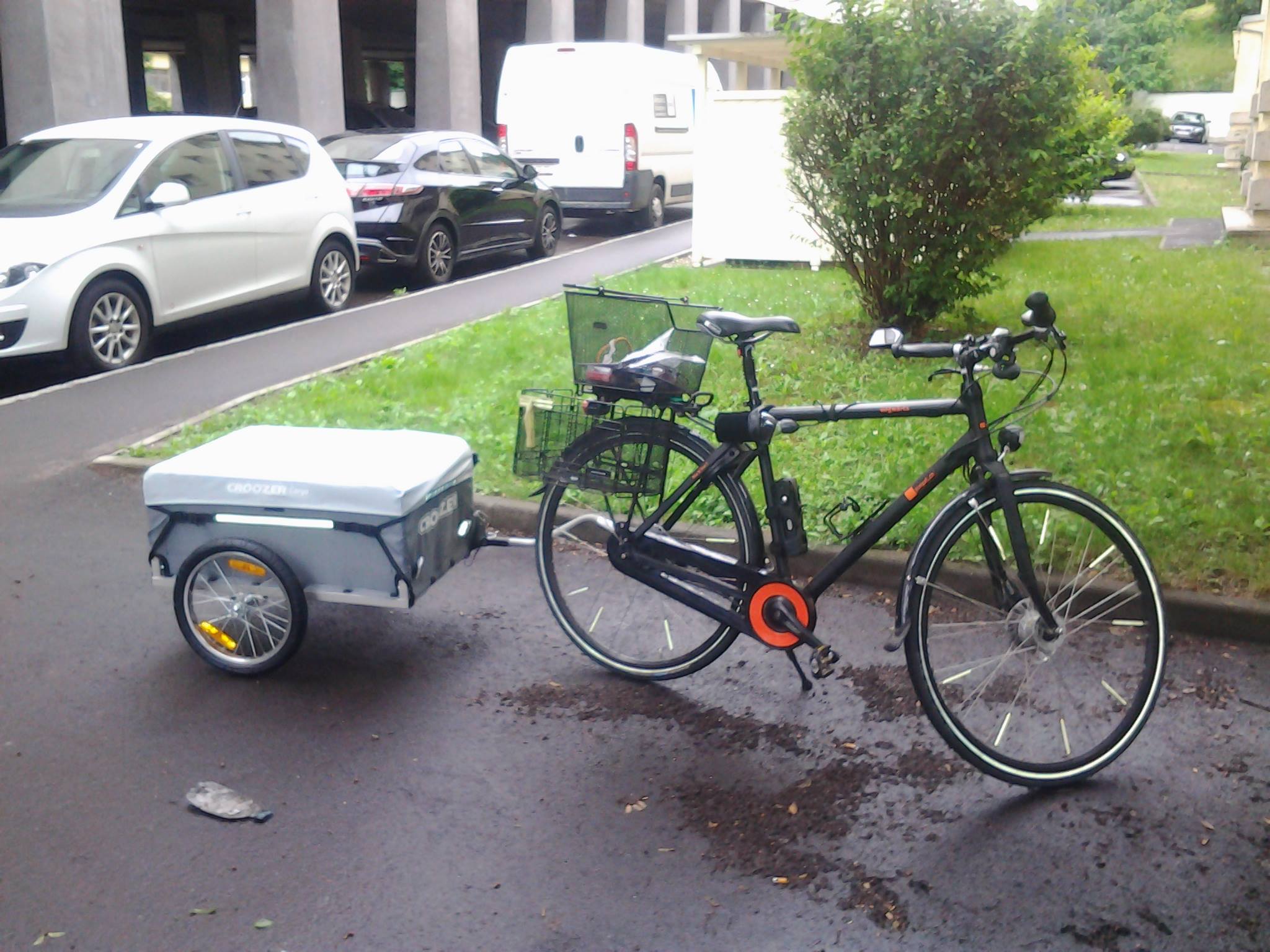 I'm not really sure what you mean by low maintenance, but if a bike is going to get even mildly dirty then not cleaning it will increase the wear and reduce it's life significantly. Furthermore, all bikes benefit from oiling and it doesn't take long; although to be honest I don't know if there are bikes available that are low maintenance in terms of not needing to oil them as much.

I'd recommend some along the lines of the bike posted by zenbike. I will add this though: having less gears may be harder work (perhaps no difference in the city though), disc brakes offer superior braking power to v-brakes but they do need more maintenance, especially if hydraulic.

Not the answer you're looking for? Browse other questions tagged brakes shifter shopping city or ask your own question.

13
What type of bicycle would be the most suitable for riding in winter in the city?
10
Riding a Mountain Bike in the city
3
Suggestions on buying a road bike for the city
3
Looking for components needed to route 3 cables on top of toptube for cyclocross bike
5
What happens when a bike has not had maintenance for a long time?
5
What is the safest type of pedal for all-weather city cycling?
1
Should I buy a mountain bike, what size should it be?