Buses in my city have bike racks. In some cases, it is faster to use both the bus and your bike to get from point A to point B (the transit system here isn't too good). Google Maps is great for finding transit directions, or bike directions, but as far as I know, I cannot easily find directions that make use of both... Are there any tools/websites that would help me finding such information?

OpenTripPlanner will do this, but isn't everywhere yet. There are deployments for New York City, Portland, OR, and a few other cities.

The short answer: No. Google Maps will, when you're in "transit" mode, tell you to walk to the train station/bus stop, but bike/transit trips seems to be beyond it for now. There are no other directions systems I'm aware of that will do this. 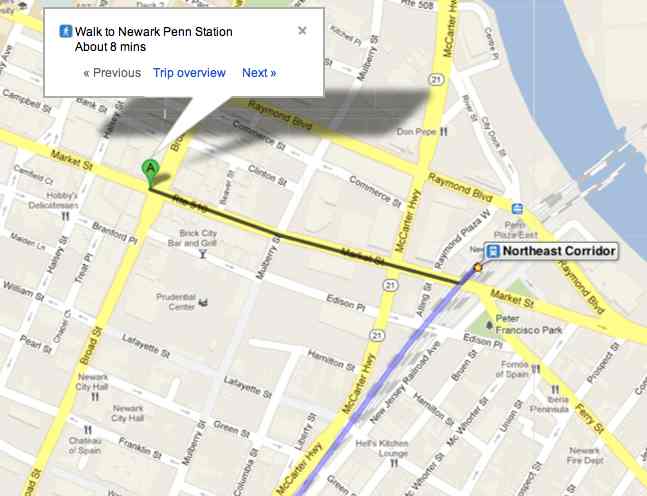 In the above picture, you'll see that Newark Penn Station has a star on it. That's because I have it bookmarked in Google Maps. Click on any destination or building or landmark on the map, and you can do this. It'll then show up on the map as a star, for easier mapping.

Not the answer you're looking for? Browse other questions tagged bikeroutes software or ask your own question.

9
Where can I look up voting guide for better bike infrastructure?
5
What map / navigation / bike direction apps are available for the iphone for commuting / urban cycling
2
Multiple Bluetooth Smart sensors for bike?
1
Tips for first time cyclist on 9W in NJ/NY
3
Finding better routes than bicycle apps suggest
3
Are there any online bike route planning options that allow 5-10 mile incriments?