What are the signs and symptoms of a bent mtb frame? Or bent forks? What does it feel like when riding it?

Don’t count on any warning signs.

A few possible signs of impending frame/fork failure or a bent frame which are all pretty non-specific:

It’s a good idea to look over your frame and fork occasionally and check for any cracks or bends.

We can infer from Jobst Brandt's article that the bicycle will not track straight and will always veer off to one side if ridden no-hands if frame or fork are out of alignmnt.

His repair suggestions are for steel bikes and shouldn't be attempted on alu, carbon or titanium.

FRAME I broke a bike (several bikes) at the seatpost junction. 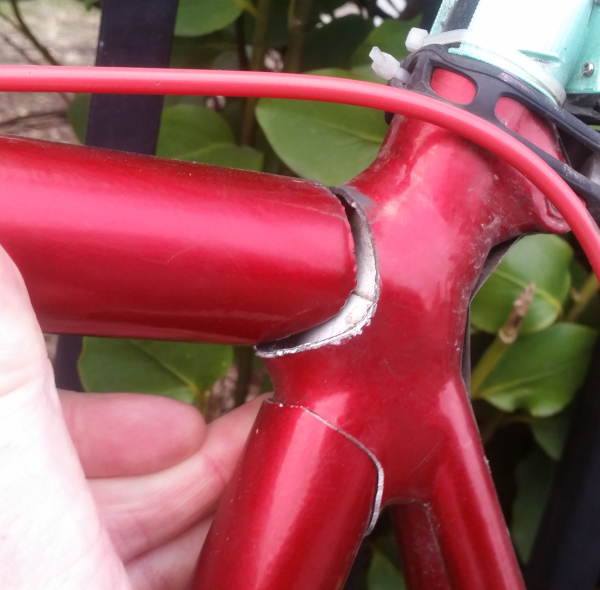 This started as an odd-noise - an occasional tappy sound, and a general lack of speed where everything felt sluggish, like there was brake drag. Then I felt a clonk and the bike settled - I thought the seatpost was slipping down. This resulted in a long walk to work.

FORKS I had an 80s road bike which turned out to have bent forks. It wasn't visible unless you laid the fork crown flat and the measured the height of the dropouts from a flat reference surface. The rim brakes were about centered when assembled.

The symptom was if the bike ever hit a bump like a stone, stick, crack or crossing a ramp then the bike felt like it had "stepped to the right" If it was a MTB you'd wonder if the front had slipped off a rock, requiring some effort to hold your balance. Not ideal if pedalling at full road speed, and I got that thing up into the 40 km/h range.

I did repeated checks looking for cracks and other issues like this, but the only way it was diagnosed was that one dry day I rode through a shallow puddle then onto dry road. I glanced back (perhaps I was about to turn across traffic?) and noticed that the bike was leaving two distinct wheel tracks of water on the dry road.

Upshot was that under a sudden load, the fork acted like a spring, loading up one side and throwing the front of the bike to the right.

You can just make out that the for tines are bent back (relative to the headtube) in this photo, and that the wheel is turned slightly less than the fork tines/legs. 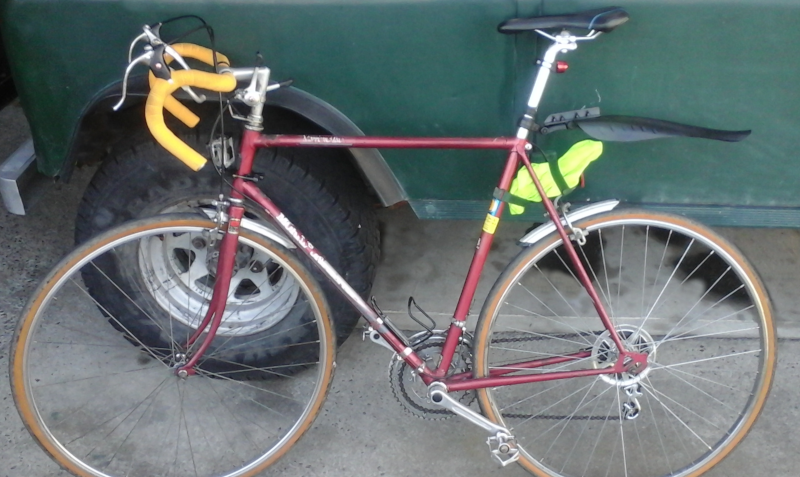 Also notice the rust on the top tube and down tube, around 2 inches/50mm aft of the head tube. This is characteristic of a frontal impact that has tweaked both tubes and allowed moisture to the steel underneath.

Here's another bike with a frontal impact. This one was straight, but pushed back.

This one rode correctly, but it actively wanted to turn to either side. So it required the rider to keep both arms in tension, holding the wheel in the middle. None of this casual self-centering or hands-free riding. If you let go, it would throw you at any speed. 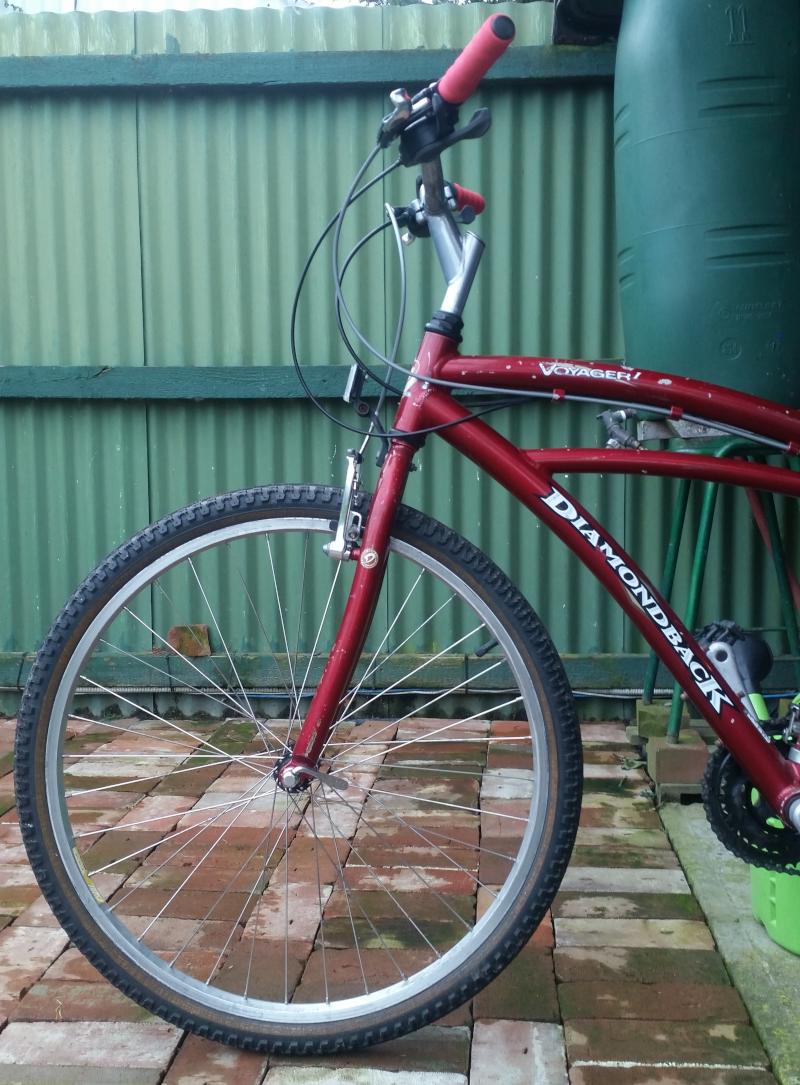 SEATPOSTS This happened at least three times, always due to a hard landing and far too much seatpost stickout. It feels like the saddle clamp has failed and the saddle has rotated so the nose is upward.

MEASURING Bicycle frames are symmetrical. So you can use a string pulled taught from one rear dropout, up and around the head tube, and back down to the other rear dropout. As long as the string isn't fouling cables or chain, then the horizontal gap to the frame should be the same on both sides of the bike, within a millimetre is fine.

Suspension can also throw off this measurement, if the bushings, bearings, pivots are worn/sloppy. Any joint should have rotational movement, but not sideways movement. Is it possible you're feeling slop in suspension?

The front tire is very close to the down tube, or may even touch it periodically.

This happened to me long tone ago after the hard forward hit. The workshop said that frame is not safe to ride and not repairable.

5
What does a good weld look like
1
May I ignore the frame damage (or should I get a budget carbon frame)
1
What is the frame called that fits 700c wheels?
3
Seatpost Overextension
2
Does a high MTB seat post risk frame breaking
0
How should a good CX riding position "feel" (alternative to highly scientific measurements...)
5
Dent in titanium MTB frame, is the frame OK to ride?
3
How do I know if a given hardtail mtb frame is 'supposed' to have suspension forks?
3
Replacing frame on mountainbike
2
What are the times and costs involved in assembling a rideable bicycle from a salvaged frame?