I've got a geared bike back tyre that has a dent in the rim. I'm considering a fixed gear conversion. A few points of issue:

The skewer width on the current back tyre width is for a 7-speed block.

What are my options to deal with these issues?

No EBB, vertical dropouts, and 130mm spacing in the rear. You have a few options. Here they are, from worst to best, and most likely cheapest to most expensive.

My recommendation is the ENO, hands down. Don't bother with your current rear wheel. It's more trouble than it's worth.

I think this conversion depends on where you live. Currently, a lot of niche market factories are producing small parts specifically engineered for fixed gear conversions.

I can see the value of the ghost chainring, but I think it's dangerous, and the ring would be dancing up and down all the time while you accelerate/deccelerate via the pedals, and bob violently on fast downhill, when it is very hard to catch up with the pedals, and when it's most dangerous if you have any surprise.

The magic gear has its value, and would give a very very nice setup: easy wheel assembly and reassembly, use a regular skewer (no bulky 15mm spanner to bring along), BUT I think it would last only for a few miles. Slack develops very fast, and you couldn't adjust it with the same chain (but honestly, I'm talking from theory, never used that either).

But I think the solutions that would give you more satisfaction are those that allow you to solidly compensate for chainslack, and most of them were already mentioned:

That third option would be a metal pulley held in place below the chainstay by some solid structure rigidly attached (welded, clamped) to the chainstay, with some kind of adjustment (a slot would be perfect). It would be necessary to attach it so solidly because, when deccelerating or skidding, the chain would compress this pulley against the chainstay with what might be a hard force. Some frames might not be good candidates for doing this.

Anything you chose, keep in mind that:

You can purchase a new skewer or add a ton of washers. There are eccentric bottom brackets you can use to provide chain tension in the absence of a horizontal dropouts. 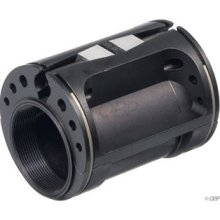 The big hole (notice it is not in the center of the cartridge) accepts the cranks. Depending on the adjustable orientation of the hole you gain or loose a couple inches to the front/back up/down. These small adjustments will tension the chain.

Due to the following reasons, I can't recommend converting this bike to a fixed gear:
a) Vertical Dropouts (making chain tension adjustment difficult)
b) Dented wheel (Probably don't want to rely on this, it could fail more easily or cause the tire bead to pop out when skidding)
c) Existing wheel has a freewheel, and is not going to accept a fixed cog. (You need a new wheel to accept a fixed cog and lock ring)

You'll spend way more money getting this bike converted to a fixed gear than it's worth.
Really, it's probably easiest to either a) purchase a new or used fixed gear bike or b) buy another bike with semi-horizontal or track dropouts and get a new rear wheel with a flip flop hub, fixed cog, and lock-ring.

Otherwise, the cheapest solution to having a working bike is probably to just buy a new geared wheel and put it on your bike and leave it as a geared setup.

Not the answer you're looking for? Browse other questions tagged fixed-gear conversion or ask your own question.