How do I calculate spoke length?

I have lots of bikes and lots of interesting wheel sizes, I would like to know how to calculate the right spoke lengths for a wheel.

I appreciate that there are probably rather a lot of variables but this is something that has been an issue for me from time to time so being able to work out the right spoke length for an arbitrary wheel (did I mention that I have half a dozen or more different wheel sizes in the garage?) would be useful.

To be clear - I don't want a calculator, I want to know what the sums are.

The basic arrangement for cross-laced spokes is thus:

For radial (straight) spokes, the formula is simpler:

I'll credit this page for the formula; it also has more detail.

There are also a bunch of calculators online, the easiest of which is probably Damon Rinard's spocalc spreadsheet. Other calculators:

As usual, Sheldon Brown has a great page on wheel building and you can learn more about the math from the above mentioned book.

If you're still interested, you can check out the site I'm developing that draws the wheel for you, allows you to play with all the variables and select different lacing patterns. It may help to visualize what you want before you build it (and even see it spinning). 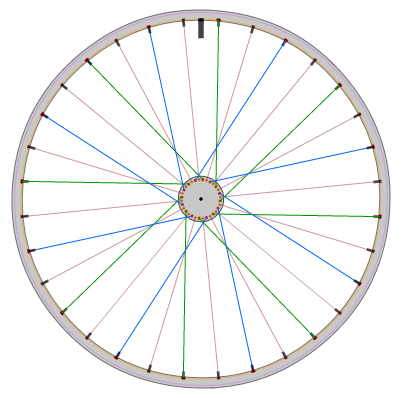 Note: It's still in active development, so don't expect perfection.

The wheel illustration above would appear to be a non-drive side radial lace and a drive side 3cross rear wheel. I've used this combo with a full radial laced front on a 24" BMX Cruiser I built in the late 90's. I referred to the rim manufactures data base through a distributer and found their recommendation to be spot on. I have found some spoke lengths can be hard to find. A Phil Wood Spoke Cutter/Threader is a vital tool to have access to in situations like that.

Not the answer you're looking for? Browse other questions tagged wheels spokes math or ask your own question.

1
Help on calculating spoke length
-1
Spoke length with NOVATEC GOLD PISTA hubs and H PLUS SON SL42 rims
9
How to build a wheel
4
Wheel building for n360 + disc brakes on H Plus Son 700c, 36h
0
Help determining spoke length along with an education

4
How to calculate bike stand-over height using frameset geometry and wheel radius?
8
What tools are required to replace a spoke?
2
Selecting spoke lengths
4
Rim dish and flange angle problem
3
Spoke Length +- 1mm
19
How precise do spoke sizes need to be?
0
What is the recommended tension for my AlexRims X2100 rim?
1
Rear wheel power spoke pattern
0
Help determining spoke length along with an education