Does anyone have any evidence that uglyfying does or does not work as a theft deterrent? It doesn't have to be scientific: even anecdotal evidence helps (and maybe well-founded opinions)?

This question was originally part of this one but I was asked to separate it.

It is effective against certain kinds of bike theft, particularly if you already lock up your bike effectively every single time (which is a good assumption if you're willing to go through the trouble to uglify it). Many people swear by it. For example, LDS missionaries in Taiwan repaint their new bikes poorly as a matter of tradition.

To the first and second kind of thief, appearance is only a minor concern. To the third appearance is a major concern. The amount of each type of thief really depends on the area. In some areas very few are joyriders, whereas, in other areas mentioned in the report, up to 80% of the reported stolen bikes were abandoned and later recovered. Your risk for each type of thief also depends on where, when, and how you lock up your bike.

As these interviews with bike thieves point out, most bike theft of the first two kinds happens primarily because the bike is inadequately locked, not because of appearance, although appearance may deter these thieves regardless. Thieves often sell stolen bikes for dirt cheap, down to $100 or less, so to them it doesn't matter much if it looks like a beater bike or a racing bike. For example, my brother had his $80 old Walmart bike stolen when he left it in an apartment bike rack overnight with just a cable lock. The interviews even mention that bikes over $1000 are sometimes too risky for low-level thieves to steal.
All of this may explain why this study found that cheap bikes, including used cheap bikes, are among the most frequently stolen (see the picture below). The study also found that used bikes under $150 dollars are stolen many times more frequently than new bikes in the same price range. However, this raw data has some complexities, like how cheap old bikes are several times more popular than new, expensive ones and how expensive-bike-owners are usually more thorough in their locking practices. 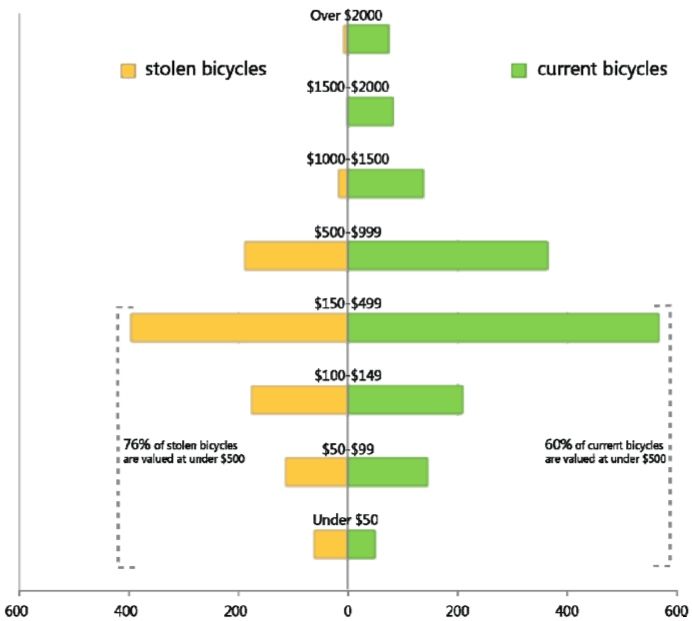 That being said, there is a difference between making a bike look worthless and making a bike look repulsive. Stickers and rust are repulsive, while a bad paint job and a milk crate on back are just cheap. Making your bike look unsellable at any price should be your goal, not to make it look like a cheap beater.

Somewhere like New York with more of the third kind of thefts, planned thefts by seasoned thieves, is going to be an area where appearance matters far more and how you lock it matters much less. The interviews with thieves that I mentioned earlier shows how professional thieves will be ordered to steal an expensive bike or a certain brand of bike, or will see one and case it, coming back at an opportune moment with power tools or whatever it takes. Against these kinds of theft, changing appearance is one of the only methods of prevention.

I would guess that hard evidence is going to be difficult to come by -- doing anything resembling a controlled experiment would be enormously expensive, and cyclists are too disorganized (by this I mean lacking unified organizational structure) to do some sort of sampling-based measurement or epidemiological study.

I would just observe that, in my opinion, bike thieves come in several varieties, with differing motivations, and the likelihood that a particular bike will be selected for theft depends a lot on the type of thief:

In the last two categories there's also the division of theft for the whole bike and theft for parts (or removing parts from the sitting bike).

Of these categories, the first will probably be put off by "uglification", but it will have relatively little effect on the second type of thief. (In fact, the second thief may be apt to pick a less-expensive looking of several equally available bikes, to lessen the seriousness of their crime -- at least in their own minds.)

The third thief will have specific attributes in mind for a bike and may or may not be put off by the obfuscated appearance, depending in part on how perceptive he is. (But keep in mind that of the four he's the most likely to spend time studying the fine points of the bike.)

The fourth thief will likely know how to recognize a valuable bike, even obfuscated, but may choose to pass over one that has been permanently defaced or which would take too much effort to clean up.

You can also evaluate these categories based on how effective locks will be. The first thief is apt to be deterred by a halfway secure lock but may (or may not) have at hand the wherewithal to defeat a lightweight one. The second thief will almost certainly pass over a bike that is at all encumbered with a lock, even skipping a bike locked only by the QR-attached front wheel. The third thief may be willing to spend some time defeating a lock on a bike he desires but may not be especially skillful, while the fourth thief will have the skills and tools to defeat many locks quickly.

The character of the neighborhood, time of day, etc, will affect the mix of these different thief types.

A few years ago in Toronto, what was probably one of the biggest bike theft busts ever happened. Igor Kenk was trading drugs for stolen bikes, and stockpiling them by the thousands. (Supposedly he was planning to corner the market post-econopocalypse or post-ecopocalypse and be a king). Anyways, you can see pictures or the thousands of bikes that he stole: 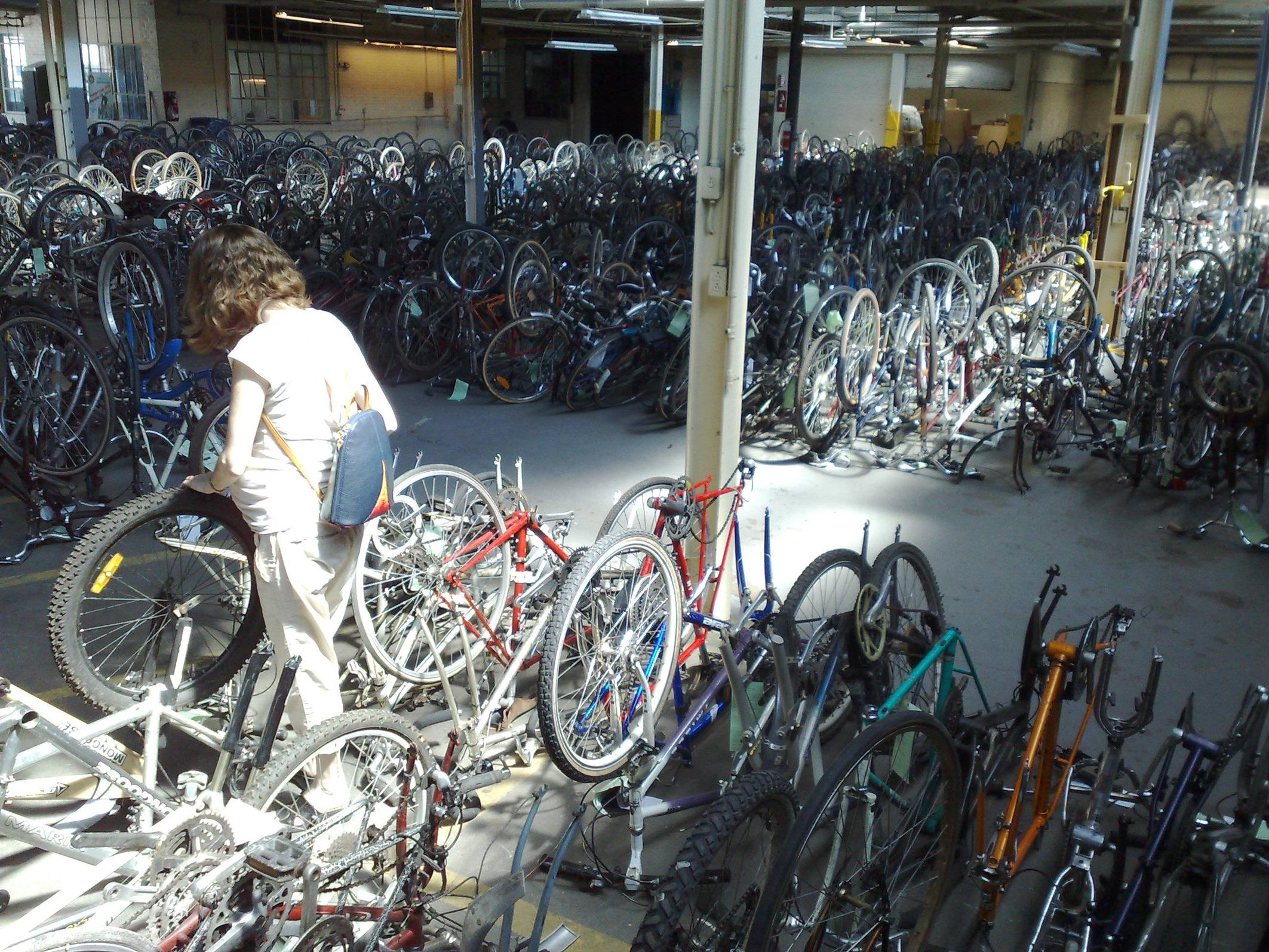 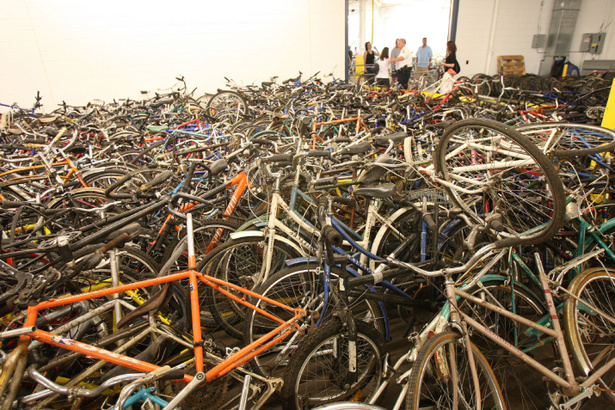 While there are definitely a lot of ugly bikes in there, I can't pick out any that are "uglified." It's not great evidence either way because I couldn't even hazard a guess about what percentage of bikes are uglified for comparison. I don't think you can draw much of a conclusion from it.

This may qualify as anecdotal evidence.My riding buddies carbon road bike had a section of top tube cut out to steal his kids $200 mountainbike off of the trunk mounted bike rack.

I've never experienced if uglify-ing your bike works as a deterrent, although I know that cycle couriers in New York use duct tape to cover up the bikes quality from potential thieves. As quite often they don't have the time to lock their bike up. Because of the numbers of them doing it, my guess would be that it works: They wouldn't do it if it didn't have some effect.

Currently I'm experimenting with this. I've just got my frame sprayed black to allow it to blend in. On top of this, I'm going to place duct tape over the frame and cables to hide the quality, at the end of the day I'm not bothered if people know what bike I'm riding, it's the ride that matters, not how it looks!

The aim in using a "beater bike" is not to reduce risk of theft. Bikes of low value have a market, too. The aim is to MITIGATE loss.