Why offset the rear rim to the hub and not the hub in the frame?

I'm currently reading The Bicycle Wheel by Jobst Brandt, and I'm reading all of the issues with offsetting the rear rim toward the drive side of the hub...

Asymmetry in a rear wheel built for a multispeed gear cluster makes it weaker against side loads coming from the right side. This means that the wheel bends to the left more easily than the right. The greater the offset, the weaker the wheel. In order to reduce offset for six-, seven- and eight-speed clusters, hubs have been built with narrower flange spacing. Although they reduce the disparity in tension between left-side and right-side spokes, they weaken the wheel against lateral forces.

So, I'm curious, why is it the standard to do so? Why not center the rim to the hub just like the front, and then offset the frame's drive side rear triangle to accomodate the difference? It may shift the chain line a bit, but this doesn't seem like anything that challenging to adjust for. The strength and durability benefits are huge, and the only downside I can see is that you couldn't arbitrarily change rear hub widths (not that it seems they change that often anyway), or you may have to introduce the offset again. Why don't bicycle manufacturers start doing this instead? Do they make frames that you can use a rear wheel built with the rim centered on the rear hub? 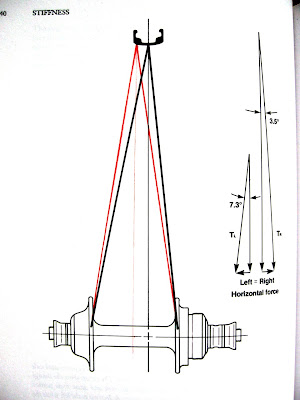 The biggest functional reason actually would be chain line.

You could make the hub shell wider, and run an offset dropout to allow the space for the gears, but then you would have to run a similar offset on the bottom bracket to maintain a usable chain line.

Running the offset on the bottom bracket would affect Q factor positioning on many riders, and while some riders like or need additional stance width, most do not.

Because a change like this requires such a radical redesign of pretty much every bicycle component, it would require a consensus from the entire range of bike manufacturers to be put into practical or wide spread use.

So you could call it tradition, but I think momentum would be more accurate. The existing body of design work would need to radically change to accommodate something like this, and that is a lot of "mass" to shift.

Since existing wheel structures and designs are working for riders as is, most companies choose to stay within the range of difference that allows the bike frame and other component designs to be affected as little as possible.

After all, there is no guarantee that an offset design would work in practice, and the benefit to it isn't major, given that existing designs work.

At first I read you to mean an off-center wheel plane, but not so. Interesting question, i.e. does a bike remain stable/rideable if rear axle is not symetrical? I guess yes, as long as front/rear wheels are in line, but practical clearance issues immediately become apparent.

Tolerances in modern frames and wheel-drivetrain designs already nearly max out every clearance there is. 2mm is a huge gap, exceeding the clearance between chain and right rear seatstay in the smallest rear sprocket; since the wider rear hub of 130mm (135mm in tandems) years back, clearance between rider's ankles and the right chain stay can cause contact. Solutions to spoke issues have included narrower rear hub flanges, and asymetrical rear rims, as you mention, but I have seen no studies documenting significant weaknesses in either design solution; weaknesses instead occur in poor manufacturing criteria, quality control, loose spokes, etc. No studies (beyond pure theory) indicate a well-made rear wheel has a dramatically weaker resistance laterally from one side versus the other? Has there been a rash of left-turning rider crashes due to rear wheel failures I haven't heard about?

As mfg. insist on solving more non-existent problems (ie 47-sp rear cogsets) eventually every current frame will be obsolete, and your solution of a wider rear axle standard* will be reality, but not to solve your problem. It will instead create new problems, all of which will only be "solvable" by purchasing all-new bikes, totally incompatible with all that came before. * It's here - Shimano 11-sp rear hubs actually are about 1.5mm wider than 130, which is considered safe to cram into rigid carbon rear drop-outs. It may or may not provide for chain clearance on current frames, and requires all-new incompatible chain as well. Why are the frogs in the warming pot not screaming yet?

As a builder of home bicycling contraptions myself (recumbents not bicycles) but also as a nationally competitive TT'ist (seniors) I have a comment on centering.

Of course making the spoke offset symmetrical would (as mentioned prior) push the cogset far out, perhaps in 35-40mm range (just a rough guess).

To keep the chain line correct would force the right pedal to shift out to match (as mentioned prior also). It has been noted in cycling literature that it is no coincidence that the world's best TT'ist also ride with their knees close together. It has also been documented in MIT's wind tunnel that the gap between the legs is a major contributor to air drag (noting that a bottle on the seat tube sometimes lowers air drag because it fills that gap).

Now, if you are talking about riding MB's, aero doesn't matter much but if you a road guy who'd sell his soul for .1 mph, then it does.

There are two alternatives to asymmetry in the spoke tensions of rear wheel:

Traditionally, the way asymmetry is handled is in spoke tensions. It should be noted that the author of The Bicycle Wheel is a prophet of doom. There are the following examples in the book as the degree of asymmetry:

So the problem is not as bad as it is claimed in the book. Certainly however an over 100 kg rider should avoid using a 130mm OLD 11-speed road bike in offroad situations if using 23mm tires pumped to over 120 psi, especially if the spoke count is lower than the optimal 36, but that should be obvious anyway.

So let's consider the alternatives to spoke tension asymmetry:

The problem of rim asymmetry is that it typically modifies the rear rim to be different from the front rim. Thus, every bicyclist having a stock of rims in home needs after this modification two stocks of rims: a stock of rear rims and a stock of front rims. The doubled rim stock costs makes this solution rather poor. There are two alternatives to this: firstly, it is possible to make the rim asymmetry half of the rear wheel natural spoke tension asymmetry. It might allow using the same asymmetric rims in both front and rear wheels. Secondly, with the advent of disc brakes, it is possible to take the rear rim, reverse it and install it to a front wheel. Disc brake front wheels too are asymmetric but in the opposite way.

Traditionally bicycles used rim brakes and the desire to have only one rim type made rim asymmetry quite rare. However, disc brakes and reversing the rear rim in the front could make this solution viable today. I wonder why asymmetric rims are not becoming very common today. Perhaps bike manufacturers have not realized the usefulness of asymmetric rims as the standard rim in disc brake bicycles.

The problem of frame asymmetry is chainline. Today the best bottom bracket standard is probably Hollowtech II and Hollowtech II cranksets have fixed chainline. You can't adjust it like you could with square taper bottom brackets. So an asymmetric frame would have a chainline optimized only for the big ring, and the little ring would be useful only with the very largest sprockets. Not very desirable. Of course an option could be to use non-standard crankset parts for modified chainline.

My electric bike, Cannondale Synapse Neo EQ, uses this concept of using asymmetric frame with mid-drive. It has a frame asymmetry of 6mm, called Cannondale AI. I think it's useful in this very bike although for non-electric bikes it would be less useful.

Not the answer you're looking for? Browse other questions tagged wheels frames wheel-truing wheel-building framebuilding or ask your own question.

21
What is an asymmetric wheel and why would you use it?
1
Proper spoke tension when dishing to the side of the hub

3
Rear wheel not centred, presses against one of the brake pads (Rohloff hub, Magura rim brakes)
1
dishing on alfine hub
7
Flashpoint FP80 / SRAM S80 - rear hub specifications?
4
Rim dish and flange angle problem
1
How much will 4mm dish weaken the rear wheel?
2
Wheel Building - Should key spoke be inside or outside flange?
2
Using 16 hole front rim to build a rear wheel
2
Is this spoke tension too low?
3
Rear hub assembly becoming loose, not allowing backward spinning
6
Why is my wheel going out of true after I mount and inflate the tire?