Having some problems with my seat. I have a Cube Analog Disc 2012 bike. After only 100km, the seat started creaking. I sent it back to the shop and received a brand new seat instead. But unfortunately, after another ~200km, the seats started creaking softly, but I believe that in a few days, the irritating creak from the first seat will come back.

It's worth mentioning, that the creak comes from right under the seat, from the plastic that sustains the fabric; right between the front and rear supporting points. Also, I have only 66kg, so weight is not the problem.

I've included a photo so things would be clearer. 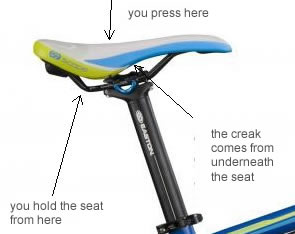 Has anyone stumbled upon this issue? What should I do? I believe it's not a solution sending the seat back for replacement once every two weeks...

It's unlikely that the issue is the seat itself.

In 99 cases out of 100, the issue is that seat clamp at the top of the post that holds the saddle rails is loose, or wearing. Usually loose.

Grab your set of allen keys, find the 5mm or 6mm which will fit the 2 bolt there, and tighten them up to about 10-12 Nm. If it still creaks, consider replacing the post, but it shouldn't come to that.

buy a better seat, I have a CUBE Agree and needed a seat upgrade, a good quality, comfortable seat is an important upgrade as a rider gets more serious on any bike. Look at specialist manufacturers and web forums on this issue, it will narrow down a lot your choices. I now have a '2012 Fizik Aliante VS'.