How To Prevent Holes Around The Inner-tube Valve?

In the last two months I have experienced something new: three inner-tubes (700X25) have popped with holes immediately around the valve and on the same side of the tube as the valve. I suspect there is a deficit of support for the tube as the hole in the rim for the valve is slightly larger than necessary (1-2mm bigger in diameter that I would think best). Should I replace the rim-tape? How may the proper support be imparted to the inner-tube around the valve?

I had a bike shop for 10 years and have 35 years extensive riding and bike innovation experience. This problem had me dumbfounded: six tubes in rapid succession, blown inside the tire, within an hour or two of pumping up, with a dimple on one side of the the elliptical valve reinforcement, and a split on the other.

Cleaned up sharp edges on valve hole in rim, on spoke nipples, on rim strip--sure we'd got it that time, then "Bam!" After the fourth tube, I scoured the internet for the answer, saw dozens of accounts of this issue, dozens more theories, nothing definitive. Double rim strip, super clean...pumped it up..5th tube I was watching the valve core as it blew and the air leaked out...and the valve stem moved up and down in it's hole of it's own accord.

This sparked memory of "Useles's" herniated tube theory. 6th tube I followed the usual procedure, and tried to pull the valve down with the tire partially inflated. It pulled back-the start of the hernia was pushing it back up!

I deflated the tire further, pushed the valve up (to get the tube from under the bead), then pulled it down and it settled easily way further out than it had been. Pumped it up,no space for a hernia, no hernia, no blow out.

I had a spate of these; all the tubes had an elliptical, smooth rubber section immediately around the valve, and then a weld joining this to the body of the tube. The failure was always at this weld, and it looked as if the tube had herniated (bulged out in a single spot before bursting there).

The elliptical section is less flexible than the main body of the tube, so after pushing it above the bead as Zippy suggests, it wasn't fully descending to sit flush against the rim. This left a void between the rim and the less-flexible part of the tube around the valve; the more flexible section of the rim then tried to expand around the weld to fill this gap, and that's where it burst.

The solution is (touch wood) to pull the valve back down after the tyre is seated and the tube partially inflated, and tighten the nut more than usual (and then slacken off). When the tyre is fully inflated, double-check that there is no bump near the valve, that the bead is seated properly there, and that the valve doesn't move if you tug it towards the hub (not too hard!).

There are 3 things to try, in this order:

It can also be the result of riding the tire while the pressure is too low. When you do that the tube tends to move in the tire and can get cut against the edge of the rim.

A picture would probably be very helpful. In particular, a close-up picture of the rim around the valve hole, with the tire installed and at least partially inflated.

I agree with the diagnosis of a Presta valve being used without a grommet in a rim drilled for a Schrader valve.

But it may be possible that more than one thing is causing your flats. When you install a new tube in a tire, the rubber holding the valve to the tube can get caught under the bead, and this can cause a flat. The remedy is to push the valve into the tire when you install it. What I mean is, push on the valve stem, like you see in the first 15-20 seconds of this video.

Too, sometimes the adhesive on rim tape is not good, due to age, oxidation, or the rim tape itself is poor quality (like the tape sold by a large national chain of bicycle stores). The tape can move around during the installation of a new tube, exposing spoke holes and/or valve holes. This can cause a flat. The best solution is to either use good rim tape, of the proper width for your rim, or, even better, to use a rim strip.

I've tried all of the things mentioned in the other answers here and still had problems. I eventually found a solution that worked well for me.

I made a little "patch" to reinforce the tube around the valve. I cut out a piece of an old tube about the width of the tire, maybe a little smaller. Then, I cut a little slit in the center, just big enough to push the valve through. I mounted that little "patch" on the tube and then installed the tube normally.

It reinforces the tube so that a hernia can't push through. Also, if there's anything sharp on the rim it rubs on the "patch" instead of on the tube.

I don't have one handy to take a picture of, but the finished product looks kind of like this: 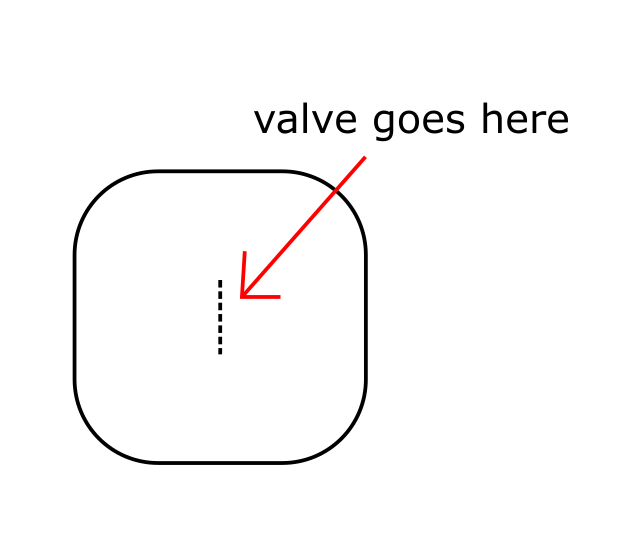 Those rounded corners are important. The first time I tried this, I just cut a regular square out of the tube. The corners rubbed through the tubes. Once I rounded them out, it worked great.

I've heard people say that this can damage the tubes, but I've ridden hundreds of hours on all kinds of bikes using this solution and have never seen any problems.

I had constantly the same problem with my Presta valve stems. Finally I widened the hole in the rim, inserted a rubber grommet and used a few turns of double sided hockey tape on the rim. Two years later and I never had this problem again.

You probably have double rims....meaning there is the normal rim, and then an interior support rim. This means the valve stem is really locked square...so if you twist hard on the tyre, and the valve is right above the tire that is touching the floor.. the tyre will bend, but as you have double rims, the valve stem stays perfectly straight. If you had single rims the valve stem would also bend over a little. but because it is straight and rigid, it causes the valve to tear.

The only way around this that i can think of is, 1. use a schrader valve, as it seems you must be doing a lot of rough riding. 2. get new tyres, so they are more rigid than the old things you are using, so they wont flex as much when you twist on the road right under the valve. 3. get single rims, not as rigid but at least the valve stem can move as the tyre flexes. 4. always carry a spare tyre and a pump.

note once the valve stem goes, you cant even fix the puncture...its a real pain.

I’ve had four punctures over the past year within a few millimetres of the valve which are often impossible to repair.

I’ve started reinforcing the tubes with a circular patch about 30mm across, cut from a sheet of patch material. I cut a hole just big enough to fit over the valve using a short length of small metal tube. I hammer this on a paving slab to punch a neat hole - too small a diameter for scissors.

No recurrence of similar punctures so far!”

I placed a large tube patch (centered over the valve) along the area where the tube quickly wears.

torytory
11
Add a comment  |
Highly active question. Earn 10 reputation (not counting the association bonus) in order to answer this question. The reputation requirement helps protect this question from spam and non-answer activity.

4
How can I avoid tearing the valve loose from an inner tube with a wheel lock?
5
Why do I keep getting cut looking flats?
0
Multiple flat tires on front

1
spoke end poking out of rim, thinking it may be reason why Im getting flats
6
Tube puncture over spoke, but rim tape fine
2
Why might my inner tubes be getting consistently punctured?
0
Repeated front wheel puncture
4
How can I avoid tearing the valve loose from an inner tube with a wheel lock?
5
Why do I keep getting cut looking flats?
2
Schrader inner tube gets cut by Presta sized hole in rim
2
Inner tube valve cut from stretched rim tape?
2
Multiple double holed punctures on the rim side of tube
0
Alwasy getting a flat rear tire on my 14"inch folding bike