Babies on Bakfietsen: How young is too young?

When is it safe to transport a baby on a bakfiets? How does one know when a child is old enough for this?

By "safe" I mean, protecting the child's brain from damage due to road vibration, pothole jolts, etc.

And by the baby would be strapped into a car seat anchored in the box of a bakfiets cargo bike.

that's me in the picture above! Hi, all.

I carried both my babies by bike-- they came home in-arms onboard pedicabs, and started in the Yuba rig pictured quite young (baby #1 at 7 weeks, baby #2 at 3.5 weeks).

The American Pediatric Association says babies should not ride on bikes until they are one year old and can support the weight of their head + a helmet while sitting upright in a child seat or trailer. They vaguely cite vibration damage to the spinal cord as reason to refrain from carrying them younger, though if anyone can show me the study that indicates that a baby in a car-seat onboard a bike suffers more jostling than a baby in a stroller or a baby-carrier, I'll give you $50. I've searched, including PubMed and other scholarly databases, and it appears that the APA's finding is based entirely on speculation rather than scientific analysis. Which makes sense, as Dutch infants travel this way all the time without a rash of bike-based brain injuries. I am unconvinced by the APA's recommendation and, for my own children, have chosen to ignore it.

Any form of travel is going to involve some bouncing; once you decide that your baby will benefit more from leaving the house than from being safe inside it you are exposing him to some danger. Auto accidents are the leading cause of death for children in the US, remember. So get over this notion that bike travel is this exceptional form of risk for your baby. We put some foam under the strapped-down car seat to add a bit of extra suspension, and were as careful as possible to choose the smoothest available line while riding, but ultimately, some bouncing is going to happen. And that's probably fine (add caveat here where I am not a doctor nor a lawyer, just a mom with two healthy-and-clever-so-far bike-carried kids, ymmv).

So my feeling is, as long as your kiddo is reclined and secured, even the littlest babies are safe on bikes, as long as the bikes have competent riders and safe places to ride.

Nota bene: a baby in a car seat should not wear a helmet: the extra material under the back of their head would put unsafe strain on their neck and defeat the purpose of the reclined & secured position. This means that, in states with a child (or universal) helmet law, carrying a baby on a bike is de facto illegal. I feel that strapping a baby to a big seat-shaped piece of styrofoam rather than a little head-shaped piece of styrofoam provides similar protection, however, the letter of the law in my state (and maybe yours) disagrees. I'm grateful to have never had to take the issue to court, and haven't heard of anyone else doing so either. But, something to keep in mind.

For another perspective on this issue, see: http://totcycle.com/blog/baby-on-a-bicycle.html

To me it depends more on road and traffic conditions than age. If your roads are potholes linked by mounds of gravel and inhabited by mining trucks doing 100kph, 16 years old is too young. If you've got good roads with low speed limits and lots of bicycles, I'd be happy picking mother and child up from the hospital on a bakfiets.

You should also be an experienced cyclist, used to the bike you'll be using to carry the baby. At the very least you should be long past the point where you ever accidentally drop the bicycle while stopping, for example. Your skill level should match where you're riding with the baby.

There's two considerations for the bicycle: use a suitable baby-carrier designed for new babies (they usually have their own extra suspension, and the baby lies flat); I would run the fattest tyres I could get and keep the front one soft, just for a bit of extra padding on the bumps. Usual caveats about making sure the baby does not get cold/ hot/ wet/ dry/ hungry/ bored/ overstimulated etc apply :)

In Australia I don't think there are any standards-approved newborn carriers for bikes, but I believe the Gazelle Cabby MaxiCosi was being considered so that may have happened (the problem is that the standard doesn't really have a "baby seat for bicycle" category, and the motor vehicle standard doesn't work). I have seen a baby less than 6 months old in a generic "baby basket" loose in the front of a bakfiets in town. Mother and baby were quite happy with that arrangement.

But really, I think it's mostly about the road conditions. Smooth roads, well shared mean you can carry almost anything.

Here is a practical example of somebody who has experience with transporting kids in bakfietsen: http://www.bakfiets-en-meer.nl/2008/11/04/kyokos-bakfiets-cargobike/

I would agree with Kohi's answer. It would also depend on your level of skill as a cyclist. If you are not familiar with riding a Long John or other kind of cargo bike, getting one as a "congradulations!" present would not be appropriate, you have better things like...sleep...to consider. Securing the baby seat to the cargo area is important. Make sure you leave room for your diaper bag. 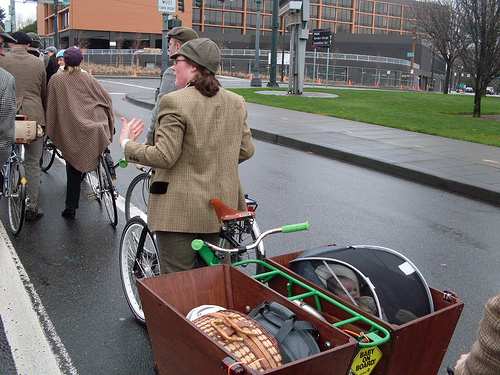 Not shown in the attached picture is that there is also an umbrella she uses as a rain and sun-shade her baby.

Also, as for vibration, the amount of vibration an infant can tolerate would generally match how much jogging, jostling and walking and dancing the mother did while pregnant. Motion tends to lull infants to sleep, and the sound of tires on pavement would be much like white noise. I cannot cite, but I have heard from a birthing instructor that the sound an infant is used to matches sticking your head under a tub spigot turned full blast. So I wouldn't worry about traffic noise.

17
At what age/stage should my child be at before I start using a child seat?
5
City Bikes vs E-Bikes with baby trailer

18
Child seat: how to keep the child's head from falling forward?
16
Are 22mm tires too thin for commuting?
9
Armor and helmet for ultra-safe commuting (womens size)?
12
How can I prevent cars from passing me too closely?
4
How to determine if a decline is too steep for safety?
3
DIY solution for carrying kids on a long-john: ideas?
1
Can the iBert safe-T-seat be safely mounted behind the seat post?
5
Safety of lateral (flexible) flags to prevent cars from passing too closely and signaling
9
Max weight of child, for rear bike seats - why is it always (seemingly) 22kg?
2
Axle is too short