What electric bikes are for sale in the US, and how good are they?

I am interested in purchasing an electric bike but am puzzled as to what brand is best. It seems as though most companies are importing their products from China, which is great because they are low cost but they look bulky and maybe even cheap quality. There aren't many electric bike manufacturers let a lone traditional bike manufacturers in America.

commuter hybrid-bike electric-bike
Share
Improve this question
edited May 31, 2012 at 1:02

One of our bikes is an electric bike. It's an older iZip HG 1000, and although we got it through the American "manufacturer" (Currie Technologies), like most of the low-end ebikes it's made in China of heavy steel and uses cheap, cheap, cheap components. For example, it has these awful band brakes because they're slightly cheaper than cantilevers. (Those pics are not of my bike.)

When we bought it a couple years ago, most of the department stores (WalMart, Zeller's, Canadian Tire) had bikes of similar (low) quality available under a variety of brand names - iZip and Schwinn (both also from Currie) were the most common.

However, even though I've always referred to our ebike as a cheap, made-in-China piece of junk, in the first 6 months we had it I commuted 40km a day and put 2500km on it. It hasn't been used as much since then, but it's still going. OTOH, it has required some work... For various reasons, it has a two-part drive-train: a short chain from the cranks to an intermediate sprocket, then another chain from there to the freewheel. As shown in the following picture, I managed to shear off all 4 bolts that held the two cogs on the intermediate sprocket together. (And to get access, I first had to take apart 4 or 5 pieces of plastic bodywork.) 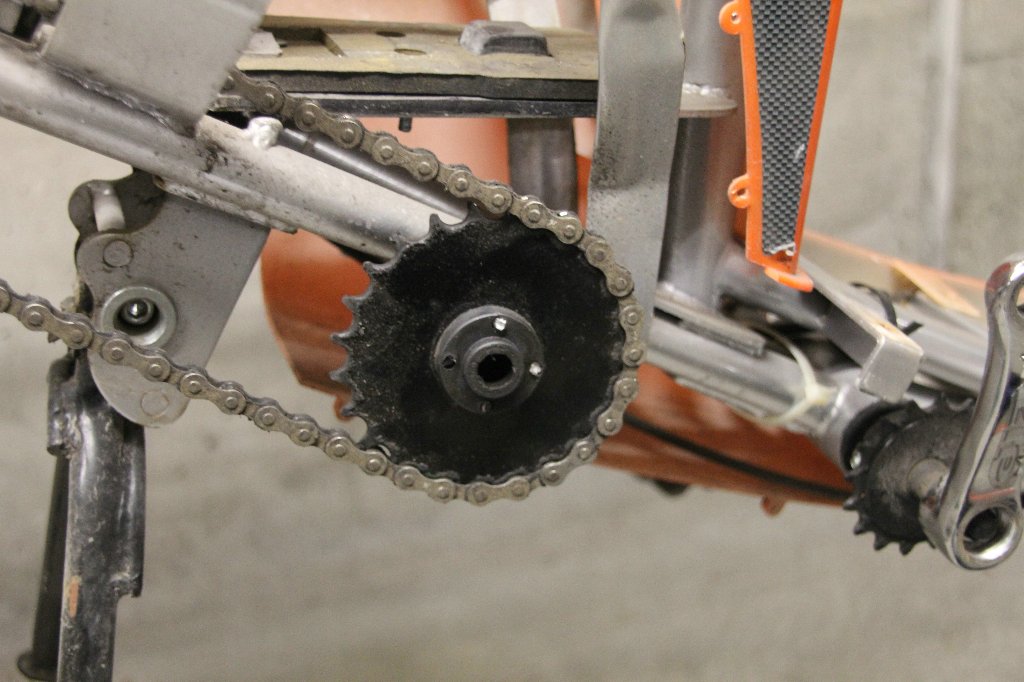 So it comes down to: you get what you pay for. If you don't abuse it, a cheap ebike might do ok, but fundamentally it's made with heavy, low-quality steel, and cheap components. Bikes like that can be serviceable, but are simply not very good.

One brand that seems to be associated with somewhat higher-quality bikes is BionX. I think they are still mostly a supplier of LiIon battery packs, motors and controllers, and many different companies sell ebikes built with BionX drive systems. You could look for local dealers who sell bikes made with their components. I'm sure there are other companies that supply drive systems to bike shops.

Trek makes some electric assist bikes. Although I've never ridden one of their electric bicycles, Trek is known for making high quality bicycles. Definitely one of the brands you should look into depending on your budget. The base price as listed on their website is just a little over $2000. So much more than the Walmart electric bikes, but you get what you pay for. I've seen them in the bike stores up in Canada, and that link is for their US site, so they shouldn't be too hard to find a store that carries Trek bikes. Their electric bikes basically look a lot like their commuter or hybrid bikes, with an electric assist motor attached. The FX Plus Electric, to me looks like the 7.5 FX with slightly different components, and an added electric motor.

Not the answer you're looking for? Browse other questions tagged commuter hybrid-bike electric-bike or ask your own question.

5
How can I stop a belt brake (band brake) from squealing?