I'm attempting to refurbish a bike that I was given, it has a (not sure what brand) coaster brake, which according to sheldon brown's site has a peculiar kind of cone nut. The wheel might be 10 years old, it's hard to say.

I've been able to remove the otherwise butchered nuts (see below) using a tap & hammer and an axle vice, now that they are free I'd like to know what they are, so that I can replace them, do they have a special name?

I've only ever seen mention of cone nuts resembling a regular washer, but with two flat sides (sorry for the poor explanation) - these that this bike is fitted with are something different, see below:

Apologies for my dodgy graphics work, the middle is threaded, and sized to fix the (slightly larger than the wheel nut thread) centre of the coaster brake axel, the outsides smooth (very much resembling a washer) except for the two grooves.

The entre part is perhaps 20mm in diameter; unfortunately my bright idea of drawing the part, and then using Google image search has failed me!

In the end, I'm sure this particular bolt is a strange european relic designed as some kind of "security" bolt; not dissimilar to the Apple style 5-point start, or similar, to discourage people against fiddling with their coaster brake. But I would really like to rebuild the brake!

I'm sure I could replace them with regular "cone nuts" - that is the ones with two flat sides, but the term "cone nut" seems to refer more to the purpose than the design of the nut itself.

All information appreciated, thanks in advance!

The term "cone nut", on a bike, generally refers to the nuts that comprise the outer half of a bearing race (the inner half being formed into the wheel hub or whatever). The "cone" side, which faces inward, has a concave profile so that the balls will roll smoothly in it.

It's hard to tell what you have from your description. I do vaguely recall some cases of nuts on coaster brakes with slots like that, apparently intended to be operated by a "spanner wrench" (which is a redundant expression in the UK, but means a wrench with pins rather than flats in the US). Presumably this allowed the nut to be more readily adjusted while everything was assembled. (Current bikes require a thin "cone wrench" for the same adjustment.) If this is all it is then a hex-sided/flat-sided nut (with similar thread/profile) should work just fine.

I've also seen, internal to some coaster hubs, various plates and nuts with slots or teeth, intended to engage mirror-image features of the hub or an internal rotating piece. These would be quite specific to the particular hub.

And it may be that this nut is a cone nut for internal bearings, such that the nut cannot be reached for adjustment with a regular wrench (even a thin one). In that case you'd have to figure out something.

It's remarkably hard to find a good image of a cone nut. Here is the best I could find: 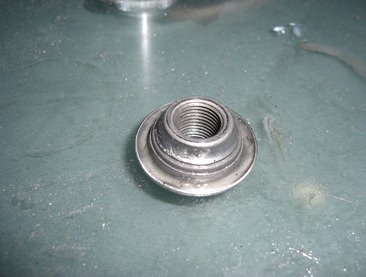 This one has a sheet metal dust shield fastened to the outer diameter -- the nut itself is inside of the inner flange of the shield. On the back side is a regular (though fairly thin) hex nut or (more often) a cylindrical body with two flats, sized to take a thin open-end wrench.

(It should be noted that it's become common to refer to any nut that secures a bike bearing as a "cone nut", even though it may be securing a sealed bearing cartridge and hence lack the conical extension. This adds a lot to the confusion.)

Not the answer you're looking for? Browse other questions tagged brakes tools coaster or ask your own question.