Is it possible to use road-style brifters with an internal gear hub?

I have a touring bike with road-style Shimano brifters, which I love. I'm also very intrigued by internal-gear hubs, but these hubs seem to focus on rotary or push-button shifters.

Is it possible to run an internal-gear hub, especially one of the 11-, 12-, or 14-speed ones, with road-style brifters? And if so, what parts would be needed?

Based on the number of other people asking the same question around the internet, I suspect the answer is no.

This page contains the best wrap up I've found of available shifter options for Rohloff hubs.

Mittlemeyer may be bringing out some brifters that work with hydraulic brakes in September, but they've already delayed their earlier March release date.

An ugly solution would be to build a cable pull adapter for one lever, then use the other lever to pull that back and forth. That would give you more cable travel and more indents, so you might be able to get the indexing to support more gears. I fear that some hubs have variable travel between gears, though, so that's not guaranteed. If it does work you're going to have the ungainly adapter hanging round somewhere on the bike where it can move. Which is going to be messy and I'm not convinced of its longevity. But it would be easy enough to make one and see whether it works, assuming you already own the hub/wheel to test with. If you do, I suggest building one and seeing what happens. Maybe even build a double beam version to start with rather than machining up a travel adapter. Then slide the cables along the beams until you find an arrangement that works. 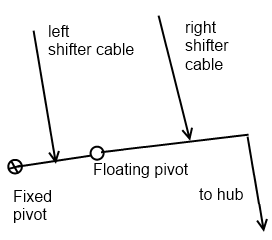 For Rohloff, as heltonbiker said in the comments, you have two cables and need to pull in both directions so that's not going to work. The twist shifter rotates 273°, so a brifter would need closer indents (less rotation) or a very long travel (from almost hard against the handlebar on top, to the same underneath it. Various people have tried to make adapters to fit Rohloff shifters to drop bars, but they (IMO) don't work very well. Broadly, they either mount the Rohloff twist grip on the end of the drop bars in a slightly odd position that leaves cables wandering everywhere; or they rely on what amounts to a straight bar with drop bar bar-ends fitted. Either way, twist shifting.

Not the answer you're looking for? Browse other questions tagged drivetrain internally-geared-hub or ask your own question.