How can I remove a stuck rear cassette?

I've been trying in vain to remove a rear cassette that I myself installed about a year ago. I may have over-tightened the lock ring and now I can't remove it no matter what position I hold the wheel-chain whip-wrench combination. Any advice on what to do to get this cassette off (short of going to my LBS)? The wheel is relatively new and the cassette is very new, and the reason I want to remove the cassette is to replace a broken spoke. 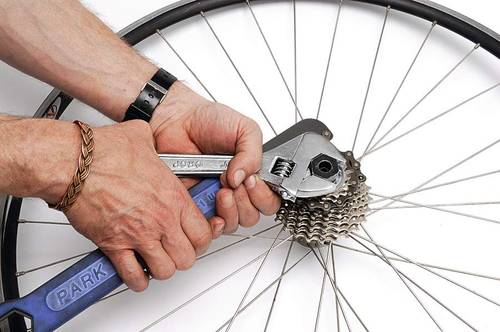 I have just discovered it (instead of the classical "one tool per hand" technique) and it helped a lot.

I used a domestic hairdryer for 2/3 minutes , applied the extension and it finally gave. Would also advise against using a blowtorch as may damage components.

Did you yourself grease the threads before installing? This is especially important when the lock ring is aluminum. I'll assume your free hub body is either steel or titanium and there's no grease. If force alone won't move it, it's time to try leverage or impact or both.

In the shop they'll ask you the above question before putting the wheel on the ground with the right (or cassette holding) chain whip in a position where it cannot move (under a table or something solid and heavy). The lock ring tool or wrench can have a longer lever attached to it and push straight down. If that doesn't work, get a plastic hammer and try impact. Good luck, and always grease your threads..

You should secure the cassette lockring removal tool with the quick release skewer or axle bolt, just enough to hold it in place (although some removal tools don't have a hole in the middle for you to do this). This means you can use more force without fear of the tool slipping.
Then use a long handled wrench (spanner) and chain whip. A box-end wrench (ring spanner) will give you more purchase. Otherwise use a vice in place of the wrench (spanner) and just turn the chain whip counterclockwise when looking from the side of the wheel not fixed in the vice.
When using the wrench and chain whip, if you can't push the two tools toward each other to remove the cassette, you can inflate the tire fully, and go for the most mechanical advantage by having the spanner and whip handles forming a v with angles of about 120-150 degrees. Then push down on both handles. This does run some risk of damaging your wheel though, so only try this as a last resort.
You can also try putting the chain whip on the larger sprockets for more purchase.

I'm an engineer and encountered many stuck bolts, nuts and threads in my time. I just tried to remove my rear shimaneo cassette off a 3 year old bike. I used the correct tools and really put all my weight and force into it, but it wouldn't budge. So i decided to apply a little heat from a blow torch. Being careful not to overheat the whole wheel hub, i gently heated it up and then i tried the sprocket socket, and it turned without even needing a spanner. I should have tried that before i applied all my weight and what might have happened, if it suddenly gave way. Even though I've done this before, i was amazed what a difference it made, much safer than jumping up and down on a 5ft scaffold tube!

Wow... I pretty much gave it everything that I could find in my garage tonight, but like most... I have no vice. I even tried a pry-bar between the whip and the wrench, but the whip (Park Tool) is not real rigid and it started to bend. Before I shamefully gave up to go into the LBS, as a last resort, I clamped the chain whip to my workbench table thinking that maybe I can get enough clamping force to simulate a vice before it slips.

Voila. I couldn't believe how easy it was by comparison. While I still needed a breaker bar, this was the most effective thing to do. 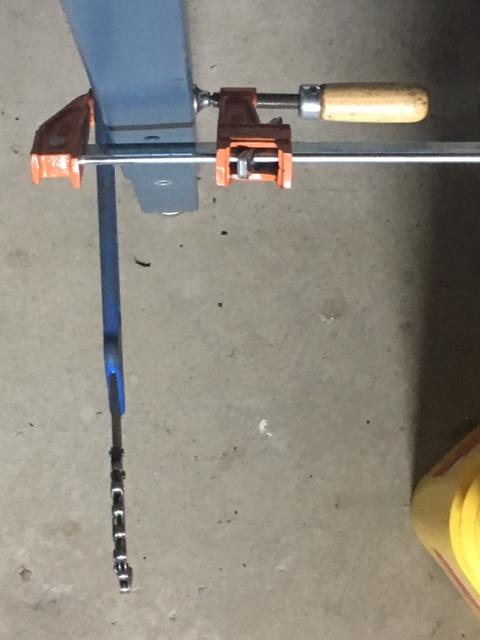 Use a massive pipe wrench instead of the chain whip

I have a Shimano Claris CS-HG50-8 11-34t cassette which I wanted to change for a new one, and was trying to remove it for the first time with Park Tool PAW-12 adjustable wrench + Park Tool SR-12.2 chain whip + Park Tool FR-5.2 Cassette Lockring Tool but failed.

I took it to the bike shop, and the mechanic, unable to do it with my tools either, took out the big guns: a massive adjustable pipe wrench, with teeth that look a bit like this:

but longer than the one on the photo, maybe it was like 50/60cm long.

He wrapped the teeth of the pipe wrench around the cassette directly (more or less as the chain whip would), and together with my PAW-12, he was able to remove it but putting the wheel on the floor and pushing down on it as I had been trying before with the chainwhip.

I guess a similar effect could be achieved with a cheater bar, but that worked really well.

This might not be a great idea if you want to reuse the cassette. I didn't see severe damage though, but I didn't inspect the cassette very closely afterwards.

Not the answer you're looking for? Browse other questions tagged wheels repair cassette or ask your own question.

22
Removing a stuck pedal
8
What tools are required to replace a spoke?
1
Rebuilding a rear wheel
1
Rear cassette 'ticking' forward, making chain catch, what is the problem and how do I solve it?
3
Upgrade from 7-speed SunRace to 10 speed Deore: can I use the same wheel?
1
Loose cassette on road bike
1
Do you need to remove the disc rotor to replace a drive side spoke?
4
12 speed cassette touching spokes
5
Using a chain-type oil filter wrench as a chain whip