If one were to take a single-speed flip-flop hub, and fit two identical freewheels, and couple them to two identical chainrings (i.e. two drive-side cranks, one on each side of the bike), you would have the world's heaviest and least efficient fixed-gear drivetrain. One freewheel coasts while the other drives. (The left-hand pedal would have to be fitted with a right-handed axle, and thread-lock used to prevent it unscrewing due to precession.)

Why anybody would want to do it is beyond me, but I am certain that this would work.

What if one were to do the same thing, but with a slightly larger chainring on the drive side, and a slightly larger freewheel on the non-drive side? (Obviously magic ratios would have to be selected for identical chain lengths.)

Would this provide a long gear for high top speed, yet provide a shorter gear for less strenuous leg-braking? Or would the freewheels somehow skip and bind? 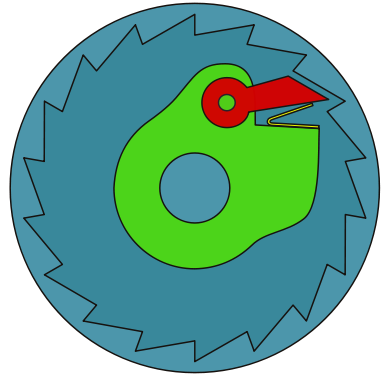 Both pawl and freewheel are in forward
That little spring is pointed to the front of the bike.
The front wheel is to the left of the picture.
Both pawl start at 12 (of clock).
Left tooth at 12 and engaged.
Right (lower) tooth 3.
Turn the crank 1/4 revolution.
Left higher (2:1) is now at 6.
Right lower is also at 6.
On the right since the pawl (hub) is faster than the freehwheel it slips (coasts).

Freewheel and pawl opposite
Right freewheel and pawl forward (spring pointed to front).
Left freewheel and pawl reverse - (spring point to rear).
Picture is now the right (lower gear) and the front font wheel is to the right.
Left start at 12 engaged.
Right start at 3.
Pedal 1/4 turn.
Left and right are now both at 6.
But now the right does not slip - the right engages.
Both pawls are engaged.
The left is engaged by tooth force on pawl.
The right is engaged by pawl force on tooth.
At this point they lock up.
For every two chain links the right is trying pushing out the left side is only taking one.
The pawls are attach to the same hub.
The left and right side of the hub cannot rotate at a different rpm.

After thinking about this for awhile, I think this would work, albeit somewhat clumsily. It would operate similar to a retro-direct, except with no reversing for the second freewheel. You would have to use good quality freewheels to avoid having both of them engaging together and binding.

To answer a commenter Blam:

Just how would you expect it to magically shift grears? The are both attached to the same axle.

The two freewheels being engaged in opposite directions would result in only a single freewheel being engaged at a time. He wouldn't be able to 'change' gears, going forward, but would see a different torque profile when slowing down compared to when going forward.

This is my mental experiment on this.

Now, if the freewheel is installed normally (i.e. freewheeling on coast) then this happens:

If the freewheel is on the higher gear side, then it wants to move the bike faster, but the fixed side wants to go slower, so the transmission seizes.

Second try: Somewhow the Freewheel is installed backwards, so it freewheels when you pedal forward, but engages on backpedalling:

If the freewheel is in the lower gear ratio side: When pedalling forward the fixed side dives the bike with the highest (fastest) ratio, the hub rotates forward faster than what the lower ratio tries to, the freewheel sees this as backpedaling (crankset rotating slower than the hub) so the transmision seizes.

I think that such arrangement woul not work, instead it would create potential catastrophic failure of the components due to them trying to drive one another with different angular speeds. However, I don't think the idea is to be dismissed, I think the goal of having one one ratio to accelerate and other to brake is to use two differently sized freewheels installed to engage in different directions. For this experiment I'd rather install a dual crankset with two identical chainrings.

Option 1: small freeweel engages while pedalling forward. The bike moves forward when pedalling normally using the higher ratio, then when trying to coast, the small cog starts freewheeling and the larger one engages, trying to move the crankset a little bit faster. When it does, it might result on a temporary engagement of the small freewheel that depends on an obscure relation between the angular position of the pawls inside the two ratchets, but as you are trying to slow down the pedals, the process repeats until you come to a stop (maybe a very jerky one). Whether or not this works whould depend on how much each freeweel can rotate before engaging (i.e. how long the ramps are) compared to the difference in gear ratios between them.

Option 2: big freeweel engages while pedalling forward. The bike moves moves forward using the lower ratio, the smaller cog is reverse-installed so ir freewheels. When trying to slow down the small freewheel engages, making the crankset rotate but slower than the ratio of the big freewheel demands, so it won't engage. This would give you different ratios for accelerating and braking, but would not satify the O.P. desire to have the lower ratio for braking.

Feel free to comment any corrections, I'd be happy to edit accordingly.

Not the answer you're looking for? Browse other questions tagged drivetrain fixed-gear freewheel mechanical or ask your own question.

3
Is it ok to use fixed gear threads for a freewheel?
2
Planning on building a fixed-gear/single-speed from an old Schwinn World. What new parts will I need?
3
What causes frames to break at the (rear) dropouts?
1
How can I fix my back wheel's wobbling?
1
Ebike gear conversion
4
Difference between two drivetrains with the same gear ratio?
2
Changing the rear wheel offset to allow space for freewheel
1
Two brake positions on fixed gear/single speed
6
What to do with a busted freewheel on a vintage road bike?