Does anyone yet make an affordable quad chainring? I would love to see a 4x12 with my staggered cog idea such that all 12 gears are shifted progressively using the 4 chainrings. Each chainring would engage only 3 cogs. I think the "double shifting" would be quite easy. On the gear indicator (1 thru 12), every 3rd gear could be marked with a different color number to indicate to the rider that a "double" shift is required next. Generally when the rider settles into a good pace on reasonably flat pavement, he/she will only be using 1 chainring and using the 3 gears for it to fine tune the cadence. For example, if the chainrings are labelled A,B,C and D and each cog for each of those chainrings is labeled 1 thru 3, someone might be using C2 gear but shift to C1 for a slight headwind and C3 for a slight tailwind.

I think it is a good and interesting idea and would look cool too.

I played around in a spreadsheet and came up with these ratios:

Notice that the 15 cog repeats cuz the difference between the 36 and 44 chainrings is close enough to 20%.

Also notice the overall spread of the gears is a very wide 8 with a very low 1st gear (0.5) and a reasonably tall high gear (4.0). That should cover almost any situation for the average rider.

You could do this for the front with a Mountain Tamer Quad (which is an adapter which turns a triple into a quad) and an appropriately chosen front derailleur. The chainline issues become more severe than they do with a triple.

For the rear, you could use a 12 speed internal gear hub (Sachs Elan) or go up to 14 with a Rohloff Speedhub with a chain tensioner.

The question is why would you want to do this (like all your questions)? With 3x9's or 2x11's there are more than enough gear combinations that its pointless for riders to have more. With more gears, things have to be machined more carefully and become less robust as well. You need a good gear combination, not the perfect combination (though Nuvinci makes a CVT for bicycles). Also, who in their right mind looks at the cassette when shifting? Nobody. On top of this, front derailleurs are crude and sloppy devices just by how they work -- with 4 chain rings, you can get one to work depending on the chainring spacing, but probably not well.

So, while you could run a 4x12, it would be utterly useless for anyone who wants to ride.

i once ran a mountain tamer 'quad ring' on a Specialized Stumpjumper. My lowest gear was only 16", incredible for climbing, but not much else!. I did it 'because i could', and because the idea intrigued me. Bottom bracket length was standard Shimano, the tiny 18t maillard sprocket was really tight into the frame and, literally circled the bb shell. I was running Shimano XT thumbshifters at the time so you get a 'extra click' on front shifter, very handy!. It DID compromise the chainline quite badly, so much so that if you tried to run more than 3rd sprocket on the rear you risked jamming or snapping the chain. I would NEVER have lent this machine to anyone for this very reason. After a few months of running it i came to the realisation that i'd actually lost more than i'd gained!, i'd compromised the reliability of my transmission far too much, this gear was putting FAR too much torque through the back wheel, stressing the spokes and the freehub beyond what i was comfortable with, so off it came. My newer Stumpjumper FSR is running 22 32 42 chainrings with an 11 13 15 17 20 23 26 30 34 9 speed block, to me this transmission is damn near perfect, there is a ratio for every occasion, power or speed, and all of it silky smooth and fast.

I've had a bike with a quad front chainring. It was on a Raleigh Delmara MTB originally, and shifting was dreadful. It had to be friction shifting because the chainrings were slightly closer together than normal, packing 4 chainrings in the width of 3.5 based on normal spacing.

Closer-squeezed chainrings lead to chatter and rub whenever the chain was on a small rear cog and anything but the big chainring. I could never shift it by feel either, had to watch it change because of the narrowness of the good slot.

I moved it to a mule bike with much longer 550mm chainstays and shifting improved, but it was never great.

In addition it was a 26 small chainring and 48 tooth large, so that provided no more range than a normal triple chainring. 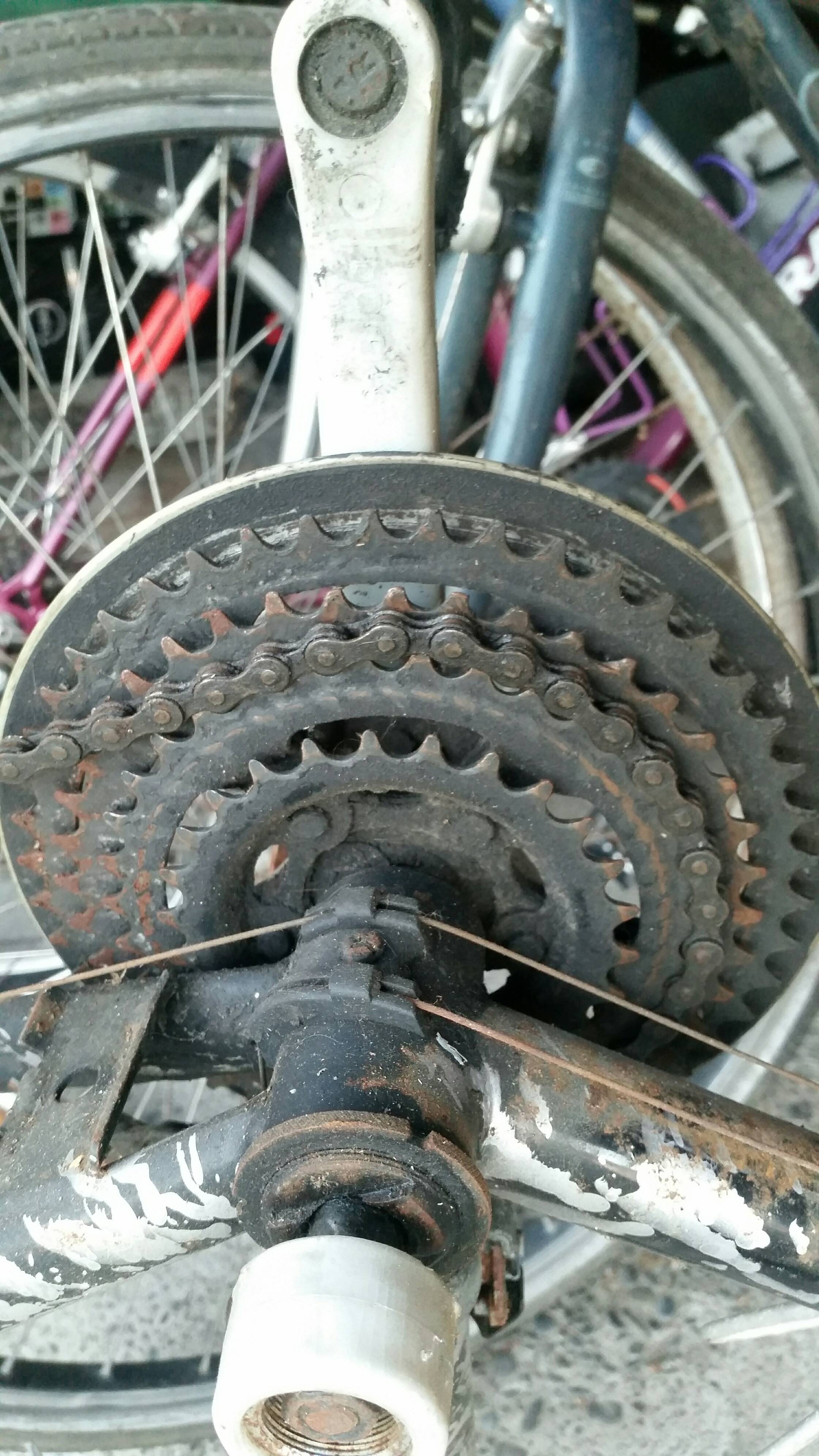 In short, nice idea but no real gain offered. Plus additional weight and finickyness.

Not the answer you're looking for? Browse other questions tagged gears cassette or ask your own question.

4
How do I change the granny gear on a cheap Walmart mountain bike?
0
Triple chainring + nonstandard sloped cogset. Can this work?
0
Sensible shifting on a triple chainring?
0
Issue shifting from largest cog to second largest