Any knowledge on LaFree Electric Bicycle? 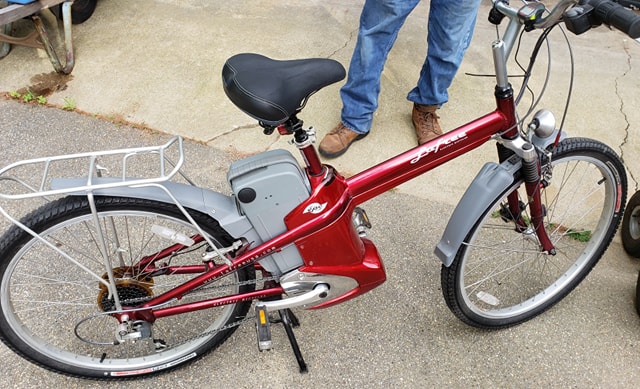 I have this LaFree Electric Bike, all I really know about it is that it was made by Giant.

I am an Electrical Engineering student and I am looking at bringing new life into it, would it be worth updating to more modern standards? Any information on this bike is greatly appreciated!

This is a Giant Lafree e-trans e-bike. They were made in three versions from 1999 on and yours is the Sport model.

It has two SLA batteries totalling 24 volts in the case. The roadster version I knew had the charger integrated in the bike so your's probably has too.

Start by pulling the battery and check its chemistry and state of charge. Googling suggests Sealed Lead Acid or possibly Nickel Metal-Hydride.

Give the bike parts a bike safety check, and probably replace the brake pads just because ebikes are heavy. There are plenty of google results out there for "lafree electric bike"

I just bought the same one at the flea market, I have the book, it has few stains on it ( the book ) I can scan it for you if you like I have the battery housing, but I don't have any batteries inside it, I would love to adapt a connector so I can slip couple of power tools batteries in there from Kobalt or Dewalt or others since I already use those on my tools and have the charger for them

I bought a Giant LaFree Lite bike new in late 2003, and pedaled it until I broke a transmission case at about 5000 miles (aluminum casting, weak design) wore out the internal hub gears inside the back rim (around 6000 miles) then the frame broke, down near the pedals/transmission, because aluminum is weak, and weaker near a weld. That was at just over 6,000 miles. I am 5'8", average build, so am no Goliath or Superman. The bikes were just built to last a few thousand miles, tops. Altogether, in the 15 months or so I rode it to stay in shape, I was in my mid-50s, and put over 8,000 miles on it, and the battery still worked good. It showed some signs of age, but was still at about 80-90%. It seemed like 100% though, because I had gotten so much stronger over that year-plus. I'm getting the battery rebuilt now, so I can get it out and ride it some more, now that I am old and retired. (turning 69 next month!)

Looks like a bike that will snap in two like a wishbone because it has no triangle between the seat post and front yoke. Aluminum frame, too, I bet.

Fenders were designed by an idiot, who does not know how water flings off a spinning tire.

Not the answer you're looking for? Browse other questions tagged identify-this-bike electric-bike giant or ask your own question.

11
What should I do to get an older bike into good condition
11
Hybrid electric bikes, how do they work?
3
How to convert a commuter CX bike to an Electric bike?
4
I bought a used 20 inch bmx bike from bike shop but no one has any idea of the brand
4
Need help identifying adult tricycle
1
What bike is this? Need to find derailleur hanger
0
Handlebar positioning and posture on Giant bikes
1
What is the model of my bike?
0
Help me identify this specific Giant XTC
2
Interesting frame, not sure what I got