I spent a lot of time trying to figure this out, so I thought I would post this to maybe save others the hassle.

The problem: Avid BB7 Calipers don't play nice with many of the popular Shimano Centerlock rotors.

(True, you can cut those little tabs off easily enough, but that doesn't fix the 2nd problem.)

There are two different issues here; firstly the rotor width, and then the rotor spider.

I have a spreadsheet of all Shimano's disc brakes (excluding the 1970s models) here:

Essentially the very first Shimano disc brake (post 1970s) in 1999 was made by Grimeca, and was part of the Deore XT M750 series; BR-M755. The Rotor was a six-bolt design called RT75. It was a hydraulic brake.

The next disc brake was the mechanical Deore M515, in 2000. I'm not really sure who made this, but it's a fairly generic design and uses pads that are used on Clarks and Tektro brakes. The same pads are still used on all low-end Shimano brakes today. This came out with RT50

Centerlock was first released in 2002 and was part of the XTR M960 series, hence RT96. There was now a Shimano-specific brake pad, which was narrower (in terms of how far they extend into the diameter of the rotor) than the generic ones used on the M515 etc. 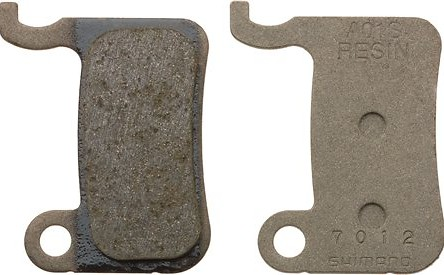 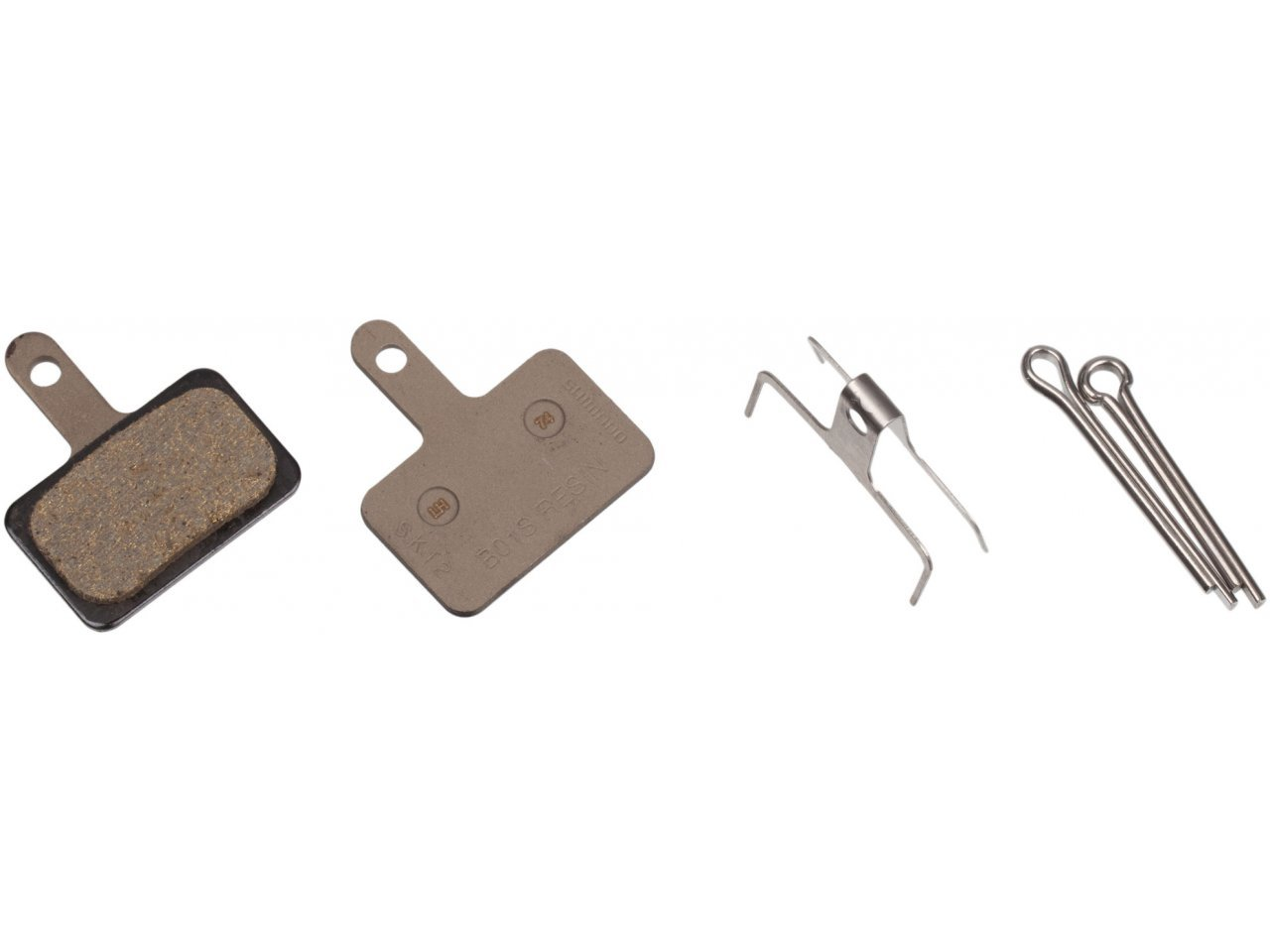 The rotor was still a fairly generic design: 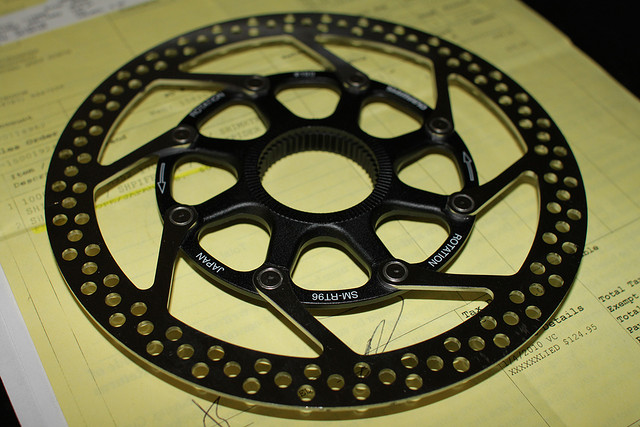 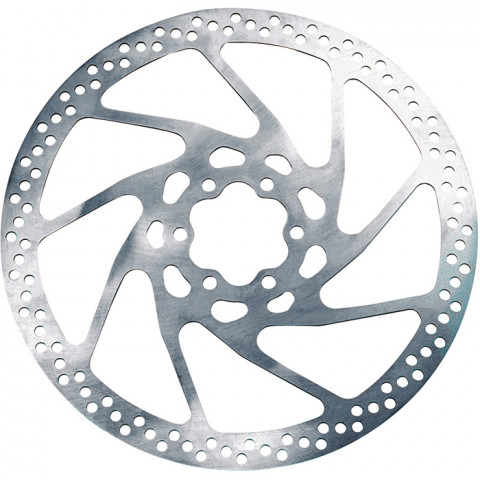 The real change came with the release of XTR M975, in 2006, and RT97. The pad design did not change, but now Shimano was ready to release rotors that only worked with their 'narrow' pads. (the narrow pad design above was changed in 2010, to add support for fins) 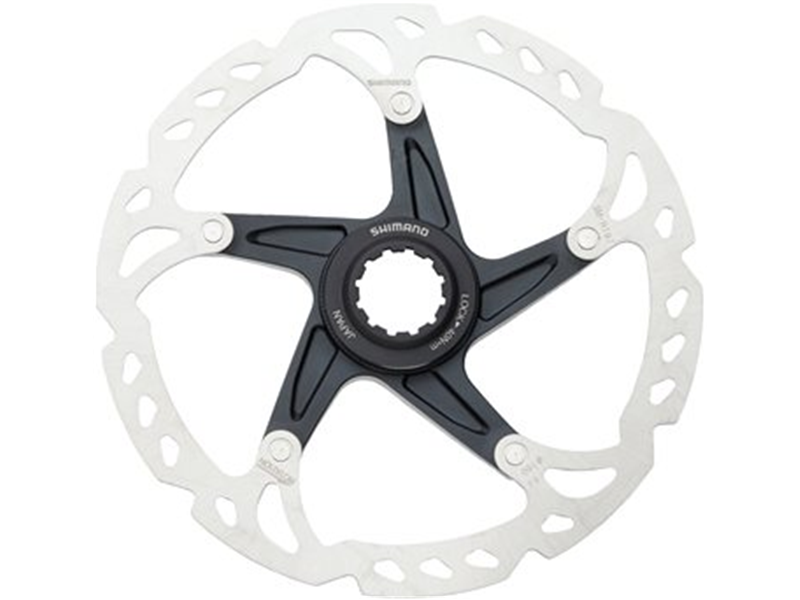 And since a 'narrow' pad was standard, Shimano could use less steel for their braking track, and more carbon fibre spider or whatever, saving 10g for XTR users but making everyone else's life more difficult: 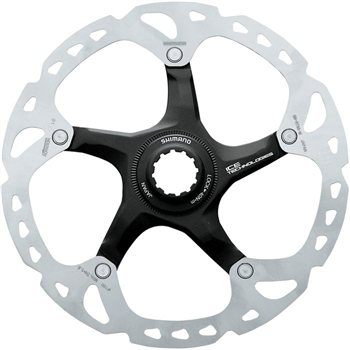 Anyway, since the early days Shimano insisted on making a cheap rotor out of non-hardened steel that would wear out quickly if used with sintered pads. The introduction of their new 'high-end narrow' vs 'low-end wide' rotors, pads, and calipers meant that they could eliminate the hardened rotors for the wide calipers. Hence the last such design was SM-RT63, released in 2005. All subsequent 'wide' rotors were non-hardened. 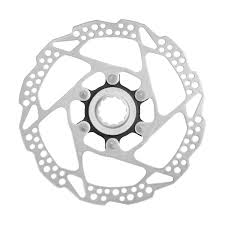 Then the braking track is 'wide'.

It seems to me that Shimano set out to create their own ecosystem, incompatible with anyone else's. The problem with SM-RT64 is that it might work with a given third-party brake given that it does not use any plastic parts near the braking surface, but given that the braking track is narrow, it might mean that the third party brake ends up doing something like this, but reversed (i.e. instead of the incomplete contact being on the outside of the rotor, you end up with it being on the inside of the rotor):

Other than seeking out old rotors such as RT63, it strikes me that Shimano's cheaper rotors (anything numbered below '60' essentially) work just fine, and they are quite cheap, albeit that they should wear out quickly if used with a sintered pad.

Alternatively there are a number of third party centerlock rotors , such as Jagwire, TRP, SRAM 'Centerline', etc.

What's needed is a Centerlock rotor with a spider small enough to clear the tabs as well as allow increased flexing of the rotor itself.

The simplest solution I've found is to use the Shimano SM-RT64 rotor, which has a smaller spider, flexes well enough, and is pretty inexpensive. It is also rated for metallic pads -- the standard with BB7s. 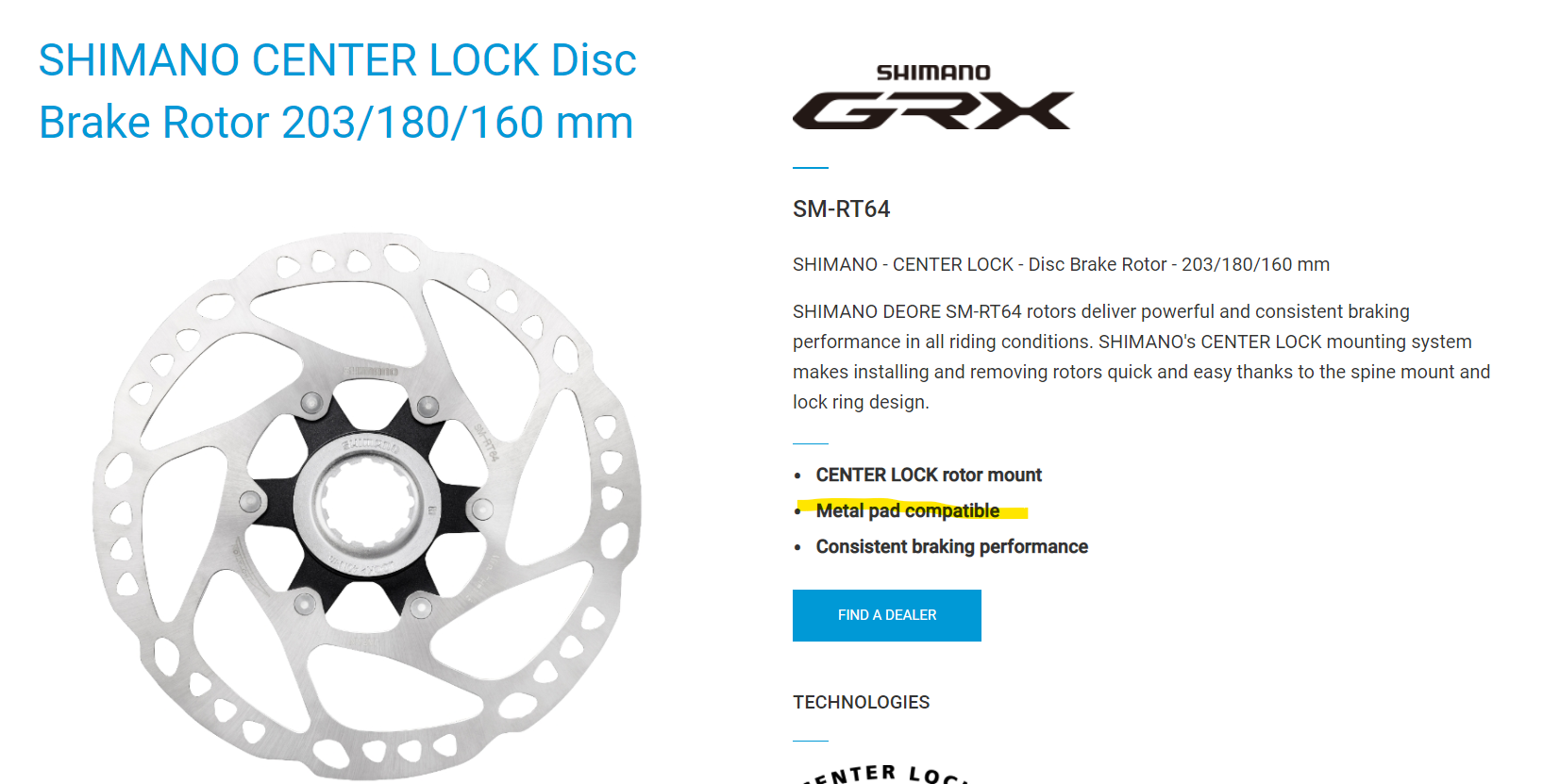 The SLX line SM RT-68 and SM RT-70 look like they'll also work, and they're also rated for metallic pads, but they cost about 2x. They weigh a bit less, so pick your priorities.

You could also look for Centerlock adapters (A Shimano one is available) to put a nice, flexy, ISO 6-screw rotor onto a Centerlock hub, but these adapters often cost as much as the SM RT-64 itself. I've read mixed reviews on their staying tight, etc., so I think forgoing the hassle and just buying a working rotor can be best.

A final alternative that solves both problems is to ditch the BB7s and go with TRP Spyres, which don't have the clearance issue, and they pinch the rotor from both sides. I actually did that on one bike, and the TRP calipers are nice, but they usually cost 2x BB7s. It's also a bit quicker to adjust a pad on a BB7 since you can use your fingers.

As noted in another answer, Centerline or TRP Centerlock rotors may work better and may fit the deep braking surface better. The depth of the Avid BB7 pads is enough to abrade the "leg" part of rotor in use, but this has not, to my knowledge, been a problem. (There's a thread here discussing it.)

This shows an SM RT-64 running with a BB7 caliper after about 3,000 miles, much of it pretty dirty. 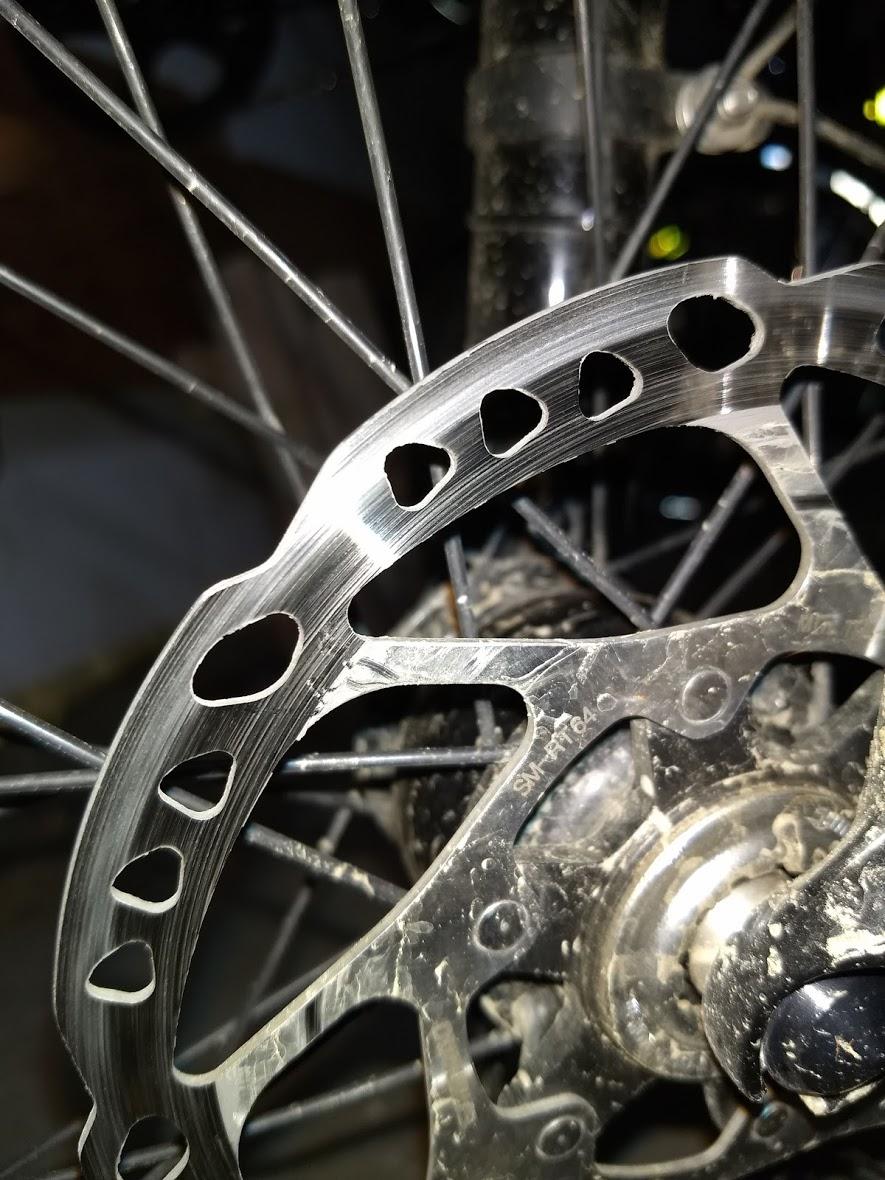 You might suspect I'm missing out on braking power, given the deep pads and shorter rotor surface, but it's always been fine, and this is a heavy touring bike handling heavy loads.

This bike runs the same combo, a lot fewer miles. 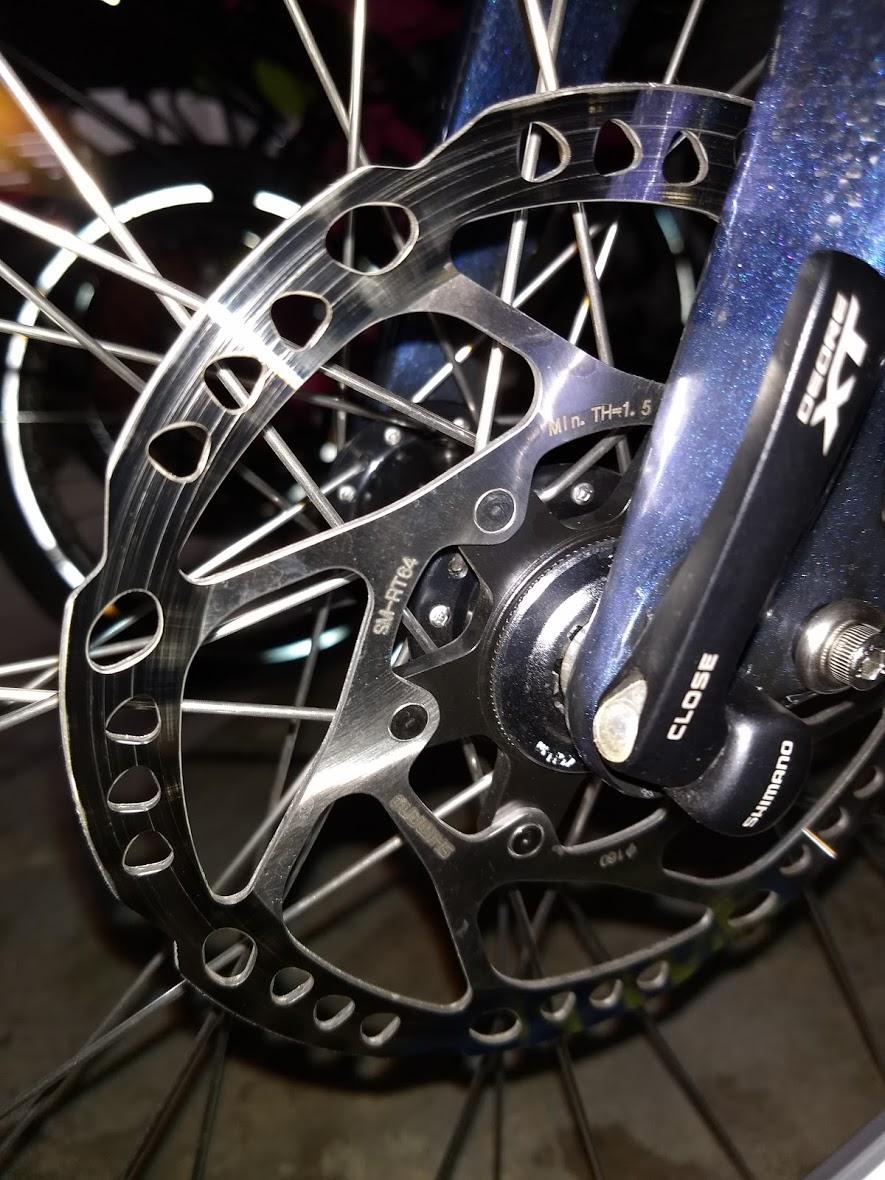 One could also space these a bit further out with a washer under the fixing screw / alignment assemblies, but I've never felt the need.

1
Brake pad too low on rotor?