I am planning to replace the cassette on my bike. Currently it has a Sunrace CSMS1-TAV 10 speed 11-34T. Unfortunately, this exact model seems that is not available anymore but very similar ones are available, such as CSMX0 or CSMS1-TAW. I wanted to ask if there is a compatibility problem between these ones. Looking at the information on Sunrace website I can see that some characteristics don't match.

First, the number of teeth I am pretty sure it's not a problem, the largest cog has more teeth but that will just affect the ratios and maybe require longer chain, but I just wanted to check that my thinking is correct.

Second, and what I am more concerned about since I don't really know what it means, it's the "Sprockets on spider" spec. What is this exactly? Also, will it cause a problem if it's not the same as the original cassette?

Thank you in advance for your help

They are all 10 speed cassettes, so have the same width.

The 11-36T will function identially to the original, the 11-34 will be slightly lighter but not offer the same low-low climbing gear.

As long as you match Speeds and freehub interface, other brands of cassette will work just as well.

If you have a look at the inside of your current cassette, it will have a structure that supports the larger sprockets, like this: 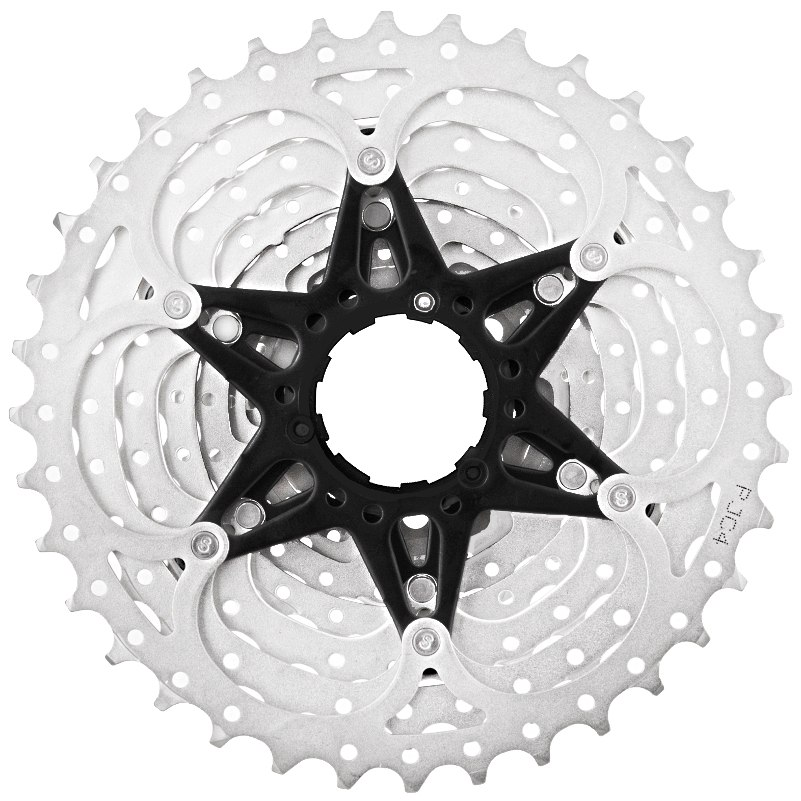 I think this picture shows "4 on 2" because there are two distinct black spiders, each of which holds a sprocket in front and another on the back.

The two spiders are rivetted/bolted together and to the smaller sprockets which tend to form an additional part (far side of photo) and then the lockring.

So 5 on 2 or 3 on 1 is merely describing the structure, which may have an implication on weight savings. It may facilitate replacing a single worn sprocket, but realistically noone does that any more.

There are cassettes cut from one monolithic block of metal, but they cost a lot more.

Historically, the spider is the part of the crankset that holds the chainrings with 3-5 chainring bolts or maybe rivets.

Differences between the CSMX0 and CSMS1 - the 0 has an aluminium spider, the 1 has a steel spider which weighs more but costs less. Functionally they're identical, but need separating at recycling time.

The 0 has "red anodised aluminium spacers" but the 1 has "engineering polymers" which means plastic. These are the small rings between each sprocket.

Honestly there's no significant difference, but the 1 is the "lower spec" cassette. This should be reflected in the price difference between the two.

2
Chain really quite stretched, should I change cassette at the same time?
4
Need easier gearing. What would the effect of changing the chainring or cassette be?
2
Loose cassette on road bike
6
Help me understand my 8-speed uniglide compatibility issue
3
Different size cassette for the trainer?
5
Need help replacing old cassette and chain
4
12 speed cassette touching spokes
14
Was I just sold a used cassette?
4
compatibility for a new cassette and chain
2
Replacement parts for old Giant CRS 4.0