I have this 2013(ish?) Vellum Uno on which I'm trying to replace my front derailleur cable. I was unable to do the yarn trick where you tie a piece of string to the cable before pulling it out (the entrance hole is too small for the yarn to fit).

The entrance hole is above the V on Vellum on the downtube, and the exit hole is on the seatpost tube between the D and the S on the REYNOLDS logo on the rear wheel.

When I'm trying to push the new cable through, it hits a hard stop at the bottom bracket.

Solutions I've tried with no luck: 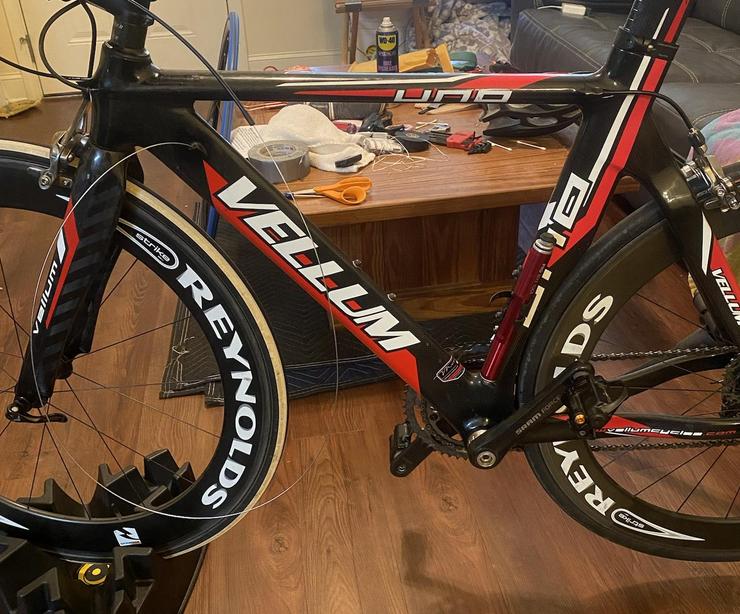 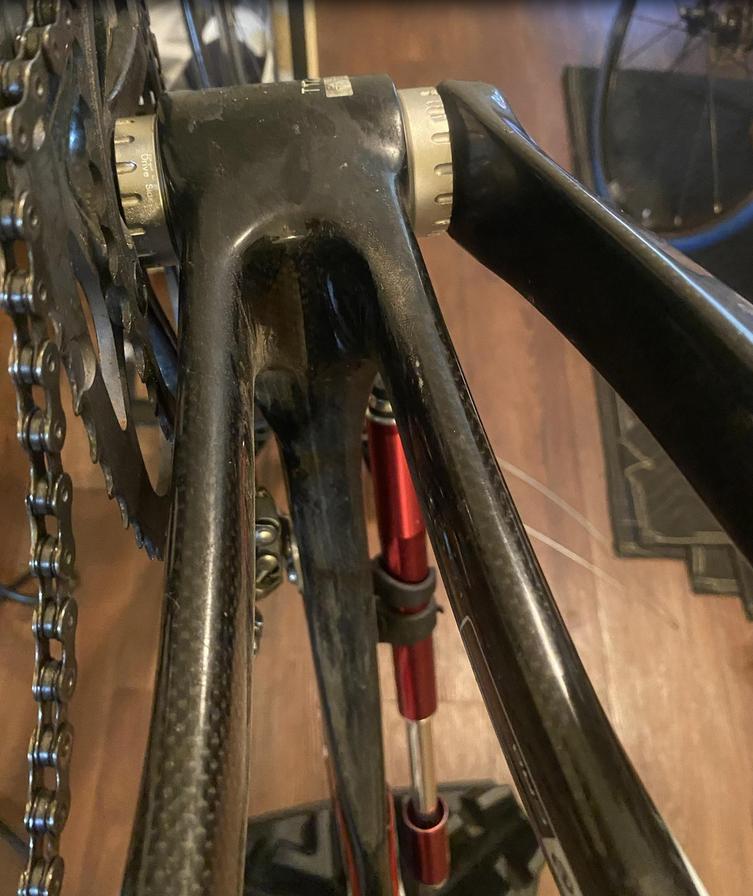 This is where the cable is supposed to exit. This is an image taken from the rear, with the rear wheel removed and the bike upside down. 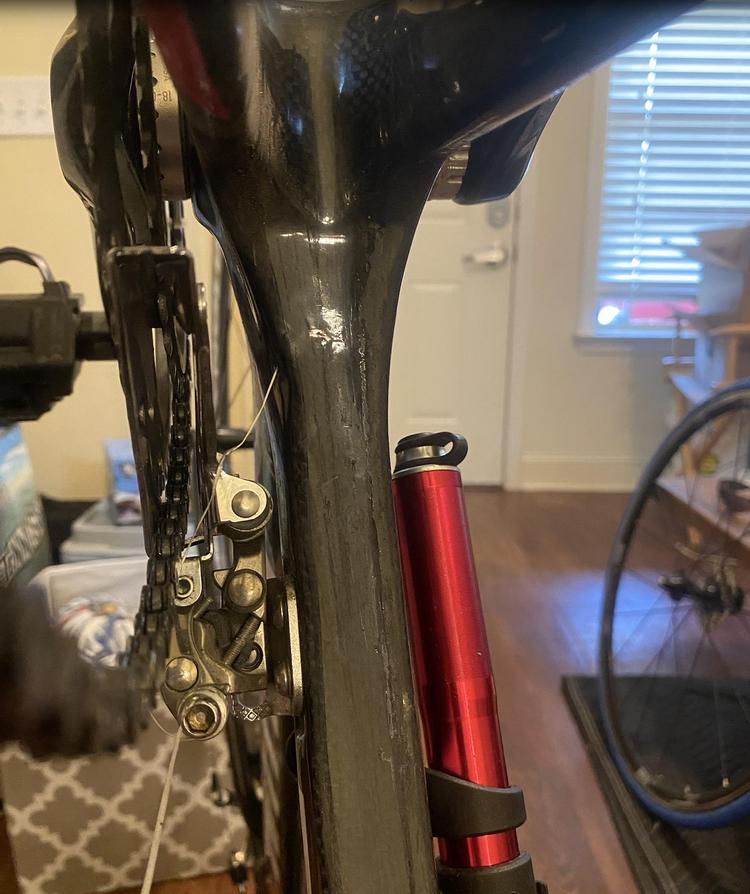 There are no ports or access holes around the bottom bracket that I could use. Are there any tricks I am missing? I cannot find any information about this frame anywhere online.

carbon cable cable-routing
Share
Improve this question
edited May 2 at 16:47
blackbrandt
asked May 2 at 15:26

Your first challenge is getting to a confident premise of what the cable is supposed to be wrapping around inside the frame to make its turn.

It won't be a bare carbon surface. It might be the underside of the aluminum tube that creates the BB shell. It's possible to imagine the manufacturer leaving that tube bare and smooth and simply intended for both cables to wrap around it, probably with a liner. More commonly there is some kind of guide or groove for the cables to sit in, but this is an unusual and probably older design so what's normal doesn't count for much.

The articulable magnet-tipped bits on the Birzman kit would likely be helpful with getting it out of the exit point. You poke one of them through and it picks up the tip of the cable as soon as it's in the vicinity. You could of course make something that does the same thing if you had a sufficiently teeny magnet. The magnet intended for guiding cables through the frame walls that comes with this kit is also very strong. 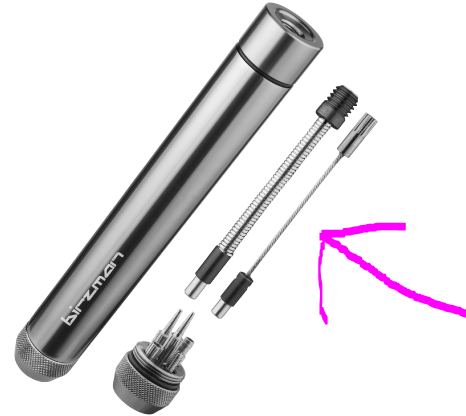 For getting the cable looped around wherever it needs to go and pointed back up towards the front derailleur, I think you need to contrive some way of doing it through the seatpost opening. It looks like a long length of straight 1/4", 7/32", or 5 or 6mm dowel or rod with a small magnet or maybe a hook stuck to the end could do it. Getting actual visibility of the area may be impractical; you might need to simply get the tool marked up so that you know the tip will be in the right place. Using something stiff like a dowel would help with this; doing it with a wire or cable seems like a recipe for frustration.

Make sure you have your liner situation thought out inside so that it works as intended the first time when you do get it through and start clamping it up. Again, unless there's some kind of smooth plastic surface built into something inside for the cable to wrap around and rub against, it probably needs a liner at the bend.

Also, this looks like the kind of frame where finesse and caution are the only things preventing the cables from getting overlapped or twisted around each other inside the downtube. There are some situations where the entry point for the cable really wants to shoot it through the other side of the tube, where your rear derailleur cable is. You need to be able to see or sense that the cable is going straight down the left side of the downtube where it belongs, and hasn't looped around. One way of doing that is guiding it down the inside of the tube with a magnet from the entry point on. If this part was troublesome, conceivably the inside of the head tube (with the fork out) could provide useful access. Don't leave the cables getting twisted around each other as an afterthought; there's nothing worse than having it come up after you thought you were finished.

Not the answer you're looking for? Browse other questions tagged carbon cable cable-routing or ask your own question.

11
Do I need to plug internal cable routing ports?
7
Internal cable routing blocked on '80s steel frame. What are my options?
9
How to install pre bled brakes with internally routed frame
6
Prevent internally-routed cable housing from vibrating against frame
2
Anyone seen a hollow crank spindle cut through by an internally-routed derailleur cable?
0
Externally routing cables on Trek Allant 7.4
4
Ultegra shifting issue
2
Shifting cable maintenance/swap with internal cabling on Cube nuroad
8
What does the cable sheathing on internally routed cables do?
2
A vibration with a loud grinding sound may start at speeds over 35hm/h on my 12-year-old carbon fibre road bicycle