How can I stop a belt brake (band brake) from squealing?

One of our bikes is an electric bike. It's an older iZip HG 1000, and although we got it through the American "manufacturer" (Currie Technologies), like most of the low-end ebikes it's made in China of heavy steel and uses cheap, cheap, cheap components.

The rear brake is called a belt brake or band brake. When I was researching this a bit, I came across a discussion that said this type of brake is something like 20 cents cheaper than V-Brakes to manufacture in bulk, which is why it shows up on this type of bike.

Here's a couple pics: just the brake and then one mounted on a bike (not our bike): 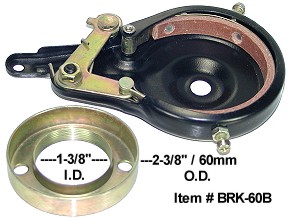 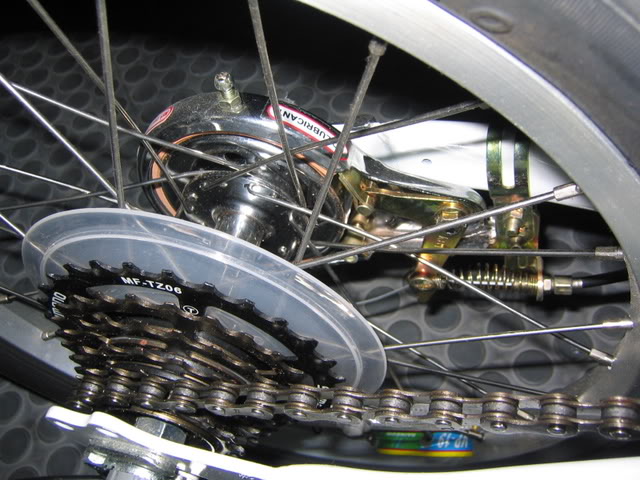 Actually, now that I look closely at the pictures, I can see part of why it's cheap - no special frame fittings needed. The donut-shaped "drum" mounts to the hub, the other piece just fits over that drum and is clamped to the seat stay.

My problem is that the thing squeals like a banshee. There's no pad adjustment as there would be for cantilevers, the only adjustment is how tight the belt starts. If I loosen it enough to stop the squealing, there's not enough pull to actually stop the bike.

Is there any adjustment I could do to get rid of the squealing?

That style of drum brake relies on friction between steel and leather. If it is setup to stop reasonably well, they will always make some noise. Quite often, when new, they do indeed howl like Baoine Sidhe.

This will get better with use. From the photos, it appears your brakes are fairly new? Assuming that they are actual photos of your bike...

Rubbing talcum powder into the leather strap will help quiet the brake, but it may also have an adverse effect on your braking performance. Best to let it work out naturally, with time and use.

The type of band-brake you have is manufactured in China. Hundreds of millions are manufactured and used effectively worldwide on numerous bicycles.

Your model of band-brake has 3 common causes for noise.

1)The spacing of brake-drum and belt-housing is too close. This can be caused by the wrong thickness of spacing washer being installed on the axle causing the outer edge of the drum rubbing on the inside of the band-housing. This situation can be easily detected by wear marks on the inside of the band-housing when disassembled. 2)The chain stay mounting or brake cable mounting is out of alignment and causing the the same effect between the drum and and band-housing.
3)The band itself is off centre when in the released position. This sounds like your problem, as you indicate that when you loosen the brake adjustment, the noise stops. The two screws on the outer edge of the band-housing adjusts this. You need to loosen the lock nuts on each adjusting-screw and adjust each screw inward or outward to provide a uniform gap between band and drum. Happy biking.

I have no experience with this drum set up but with similar industrial applications centering the brake band is critical.I would measure from the inner brake surface to the inside of the housing.Do this at several points.If it is off center one side makes contact and the otherside vibrates causeing the noise.Cleaning of the drum surface is important,try alcohol.If the brake material is leather Idont know what to clean it with.If it an organic material sand lightly with medium sand paper.

If there are no V-brake stanchions it is possible to retrofit V-brakes if you use an adapter (you can search for these on Google).

The adapters are normally intended for BMX bikes but I have successfully used on on the rear for a bamboo bike I built.

Not the answer you're looking for? Browse other questions tagged brakes adjustment or ask your own question.

4
What electric bikes are for sale in the US, and how good are they?

43
How do I make my rim brakes stop squealing?
15
Are road brakes designed not to brake too much?
2
My bike brakes are lethal, help!
2
Why does my cantilever brake squeal *nearly* all the time
4
How to improve band brake?
5
Stopping power of mountain vs road bike
1
How to adjust rear brakes on this bicycle?
9
Most effective way to improve cantilever brakes
4
Brake pads keep getting contaminated - how to diagnose?