I have had this question for a while. I want to know how I can get down a hill as fast as I can. So, I was wondering if increasing the weight of a bike increases the speed on downhill stretches, or will it just slow me down because of rolling resistance, drag or other factors?

I am talking long stretches here, and long, 10-30% hills. I have also checked the road surface, and there are no bends, and I can easily see if traffic comes along. It is very rarely used for traffic anyway.

The main thing you have to consider at speed is drag: The force F on you+bike (mass m) is:

where a is your acceleration, g is the acceleration due to gravity and Q is the hill angle to the horizontal. F_d is the drag force which doesn't scale with mass. Try dropping a balloon and a (soccer) football of the same size and you'll see this in action. F_rr is the rolling resistance.

Weight will have a small effect on rolling resistance and (assuming it doesn't affect the cross-section) none on drag so it will make you accelerate faster but not by much.

You might want to experiment: start with some measured speeds with no extra load, then test the extra mass, and a dummy load of the same volume/shape/mounting made of polystyrene or cardboard.

The biggest effect you'll have is on the drag - so the first thing to try is a better tuck, not wearing flappy clothes, etc.

For really high speeds a fairing is the way to go - compare the hour record for a fully faired recumbant (~92km) with a UCI racing bike (~52km). There are no stats I can find specifically for an upright with a fairing.

This may be half-remembered physics coming into play here, but I've raced (substantially heavier) friends down hills where they've been on bikes which should - be all accounts - be slower than my own, yet they've won. Could momentum come into play over rougher terrain? By that, I mean if a rider carrying a heavier weight were to hit a bump, or hole etc, they would experience less deceleration due to their increased momentum compared to a rider with a lighter weight.

In a perfect vacuum, of course, acceleration remains at 9.81 m/s/s and, as such, mass would have no impact on velocity.

If there were friction it'd be the exact same (remember the hammer and feather on the moon deal). However - your net drag isn't really going to be proportional to your mass. The air resistance isn't proportional at all to your mass (although the rolling drag is). Due to this, you'll have less drag per kilogram with more weight which will cause you to go faster, yes.

The accepted answer states drag does not scale with mass. Which is true. But drag does scale with frontal area. It is fair to assume the two frames are made of the same material therefore the larger frame has a larger frontal area.

Rather than compare balloon and soccer ball of the same size a more appropriate comparison is two rocks of the same density but different sizes.

Even climbing bikes are designed to be light.
Basically up the hill you pay for all the weight and down the hill you only get credit for the square root of the weight.
Drag proportional to v squared is the real drag

The short answer is yes. See Chris's post for the long answer.

The main reason for this "answer" is to encourage great caution.

As a teenager (in the previous millennium), I grew up in hilly area. There were two descents we used to do regularly - a two mile run from my friends farm to home, and a steep hill of one mile. My best time to get home was 2:11, with lots of pedaling (I wont mention passing the cars). On the steep hill we would crack 1 minute with no pedaling. The point is we were young and stupid.

Recently, my brother met some similar aged kids, who were keen on descending a serious hill we know, as fast as possible. Although he advised against it, they did it anyway. One crashed and smashed his skull. From our own experience on that hill, he would have been doing about 60kph. Only. 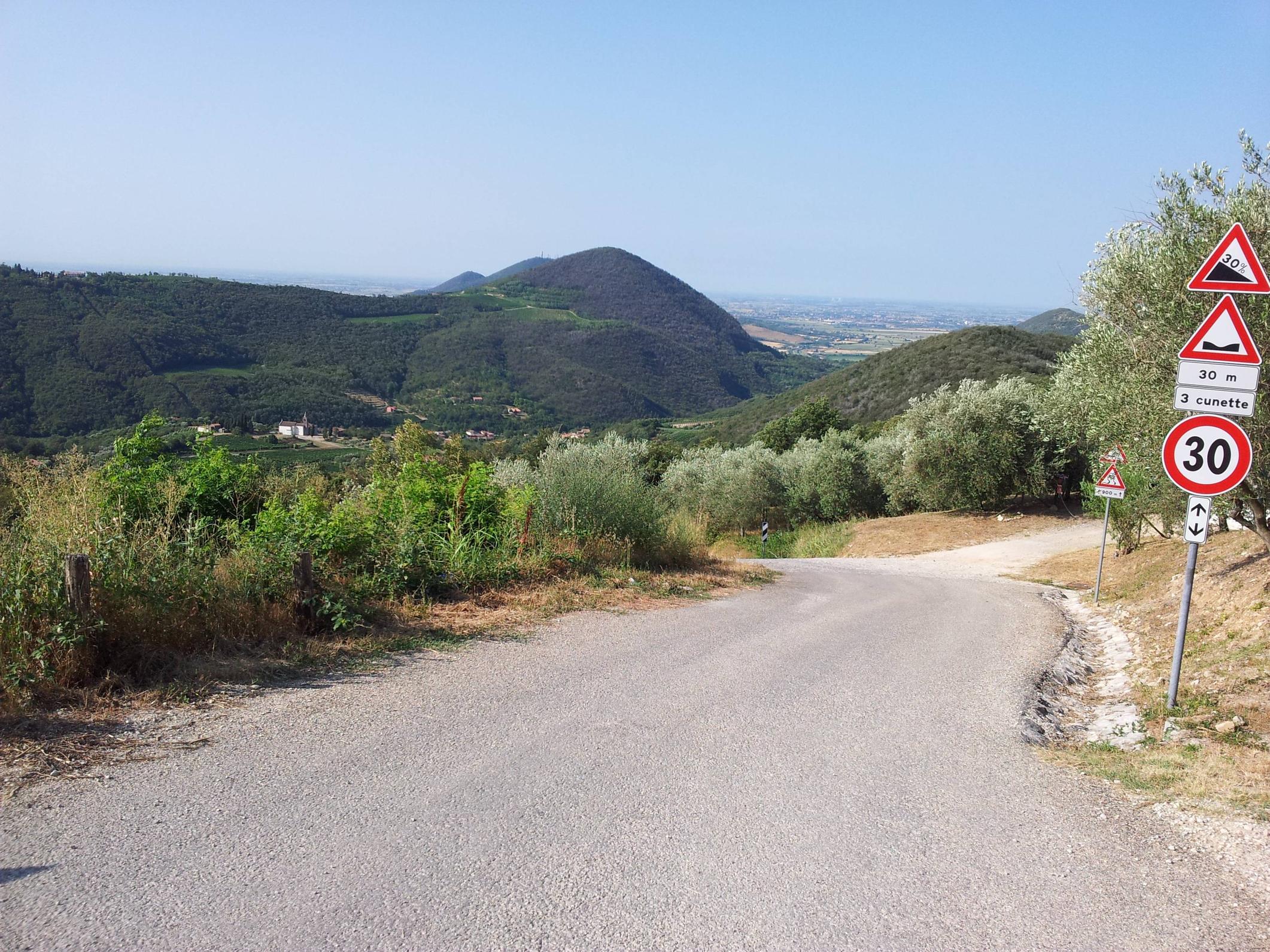 The steep part is where the road drops out of sight.

The final cautionary point is bike stability and brakes. Bike brakes are not designed for those speeds. And your frame geometry is an unknown factor - will it "get the wobbles"? The only way of you knowing is to do it. Problem is, if it does you'll most likely crash. Hard.

However that is a fairly massive increase in weight. Increasing your body weight that much would be "unhealthy", and increasing the bike weight would very likely negatively influence handling..

Smaller increases in weight (a few kilograms etc) will increase your speed downhill somewhat.. but it would probably be far more productive to work on reducing aerodynamic drag.

An extreme example would be a recumbent bicycle (much smaller frontal area than a typical road bike, and can have an outer shell to further reduce drag), however there are plenty of other ways to do this, like adopting rather unsafe positions on the bike, or wearing funny shaped helmets and more aerodynamic clothing (triathlon/timetrial skinsuits)

Yes in some sense. It's like some skiers try to get more weight in order to get extra velocity. But it would hard to have a good control compare to when you were lighter before :)

As usual, I think the best way to consider this is through energy;

in moving from rest at the top of a hill (height h), the conservation of energy applies between potential energy at the top and kinetic at the bottom:

as losses are not proportional to mass, then factoring them down by mass reduces their influence on speed for the heavier rider, regardless of whether terminal velocity has been reached or not

Not the answer you're looking for? Browse other questions tagged speed weight downhill or ask your own question.

20
How does a bike's weight affect the overall experience of owning it?
20
How can one estimate drag for a bicycle?

9
How much faster will I be if I lose 10kg (from 100kg, all else equal)
10
How does weight influence your speed when descending?
11
How to brake without falling during wet weather?
8
Is there a limit to safe downhill speed on a bike
6
How much does wind affect the speed of a professional cycling peloton?
12
How to decelerate during long downhill rides and avoid brake glazing
7
How safe is v-brake system with handbrake and coaster brake for child going downhill?