How does the SureStop braking system work?

There's a new braking system put out by a company named SureStop that controls both front and rear cantilever (side-pull) brake systems with a single brake lever. They seem to be mainly appealing to the safety / children / new bike owner's market.

They say their technology can prevent end-overs as well as skid-outs.

How do they do this? It appears to be more complex than a dual-cable brake lever -- i.e., there seems to be some fore-aft balancing magic that's going on.

Bonus question: If the rear pad loses traction against the wheel (for example: it wears down to its nubbins, slips off the rim, or the rear brake cable breaks), does the user lose all braking - front and rear? Does this then violate the redundant brake regulation in bicycle consumer sales laws?

For example, Japan's JIS 9301:2010 regulations requires "separate braking systems operating on the front and rear wheels respectively" and SureStop says that they are compliant with this standard. Because the front and rear brakes are linked in SureStop, it's unclear to me how they are "separate." 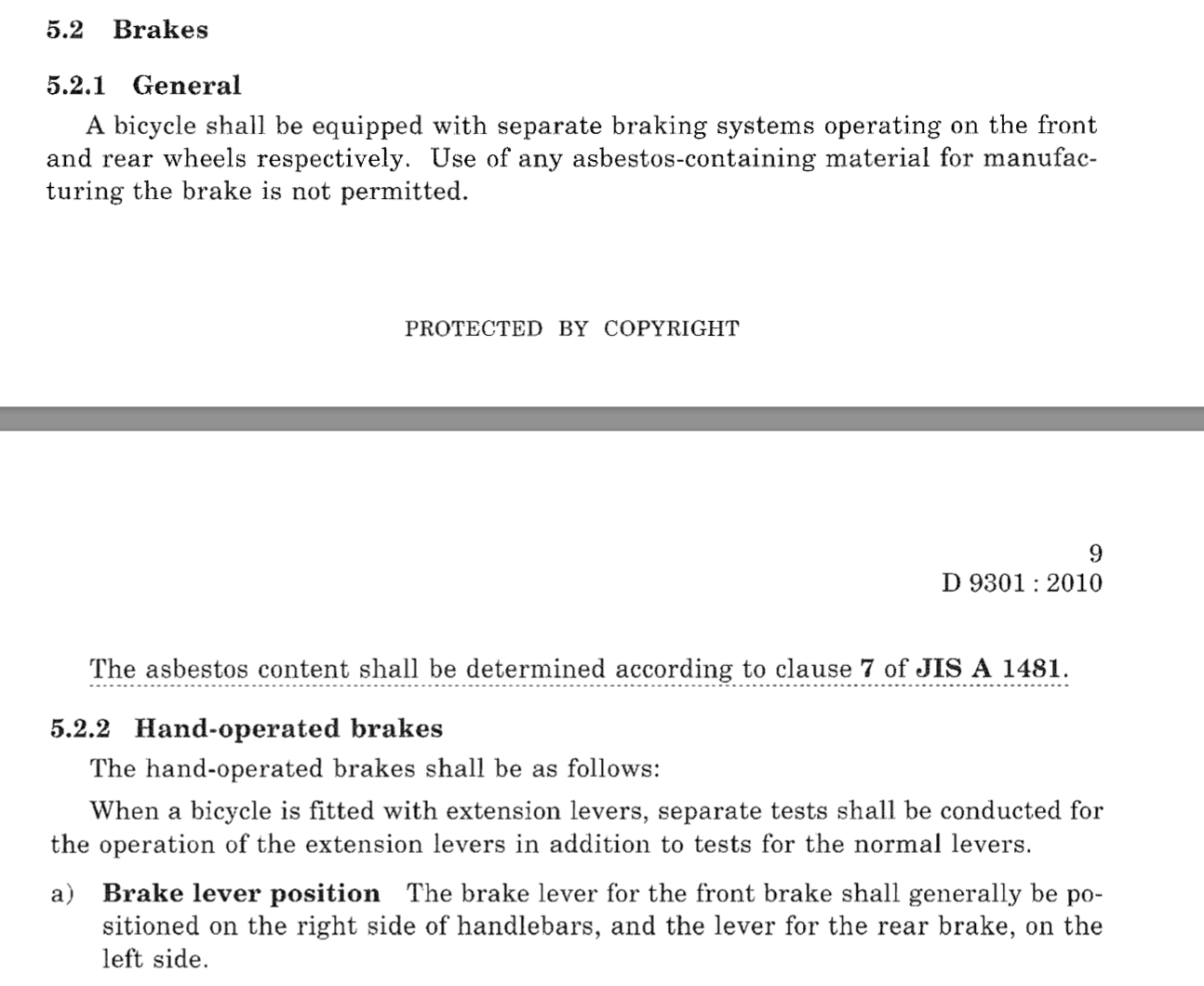 You've got a brake lever and a rear brake both with typical mechanical advantage characteristics. One of the rear pads has a spring-loaded sliding mechanism where forward momentum captured from the back wheel when braking causes it to slide forward and actuate a cable going to the front brake, which is controlled only in this manner. (The head of the cable is in the moving pad, and the stop for its housing is a stationary part of the pad. Movement between the two generates the cable movement, same as a brake lever.) Some assumptions are built-in about weight distribution and total weight on the bike, and the manufacturer chose a distance for the slidey bit that will keep the front brake from ever being able to lock if those assumptions are correct.

Maximum braking power is decreased compared to a normal system owing to the aforementioned one-size-fits-all design assumptions, which have to be conservative for the system to do its thing, which in the scheme of things probably makes them less safe for most people, not more. They are adequately powerful for most purposes when set up correctly. Their marketing/product material touts the line that they're a pure, unequivocal upgrade over conventional systems, which is not correct because they reduce the overall amount of braking power available.

Another safety drawback, especially for novice or fearful users that might be most drawn to the system, is that not adjusting the rear brake's barrel adjuster as the rear pads wear will create a situation where the entire bike has inadequate or no brakes much faster than in a conventional two-lever setup. For a rider that simply will never use their barrel adjusters, SureStop is much more dangerous. Compounding the issue is that the front brake has its own adjuster, but using it properly is a little more complex than normal (see their videos for more explanation.)

Another way of looking at how it works and the effect on power is that you've got a normal rear brake you can set up and use however you want, and for your front brake someone put an arbitrarily sized block of material between the lever and the bar so the lever will always bottom out against it at a certain point in its travel.

Any loss of grip between the rear pads and rim, or any mechanical failure of the rear brake, will keep the front brake from operating, rendering the bike brakeless. In other words, the system eliminates one of the key safety features of other bikes with two brakes: redundancy in case of mechanical issues, especially in emergency braking situations where cable systems in particular are stressed the most.

A theoretical advantage of this kind of system is for one-handed users, especially if the one braking hand available has compromised strength. Unlike split levers, they don't have the drawback that they're dividing one hand's braking force between two different brakes, since they're making use of otherwise-wasted energy to actuate the front brake.

The idea is to stop out the front crashes. The company used to be called Slidepad.

It mounts to conventional V post. I think you could even use a regular V brake in the front.

It certainly has a purpose and is not a gimmick but I feel like it is over advertised. They state as effective as dual braking but it does not transfer optimal braking to the front wheel. On Shark Tank they said brands are afraid to put them on any bikes as then people would ask why are you using unsafe brakes on other bikes? They certainly did not share that independent brakes are required in many countries.

The company has been around since 2009. They did not get much traction as a component and formed a child safety bicycle Gardian for both revenue and to prove out the product.

Any experienced rider would prefer independent control. On a steep downhill need to use the front brake.

Sometimes you only want to use the rear for just light braking. The front comes on and gives you more braking than you want for that situation.

Based on these images from http://surestop.bike/ 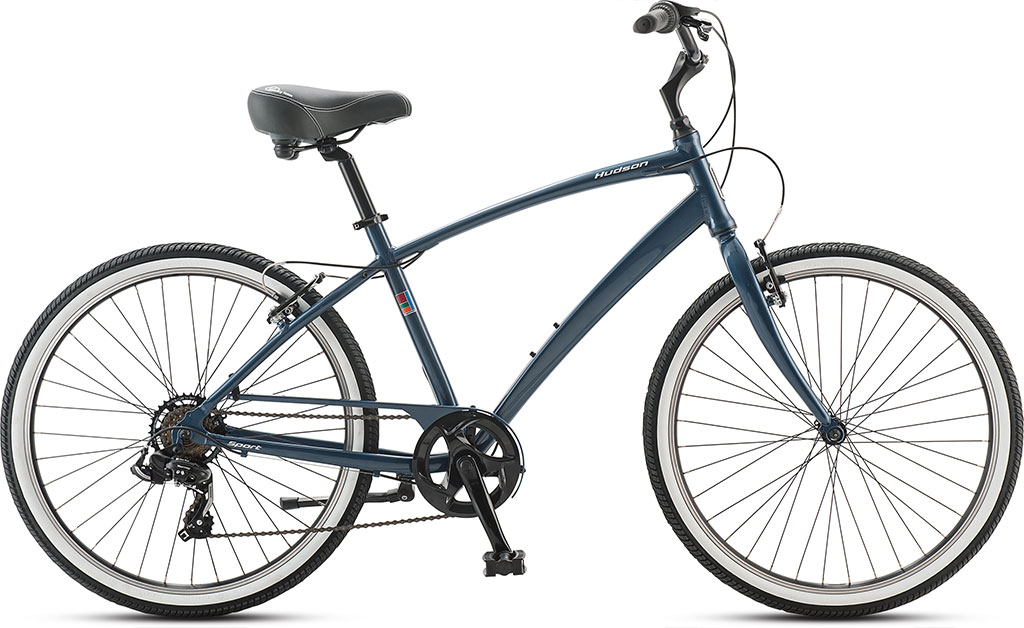 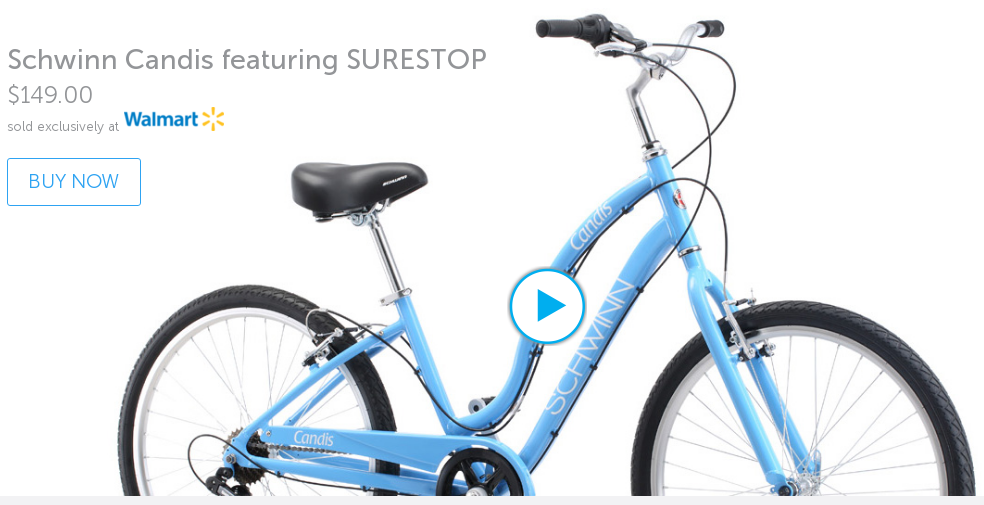 We can see clearly:

So I surmise (And some of this may be wrong)

The inner brake cable could simply be super long and run all the way through the entire system and be terminated at the front brake, but that's too simple. I suspect there's some secret sauce in the rear brake that moderates the cable tension to the front brake, but their website photos don't show that area of the bike.

If you disagree with any part of this answer, please make comments.

The question of HOW the system works to prevent head-over accidents is quite simply answered:

When one brakes hard with the front wheel the momentum of the rider will tend to tip the bike forward, lifting the rear wheel. Even before the rear wheel lifts completely, it will lose traction and begin to skid. The rear wheel stops turning and the front brake is released (or at least moderated, in situations where traction is not completely lost).

The effect would be very much like ABS braking on an automobile, and the classical panic stop head-over accident would be essentially impossible. (Of course, one could still hit something or fall into a hole and go head-over, but such a scenario has nothing to do with brakes.)

Skid-outs are a hair more complicated, and likely the effect would only be significant in certain scenarios -- mainly those on dry pavement where the problem was over-braking on the front, vs scenarios where the pavement condition was a large factor.

(But I get the impression that the real intent of the question, or at least of the responses, is to beat up on this idea rather than attempt to understand it.)

I've got the James Hudson. I came up to a busy corner, hit the brakes and kept right on going. I agree with these people that are saying these aren't what they're cracked up to be. I'm thinking of having them switched out to conventional breaks. I do appreciate the Endo protection because I have done that before, but it's not worth risking my life ending up in the middle of traffic. The bike is at the shop now with the certified dealer. He had them set so close to the rim that I had to totally deflate the tire to take the wheel off. So much for quick release! I couldn't even get the noodle to unhook. In concept it seems like a good idea, but the reality is when they fail, you're screwed.

69
Do skilled cyclists really "use the front brake alone probably 95% of the time"?
30
Why do the front and rear brakes work independently?
24
Bicycle designed for one-arm usage?
4
Rear brakes wear quickly - do I need redundant rear brakes?

5
What alters the efficiency of (cantilever) brakes?
0
How to decelerate effectively with a rear brake?
2
Mechanical cable-actuated disc brakes started working really badly
4
Are my cable disc brakes knackered?
7
What did I just do? Fluid shot out of my handlebar when pushing my caliper in
5
Brakes won't release after being applied?
3
Rear brake cable temporary fix possible?
3
Missing bolt in my brakes, how can I find a replacement?