What are the pros and cons of front and rear suspension?

I'm buying a bike for delivery in the suburbs, I need to go over grass/dirt/sidewalks, and sometimes drop down over the kerb back onto the road, and it will be sunny most of the time but I also need to be able to ride in the rain.

I'm trying to decide whether I need front/rear suspension or both, but I can't understand how to decide and what the differences are.

Also, what's the difference between front and rear suspension? And how do I decide whether I want 1 or the other or both? If I want 1 do I always want both?

Specific answers to your questions:

Yes, for two reasons. Suspension causes bob, where some of your pedal power goes into flexing the suspension with each pedal stroke. That power does not spring back out and help you, it is lost. This can be helped if your suspension has a lockout function, which is like an off-switch.

The other loss is that suspension adds weight to the bike, so you're moving a couple kilos of metal and oil all the time. Less important on the flat, but still there.

Does it reduce max speed?

But no, smaller amounts of added weight generally don't have a lot of effect on the top speed, all other things consistent.

Does it reduce braking power?

Yes. The added mass means you have more bike to stop, and physics says you'll take longer to stop an increased mass.

Also front suspension loads up when braking, helping to move the bike's weight forward and making the back wheel brake even less useful.

Additionally, suspension loaded under braking can have some unexpected side effects if you're not expecting them. Loaded brakes will unload as soon as the bike's momentum is stopped, and it will push your bars upwards. If you're not steering straight, then things get all additive-vectory and you get pushed to the outside of your turn. This is fine if you're expecting it, but potentially dangerous if you forget or didn't anticipate.

For a paper route or similar, you'll be going slow and stopping at most mailboxes. You want a bike with

ANSWER You want either a BMX or a 90's style rigid MTB, with strong front and rear racks, and mudguards to keep it cleaner. (but not the knobbly tyres in the photo) 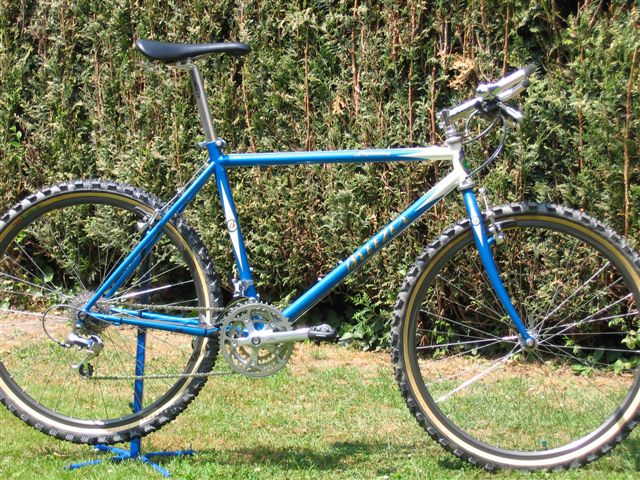 Even if you're regularly riding up and down kerbs you don't need rear suspension. If you did, people wouldn't ride hardtail mountain bikes on the trails, where drop-offs considerably higher than kerbs are normal, as are step-ups. And even with my limited skill that's all possible on a hardtail (nothing massive). Suspension forks add weight, and this will reduce your acceleration. If the forks bob up and down as you pedal this steals pedalling effort, so reduces max speed.

So the question becomes one of whether you need front suspension There's no doubt that it makes kerbs etc. more comfortable, and it can save wear on the bike, but even so you should drop off kerbs properly. Proper technique is weight on your feet not your saddle, and weight over the wheel that's on the flat, so weight back as the front wheel drops, then forwards as the back wheel drops. The same applies as you go up, but lift the front wheel as well.

I'm happy to ride off kerbs on my hybrid or tourer (neither of which has suspension) if it's appropriate, but tend to choose an alternative where there is one. So I suggest that front suspension will mainly add weight and is something else to go wrong. Delivery riding is hard on the bike, and you want to be able to rely on it. I assume you're on a budget; if nothing else, an expensive bike is more likely to get stolen.

Reasonably wide tyres will help, especially if you don't go for suspension. If you're mainly riding on decent surfaces you don't want much tread. There are plenty of tyres with tread on the shoulders (for the occasional muddy bit of grass) but smooth on the centreline, with puncture protection as well (highly recommended). You need to make sure the frame/forks can take a decent width (40mm or 1.75" ± a bit). A good choice of tyre makes a big difference to speed.

TL;DR: I suggest avoiding suspension in this case. A suitable bike should be quite easy to find used (which will give you much better value, but it may well need a service almost immediately).

You definitely don't need rear suspension: that's for serious off-road riding. For riding on the road and the very mild hardly-off-road-at-all riding you're proposing, rear suspension just adds a lot of weight and it flexes as you pedal, which uses up some of your power. Also, it's a complex system that gives you about five more things to go wrong on the bike you're trying to make your living with. Your profile says you're in San Francisco: you do not want to be lugging a full-suspension bike up those hills. Good rear suspension systems are very expensive: the systems fitted to lower-end bikes are not good.

I would advise against front suspension. It does help smooth rough roads but it comes with the same disadvantages as rear suspension, albeit to a much smaller extent. It's perfectly possible to drop off kerbs without damaging your bike, as long as you go slowly and use your body to cushion the impact: lift your ass off the saddle and bend your knees and elbows to act as your own suspension.

Definitely get mudguards. Don't get super-knobbly tyres because that buzzing noise they make on the tarmac is the sound of angry bees stealing your power. But you probably don't want completely slick tyres since you won't be on the road all the time.

Final recommendation: talk to a bike shop. They'll be able to give you more detailed advice about your specific situation, not least because you can have an interactive conversation with them, whereas we have to just read your question and write a few paragraphs of text. They'll also be able to do some customization for you, such as fitting a stronger rear wheel with more spokes, to better cope with the extra load and the fact that you have a job to do so you don't want to spend all day mothering your bike.

Double-final recommendation: don't buy the cheapest bike you think you can get away with. I'd aim to spend at least twice the minimum, to get something that's nicer to ride (you'll be on it all day) and more reliable (so you can be on it all day).

For delivery in the suburbs I think you won't need a mountainbike as you want something fast for the deliveries. This basically narrows down the question further as most quality bikes for trekking/communting etc. are not build with a rear suspension. Also dropping down the kerb should be something which is absorbed with the body.

So we are now to decide if you need front suspension. I don't think it will slow you down as the front suspension doesn't have such a big impact on the terrain you are riding. Another thing to consider is how you gonna transport the deliveries. Are they transported in a backpack or on a back or front rack. If the latter is the case and you want to use a front rack the front suspension is out of the question as the typical forks are not made to be used with a front rack ( you just can't mount them ) In case of a backpack you are good with a suspension fork most likely your hands will be glad you buy one.

But what you should consider ultimatly is how much you gonna spend on the bike. If it will be a cheaper bike I would consider buying a bike without a suspension fork as those tend to be pretty crappy. With crappy I mean poor quality of dampinig and high weight so you are better of with a stiff fork. Also if you are doing deliveries your mileage will probably a bit higher so lesser parts which will break are better.

While the points "price tag" and "weight" already mentioned here, you might want to take the point about loosing pedalling power with a grain of salt. I rode many miles on a (hybrid) bike with front suspension and it does not "bob up and down with every pedal stroke". Besides being silly, you would be hard pressed to convince anyone using such bicycles on pavement if that were the case. Maybe you can get this effect with mis-adjusting a suspension fork (insufficient preload, too weak spring), but these are issues fixed quickly.

While braking, the suspension fork also does not generate any lift in the back of your bike. Conversely, it forms a "point of junction" that keeps more weight on the back wheel for longer. If (and that's a big if) you get brakes that you can actuate sufficiently that you would get thrown over the handlebars, that is if braking efficiency is limited by the friction tyre-ground, then (front) suspension actually helps braking.

Getting one for going up and down curbs misses the point, replace it by riding technique. A suspension fork "in the city" is nice when going over cobblestones a lot or facing very unmaintained, rough bike paths. It still is heavy and expensive, though, so choose carefully.

Edit: A point that hasn't come up here enough is maintenance. If you are not as bike avid (yet), you are probably going for a more utilitarian approach. You might like to pick a bike that needs as little maintenance as possible to save your time. That probably means internal hub gearing and as few parts that need frequent attention as possible, in particular no suspensions.