On a 10 year old bike I am trying to replace miniature frame pivot bearings which measure 9mm x 17mm x 4mm, pictured below, and are sealed with 689z stamped on. They must measure the same dimensions to fit in the frame... but I cannot find sealed bearings which are 4mm wide, they are only 4mm as 'open' bearings, those with seals are listed everywhere as 5mm wide, no good.

It's left me rather confused, I definitely have seals and have checked the 4mm measurement.

So how about open bearings for mountain bike use? they are right at the back end of the frame at the rear dropout with a nice 1mmish clearance for dirt to get through. I have assumed so far that open bearings are a no-no for frame pivots, but cannot find anything else from a range of national suppliers. Just how bad would it be to use open bearings as mtb pivots? 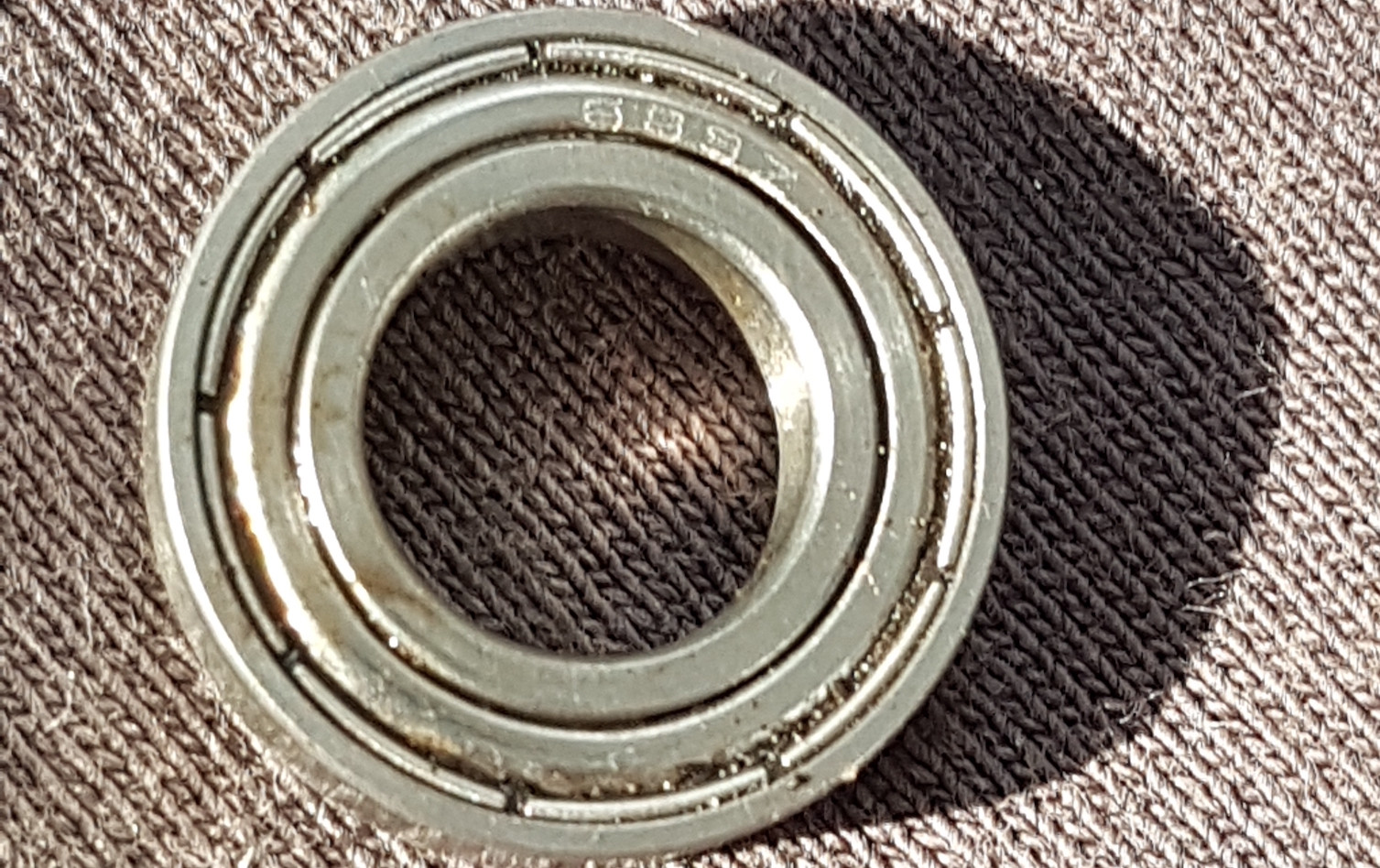 I can only speak somewhat objectively to the bearing size. I believe that 689 is the complete specification for the bearing size. This appears to be a 9mm inner race, 17mm outer race, 5mm deep size. (NB: Swifty measured his current bearings at 4mm deep with calipers, not 5mm). Adding a Z suffix appear to pull up a lot of bearings with non-contact shields (i.e. they're not full seals; "ZZ" is sometimes used as a suffix to denote non-contact shields) like the bearing shown above.

Searching for "689 bearing" appears to pull up a multitude of bearing types, some of which have 2 rubber seals (you may see a "2RS" suffix here), but all of which appear to be 5mm deep (i.e. wrong dimensions for Swifty). This listing from Boca Bearings is one example. Another example is this listing from RC bearings.

Searching for "9x17x4 bearing" brings up a more relevant set of results. This leads me to think that 4mm deep may be a non-standard specification for this bearing size. One example is from Boca Bearings. The full bearing code is

This one has 2 rubber seals, and chrome steel balls and races. The site doesn't explicitly state if they're full contact or partial contact. (In performance settings, we might prefer partial contact seals to reduce rolling resistance in hub or bottom bracket bearings. That factor is presumably irrelevant for Swifty's application.)

Another example of a different specification with the same dimensions is this one,

These are ceramic balls, stainless steel races (I think), and two non-contact shields. (This is just as an example. Ceramic balls are sometimes specified for lower rolling resistance. Again, this is presumably irrelevant for the application.)

So, the answer appears to be that 9x17x4mm bearings with contact seals exist. I would recommend searching for the bearing's measurements, rather than for the bearing number. I'd parse the results for bearings that have full-contact seals. I don't know if there's a consistent suffix to denote the non-standard size. If there were, you could just search for 689 + the suffix (fictitious e.g. 689X). I think that -2RS is often used to designate some type of rubber seal, but it may be full- or partial- contact. I am not sure how often listings will clarify this characteristic.

The next part of the question is, will a bearing with non-contact shields suffice for frame pivots on a mountain bike? I can't really answer this one objectively. I don't currently own an MTB, and the only one I've ever owned was a hardtail. Nonetheless, this may relate somewhat to an earlier question I asked about rear derailer jockey wheels. Some of these use bushings, rather than sealed bearings.

I don't know how much contamination gets to the frame pivots. Based on the distribution of grit on my gravel bike, I'd guess that MTB riders should frequently accumulate dirt around the pivot areas. I would suppose, then, that a non-sealed bearing would eventually see dirt ingress.

At this point, you'd need to either service the bearing frequently, or let it degrade and then replace it. Some bearings are designed to be serviceable (e.g. Chris King specifically says you can pry the seals off and reinstall them, Kogel asks you to service periodically and install new seals when you do so). Other sealed bearings are not, as you may damage the seals when you pry them off. I'm not sure if bearings with non-contact shields can be serviced, but I would guess that you can remove and replace the shields (as they don't contact the inner race). Based on that, I would guess that you can use this type of bearing in frame pivots, but you would need more frequent servicing. Given the amount of items to service on a mountain bike, I don't suppose this is appealing.

Igus, which is a manufacturer of bushings, contends that bushings are probably a better choice for frame pivots, because bushings are resistant to contamination. My interpretation of their argument is that they think bushings will maintain reasonable friction and durability despite contamination ingress. In contrast, if you let a bearing get contaminated, the dirt will eventually grind down the balls and races, and your bearing will be destroyed. Note the manufacturer bias here, as Igus appears to specialize in bushings. Also, this is mainly an academic exercise, as I'm pretty sure there's no way to replace the bearings in the pivots for bushings (unless you wanted to replace all the suspension components, at which point you're better off buying a new bike).

Why would bearings with these non-contact metal shields even exist? They appear to cost less. Also, I think that they are preferable in some industrial applications. Rubber seals may be unable to tolerate some rotational speeds. However, I'm talking speeds of at least several thousand rpm. No human-powered bike, or even an e-bike, is going to see that sort of rotational speed on any component. A similar issue exists with operating temperature; the link states that rubber risks melting over 212 degrees Fahrenheit (100 C). However, I am almost certain that hubs won't get to that temperature even in extreme riding conditions.

Not the answer you're looking for? Browse other questions tagged frames bearings size protection or ask your own question.

4
Bearings vs. bushings in rear derailleur jockey wheels - which should be more resistant to contamination?