Buying parts for an extra set of wheels: will a an 11 speed freehub body accept a 12 speed cassette?

I'm mechanically inclined, but I don't know much about modern bicycles. I have a Rocky Mountain C70. Since I live in the city, I'd love to have a second set of wheels that aren't knobby for the paved trails around my area.

I know a lot of people say "just get a second bike", but I don't have the storage area for that, so it's not an option. It's either this project has to work out or I just have to ride my knobbies.

I'm investigating getting a second set of wheels for only occasional use. I've decided to field as much stuff as cheaply as possibly from chinese supplies like ali express, or find used stuff on ebay. It appears I can fit 700c tire/rim combos on my bike because it's setup for 29" tires. I don't want to do a cassette/rotor swap every time, so I'm going to purchase those as well so I can drop the new set of tires on like a nascar pit stop.

I need help with the shopping list and any potential "gotchas" before purchasing items.

What I've found so far is a cheap pair of 700c rims on aliexpress with spokes already installed. The freehub says it's shimano compatible, but for an 11 speed.

It sounds like the wheel in question has an 11s freehub splined for Shimano cassettes. The technical name is a hyperglide (HG) freehub (not relevant to you, but 10s versions of this exist also; the 11s versions will take 9s or 10s cassettes, however).

Shimano and SRAM 12s cassettes won't fit to 11s HG freehubs. I think the freehub technically is long enough, but SRAM and Shimano designed different arrangements. One reason is that many 1x drivetrains rely on a 10-tooth cog for their top gear, and the 10t cog is otherwise too small to fit the 11s HG freehub body. In addition, the hyperglide freehub has shallow splines, and they always get gouged by the cassette cogs. (NB: Shimano originally designed that its HG freehub body to be steel or titanium, which would eliminate the gouging problem. However, many manufacturers moved to making that part in aluminum, and aluminum is softer than either material.)

I believe Sunrace makes 12s cassettes that do fit to that FH body, as does SRAM (see Nathan N's comment). You could also buy a SRAM XD or Shimano Microspline freehub and replace it, if the hub's manufacturer or seller sells them. The thing is, that adds to the cost, and if you're buying on Aliexpress, we don't know who made the hubs. There are a number of Taiwanese companies that make hubs for many major brands, e.g. Novatec, Bitex, and Formula. If you could identify the hub manufacturer and it was one of those three, then perhaps you could source the freehub on your own if the seller couldn't. However, this can be difficult. Also, the seller on Aliexpress may not have deep expertise in this sort of issue, and it might not be worth their time to help you even if they did.

For the hubs, your frame may accept non-Boost, Boost, or Super Boost spacing. I'm not familiar with mountain bikes, but I think those are the only three hub widths to be concerned about (I could be wrong!). You obviously need to match the hub width to the frame. The thru-axle diameter is also an issue, but likely a lesser one. You will just need to make sure the hub's end caps have the same diameter as your frame (e.g. road and gravel bikes are usually 12mm front, 12mm wide x 142mm long).

However, the discs are not guaranteed to be exactly in the same position! The spacing can vary a bit from hub to hub. You can get thin metal shims to adjust the precise position of the rotor, however.

You can put 12 speed on any of the freehub body types found on mountain bikes (HG, XD, or Micro Spline), but if you want to use a 10t small cog you can't use HG.

The spacing from the rotor mount surface to the dropout is standard, but the tolerance is big enough to make this the spot where alternate wheelsets can be tricky to make work with no adjustment. In other words, between two hubs of rhe same OLD spec, with the same rotor on each, the rotors will wind up close to the same plane, but possibly not close enough to center them given you're working with so little margin for error. The first thing to do if you can is get another one of the exact same hub, although I understand that may not apply here.

With 6-bolt you can use micro shims to build up the rotor mounting surface of whichever hub is more inboard to achieve drop-in interchangeability as best as possible. It will still be subject to rotor wear and trueness. There's no equivalent trick if one of the hubs is centerlock and it happens to place the rotor more inboard.

Hubs usually put the cassete in close enough to exactly the same position for wheel swaps without adjustment. In the road world this is important because rapid wheel swaps are so integral to the sport. As you can imagine, it's still possible for tolerance considerations to make it not work, and a cheap MTB hub with 12-speed is probably about the most likely place for that to occur. There aren't any shims small enough I'm aware of to tune it the same way as above.

Many wheels don't come with rim tape or strips. And from your list you'd also need tubes or valves and sealant as applicable.

Another possible solution is to simply ride the knobblies. As they wear down your road-ride will improve, and it helps your fitness too!

Once they're worn out you might choose to fit a combo tyre, with a smoother central band, but knobs on the shoulders.

Example (not a product rec) this tyre has a smooth circumference, but some lugs on the corners. 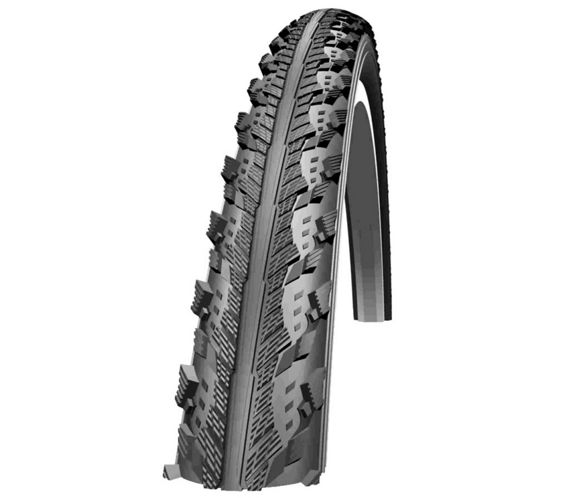 Not the answer you're looking for? Browse other questions tagged wheels disc-brake cassette hub or ask your own question.

4
Best 9 speed cassette for fast & flat
1
7-speed cassette on an 11-speed freehub
3
How do I mount this Topeak rack onto this road bike with disc brakes?
0
What other parts might need replacing if I replace an old freewheel gear set for a modern freehub cassette?
5
Are 23mm tires on a 25mm rim (21 mm internal width) safe?
0
Help determining spoke length along with an education
2
What modern wheel and tire size could be replaced from 32-630 ( 27 x 1 ¼ ) wheels
0
Old Cannondale MTB. 2nd set of wheels. Orig wheel has 8 speed cassette…2nd set has a 7 speed. Need advice
4
Is the lateral brake disc position standardized (and, if so, to what tolerance)?
1
How to silence a creaking cassette/freehub body