What do I do when I am unsure if a carbon fiber component is safe to use or needs replacing or repairing?

Intended as a canonical answer to the many questions we have about damage to carbon parts.

It is well known that carbon fiber parts can be damaged and fail, and carbon parts can be fragile when stressed in certain ways, but we get a large number of questions on this site asking if a carbon part (Frame, rim, stem) with damage is a concern or not. Many of these parts are obviously suffering no more than a minor cosmetic blemish, and very few are suffering from clearly significant damage. Most fall into the gap between where physical inspection is required to make an assessment.

Carbon fiber composites are made up of sheets of carbon fiber filaments. These are usually impregnated with resin. To make CF structures, manufacturers will cut up the sheets, then lay them up onto a mandrel or other structure. They will then bake them at high pressure and temperature to cure the resin. The image below is from a Youtube video showing how Mad Fiber wheels are made - that company is now defunct, this is just for illustrative purposes. The metal item is a mandrel, which is a bit like a mold except that you put sheets of carbon on to a mandrel, versus you would put things in a mold. 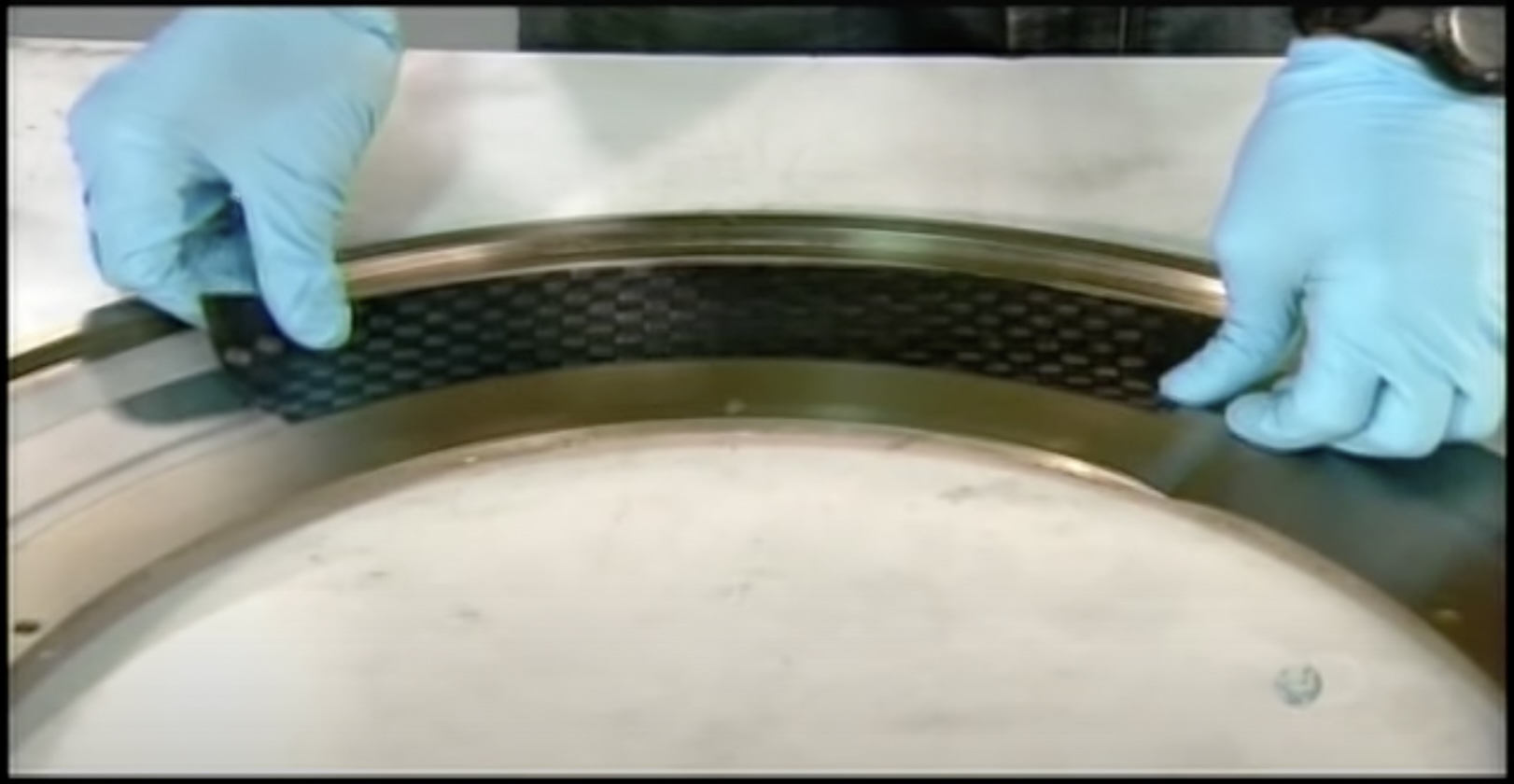 If you have a CF frame or component and it's been damaged such that you can see torn fibers, it needs repair or replacement. This is obvious but probably worth stating. The image below is from Appleman Bicycles, who is a carbon framebuilder and repairer in my city. Disclosure, he's local to me and we are acquaintances, but I'm not a customer. On the left side of the frame, the fibers are clearly broken. It may not be as obvious on the right side, but I'm pretty sure that if you saw that frame in person, you'd see broken fibers also. 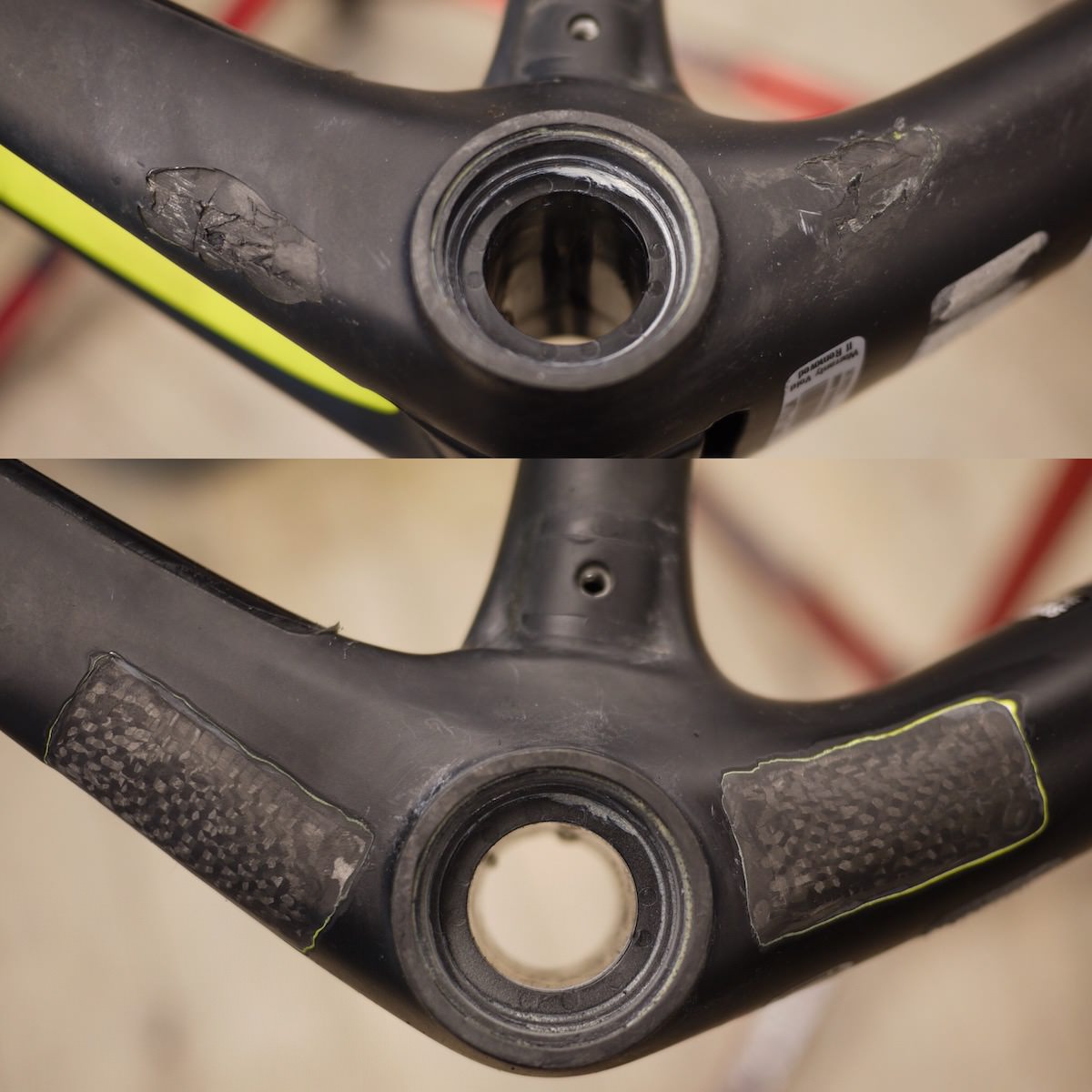 With that trivial question out of the way, it is frequently hard to know what to do if you crash on a carbon frame or component and there's no obvious damage. Damage to carbon items is frequently not visible at the surface. However, an impact, even a fairly soft one, might lead to a delamination below the surface that later grows into a larger failure. Delamination is the CF term of art for a fracture.

Ultrasound or other imaging is used to inspect CF parts in the aerospace industry. Ideally, we would have this capability widely available, but we do not. This is the only reliable way to detect a delamination under the surface. There may be a carbon repair shop close to you with this capability, but your local bike store cannot do this. Many people will propose a tap test, where you tap a coin lightly around the suspected fracture and listen for a change in pitch. The problem is that this test is most reliable on flat surfaces, and bikes don't really have a lot of those.

What to do: a proposed set of steps for consumers

This section concerns what to do if you sustain an impact that doesn't leave visible damage. For major impacts like a car vs. bike accident or a crash at racing speeds, more caution is recommended. It also depends on what part is involved; if your handlebars are damaged and they break, that will almost surely cause a crash, although if you are extremely skilled you may be able to recover (but you shouldn't count on being able to do this). I think the same would hold for stems and forks. I would lean towards replacing these parts immediately if you take a major impact. Minor impacts can be handled through watchful waiting, but some level of caution and regular inspection is still recommended.

I'm less certain about frames. In many cases, they are shielded from direct hits by the other parts of the bicycle and by your body. Again, the ideal case would involve an ultrasound or equivalent inspection after a crash. In the absence of that, I would propose watchful waiting. Be familiar with how your bike sounds and how it flexes under your pedaling. If you notice a sudden change, stop riding and try to see if there are any cracks. The picture below is from a video by Raoul Luescher, a carbon bike repairer based in Australia. Here, a metal part associated with the steering system hit the bike's head tube from inside due to arguably poor design. There was a small visible crack from the outside. 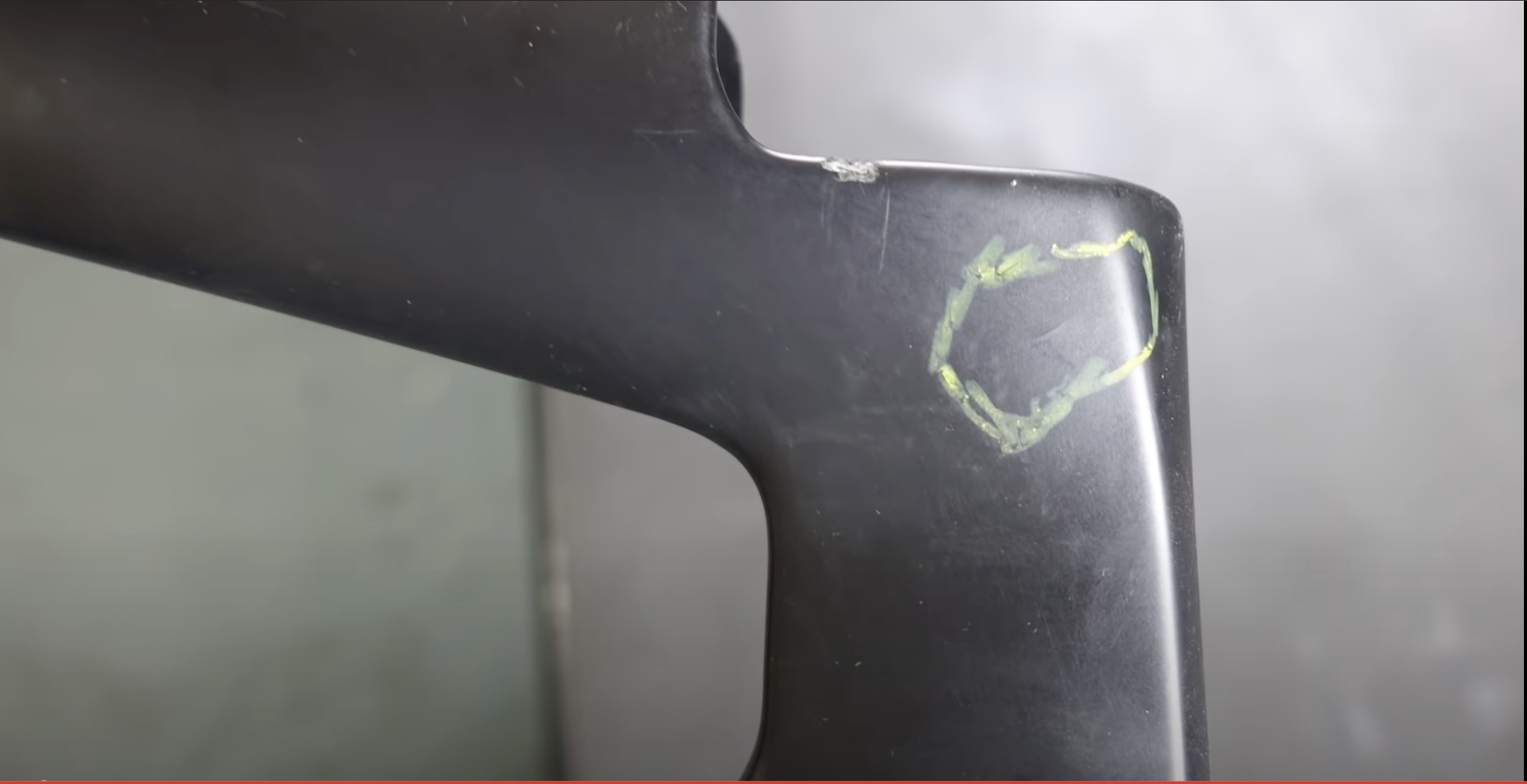 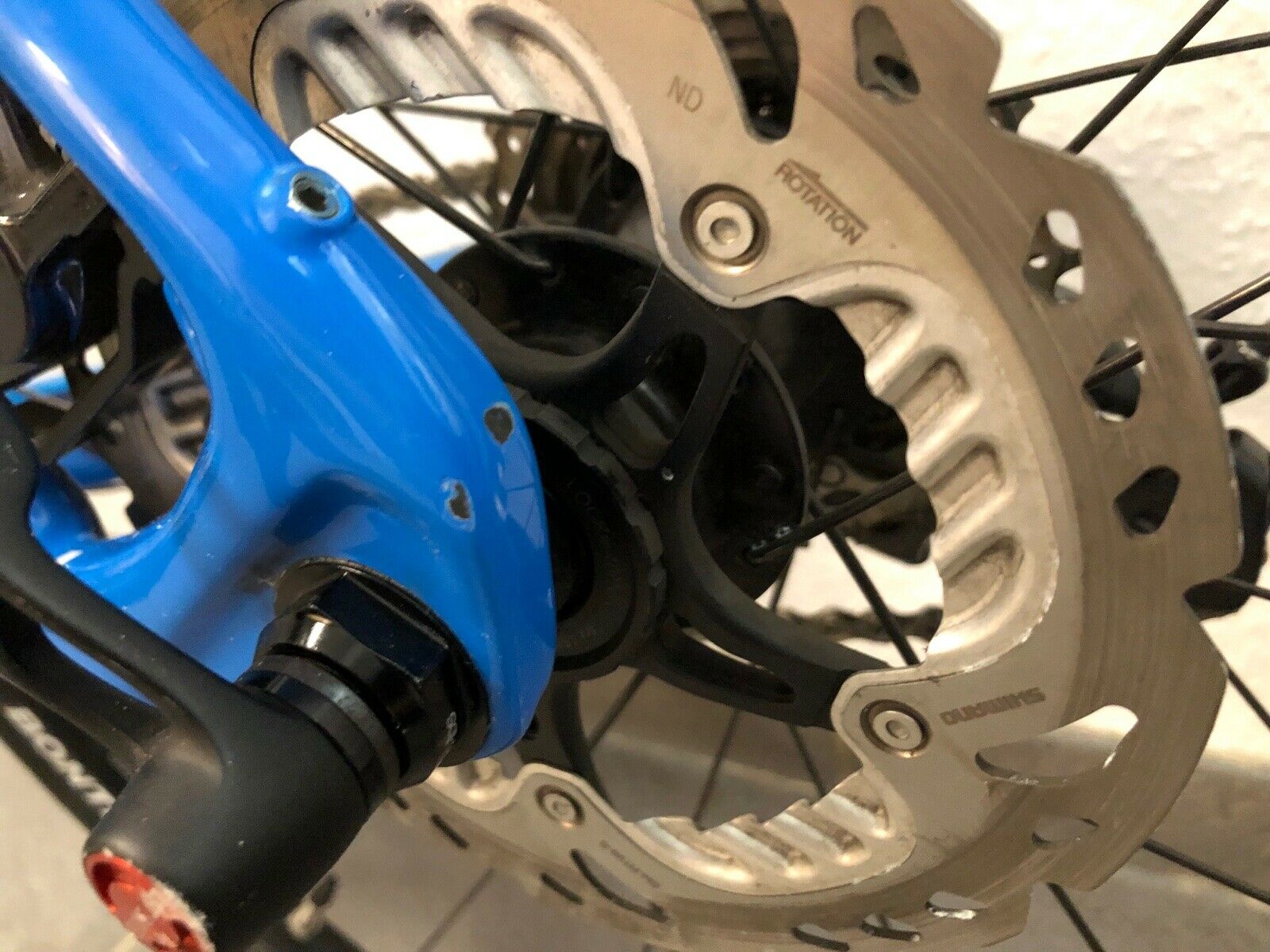 Last, consumers should be aware that damaged carbon frames can be repaired. These repairs are not that expensive compared to repairing metal frames. On metal frames, damage will frequently involve replacing the entire affected tube. In contrast, with carbon, the second photo from Appleman bicycles shows that repairs can be localized to just the damaged area. I believe that forks, wheels, stems, and handlebars are not cost effective to repair; you should just replace those if damaged.

As a side note, carbon fiber does not have inherently poor potential lifespan. It has a very long fatigue life, although @NathanKnutson correctly notes that the engineering concept of fatigue in metals does not apply to carbon fiber composites.

A note on handlebars and forks

If you crash or drop a bike, by virtue of their position, the handlebars are likely to take an impact. In contrast, it is unlikely that you will hit a carbon crank but not the handlebars. In the case of head-on collisions, you can assume that the fork has taken a hard impact as well.

If a handlebar or fork fails under load, you are extremely likely to crash. It may be worth being more conservative with these parts if they're made of carbon, and leaning towards replacing them if damage is suspected. In fact, it may be good advice to replace these parts regularly. I realize that this is easier said than done, and I am not aware of empirically-backed replacement intervals for these parts.

For many frame tubes, if one tube fails under load, a skilled rider can often come to a controlled stop, and there is some degree of redundancy if the tube is a chainstay or seatstay.

Some notes on prevention

My understanding is that CF does especially poorly under point loads - i.e. getting hit by a small hard object. While this is easier to say than to do, users can consider all the scenarios where hard objects might hit the frame and try to mitigate them. In this question, the poster packed their bike in a bag, but the fork rotated and the rim brake caliper hit the frame. While the solution would again be watchful waiting, it's worth trying to avoid such things happening. For example, if packing a bike, one could try padding the rim brake calipers or otherwise not pack hard objects in the same case.

A side note: minor surface damage inside the frame

As I discuss on another answer, frame manufacturers designing for high-level competition obviously push frame design. There may be cases when a carbon tube is flexing against a metal item. For example, in late 2021, Specialized recalled their Tarmac SL7 frames and forks. The headset had a compression ring on the outside of the fork steerer. As the bike hit bumps, the compression ring had an relatively sharp edge that dug into the steerer tube's surface. This would eventually cause a failure. However, Raoul Luescher raised an issue with the fix, namely that now the compression plug, which was cut to length, could have a sharp edge as well. He showed a borescope shot of the inside of the fork where the edge of a compression plug marked the surface of the fork, and he argued that this is likely to fail eventually. For performance road bikes with hydraulic hoses routed inside the steerer, an unexplored issue is that over time, the hoses might abrade through the steerer tube's fibers as well.

The watchful waiting advice applies to damage from one-time events. The issue of damage from repeated events is a more serious one. However, this sort of damage is likely to happen outside your line of sight, and it might require specialized tools to even see.

Not the answer you're looking for? Browse other questions tagged repair carbon damage crash canonical-answer or ask your own question.

2
Carbon fiber aesthetics vs. poor craftsmanship vs. possible repair?
0
Carbon Bike Frame Chip At Rear Wheel
0
Carbon crack or cosmetic damage?
0
Are these scratches at carbon fiber something to worry?
7
Does carbon fiber not have a fatigue life?
7
Is it safe to ride the carbon bike with a small crack on the bottom of the chain stay? Looks cosmetic but fails the tap test
6
Is my carbon frame done?
6
Post crash damage assessment: can I keep this carbon fork and this front wheel?
7
Chain damaged carbon frame. How to remedy?
3
Brake damaged carbon frame — what to do?
See more linked questions

3
What parameters are important when replacing a rear hub?
4
Is it safe to use aluminium seatpost adapter (27.2mm to 31.6mm) for a carbon frame?
2
can I use an aluminium seatpost to install a tagalong on a carbon fiber frame?
10
What are these mounts for on inside edge of carbon fiber fork?
1
What to do with scratched top tube on carbon fiber frame with no structural damage?
4
How to secure a fully carbon (aero) bike when washing/repairing on a stand?
13
Front disc brake wobbling / grinding on pads after full braking and minor plunge