Why does the rear brake bowden have no housing below the frame of the bike?

I observed that the bowden of the rear brake calipers runs "naked" below the bike frame. (Also the gear shifting cables, but let's focus on brake cables for this question.)

(I.e. the section between the lever and the frame is covered with housing, then, below the frame, no housing, and then the section connecting the frame and the calipers, again has housing.)

The question is: what is the reason for this? And more importantly, if I replace the bowden for the rear brake, would it be a good idea to add housing below the frame as well (to protect the whole bowden from dirt and water, rather than leave that naked section)? Of course the housing would have to be interrupted at the suspension points, leaving a little bit of bowden "naked", but at least most of it would be protected?

I tried to come up with some reasons, for why that part is naked:

Secondly, every centimeter where the inner wire runs in housing adds friction. You want cable friction to be minimal for best brake feel. However, the only drawback with bare wire is that the points at which it goes inside the housing are prone for dirt intrusion that can increase friction. Typically the dirt intrusion risk is minimal and the friction the extra dirt would create is so small that it's better to have exposed inner wire than it's to have whole-length housing. With gear cables, the dirt intrusion makes shifting worse so there are end caps with o-rings that have a worse friction when new but better friction when dirty.

Thirdly, as you correctly note, every centimeter of housing has a cost. By minimizing the amount of housing needed, it's possible to shave one dollar or so from the bike cost. This effect is added to the effect of needing less holding points which might save another dollar.

Also housing has a non-zero weight and air resistance. Some weight weenies might object to having excessive housing, but this effect is minimal and probably the air resistance of these two is the main consideration.

Today, there are bikes that have whole-length housing for both the gear cables and brake cables (if they still use mechanicals; popularity of hydraulics seems to be increasing). Typically these bikes just put the housing for all cables inside the frame. It's a major pain in the ass to replace these, sometimes you can replace the inner wire with a tandem-length one and use the tandem-length inner wire to guide a new housing and then replace the tandem-length inner wire with a proper-length inner wire. But if you make the mistake of pulling the old housing out then you need a lot of effort with expensive magnetic cable pulling tools to guide the new housing. For steel frames such magnetic cable pulling tools won't work because the steel frame interrupts the magnetic field.

You do not really need the housing functionally, the bowden runs straight between two fixed points. There is nothing that could compress or deform. It just works well as is. You only could add it as a mechanical protection but it is not customary and could add some additional unnecessary friction.

Racier bikes do it above all because it's weight that can be taken away. That may sound trifling, but you get to a light bike by marginal gains in lots of little places.

On other bikes it's about the compromise between squish and contaminant ingress.

Interrupted housing gives more entry points to water and dirt. So it needs to be replaced more and can be subject more easily to friction and poor feel.

All housing, but particularly traditional spiral brake housing, compresses under force. The more of it you have, the more compression is happening. So in other words if you compare the same brake and lever set up with interrupted housing versus continuous, the continuous setup has more of its lever throw being used up just on the housing compressing.

Front brakes have less distance to go and so this effect is usually minimal. Front brakes usually feel firmer than the back. When you give the back continuous housing, this disparate feeling is maximized. Some riders don't care about that but it really bothers others.

A case in point is the Speedvagen bare cable routing. I got to play with one once at NAHBS and it was pretty enlightening. Very symmetrical lever feel. It only works on seatmast frames with cantis or centerpulls, and executing it to not add much friction is probably very time-consuming. But I think there's a strong argument that given those other things, it's how the routing "should" be done. 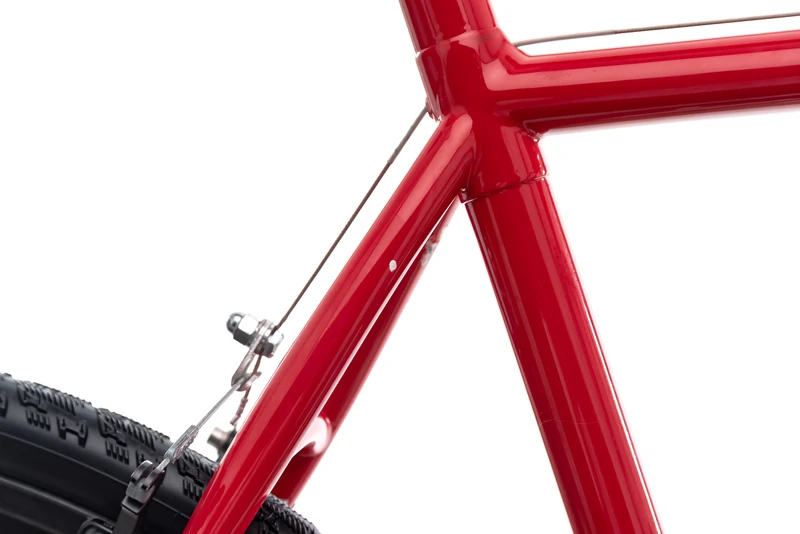 Compressionless brake housing mostly obliterates the issue, but it's more mechanically finicky and winds up needing replacement more often, so it's not all upside.

Not the answer you're looking for? Browse other questions tagged cable cable-housing or ask your own question.

7
Can you buy bulk shifting/brake cable for road bikes?
20
Why does cable routing utilize alternation of sections of shielded and unshielded cable?
3
Modifying Brake Cable to Fit?
1
Options for fully lined bulk cable housing
4
Would using compressionless brake housing for derailleur be a problem?
1
Brand New Bicycle Brake Cables Popping out
8
What tools do I absolutely need to replace brake cables?
0
Brake cable rubbing seat post
6
Housing cable keeps moving and gets tighter on the derailleur after jumping