Could one predict from power data whether a cyclist is standing or sitting?

I was wondering about this machine learning problem: Take a large sample of data from rides that includes whether a cyclist was standing, what the cadence, power, (or perhaps even torque?) and gradient are. Is it possible to predict using machine learning (ML) techniques whether a cyclist is standing or not? I would assume that this would be of some use for Zwift or other racing apps to show whether a cyclist is standing or sitting (and perhaps even determine air resistance based on that). Right now their algorithm is a bit too simplistic (with a fixed gradient/cadence rule).

My idea is roughly that the power distribution over a single stroke should look different for a standing cyclist and a sitting cyclist. Of course this would all need to be conditioned on personal variables of the rider (weight, trainer model, power meter) but those are issues that ML is really good at. But I wonder if there are any reasons why this would be completely impossible (for example, if power meters can only measure power over 1 second at sufficient precision).

Update: Indeed most power meters measure torque at a higher frequency and transmit this data to the cycling computer/trainer app/etc.. However, these cycling computers usually only provide files at a data frequency of one datapoint per second. Therefore it seems that only cycling computer specific solutions would be possible.

The short answer is: with power data alone? No. With power and speed data? Yes, sometimes. The longer answer is an explanation of the conditions under which one can sometimes tell.

First, here is Fig. 2 from Martin et al. "Modeling sprint cycling with field-derived parameters and forward integration" with the transition from standing to sitting highlighted with red rectangles superimposed on the original figure.

These data were collected from maximum sprint efforts for three world-class track cyclists, and you can clearly see the discontinuity in power from standing to sitting. The data were collected at 5Hz using a crank-spider-based power meter (the SRM track model). So, this is evidence that there are situations where one can spot the difference between standing and sitting even without using a pedal-based power meter.

A harder question is whether one can, under more general conditions, determine whether a rider is transitioning between standing and sitting, or between sitting and standing, using power and speed data. The answer, it appears, is "sometimes, under certain conditions."

First, let us clarify that there are two different situations where one stands while pedaling: often one stands when one is trying to accelerate (as when accelerating from a stop, or when attacking in a race--those two situations are illustrated below); sometimes one stands just to change position, but without changing speed or power. If speed and power don't change, then power and speed data will not be able to tell the difference. In addition, sometimes we only stand for a pedal stroke or two and then sit down, as when starting off from a stop. This is a case where the shorter the time spent standing, the harder it is to determine from power and speed data alone whether the standing occurred. This is related to the sampling rate of data collection: in the example above from Martin et al., the data were collected at 5 Hz; in situations where the data are collected at 1 Hz (as is common for most "consumer-level" power meters), it is harder to spot discontinuities in power and speed.

In this study published in 2020, Wilkinson et al. discuss biomechanical differences between seated and standing climbing. They found that there are differences in power production via changes in pedal force and pedal speed but, as mentioned above, one cannot always tell when a rider is sitting or standing.

There are still situations where it is possible using 1 Hz data to spot the transition from standing to sitting, but it is easier the greater the change in power and the longer the standing "excursion" is before returning to sitting. In the plot below are two sections from the same ride showing speed, power, pedal force, and cadence, where I stood, briefly, marked in blue. The data were collected from a hub-based power meter, once again not from a pedal-based power meter. 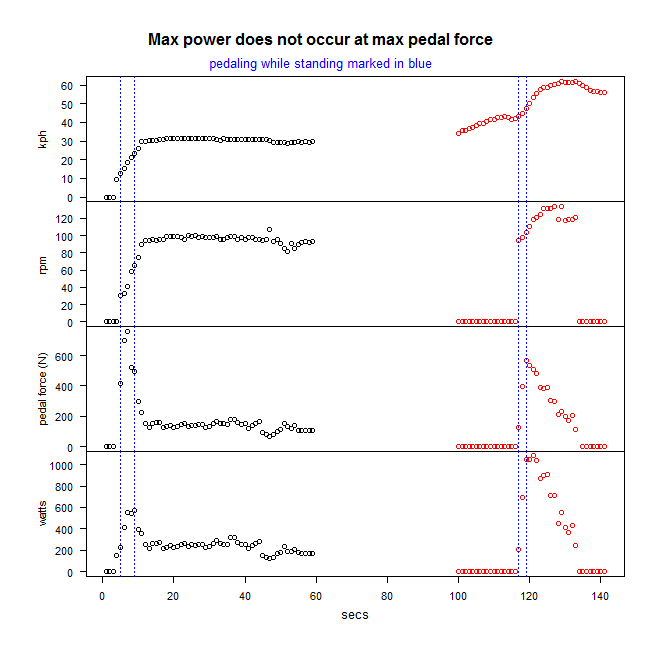 However, what I don't show is that there were a few stop lights during that ride, where I stood for just two pedal strokes or so, at more moderate pedal force, and it is very difficult to identify the standing solely from power and speed, as Wilkinson et al. concluded.

Thus, the longer answer: sometimes you can tell, yes, but not always. The longer the standing excursion (or equivalently, the higher the data frequency) and the greater the difference in pedal force and pedal speed, the easier it is to spot the transition.

There is a problem here in that there is currently no sensor on the market (that i'm aware of) to measure sitting/standing. And unless i'm misunderstanding ML, we would need that input into our data for it to learn how this correlates to the cyclists power/cadence etc.

However, i'll ignore that and look at a couple of options that might give promising results.

A few thoughts on the feasibility and reliability.

Not the answer you're looking for? Browse other questions tagged technique trainer or ask your own question.

1
How might I measure the proportion of a ride spent in various hand positions, or has it been studied?

1
Speed to power calc on a 'basic' magnetic trainer