Ok, we have a Rhoades Car 4 wheel bike. It has a top, fenders and the works. It currently has 20 inch tires on it.

Years ago we contacted the company to upgrade to 26 inch tires. We never got around to it. It would be pretty easy to slap trike wheels it but.......Now on top of the 26 inch tires, we want to go to fat tires.

The company says it still exists but there is little of the original car still offered. There is an "Instructables" on converting a fat tire bike to a fat tire 3 wheeler. He says either have a custom wheel built or build it yourself. He bought hubs from husky and built it himself. The differences are that the existing axle would not be long enough to fit through a new hub if they are wider.

Could a person just use a standard width hub when lacing the wheel? I know it's unnecessary to make the bike fat but it's just for fun. Our son started on it and it's a project.

Be gentle if I said something wrong or am missing something. Thanks for the help and thoughts. 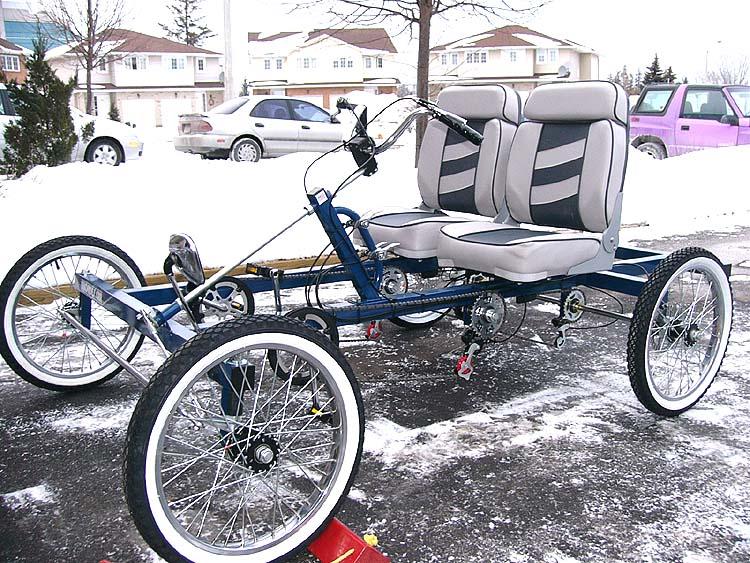 By Ahunt at English Wikipedia - Transferred from en.wikipedia to Commons by Liftarn using CommonsHelper., Public Domain, https://commons.wikimedia.org/w/index.php?curid=11342288
From https://en.wikipedia.org/wiki/Rhoades_Car

Based on the stock photo, your quad has nothing much in the way of the wheels. But you've also said it has fenders (mudguards) and a top which might get in the way.

Gearing If we assume you can pedal comfortably at 20 km/h at around 60 rpm, then its about a 40 tooth chainring and an 11 tooth sprocket. If nothing else changes, going to a 26" wheel with a 100mm width then the same gearing is almost 30 km/h.
GREAT you think, but the effort to get to those speeds will be roughly 5x higher. So you're unlikely to get to that same gear combination, and would be happy in 40:16 to give the same 20 km/h.
That might be acceptable, but you've lost access to about 4 gears at the low end because of this.
I can't see how your drivetrain is constructed, but you could restore the gearing by decreasing the chainring from a 40 to perhaps a 28 tooth. Don't take these numbers as fact, they're estimates. I used https://www.sheldonbrown.com/gear-calc.html to work the numbers out.

Tyre Clearance When turning, your bigger front wheels risk touching the frame at the ends of travel. This can be prevented by adjusting endstops but your turning circle will get bigger, and you may have to 3-point-turn where in the past you could do a U turn.

The other option is to put the wheels further outboard, but this bike is already very wide and may exceed the maximum permitted width for a bicycle in your legal area.

Wider tyres want to be run at lower pressure too - this will increase the resistance to turning, making the steering feel heavier. Again, not a lot but it will add up.

Mass the 26" rim will weigh more than a 20", and a fat tyre weighs much more than the same sized non-fat tyre. Acceleration will be slightly decreased though probably not noticeably. Climbing a hill will be much more work.

Also, the tread pattern may be significant. I'd expect fat tyres to also be knobbly, which will roar when ridden and increase your rolling resistance substantially. Look for smooth or very minimal tread tyres.

Conversion There are two ways to do the upsize of the wheels.

It appears that the central question here is can you use a "standard width hub."

Quadricycles and trikes don't have widespread or default hub standards in the same way bicycles do. There are a number of dimensionally different designs out there for how they attach to the axle, how wide they are, how they're driven, etc. In your case I can't tell whether the brake rotors are mounted to the axle or the hub, and you would also need to match that. Usually it's the case that like replacements can be had, but you need to take careful note of what you have to get the right thing.

If you're in touch with the company, they can probably tell you how to get 4 new hubs or at least what you're looking for. One catch is hole count - the stock photo above has 36h hubs. If that's what you have, getting the same hubs would then force you to figure out exactly what 36 hole fatbike rims you're going to pair them with, because 32 is the ubiquitous number for that. That's not to say there won't be any choices, but certainly far fewer.

It appears on this quad that the rear axle is always turning and probably has a hidden keyway to attach the hubs, and the rear hubs may not have their own bearings. (They don't need them in a design where the axle has its own bearings like this, but may have them anyway so that all 4 hubs or wheels can be the same).

You need to know all the dimensions for the axle keyway interface, the internal diameters for the bearings/bushing internal diameters that attach the hubs to their axles, and the spacing for those bearings/bushings (their width in terms of the first thing to touch the axle hardware to where the nuts on the ends press against). Then you can get hubs or have some made.

Depending on the hubs you can come up with and the rims you want to use, you may find a disparity in what spokes play nice with them. (The hubs pictured are using what are considered oversize spokes by bicycle standards, 12ga likely). You might be able to find 26" fatbike rims drilled for the big gauges, but whether they're the ones you want to commit to for a project like this is a separate question, since they'll be made for e-fatbikes and therefore will probably be garbage. There are 13ga nipples that work in normal bicycle rims so that's the "easy" direction to go in if you can find hubs that will take 13ga reasonably.

You'll have to think about whether in your redesign of the quad you want to stay with the original dish of the wheels or do something different, since it will be riding higher. If yours is like the photo above, you also need to figure out if there will be interference between the tire/wheel and the seats and if so what to do about it. It might be a problem that can be solved or helped by adding dish (making the rims offset toward their hubs' outer flanges), but doing that a lot also reduces total spoke tension and therefore also reduces strength.

Not the answer you're looking for? Browse other questions tagged replacement modification heavy quadracycle or ask your own question.

1
Bike wheel help for newbie
2
Bike modifications against side winds
2
Mountain bike tires
3
Wheels for fat guy - 27.5" vs 29"
1
Trying to figure out which tires/tubes I can use
3
Recommendations for 'upgrading' gravel bike with road tires?