I was diagnosed with lumbar spinal disc herniation and told that I should exercise. I always liked biking, so I want to do that.

I have an older rigid mountain-bike and will be mostly driving on asphalt bike-roads. I know I should pay attention to bumps, so I stand up and use my legs and arms to take the hit.

Are there any more precautions I should take or things to avoid?

To be very to-the-point, in your situation I would first consider the following two things:

I have studied medicine (and have a little back pain, also), so the rationale is the following: 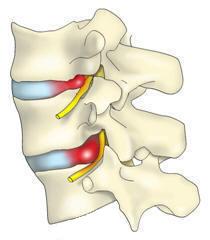 This figure illustrates a part of the lumbar spine, as would be seen if the rider was passing from right to left on the bike (left is front, right is back).

I don't enjoy very much the feeling of sprung saddles (I have a Brooks Flyer), and I think that's because they pivot around the nose, thus bending the lower back and pelvis while going down, in a flexing motion. Seatposts, on the other side, have a translation movement, without pelvis rotation.

Having ridden some suspended-seatpost-equipped bikes, I can say one thing: they are awesome! And since you have a condition, thus are probably not wanting to become world champion anymore, the minimal, questionable performance decrease is overwhelmed by the very significant gains in comfort and health risk reduction.

I had a bad case of sciatica due to a lower back issue, and riding my recumbent bike seemed to help a lot. I documented the experience in more detail on my blog.

Not the answer you're looking for? Browse other questions tagged mountain-bike health or ask your own question.

3
biking with lower back pain
7
What do I do wrong to get hip aches after biking?
2
Cube Analog Disc vs. Cube Aim Disc
15
Should the bike or the rider take the jolt from a bump, and how?
1
Mild pain in lower forearms during biking
10
What's the proper science-driven way to treat mild scrapes/abrasions (that have a bit of dirt in them) from a mountain biking crash?
11
Might biking lower forehead temp readings at destination?
1
Mountain Biking with Heavy Rider and Rigid Bike