How does riding at different air densities affect Power Output and Speed?

Just coming back to this question as there are a few considerations.

The OP only mentioned (barometric) air pressure and not necessarily altitude. I'll start with barometric pressure only and come back to impact of altitude.

Typical barometric pressure variations at the same altitude, and hence impact on the partial pressure of oxygen (O2), are not so big as to be noticeable to one's ability to generate power, however they are sufficient to impact the speed one can attain for a given power output. It may not be all that noticeable in general riding about town, but time trial riders will be able to achieve faster or slower times depending on the barometric pressure.

Since you are unlikely to ride in a hurricane or cyclone, the fluctuations in barometric pressure for conditions you will actually ride in are typically only a couple of percent. Even so, for a time trial racer, over a 40km course the difference in air density between low and high pressure days can result in a 30 seconds difference in time on course, all other things being equal.

Impact of Altitude on Performance

If we consider the impact of altitude on cycling performance, as others have said there are two primary factors:

i. the physiological impact to your ability to generate sustainable power as the partial pressure of O2 reduces with increasing altitude, and

ii. the physics impact as air density reduces, meaning one can attain a higher speed for the same power output (ceteris paribus).

As we climb to higher altitudes and air density drops, the "thinner" air means a reduction in the partial pressure of oxygen, which negatively impacts the power output we can sustain via aerobic metabolism. That loss of power can be as much as 20% or more depending on how high we go, and our individual response to altitude.

There have been a few published papers examining the impact of altitude on aerobic athletic performance and from these formulas to estimate the loss of power as a function of altitude have been developed. There was one from the 1989 paper by Peronnet et al, two from the 1999 paper by Bassett et al, one each for acclimated and non-acclimated athletes. Adding to those, I have generated a fourth formula, based on the 2007 study by Clark et al. The relevant papers are:

Peronnet et al used empirical data from actual world cycling hour records to estimate the impact of altitude on an elite cyclist's power output. The assumptions used in estimating altitude induced power loss may have some error; in particular due to methods used to estimate the power for each rider as neither the power nor coefficient of aerodynamic drag was actually measured.

According to the old Wattage forum FAQ item by Dr David Bassett, Jr, the two Bassett et al formula were derived from earlier papers examining altitude impact on aerobic performance of four groups of highly trained or elite runners. So while these formulas were not derived from cyclists we can still generalise from those to the loss of aerobic capacity for cyclists.

I used these data to generate a formula similar to those from Peronnet et al and Bassett et al (which make up the numbers in the table listed in one of the other answers). Of course there is an assumption of an equivalent reduction in 1-hour power as for 5-minute power. Clark et al noted slightly greater reductions in VO2 peak than for 5-minute maximal power, and no change in gross efficiency at 5-min max power with altitude. So there is some anaerobic metabolic contribution presumably making up the difference. There was some loss of sub-maximal efficiency noted at a simulated 3200 metres.

I chose in this instance to use the reduction in 5-minute power rather than fall in VO2 peak as the base data for the formula, and applied an adjustment to offset the formula for sea-level equivalency to bring it into line with the formula by Peronnet et al and Bassett et al. Of course when you look at the reported data there are of course sizeable variations within the test group at each simulated altitude, so the formula is based on group averages for each simulated altitude.

Here are the formulas:

and in chart form they look as follows: 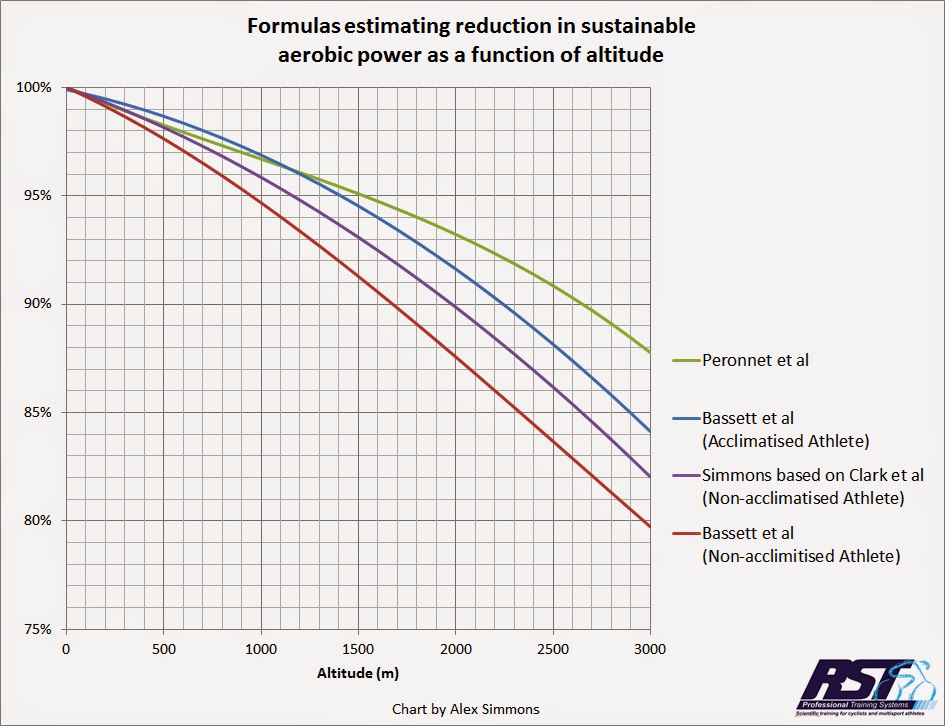 Now keep in mind these are averages for the samples used in each study and individual variation exists, so the impact to any individual will be in this range but could be more or less.

The physics is fairly straightforward and unlike the physiological impact it applies equally to everyone. As an example I examined the influence of altitude on the physics of cycling’s world hour record, and showed how the reduction in air density as altitude increases means one can travel faster for the same power output, or put another way, the power demand reduces at any given speed as altitude increases.

That resulted in this chart, which shows the relationship in power to aerodynamic drag ratio (W/m^2) and altitude for speeds ranging from 47km/h up to Chris Boardman's 56.375km/h record. 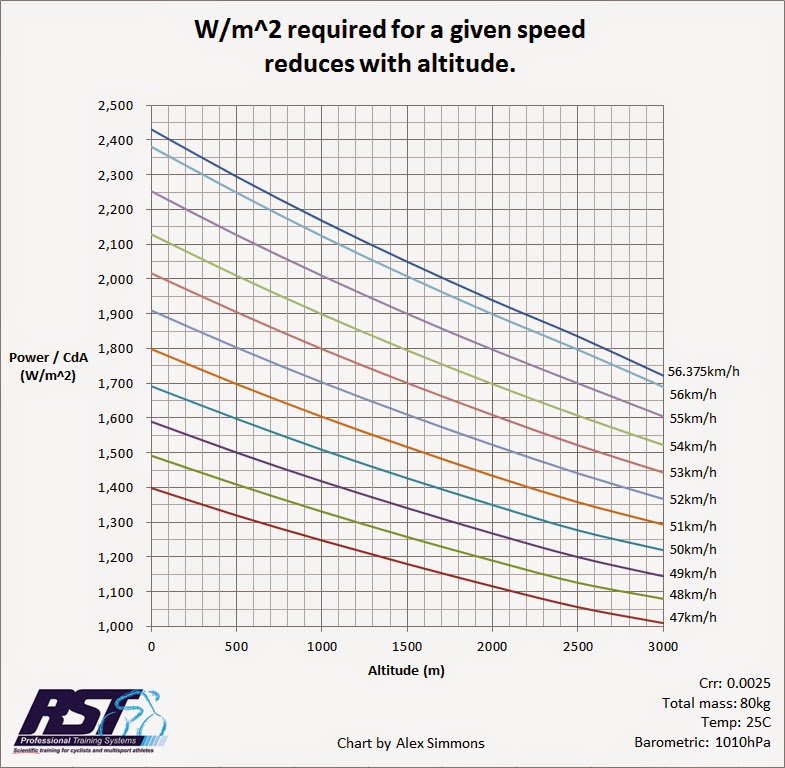 In essence, as altitude increases, the power to aerodynamic drag ratio reduces for the same speed.

The net impact of both the physiological and physics impacts

Well when we combine the two, this is the result: 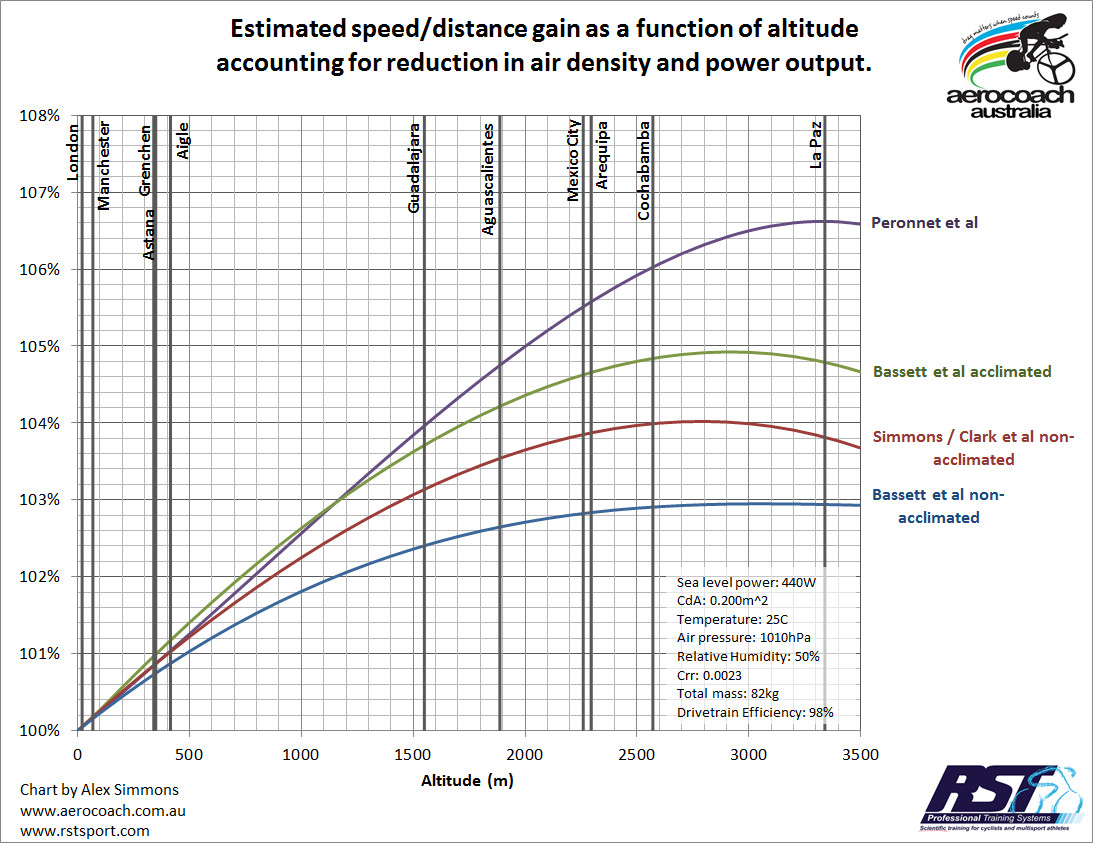 This should be reasonably straightforward to interpret, but even so I'll provide some explanation.

The horizontal axis is altitude and the dark vertical lines represent the altitude of various tracks around the world.

The vertical axis is the proportion of sea level speed attainable.

The curved coloured lines represent the combined impact of both a reduction in power using each of the formula highlighted above, combined with the reduction in air density enabling greater speeds for same power.

So for example, if we look at the green line (Basset et al acclimated), this shows that as a cyclist increases altitude, they are capable of sustaining a higher speed up until around 2,900 metres, and any further increase in altitude shows a decline in the speed attainable, as the power losses begin to outweigh the reduction in air density.

The track in Aigle Switerland represents around a 1% speed gain over London, while riding at Aguascalientes would provide for between a 2.5% to 4% gain in speed. Head to Mexico City and you might gain a little more, but as the chart shows, the curves begin to flatten out, and so the risk v reward balance tips more towards the riskier end of the spectrum.

Altitude therefore represents a case of good gains but diminishing returns as the air gets rarer. Once you head above 2,000 metres, the speed gains begin to taper off, and eventually they start to reduce, meaning there is a "sweet spot" altitude.

Caveats, and there are a few but the most important are:

I suspect that the drop off in performance with altitude might occur a little more sharply for many than is suggested here. Nevertheless, the same principles apply even if your personal response to altitude is on the lower end of the range, and it is hard to imagine why anyone would suggest that heading to at least a moderate altitude track is a bad idea from a performance perspective.

If you want to read some more, I cover these issues in three blogs items here:

The following chart can be found in an interesting article on Training Peaks blog. From this you should be able to adjust your power level occordingly. 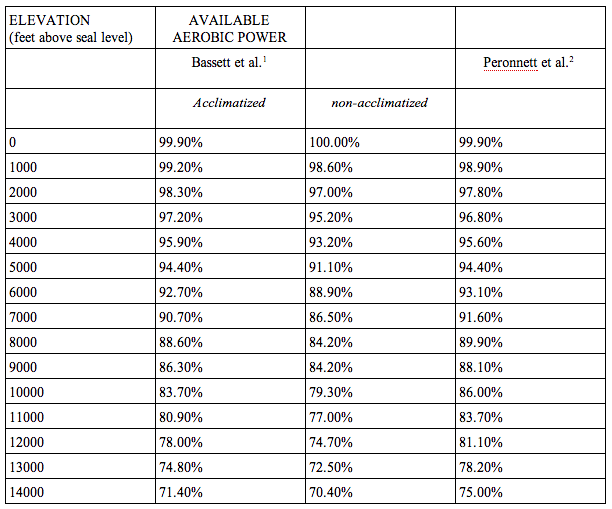 Power does go down as altitude increases. But the offset is air density decreases in parallel (to a point). And this is the reason why many hour records have been attempted at altitude. The optimum is apparently 3500m. Whereby the increase in speed outweighs the loss in power. Hence the popularity of the velodromes in La Paz (Bolivia) at 3400m and Mexico City velodrome at 2230m.

8
How to measure calories burned?
20
How can one estimate drag for a bicycle?
1
Which are better for reproducible power output: Mag- or Fluid-trainers?
3
Is the real world experience of riding a light bike understated by physics-based calculators?
3
What's the difference between power meter and bike computer?
1
Does changing gear relation produce different speed at same applied power?
4
Preparing for Alpine riding
24
Pedaling at different gear ratios on flat terrain: what's the point?
2
Power output on rollers doesn't seem to match perceived effort
1
How to interpret Strava power curves?