Purpose of this hinge component found on the pinch-bolt of front brake?

I'm thinking that it provides extra tension to the brake line. Would this hinge be set in it's "down" position when installed (as seen in the picture)? If so, wouldn't that be considered a risk in the case that if the hinge flips up during rides, the cable gains slack, thus losing brake-pulling capability? 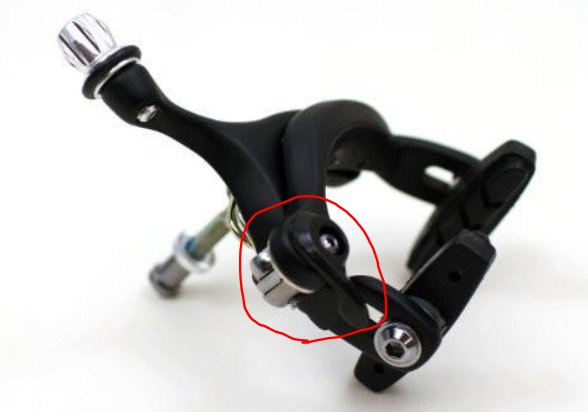 The lever pointed down is in the closed position and is how the manufacturer intended for the brakes to be used. The brake pad clearance should be set in this position. If the brake cable is routed correctly and the lever fully closed (and not damaged), tension on the brake cable will further lock the mechanism in place as it is on a slight angle causing the lever to be further pulled closed under braking tension.

The lever in the up position opens the caliper arms up wider to facilitate wheel changes.

Some people flip up the lever as a lazy way to get extra brake pad clearance when the rim gets out of true, but it isn't the best idea. That said, the brakes will still work, but are generally less effective with the lever positioned up.

It's a quick release to allow the brakes to open wide enough for the tire to pass through when you are removing the wheel. I've never heard of it being accidentally activated while riding; the only danger I know of is forgetting to reset after you've put the wheel back on (in which case, as you supposed, the brake in question will either not work at all or be very feeble).

The rear brake will have the same lever, unless you have mismatched brakes, which is vanishingly unlikely.

Not the answer you're looking for? Browse other questions tagged brakes front or ask your own question.